Derec Smith (right) and the Bad Influence 350H race side by side in quest for the ABPA High Points Championship. Dave Shea/The Journal 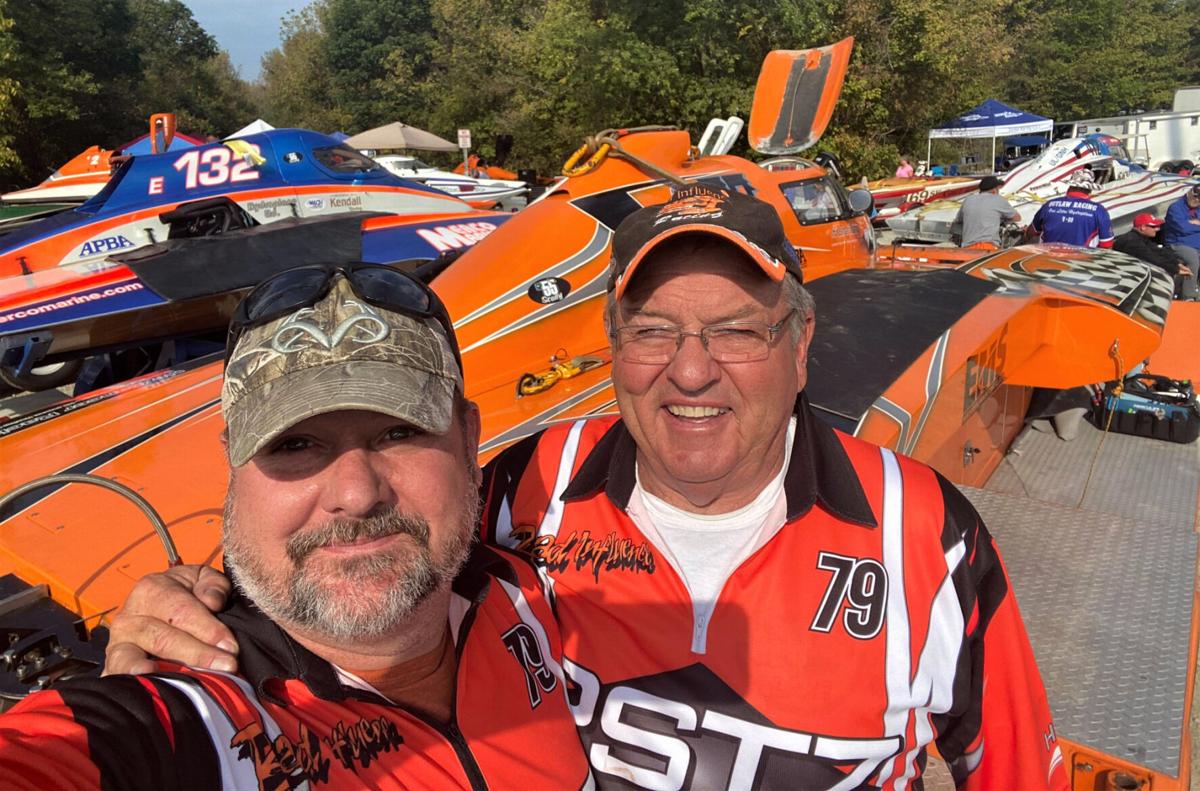 Derec Smith and his father, Dave, have been a team and switched driver and crew member roles over the years. Provided Photo

Derec Smith (right) and the Bad Influence 350H race side by side in quest for the ABPA High Points Championship. Dave Shea/The Journal

Derec Smith and his father, Dave, have been a team and switched driver and crew member roles over the years. Provided Photo

Derec Smith first got behind the wheel of a race boat as a youngster looking to imitate his dad, Dave Smith, who was a successful hydroplane racer in the Canadian-American circuit.

Derec started the process of following in his dad’s propeller wake when he raced a boat he borrowed from a family friend at age 14. From that time, the veteran driver from Ogdensburg has been racing at various levels until finally settling into the 350 Hydroplane Class in the Hydroplane Racing League, which stages regattas at American and Canadian venues.

All that came to a dead stop when the cloud of the COVID-19 pandemic sent much of everyday life into a virtual dark age.

“I was going nuts. For the first time since in many, many years I couldn’t race or be around races because there wasn’t any,” said Smith, who has lived in Oswego since he landed a job after graduating from college.

COVID shut down the HRL in 2020 and the league didn’t restart this year.

But with the help of Mike Grendell, who owns the Bad Influence Racing team with a Grand Prix and 350 Hydroplane boat, and the sponsorship John McDonald, H8 Cancer Racing and EMS, Smith was able to return to racing this season.

The HRL was inactive but the American Power Boat Association returned at full speed hosting races from J-Stock Hydro for youth drivers to the massive Unlimited and Off Shore boats.

APBA races are held all over the country and racers from all regions of the racing world compete for the prestigious High Points Championship in each class.

So when 350 Hydro races began in the Seattle area in the spring the Bad Influence boat was there.

“I couldn’t go out West until I got my shots. So Jeff Bernard, who drives the Bad Influence Grand Prix boat, drove in the early races and did very well,” Smith said.

Smith was able to make the trip to Seattle for the Tri Cities Regatta in May and placed second overall. Then the Bad Influence Team went to the Owensboro, Ky., Hydrofest, which was plagued by logs and heavy duty debris in the Ohio River after a hurricane.

The 350 Hydro action was reduced to one heat with the winner also winning the North American Championship. Smith won the race and the coveted title. The tour moved to the historic Hampton Cup Regatta in Virginia and Smith earned an overall third place.

A trip to the Caesar’s Creek Regatta in Ohio saw Smith roll to overall second.

“Originally Caesar’s Creek was going to be my last place but we had done so well that the boat was just 200 points from the high points lead. The points go to the boat so the points that Jeff Bernard won early in the season were really important. It definitely was a team effort,” Smith said.

“You can earn up to 400 points in one regatta so we decided to go to the final race of the season in Lakeland, Fla. (this past weekend) and go for the title.”

Results of the weekend races were not available in time to be published in this article.

“It as been a really exciting season,” Smith said. I had to learn how to fight for lanes again because lanes are assigned in the HRL. The 350 Class is great racing because there are a lot of boats and a lot of side-by-side racing.”

And ever since he ran his first race in a borrowed boat at age 14, Derec Smith will share the excitement with his family. His dad, Dave Smith, has been a fixture on his team since race one.

“I have been very lucky. So many people have helped me over the years.” said Derec Smith, who wished to give a shout out to Dale and Gizelle Wells of Ogdensburg.

“Dale and Gizelle haven’t been able to make the races this season. But they have been with me since day one and I really appreciate what they done for me. So many people have helped me.”