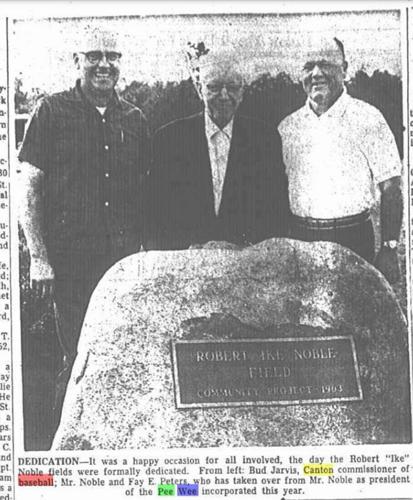 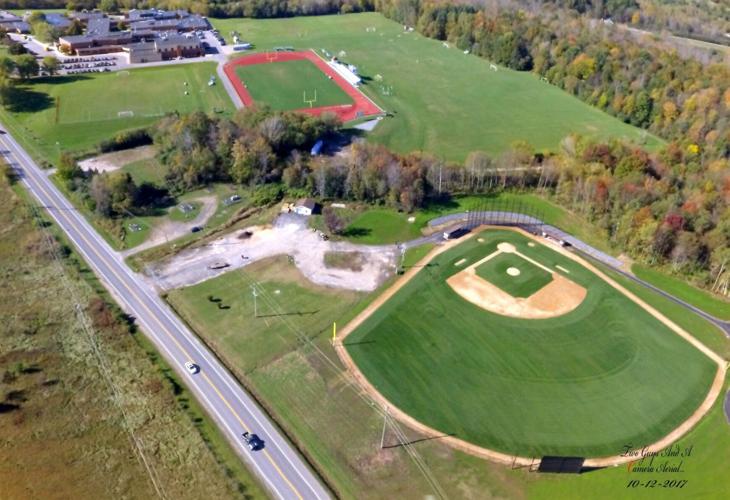 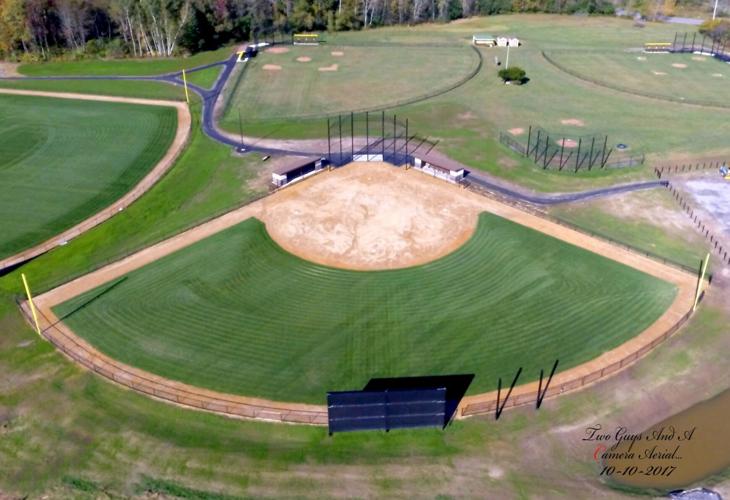 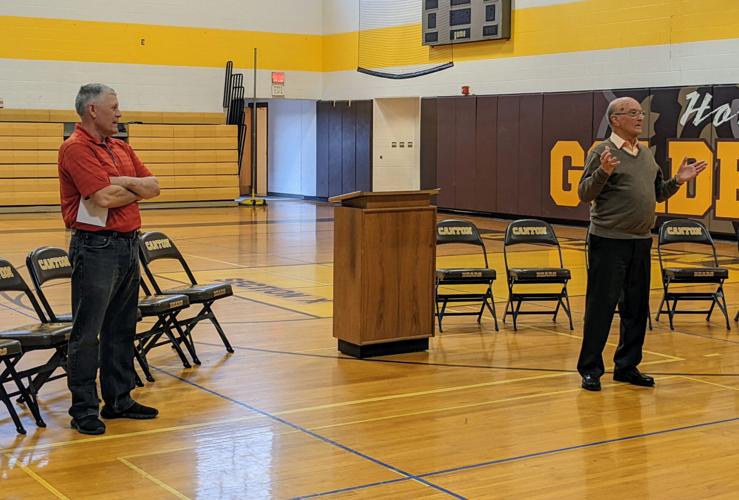 Bernie Proulx, right, talks about his time as a baseball coach at Ike Noble will Dan Huntly looks on. Tom Graser/Plaindealer photo 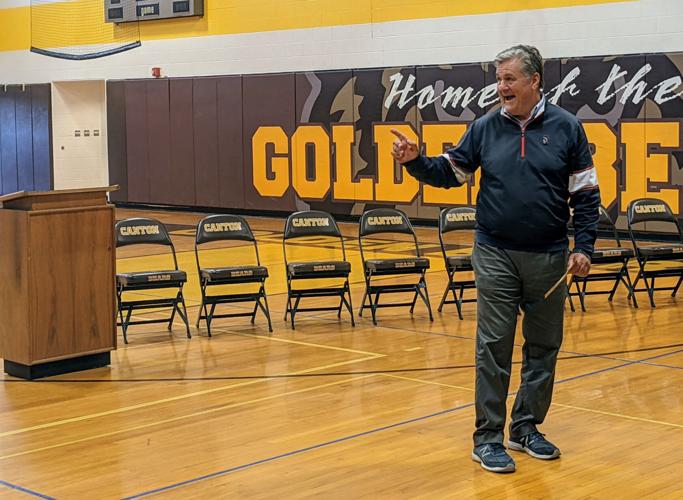 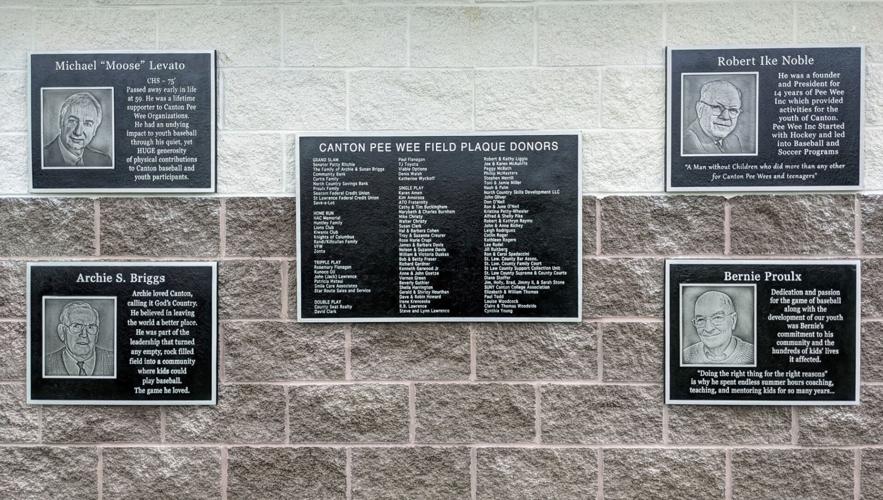 The Plaques honoring four men who went “above and beyond,” in the establishment of the Ike Noble Fields. Tom Graser/Plaindealer photo 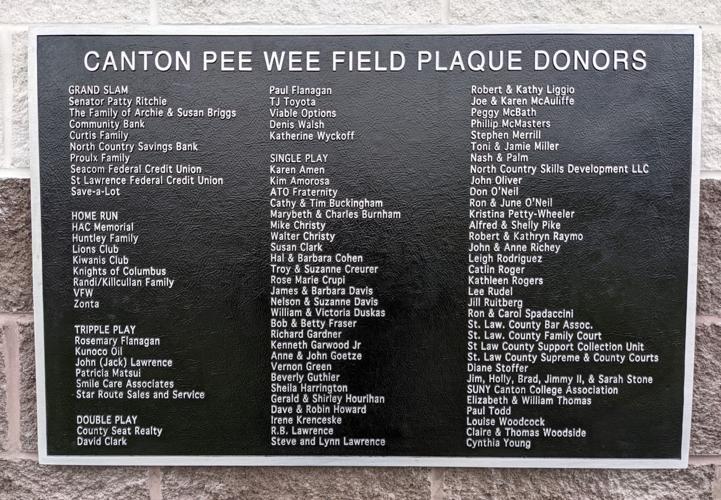 A list of donors on the concession stand at Ike Noble Fields. Tom Graser/Plaindealer photo 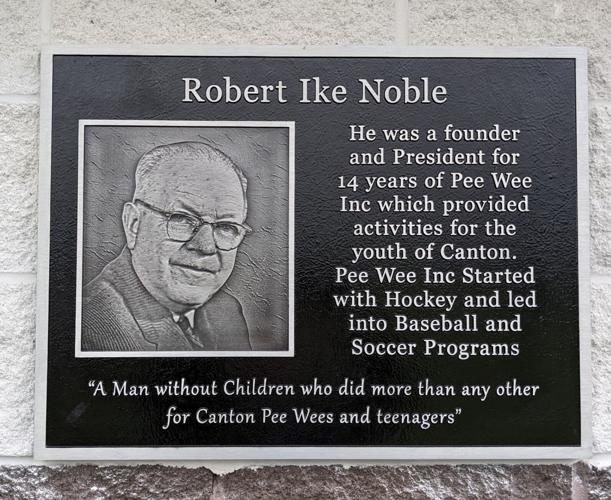 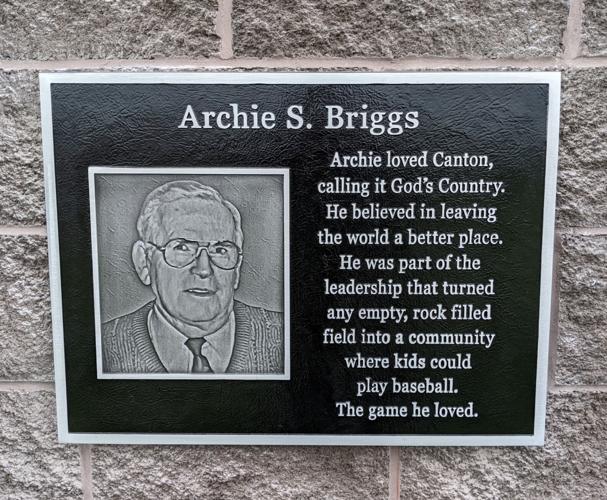 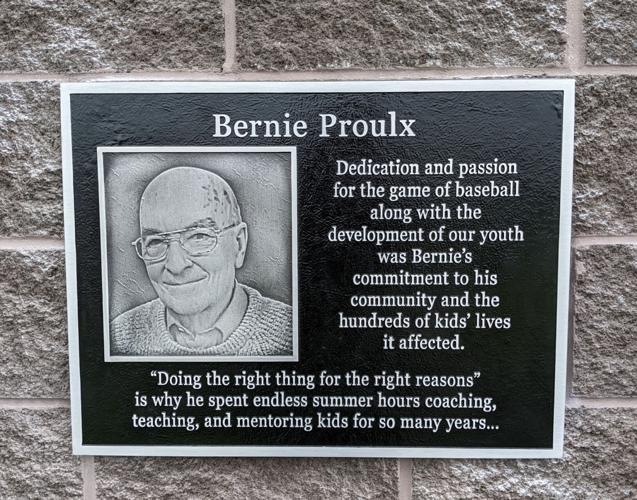 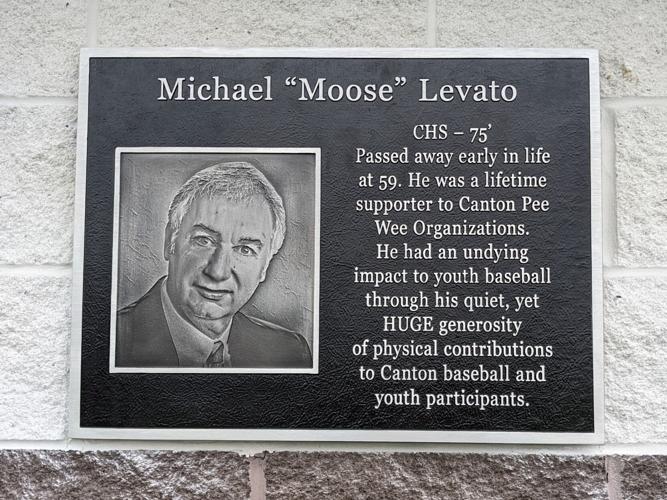 Bernie Proulx, right, talks about his time as a baseball coach at Ike Noble will Dan Huntly looks on. Tom Graser/Plaindealer photo

The Plaques honoring four men who went “above and beyond,” in the establishment of the Ike Noble Fields. Tom Graser/Plaindealer photo

A list of donors on the concession stand at Ike Noble Fields. Tom Graser/Plaindealer photo

CANTON — Robert I. “Ike” Noble is a name common to the baseball and softball community at Canton Central School. The original sign now rusted with years of weather clings to the fence at the entrance to the updated Canton Golden Bears Softball Facility. The sign pays homage to the history of a man who had a vision to provide a safe place for the youth of Canton to play ball. It is safe to say that Mr. Noble’s dream of those fields has been achieved. Mr. Noble’s legacy was summarized eloquently in his obituary published in the Oswego Palladium in the April-June edition of 1969.

A synopsis of his obituary includes the achievements of a man who clearly enjoyed sports throughout his life. A native of Hermon, Mr. Noble attended Canton Public School and went on to attend St. Lawrence University. A proud Laurentian, he was a letterman in four sports and was one of only eight individuals at that time to have achieved such an honorable endeavor. As a member of the Canton community, Noble was a prominent businessman, serving on the Canton Chamber of Commerce, spent a dozen years as the Canton Club President and led the Canton Pee Wee Inc. for many years as well. Needless to say, he was a man of respect to hold these esteemed positions for many years during his life.

Ike, along with several other sports community stakeholders had a vision of providing a place to gather and play youth baseball in Canton. They chose the site next to the entrance to what is now the Partridge Run Golf Course and United Helpers on Sullivan Drive.

Like any idea becoming a plan and plan becoming a project, Mr. Noble solicited the help of other prominent community members who shared a similar passion for sports and for the youth of our Canton community.

Names like Mike Maroney, Fay Peters, Bud Javis, Tony DeMaio were just a few of his “ go to” community supporters at that time. Once the original project was constructed in 1963, community ball field stakeholders evolved.

Many local sponsors had participation for team support along with volunteer team coaches. As time moved forward, new generations of community participation evolved.

The most recent baseball community leader contributing “above and beyond” was Micheal “Moose” Levato. Like any community endeavor, there were surely more people that were involved and deserve recognition.

As the Ike Noble plan was put into action, the field was literally shoveled out of the empty meadow as many community members invested their dollars, their sweat and many blisters to see the space leveled and set up for baseball.

The area was formally adopted as the “Robert Ike Noble Field’’ and a large stone commemorated by a bronze placard was placed on the site noting the “Community Project of 1963”.

The Canton community enjoyed the fruits of their labor for many decades to come. Hundreds of baseball games and thousands of boys and girls played on the site which eventually evolved into the home of the Canton Softball teams as well. It is safe to say that many friendships have been formed as young people have developed their love of baseball and softball at the site. This was due in large part because of the vision of Mr. Noble and the support of his friends, sponsors, and community participation.

In the spring of 2015, then Canton Pee Wee Association President Mr. Matthew Randi spearheaded a campaign of volunteers to improve the existing site. The idea came about when Mr. Randi and longtime Canton Recreation Department Director John Taillon, and Sherry Stone the commissioner of baseball were “persistant” regarding the need for permanent restrooms on site and permanent field repair.

The “Porta-Johns” had served their purpose but an upgrade was required. Although this more extensive project continued to be discussed, Mr. Randi took immediate action to address some of the fields safety concerns and field playing conditions. Mr. Randi was determined to drive the concept of a fund raising concession stand with modern womens and mens bathrooms to a position of reality.

With contributions from the VFW, Kiwanis, Knights of Columbus, and Lions Club, and community individuals, much needed sand, clay and other materials were provided to improve the condition of the fields.

Like many years prior, volunteers once again tore their shovels into the ground to create new cut-outs, level the fields, and in general, give the space a much needed facelift. As the second long day of work ended on that weekend in late April, the volunteers sat around enjoying a slice of pizza and cold drinks,dreaming of the possibility of a much larger scale project.

An improvement that would not only better the conditions beyond their weekend effort, but a place where future generations could play ball with Golden Bears Pride as well as a facility that would support concession stand fund raising for future organizations.

Those ideas circulated throughout the community and eventually momentum and grew into the planning stages of a much larger scale capital Improvement of the facility by Canton Central School.

In 2017 the Canton Board of Education under the leadership of then school superintendent William Gregory and Buildings and Grounds Director Scott Sanderson approved and broke ground on a comprehensive capital improvement which was supported by community voters. The plan was to create a new baseball diamond and improve all of the existing fields. New fencing with protective capping, batter’s eyes, scoreboards, electricity, water, new dugouts and many other essentials were planned and constructed.

The facility quickly became the envy of the north country as the ballfields are beautiful and offer an abundance of possibilities for tournaments, sectional events, high school athletics and youth games well into the future.

The one item missing from this project however, was a central restroom and a concession stand. Once again Mr. Randi rallied community support as he solicited enough dollars to get a project off the ground.

In order to comply with New York State Education Department Policies, as well as compliance with the N.Y.S. Department of Health, another capital project was initiated. A site was chosen and a design was provided by Tisdel and Associates Principal Engineer Mr. Michael Christy, a longtime baseball and softball supporter himself.

Construction began on this facility in 2019. Recent significant donations to the PeeWee association will be used to acquire professional cooking and refrigeration equipment approved by The Department Health for long term use within the concession stand. We hope to have the first use of this stand for the June 3rd rededication ceremony.

The passing of Judge Mike “Moose” Levato was a large impetus for many of the donations which were collected. Moose was a longtime modified baseball coach at Canton Central and the son of the original “Moose” Levato who was a founding contributor with Mr. Noble.

Coach Mark Mende recounted his time with Judge Levato. “Nearly 20 years ago, when I was still coaching at Potsdam and was on the Canton PeeWee Board, Moose told me I should take the Canton modified job. I told him I’d take it if he helped. A few months later, I got the job and he agreed to be my volunteer assistant. For 11 years, we worked together, and over the course of that time he taught me that what happened off the field for the young men we were coming in contact with was much more important than the wins and losses. I became a better coach because of him.”

Legacy through the generations and community continues to be the theme at the ballfields. Current Softball Coach Mike Wentworth recounted his days as a young boy playing ball in Canton for his own father Dave Wentworth and other prominent coaches of that era. He now leads the Canton Central Softball program with his own daughter and former collegiate standout softball player Kacie “Wentworth” Brabaw.His son Bryant is also a baseball coach at nearby Heuvelton, a former collegiate player himself. These are just a couple examples of the many ballfield legacies and the trickle down impact of Ike Noble’s vision.

Suffice it to say, the bases which were laid out by one man’s dream of fields long ago have been filled by the community time and time again.