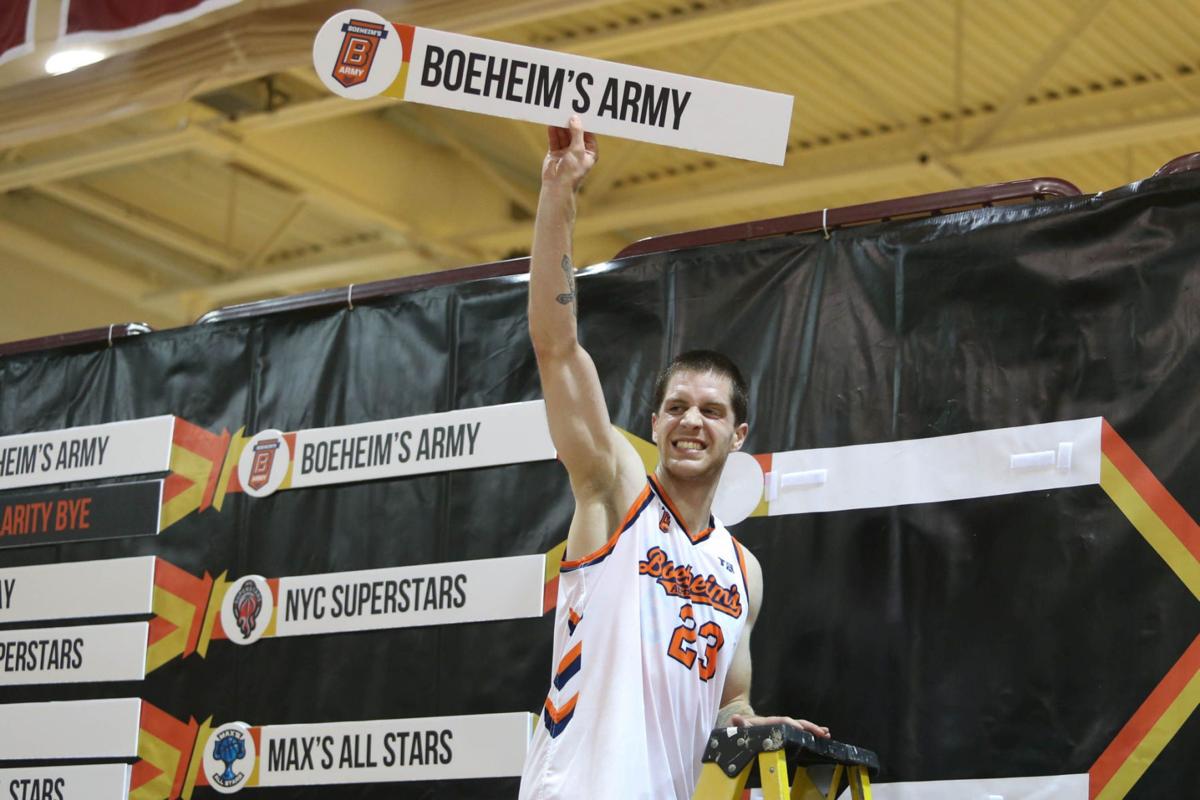 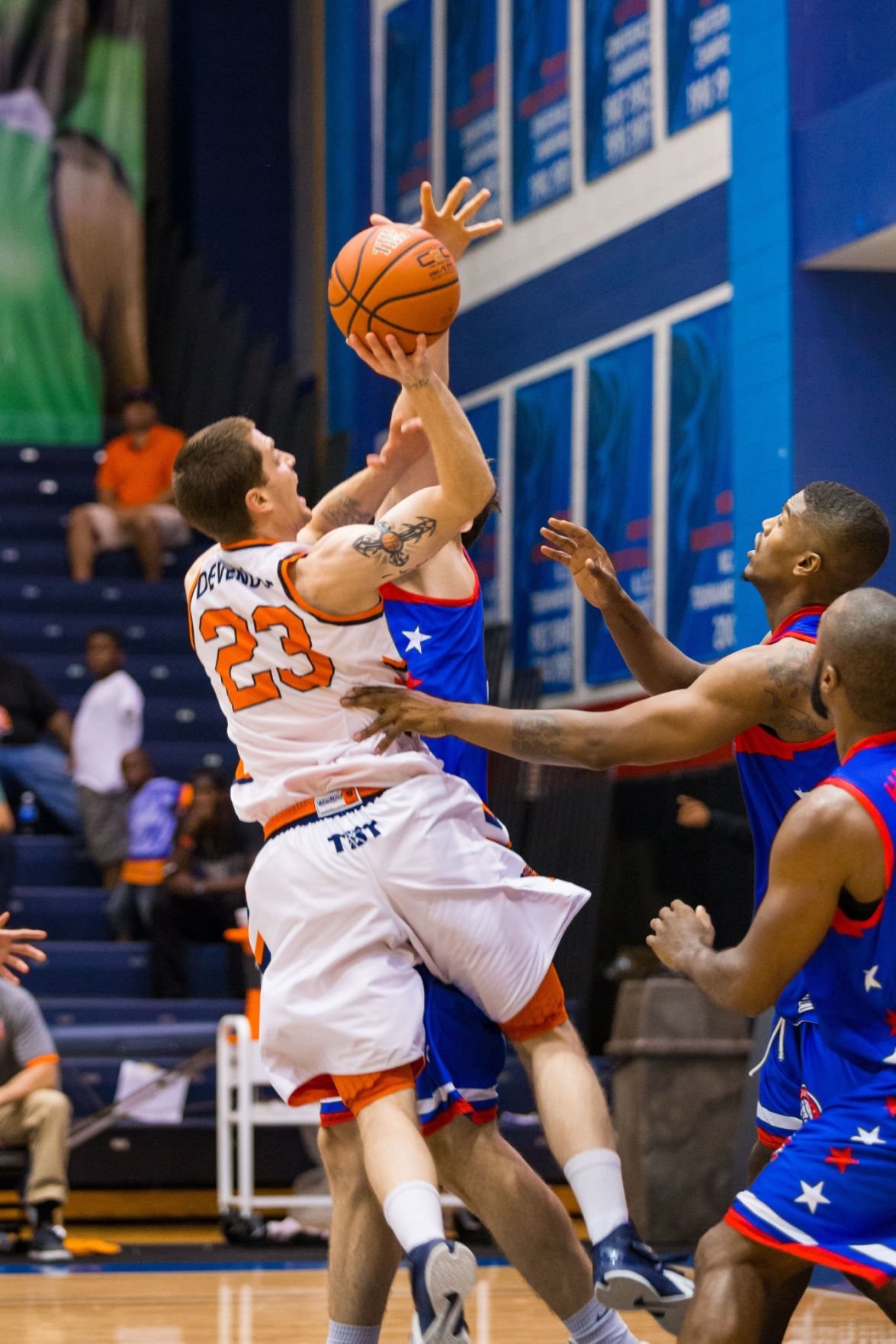 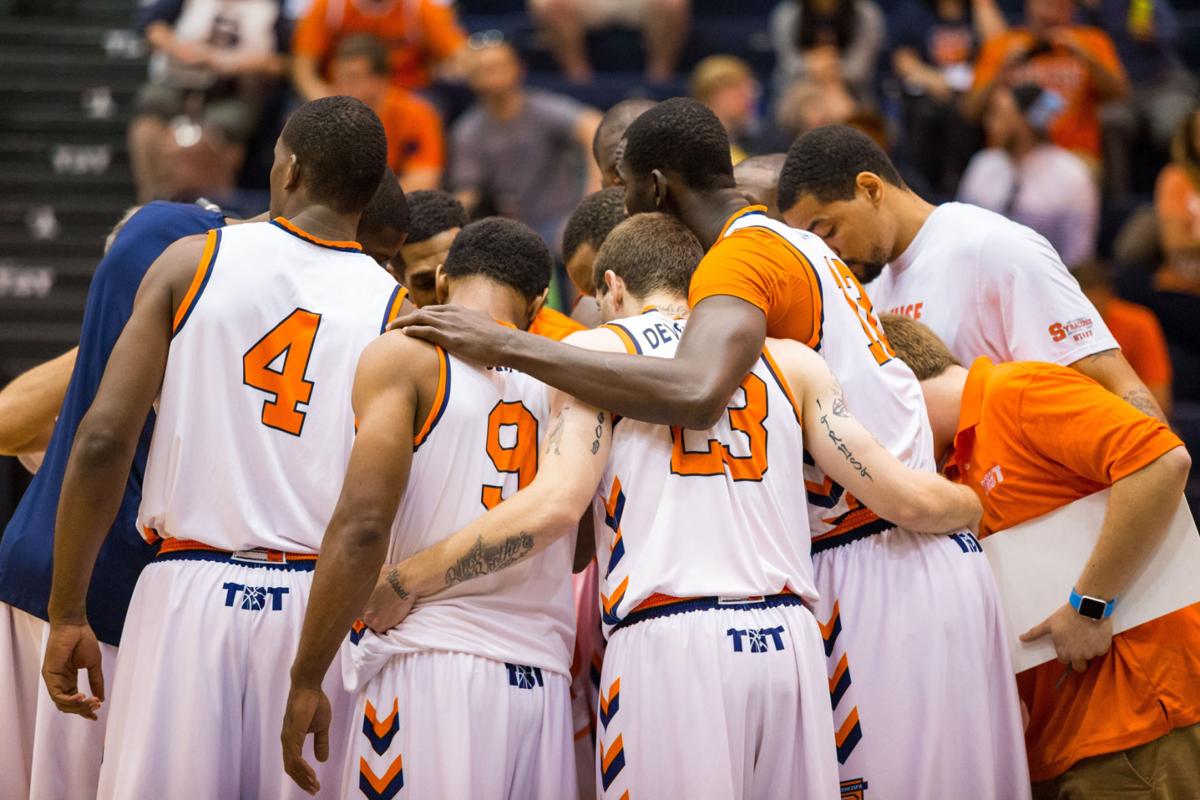 The Boeheim’s Army team huddles during a recent game in The Basketball Tournament. The SU alumni team will compete in this year’s event starting July 4 in Columbus, Ohio. Photo provided by Kevin Belbey. 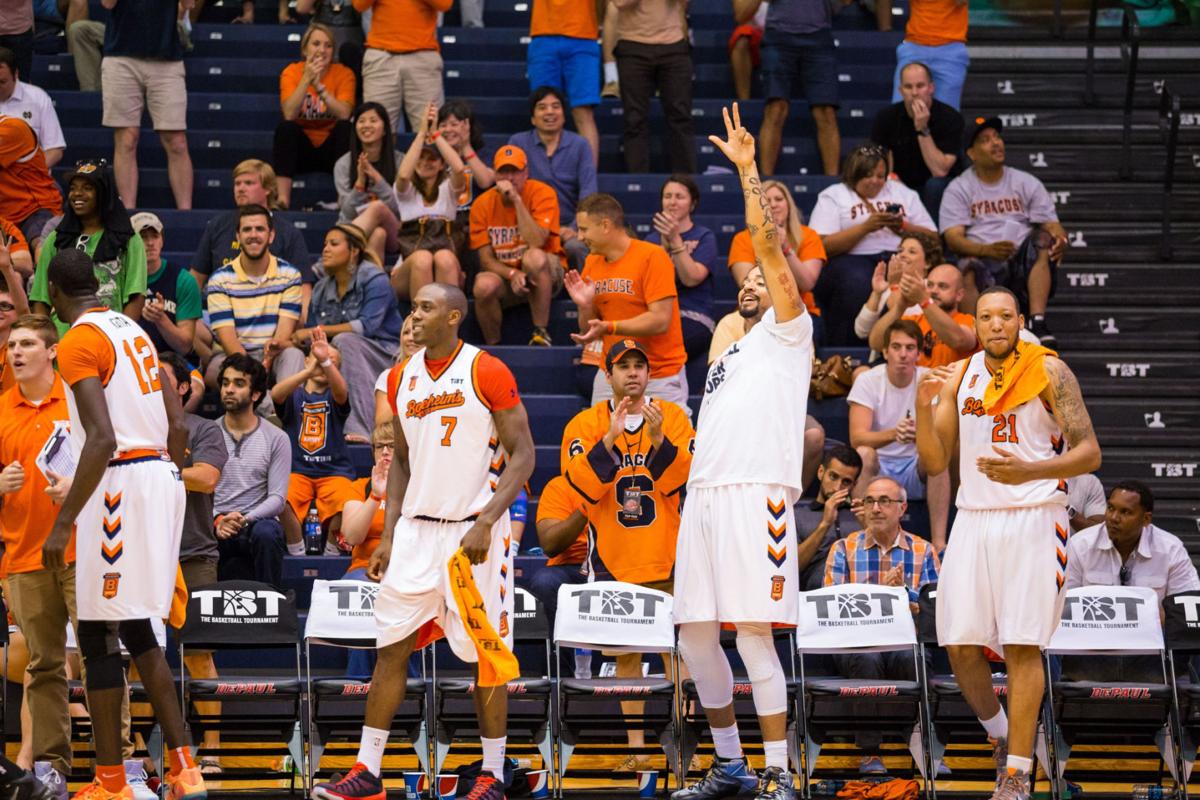 The Boeheim’s Army team reacts to a play during a recent game in The Basketball Tournament. The SU alumni team will compete in this year’s event starting July 4 in Columbus, Ohio. Photo provided by Kevin Belbey.

The Boeheim’s Army team huddles during a recent game in The Basketball Tournament. The SU alumni team will compete in this year’s event starting July 4 in Columbus, Ohio. Photo provided by Kevin Belbey.

The Boeheim’s Army team reacts to a play during a recent game in The Basketball Tournament. The SU alumni team will compete in this year’s event starting July 4 in Columbus, Ohio. Photo provided by Kevin Belbey.

The Syracuse Orange will have strong representation when live basketball games return to national TV for the first time in nearly four months on July 4.

The SU men’s basketball alumni squad named “Boeheim’s Army,” will compete in the seventh annual ‘TBT,’ The Basketball Tournament, that will be played under quarantine from July 4-14 at Nationwide Arena at Columbus, Ohio.

The single-elimination bracket is comprised of 24 teams — typically consisting of a blend of professional and amateur players with past connections, all at least 18-years-old — competing for a $1 million, winner-take-all prize.

All games are scheduled for live broadcast on the ESPN networks, and the event will mark the first live televised action in the sport since the COVID-19 pandemic shutdown all leagues in mid-March.

“I think the guys are ready to get back in the gym and excited to compete again and get a chance to be on ESPN, and bring some normalcy and bring a lot of positive energy back to our community and to the country,” said Ryan Blackwell, who scored 1,175 career points for SU from 1997-2000 and will coach the squad for the fifth straight year.

Boeheim’s Army received the No. 3 seed and a first-round bye when the bracket was unveiled Tuesday.

They are slated to begin play July 7 and open against the winner of a first-round game between No. 14 Heartfire and No. 19 Men of Mackey, which consists of ex-Purdue players.

The Orange alumni is highlighted by team veteran Eric Devendorf, an SU guard from 2006-09 that ranks fifth in program history for most career 3-pointers (208) and is the only player that has played for Boeheim’s Army in each of the past five years.

Kevin Belbey — the general manager and founder of Boeheim’s Army who served as team manager for SU men’s basketball from 2009-13 — said that he enjoys being able to turn back the clock and blend various generations of SU standouts when forming the teams. He also believes that the unique TBT allows players that left the program early to pursue pro careers a rare chance to wear the Orange again.

“It’s a dream job for me and I try to think of it from the perspective of, what’s the best roster we can have, but I also want to make it fun for the fans,” Belbey said.

“As a fan myself first, I can’t wait to see some of these guys get together, particularly some of the younger guys. … We have guys who have made good money in the NBA and made the right decisions for their careers, but at the same time, guys you still wish could have had more time in orange and I think in a perfect world, they would have wanted that, too, and this sort of allows that to happen.”

Boeheim’s Army has consistently been among the most popular teams since joining the TBT in terms of attendance and fan support but is chasing its first title. The top seed for the upcoming tourney is defending champion Carmen’s Crew, which is made up of former Ohio State players, and the second seed is Overseas Elite, which will be led by retired NBA veteran Joe Johnson and several former St. John’s players. That squad won four straight title from 2015-18.

The trio of top seeds and returning favorites will face unique challenges in the adjusted format and coinciding series of health and safety guidelines due to COVID-19 that was announced May 27.

The event was reduced from 64 to 24 teams and various scheduled host sites, including a return to Onondaga Community College’s SRC Arena in Syracuse, were scrapped in favor of the 10-day, single-location setup.

Players will be tested and quarantined upon arrival and any positive tests will result in the disqualification of a player. For teams that gathered prior to arrival, a single positive test would result in the team being removed from the event. All teams will be separated and screened throughout the 10-day period.

Belbey said that, even under restrictions and potential health concerns, he was flooded with requests to join the squad this year rather than his usual routine of recruiting former players. He added that each of the nine former standouts expressed a willingness to sacrifice minutes and would be accepting of playing any role to be part of the action.

“Normally I’m out convincing guys to play and trying to tell them it’s the best thing for them and that it will be a great opportunity, but now with everything canceled, everybody wants to play basketball and is itching and ready for an opportunity,” Belbey said.

“I think that’s what we need, as much as I like to convince guys to play, you want to have guys that want to play and that are invested and committed and that are all in,” he added. “Those are the types of players and teams that are successful and win in this tournament.”

Boeheim’s Army is entering with its deepest roster since the club was formed, according to Belbey and Blackwell. The lineup possesses size, versatility and elite shooting while sporting four of the program’s 24 first-round NBA draft picks, and seven of its nine players having garnered All-Big East or All-Atlantic Coast Conference accolades.

The backcourt will feature two career 1,500-point SU scorers — Triche (1,564) and Devendorf (1,680) — along with a pair of recent one-year standouts. Richardson, who made 79 total 3-pointers for the third-highest total by an SU freshman, and Gillon, who shares the SU single-game record for most 3-pointers in a game (nine) with four other players and ranks third in team history for percentage from deep (.419), are each signed.

The 6-foot-10 Lydon — who ranks eighth in SU history for career 3-point percentage (.395) and free-throw percentage (.809) — will provide a strong two-way interior presence along with the 6-foot-10 McCullough, who should provide rim protection and finished with 33 blocks in 16 career SU games.

The roster is rounded out with a trio of top-shooting forwards. Andrew White III, who set the program’s single-season record with 112 total 3-pointers in his lone season, is back along with Demetris Nichols, whose 205 career 3-pointers rank sixth in program history. Donte Green, who holds the SU freshman record with 90 total 3-pointers in his single SU campaign, which also ranks as the eighth highest total in team history, is another viable long-range threat on board.

The unit is also expected to utilize the 2-3 zone that each played at SU under coach Jim Boeheim.

“We have guys that are interchangeable,” Blackwell said. “They’re mobile and they’re athletic, and they can cover grounds on both ends.”

Boeheim’s Army has been meeting via Zoom video conference for several weeks, with the meetings expanding each time a new signee was announced. The unit typically holds a weeklong training camp in Syracuse before the TBT each year but will gather for the first time when they meet in Columbus to avoid spread of the virus and reduce potential for a full team disqualification.

“We have a good feeling,” Blackwell said. “I think the chemistry is great so far even though we haven’t gotten together in person, you can tell these guys are going to get along and they’re receptive to each other. I think they guys have bought in to the task.”

Belbey added: “We will have guys at the end of the bench that were probably the best player on their Syracuse team at one time, so we need guys to be able to buy into their roles and see the bigger picture. This is a winner-take-all tournament so even if you’re the ninth guy on our team, you’re getting paid the same amount as everyone else if we win, and if we’re in second place, no one gets paid a dollar.”

Players signed to compete for the SU alumni squad in the TBT, July 4-14 at Nationwide Arena in Columbus, Ohio.