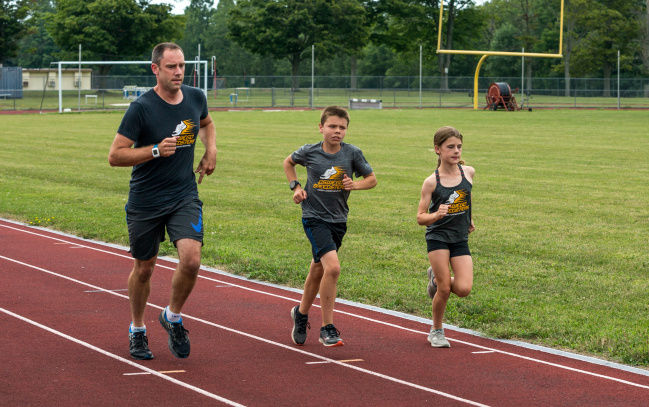 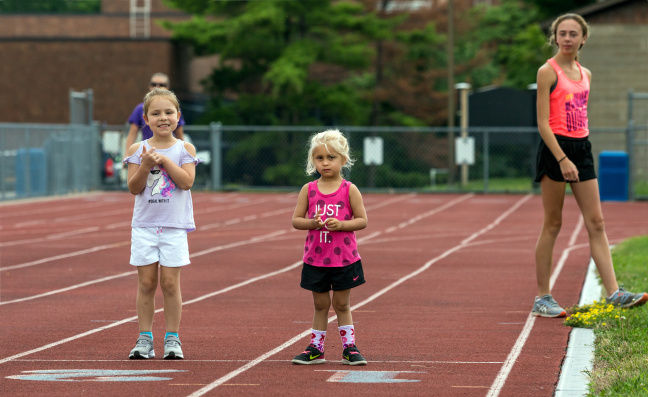 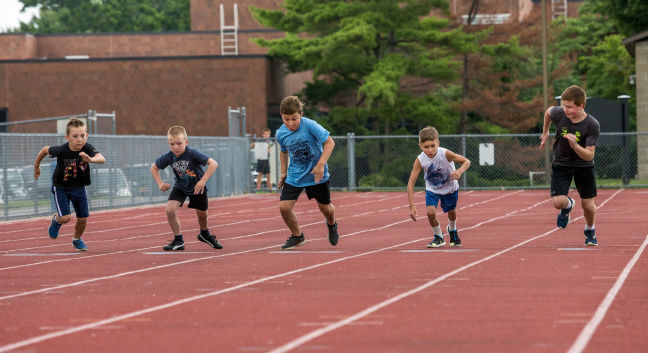 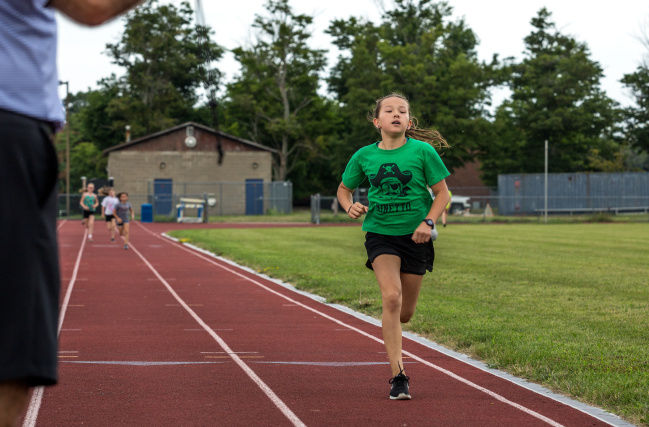 OSWEGO — Dominick Pike was eager to provide a fun track and field activity for Oswego-area kids this summer, and filled the void laudably with the launch of open family track meets.

Pike — the varsity indoor track and field coach at Oswego High School who has taught the sport since 1981, including a 37-year stint at Hannibal — hosted the third and final family track meet of the summer last Monday at Oswego Middle School.

The event capped off a fun-fueled season of light-hearted competition open to anyone in the community, from precocious toddlers to current high school athletes, along with parents and grandparents.

“We just wanted something fun for the kids to try to make track fun again, and it helps our varsity program but also provides recreation for the youth in the community,” said Pike, who also works as an assistant coach for the Buccaneers cross country and outdoor track and field programs.

“This is what I love,” he added. “I love to see kids happy and running, jumping, throwing shot puts, or watching every kid go home and brag about their six ribbons, even though they’re all the same.”

Every youth runner that completes their respective race received a ribbon, and Pike recognized a group of five kids that attended each of the three track meets this summer with a medal prior to the final event.

Participants choose events to compete in each night and can partake in the 1,600-meter run along with the 200, 400, 100, 800, shot put and long jump. There are no age groups – races were only split if there are too many participants to fit on the track – leading to good-natured competition among family members of various ages.

Each meet ends with a relay race chosen by the participants. The Shaver family — consisting of parents Jon and Jill along with Madeleine and her 11-year-old brother, Andy — won a 1,600 medley relay to cap off the season last Monday.

Each family track meet this summer was attended by about 20-30 participants overall, and each created lasting memories for the attendees.

Pike recalled watching a three-year-old girl take off for her first race with her dad earlier this summer, and laughed as the girl kept stopping to glance over her shoulder to ensure her dad was running behind her. Pike also recalled times watching young runners step up to compete with more experienced counterparts, and witnessing young athletes soak up positive encouragement from onlookers and other participants as they finished their first races.

“You see that there is a lot of talent in the community and there are people enjoying it,” Pike said. “I think that people thought this was an exclusive thing for the track team in the beginning, but this is for the whole community.”

The easygoing atmosphere also appealed to first-time attendees like Terra Hsu, a former Mexico High School track and field athlete who raced with her two daughters and introduced them to her favorite event, the shot put.

“I was a little nervous about coming but I really, really enjoyed it when I came here,” said Lana Hsu, a student at Minetto Elementary School. “I was really happy, and I thought that everyone was really supportive and friendly. … I hope people come next year because it’s fun and a good way to encourage physical activity.”

Her sister, Kara Hsu, added: “I think it was pretty fun. I liked the shot put because it was my first time ever trying it.”

Pike said that he plans to host the family track meets again next summer and hopes to do so annually.