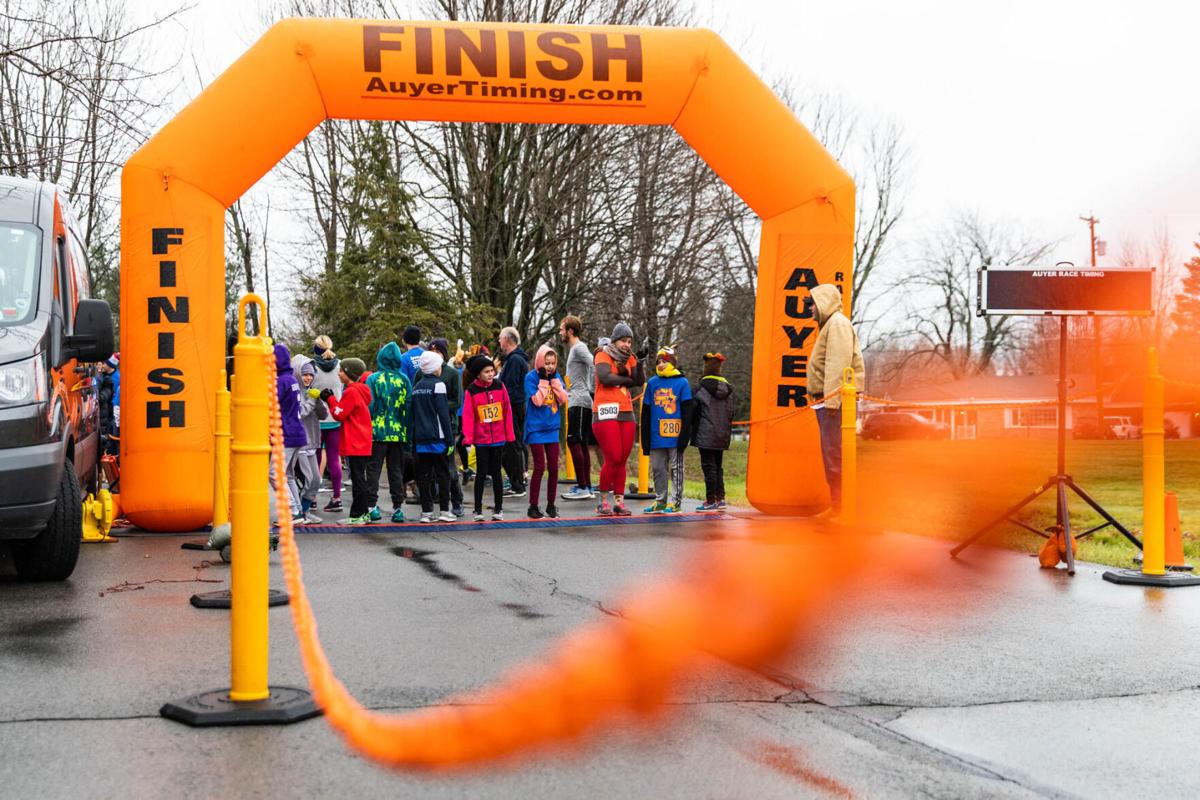 Runners line up at the starting line of the YMCA’s Turkey Run in 2019 at the The Church of Jesus Christ of Latter Day Saints in Watertown. Sydney Schaefer/Watertown Daily Times 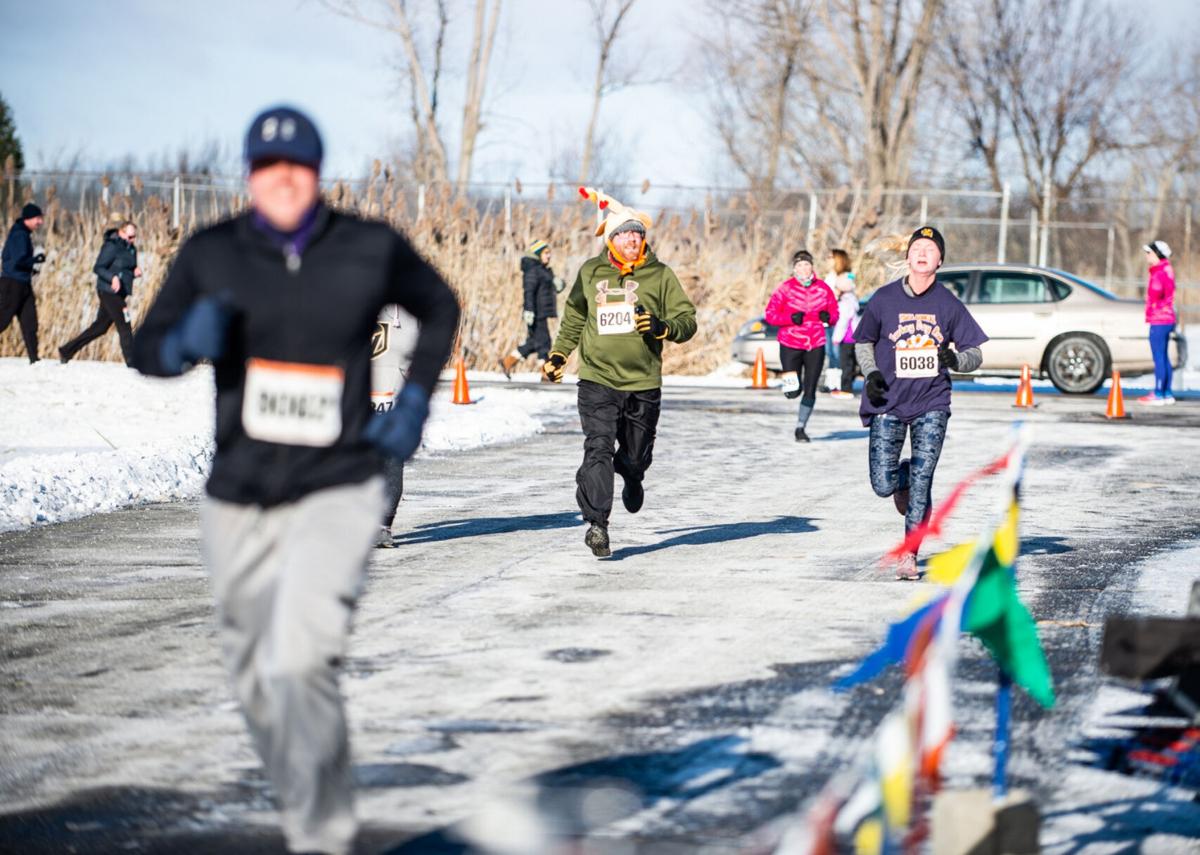 Christopher Botsfo wears a turkey moments before crossing the finish line while running a 5K in 2018 during the YMCA Turkey Run at The Church of Jesus Christ of Latter Day Saints. Watertown Daily Times

Runners line up at the starting line of the YMCA’s Turkey Run in 2019 at the The Church of Jesus Christ of Latter Day Saints in Watertown. Sydney Schaefer/Watertown Daily Times

Christopher Botsfo wears a turkey moments before crossing the finish line while running a 5K in 2018 during the YMCA Turkey Run at The Church of Jesus Christ of Latter Day Saints. Watertown Daily Times

Thanksgiving features a plethora of yearly traditions, but some traditions, like turkey trots, are changing with the times.

Races like the YMCA’s Turkey Trot in Watertown and Lowville’s race sponsored by Double Play Community Center are adopting different formats due to the coronavirus pandemic.

The Watertown event has gone to an entirely virtual format for this year in something called the Turkey Rock Run.

COVID-19 already claimed the Shamrock Run back in March and organizers were looking to hold the postponed event when it was safe enough. New York state’s shutdown orders happened just days before the Shamrock Run was supposed to take place. Some runners had already gotten their packets with their T-shirts for the race. The YMCA looked to hold the event over the following months, but conditions didn’t allow that to happen.

“We postponed and we tried running it all summer, but we just weren’t able to do that,” race organizer Stephen Rowell said.

But those who had entered the Shamrock Run have automatically had their entry transferred over to the Thanksgiving week event. The Turkey Rock Run name is an amalgamation of the Turkey Trot and Shamrock Run.

“We just came up with it and Victory Promotions came up with a nice logo,” Rowell said. “Our race company just moved everyone’s registration over.”

The logo ties both races together, showing a turkey running with a leprechaun amid a mix of green shamrocks and leaves on a gold background. There’s an option on the YMCA’s website for people to buy the T-shirt with the new logo.

“We think (the shirts) will be a great novelty,” Rowell said.

The current pandemic has wiped out many races. A few events were held over the summer when cases were lower, but the recent surge has tossed other races into doubt.

Rowell and other race workers will miss seeing those runners who return home to Northern New York from around the country. It’s something he looks forward to each year.

“One of the things for me is all the families, those familiar faces,” Rowell said. “I see a lot of people that come up just once a year and a bunch of my staffers share the feelings I have.”

Runners for the Turkey Rock run have from Nov. 25-29 to complete the race. The traditional 5K course that starts at The Church of Latter Day Saints on Ives Street is laid out and people can run or walk it in that time frame. Participants are asked to upload their time on the registration page to compete with other racers. People are then asked to post a picture and tag the Watertown YMCA Facebook page after their race is completed.

The YMCA will offer prizes in unique categories, such as “furthest socially distanced” where a group of runners upload pictures at different cities. There are also awards for costumes and completing the race while doing Black Friday shopping.

Runners can pick up their race packets at the Fairgrounds YMCA on Coffeen Street from noon-6 p.m. Nov. 23 and 9 a.m.-3 p.m. Nov. 24. Anyone that ordered a Shamrock Run T-shirt can pick that up during the same times at the same location. People can still sign up for the run as its $22 for YMCA members and $27 for non-members.

Lowville’s version of the Thanksgiving turkey trot is also changing. The run, which is sponsored by Double Play, is the ninth version of this race and helps raise money for the United Way Renee Beyer Memorial Fund. The event won’t be official and will be a socially distanced event with no admission fee.

“The goal is to allow people to get out and enjoy their Thanksgiving Day run/walk in a safe and healthy manner,” says a statement on the Lewis Country Chamber of Commerce’s web site.

People will be released every 15 minutes from 7:30-9:30 a.m. to ensure runners are staying a safe distance apart. Participants are also urged to wear a mask and be ready to go when they first arrive.

“This will not be an official event, but an opportunity for everyone to get out and run or walk,” the Chamber web site said.

The race normally has a $10 fee and a $50 maximum for families. However, they won’t charge a fee, but will have a donation box for the Beyer fund for anyone who wishes to donate.

Last year’s race saw 155 participate and has brought as many as over 170 out in the past. It will be held at the traditional spot at the Trinity Avenue parking lot at Lowville Academy and Central School, 7668 North State Street.

The event is asking that those who feel sick to stay home and also requesting that out-of-state participants bypass the event. Past races have included runners from Florida, California and other states around the country. For more information, call 315-376-7001 or visit www.doubleplaycc.com.