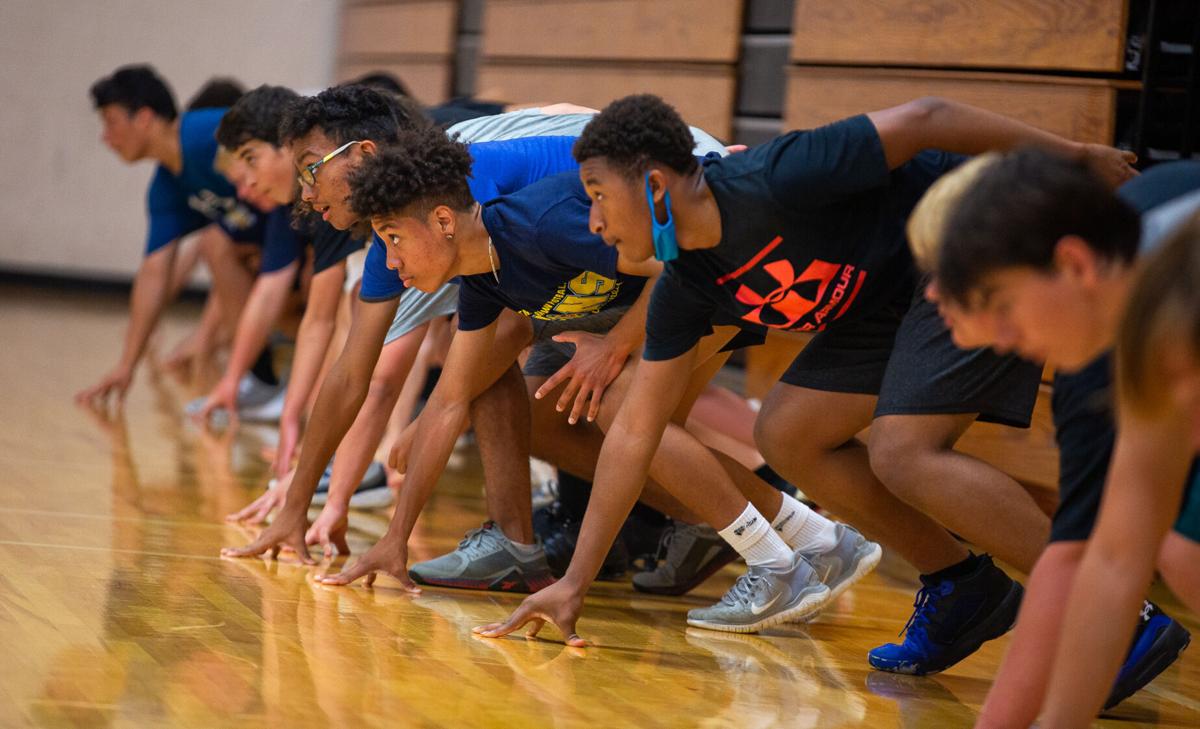 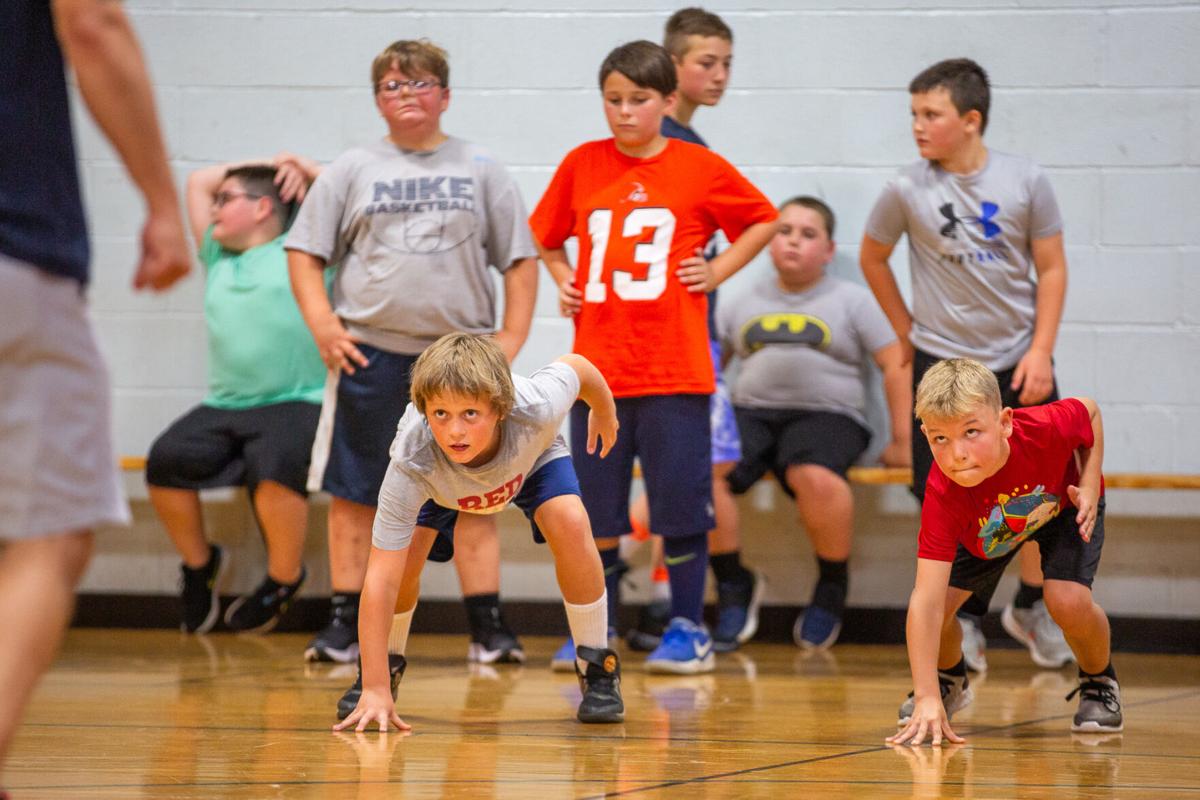 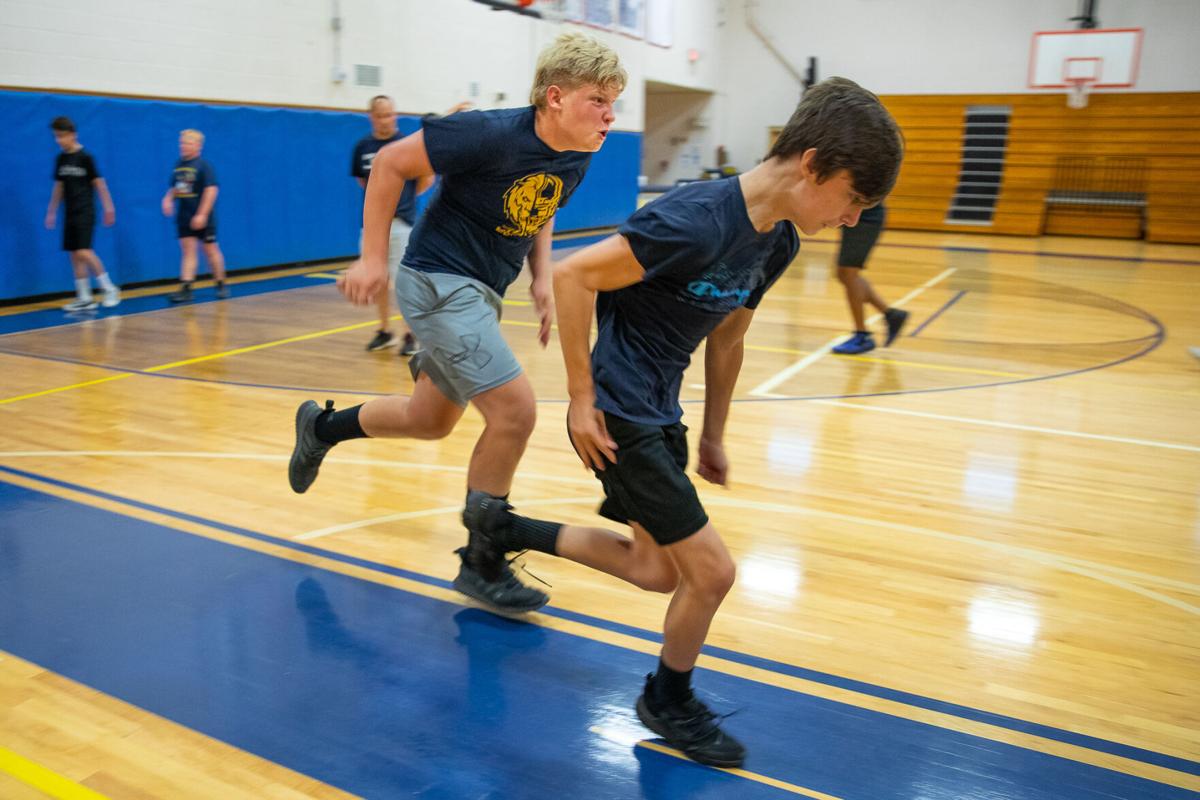 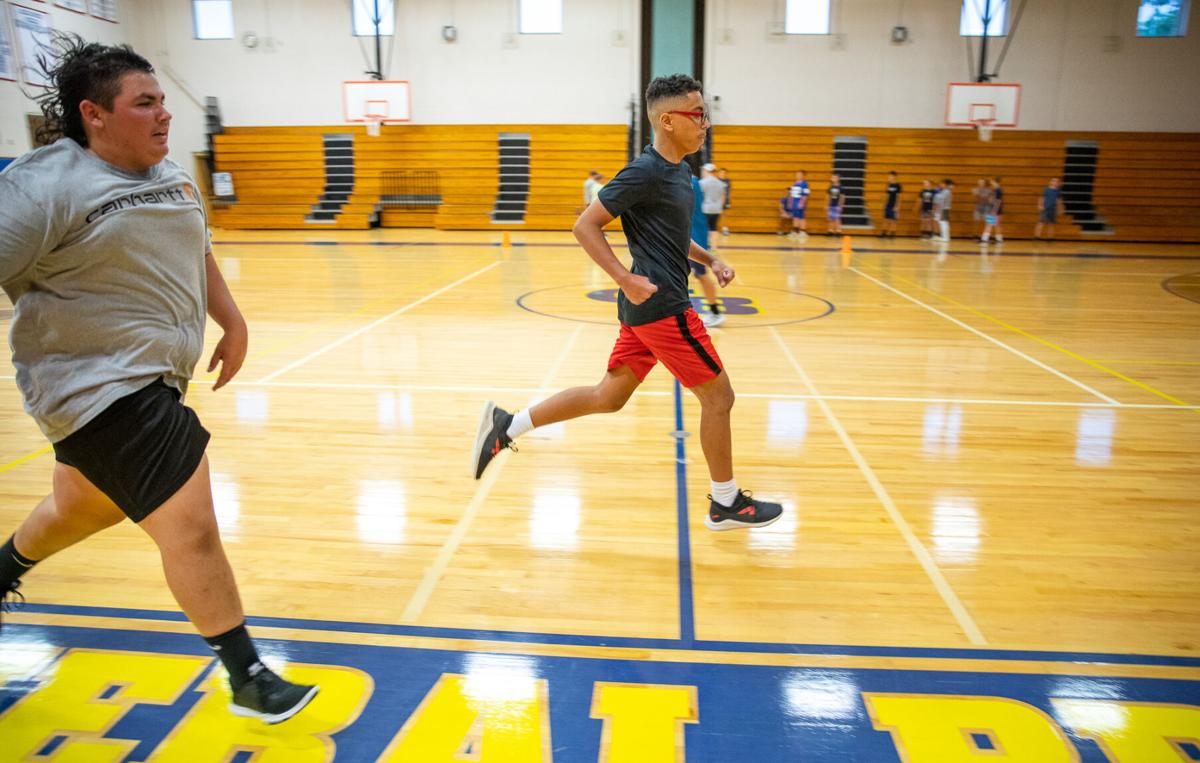 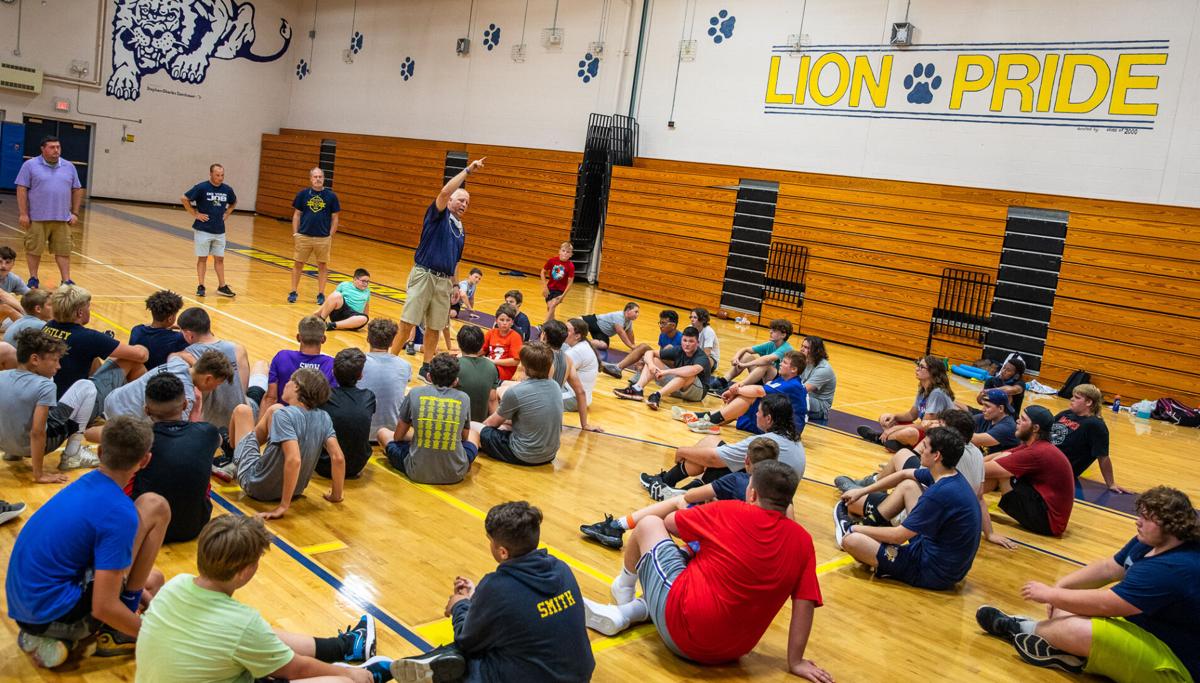 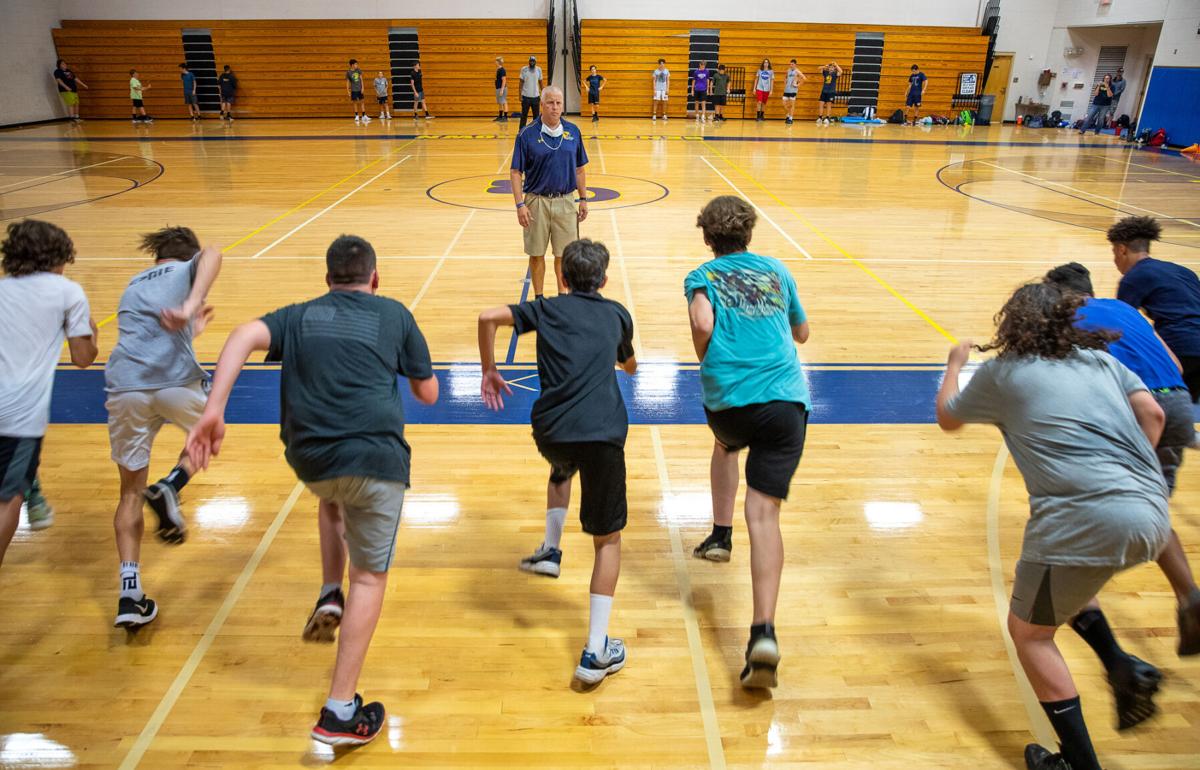 DEXTER — After nearly a year of no sports camps, Thursday’s rainy weather wasn’t going to prevent the nearly 60 athletes at the General Brown Football Camp from getting offseason work done.

The clinic is one of the first in the area to be teaching skills again after losing the summer of 2020 due to the COVID-19 pandemic. Increased vaccination rates and relaxing of pandemic rules have allowed clinics to resume and coaches like Lions varsity leader Doug Black is glad to see players of all ages back in the gym.

“It’s nice to finally see the kids again and get back to normal,” Black said. “It’s nice to have our normal summer schedule of getting the kids in two days a week.”

Players like Derian Salter and Brandon Jewett missed out on last year’s camp and played in an abbreviated season of five games that was moved to the spring. However, they are both excited to get back into the swing of their summer routine with the season less than two months away.

“I’m excited to be here because it means football’s around the corner,” Salter said.

General Brown’s campers would have been outside doing drills on the gridiron of Fisher Field, but thunderstorms forced the participants, ranging from grade school to high school, indoors. But there was plenty to do, from conditioning drills to work in the weight room.

“It shows how much these kids want to play football and be ready for the season,” Jewett said.

Many Lions football players have been accustomed to working on their own due to limits on crowd sizes. General Brown and other schools told players to conduct lifting and other workouts on their own. Despite the restrictions, the players found a way to get offseason work done.

“We were doing weight room stuff outside of the school and other things to stay prepared,” Salter said.

“It was a little packed, but we were able to use the outdoor courts and we had extra coaches because there are so many kids,” Robbins said.

Other camps open this week and throughout the months of July and August in a variety of sports. The Shot Doctor Camp, which is the second camp Robbins runs near the end of July, has limited spots available.

Robbins said he’s glad to work with the younger players because they’re so willing to learn.

“They come in like sponges and don’t have some of the bad habits older kids have (more often),” Robbins said. “We teach them the basics and how to shoot.”

“We wanted to try to help all the kids and not just the ones that go to South Jeff,” Randall said.

The Spartans camp and the upcoming Jefferson Community College camp that starts today are the two main camps for local softball players in the area. Randall relies on current and former players to be instructors at the camp.

“I always say that it’s easier to learn the game when you’re teaching it,” Randall said. “They enjoy it (being at the camp) as much as the ones they are teaching.”

Campers are wearing masks and practicing social distancing when they can. Randall added that the campers have easily adapted to COVID-19 protocols.

“They’re better at it (wearing masks) than I am sometimes,” Randall said. “A lot of them are two or three-sport athletes, so they’re just used to it.”

Camps in the area range from baseball, lacrosse, softball, football and volleyball. All the coaches agreed there was a large demand to get back out there and make up for lost time.

“I think we’re starting to see this summer where any kind of activity gets the kids back out there,” Black said. “The kids are just itching to get back out there and get back to normal.”