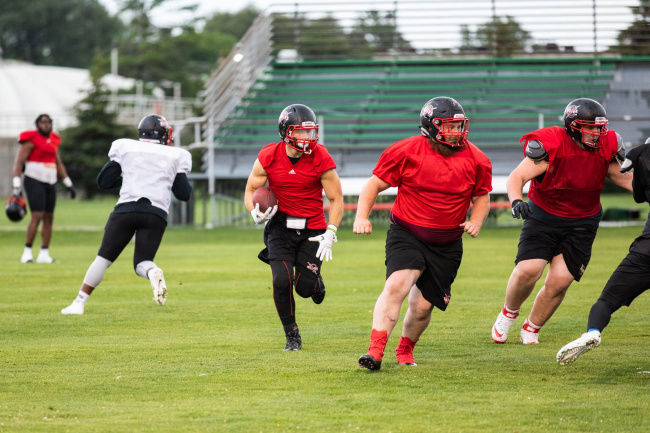 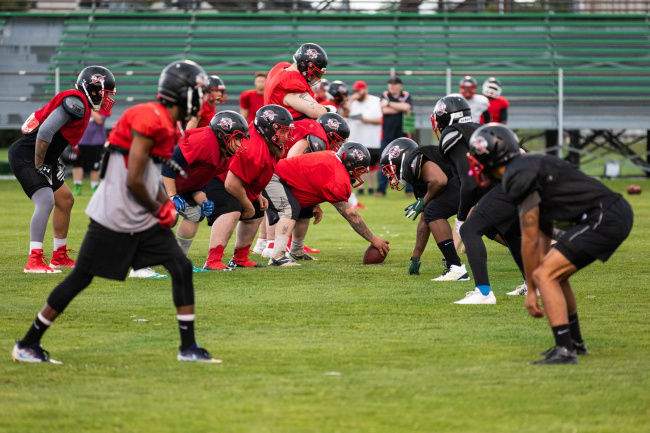 WATERTOWN — Hanging on a coat hook in George Ashcraft’s office is an Empire Football League mug, commemorating the 40th anniversary of the league back in 2009. After a couple of years away from the EFL, the Watertown Red and Black are back in and just in time for the league’s 50th anniversary.

Ashcraft, long-time head coach of the Red and Black, is happy to be back in a league that he and his team know so well.

“This has been a very smooth transition,” said Ashcraft, whose team spent the last two seasons in the Northeastern Football Alliance. “I felt it would have been anyway. Had I known a year ago that there were going to be seven or eight teams last year (in the EFL), I would have been back in it last year, but I didn’t know. But it is what it is, it’s a new year and we’re looking for positive things to come out of it.”

Veteran running back Joe Brennan compared the Red and Black’s return to the EFL like coming back home. The Red and Black played in the EFL for 42 seasons before exiting in 2017.

EFL commissioner, Dave Burch, is also pleased to have the Red and Black back in the league they played in for so many years.

Watertown will reintroduce itself to the league in week one when they travel to play its rival Plattsburgh on Saturday.

Not much has changed for the Red and Black on the offensive side of the ball.

“I’m very upbeat about what my offense is, because we got back a lot of returning people from the offense,” Ashcraft said.

Commanding the group, in his first year as offensive coordinator, will be Jared Law. Law has been around the team for a few years. After playing for the Red and Black as an offensive lineman he became the offensive line coach.

“It’s really like running any other organization, I’ve been in the Army for 10 years, I’ve run plenty of organizations within the Army and so I took the same approach,” Law said. “For me a lot of it was diving into the actual theory of the game, figuring how plays work and scouting our opponents and really just tailoring stuff to the players we have.” With so many players returning on offense, Law doesn’t have to focus so much on players getting acclimated with each other. He can go straight into fine-tuning their game for the three-month long season.

A big key for the offense is Hendricks. One of the better quarterbacks in the Northeastern Football Alliance last season, Hendricks enters his second season feeling much more confident.

“Last year was my first year back in a few years and I had to get my feet wet,” Hendricks said. “Coming back this year I feel way more confident, I know the guys, the guys know me, we know each other’s playing styles so I think it will be good.”

Hendricks said that these past few weeks have been about working on chemistry with the new guys. When the experienced players need to come off the field, the second-year quarterback is trying to keep his offense from skipping a beat.

The defense is a bit more green, including first year defensive coordinator John Bannister. While Ashcraft believes in-game experience will help the Red and Black defense improve, he doesn’t necessarily believe the lack of experience puts his defense at a great disadvantage.

“We’ve beaten people, in my career, that we’ve probably had no business beating and one of the reasons why we would win some of those games is because I would have new people that wouldn’t know anybody,” Ashcraft said. “So they just go out and play. That’s the secret to football, if you just go out and play the game, you usually do pretty well.”

The Red and Black starts the season with four road games and will play its home opener on Aug. 10 when they host Seaway Valley.