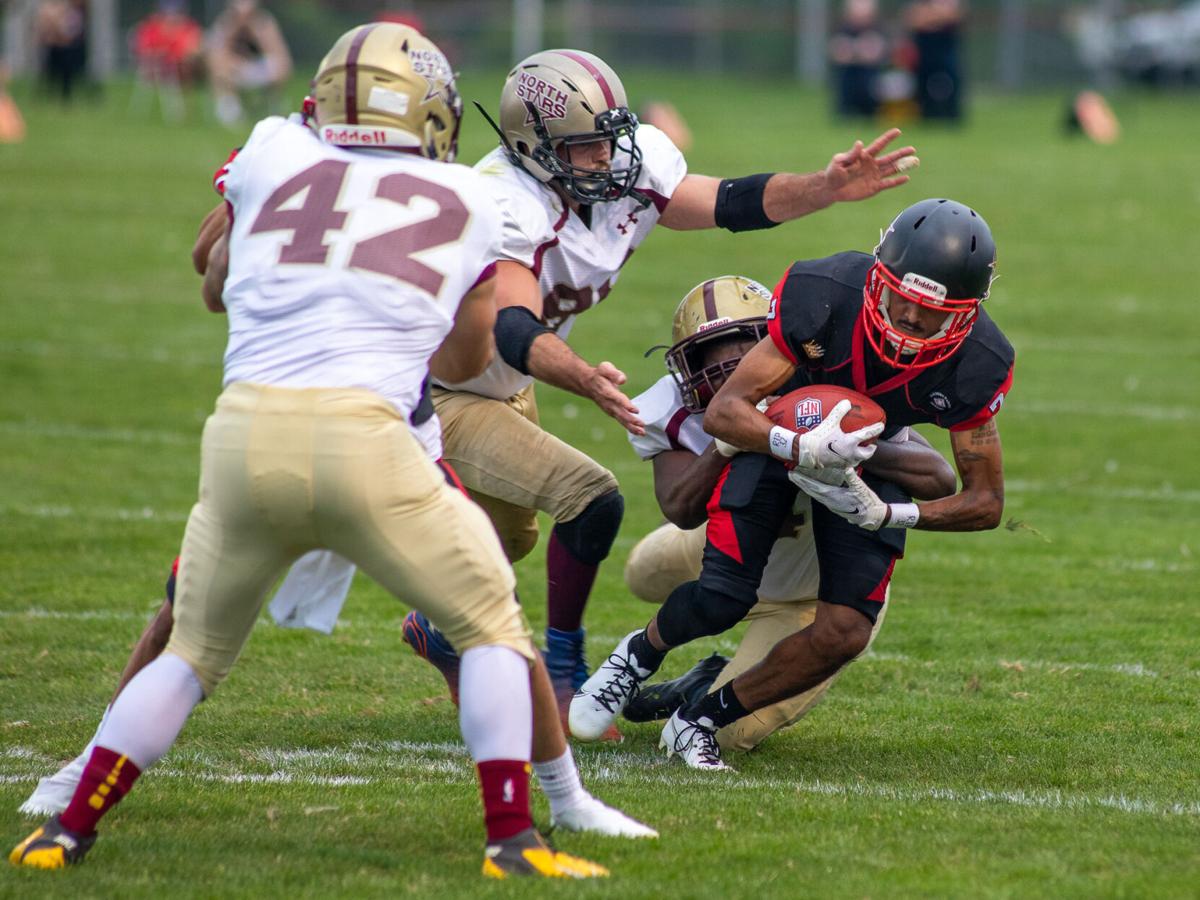 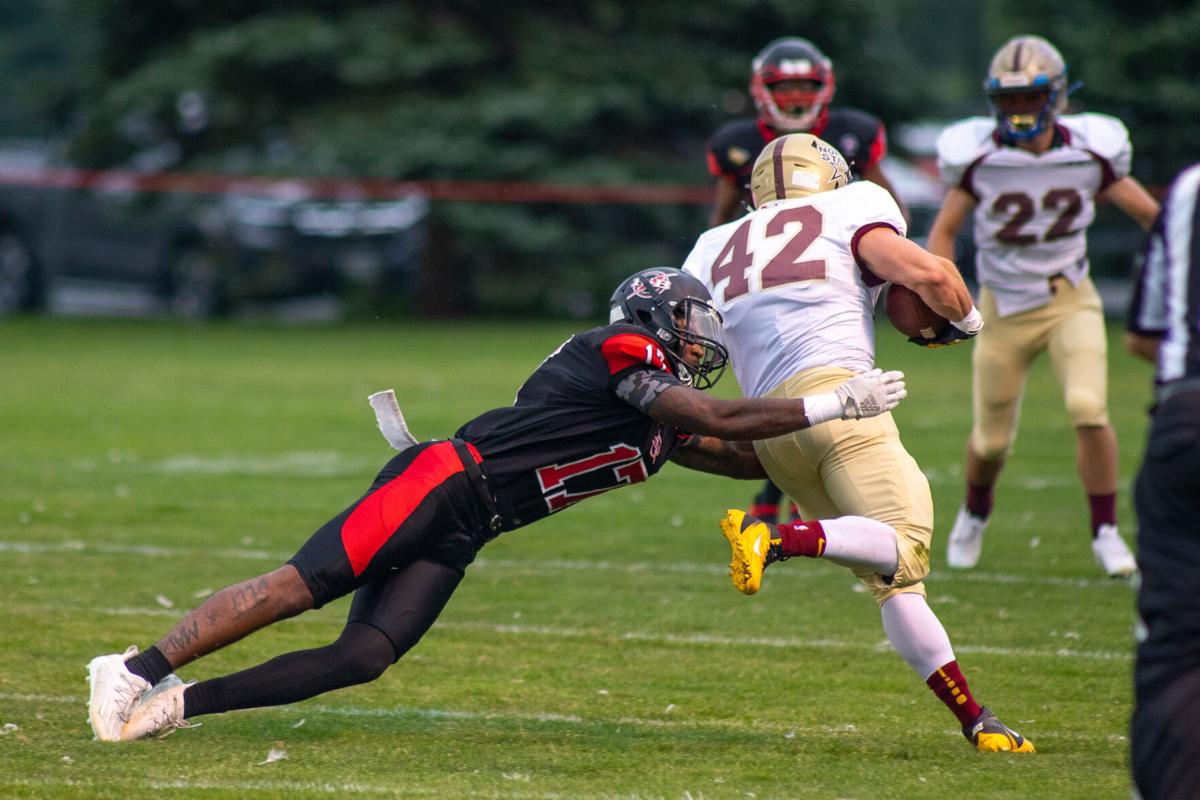 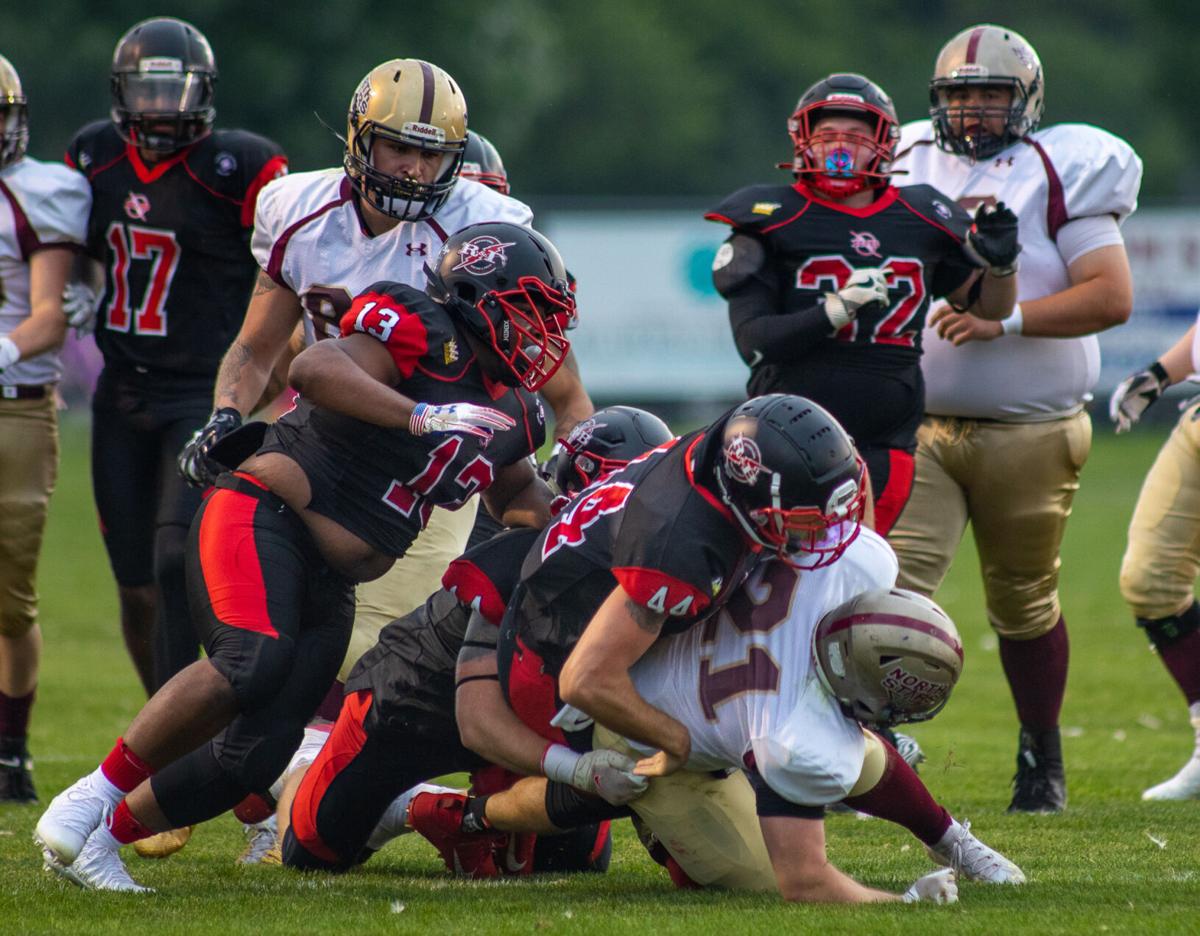 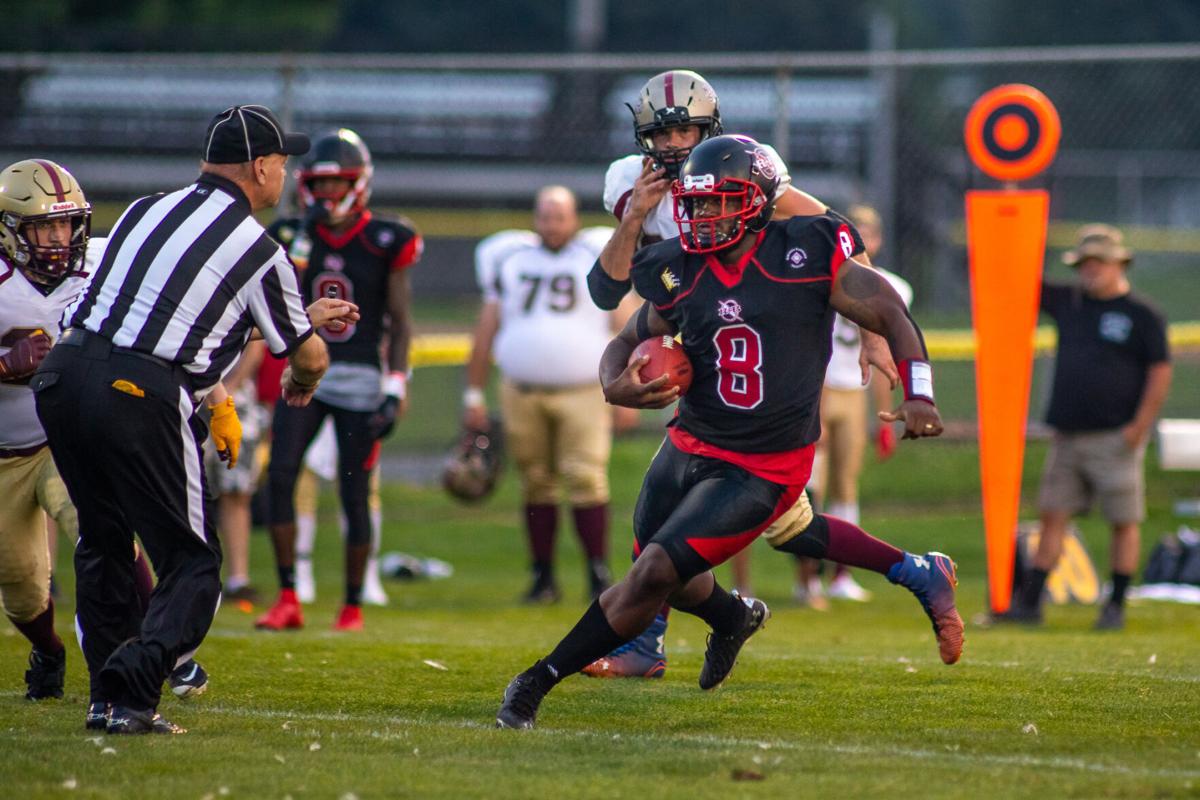 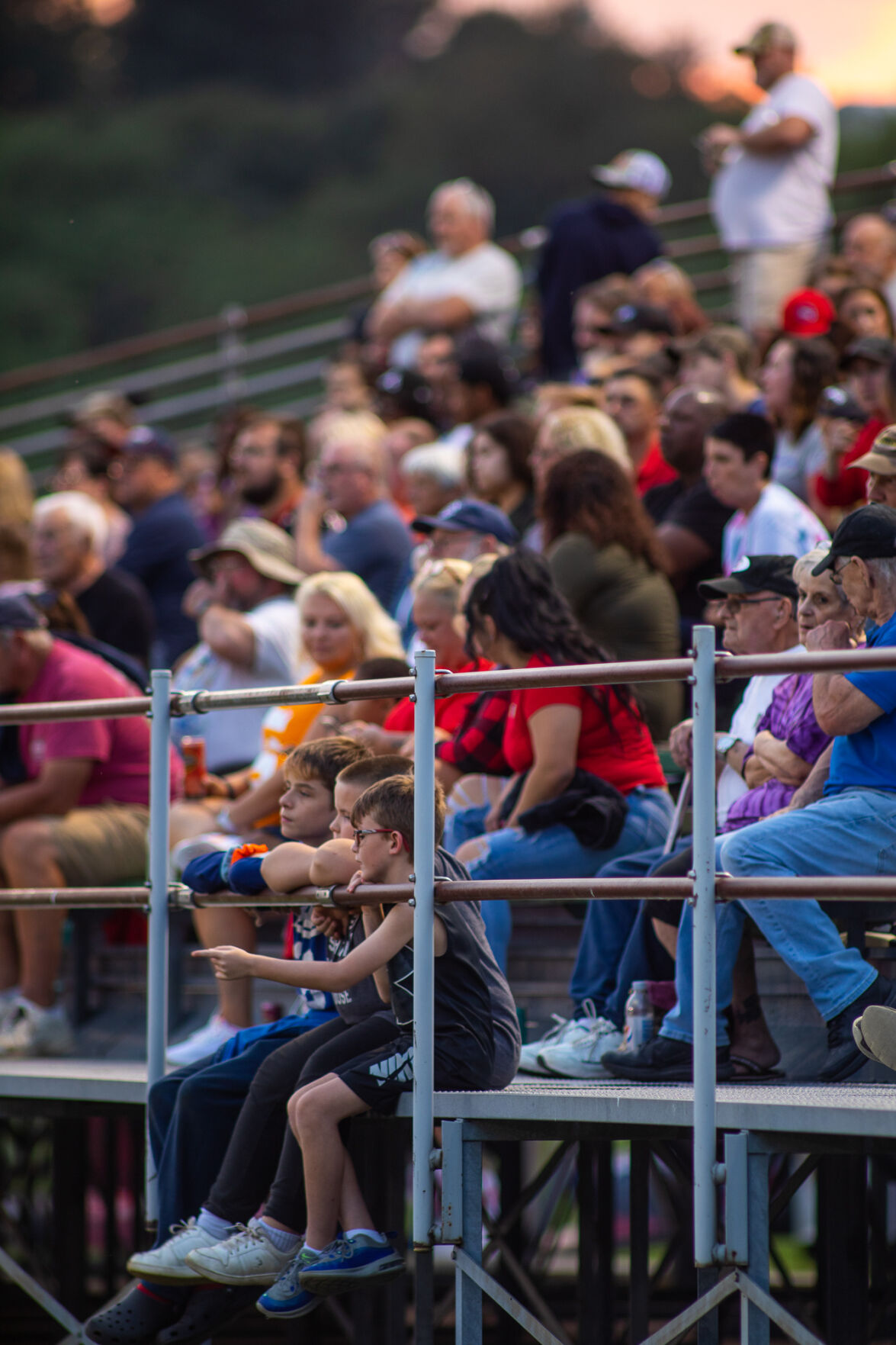 Fans filled the stands for the Watertown Red and Black’s season-opening game against the Plattsburgh North Stars on Saturday at the Alex T. Duffy Fairgrounds in Watertown. Kara Dry/Watertown Daily Times 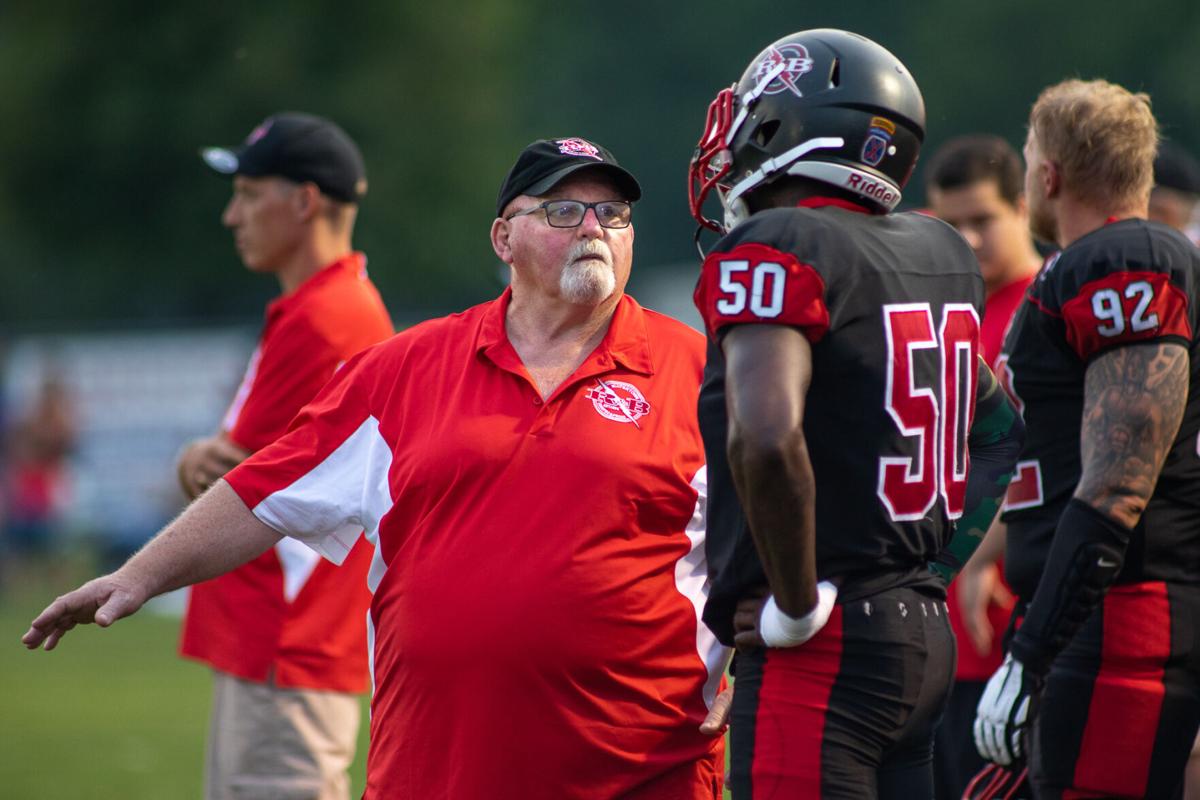 Fans filled the stands for the Watertown Red and Black’s season-opening game against the Plattsburgh North Stars on Saturday at the Alex T. Duffy Fairgrounds in Watertown. Kara Dry/Watertown Daily Times

WATERTOWN — Having not played a game in nearly two years, and led by newcomer Justin Stevenson, the Watertown Red and Black gutted out a season-opening victory over the Plattsburgh North Stars on Saturday.

The Red and Black sports two quarterbacks, each in their first season with the team, and in the second half turned to Stevenson, who rushed for three scores, including two in the third quarter, as Watertown rolled to a 34-7 season-opening triumph in the Empire Football League football game at the Alex T. Duffy Fairgrounds.

The Red and Black and the EFL didn’t play a season last year because of precautions taken during the COVID-19 pandemic. Thus Watertown took the field for a game for the first time since it hosted a league semifinal game on Sept. 28, 2019.

Stevenson rushed for 130 yards on 11 carries in his semipro football debut to pace Watertown on the ground. Fellow Red and Black quarterback Kalon Jeter led the team in rushing with 154 yards, also on 11 carries, and scored a touchdown.

Stevenson, who ran for touchdowns of eight, 49 and 63 yards, played his first football game since he was in high school.

“It’s been pretty nice, but I’m from Texas and I’m in the military, so I haven’t played since my senior year in high school, which was in 2017,” said Stevenson, who is from San Antonio. “But it felt nice to finally get out here and do some work, like old times.”

“You can’t say enough about it,” Watertown coach George Ashcraft said of Stevenson’s effort. “And we know both quarterbacks have that ability to run the length of the field. You keep your eyes open and get your legs moving, because they both can do it. And we’ve got wide receivers that if you can get them the ball, they’ll do the same thing.”

Stevenson took over for his fellow Fort Drum soldier, Jeter, at quarterback in the third quarter.

“I’m always ready to play all around,” Stevenson said. “I started out at quarterback when I was little, so I have some knowledge of it.”

Defensively, Watertown held Plattsburgh to a lone touchdown, which was scored in the second quarter.

“Defense, we started out slow, but that’s how it’s going to be the first game,” Red and Black linebacker Connor Brown said. “But, we’re a second-half team and that’s one of the strongest suits of a football team, when you’re down, you’ve got to pick your heads back up and just play the game of football.”

Limited to a pair of field goals by Eric Beyler in the first half, the Red and Black trailed 7-6 at halftime.

“Actually we had a couple good drives to start the game, but we just didn’t finish,” Watertown offensive coordinator Jerry Levine said. “We weren’t sharp passing the ball and that’s big area we’re going to have to work on and really key on. But both quarterbacks did a great job running.”

The Red and Black broke through in the third quarter on its second possession of the half. After Keegan Queior returned a punt 46 yards to the Plattsburgh 11-yard line, two plays later Stevenson scored on an eight-yard run up the middle. After the run conversion failed, Watertown led 12-7 with 8:17 left in the quarter.

“It felt good, it just brought back memories and it felt good to actually be out here,” Stevenson said. “Because I’ve always been working out football like no matter what, so it shows like all the hard work pays off. Not with just me, but the team as well. And I couldn’t do it without the team.”

Two Red and Black possessions later and on fourth down, Stevenson broke through the middle and scored on a 49-yard run for a 19-7 lead with 28 seconds remaining in the quarter.

“I thought (Jeter) had a good game and got us going in the beginning,” Levine said. “And then we were a little flat, but we have another good quarterback and I liked what he did in practice this week. He broke a long run against our defense, so we decided to give him a shot — and he gave us a good spark.”

After Plattsburgh went three and out on its next possession, Watertown once again tried its fortunes on fourth down, this time with Stevenson scampering up the middle and then breaking through on the right side for a 63-yard score with 10:48 left in the game. Jeter ran in the conversion for a 27-7 advantage.

With Jeter back in the game and under center, he broke free for a 25-yard rushing touchdown for a 34-7 lead with 6:15 left.

“We came out and executed,” Jeter, who grew up in Cincinnati, said. “We have a great quarterback duo with Justin Stevenson and myself. I would say it’s a great win, but it’s only a start for where we really want to go.”

Watertown running back Keegan Randle rushed for 61 yards on 15 carries.

“I think special teams played really well,” Ashcraft said. “The offense started clicking more in the second half and the defense played very well throughout. It was a team effort, I don’t have any complaints, a great team effort.”

Quarterback Dominick Bordeau completed 12 of 23 passes for 97 yards for Plattsburgh (0-1), including a 10-yard scoring pass to Troy Lawyer in the second quarter for a 7-6 lead. Zachary Raymond rushed for 32 yards on 18 carries to lead the North Stars on the ground.

The Red and Black will play its next three games on the road and plays at Syracuse next Saturday.

“It feels real good to be back,” Ashcraft said. “We really, really missed it and they bounced back well.”

Brown added: “I felt like we were just right back there where we left off from the 2019 season. And we have a lot of veterans returning, so that really helps us out this season.”