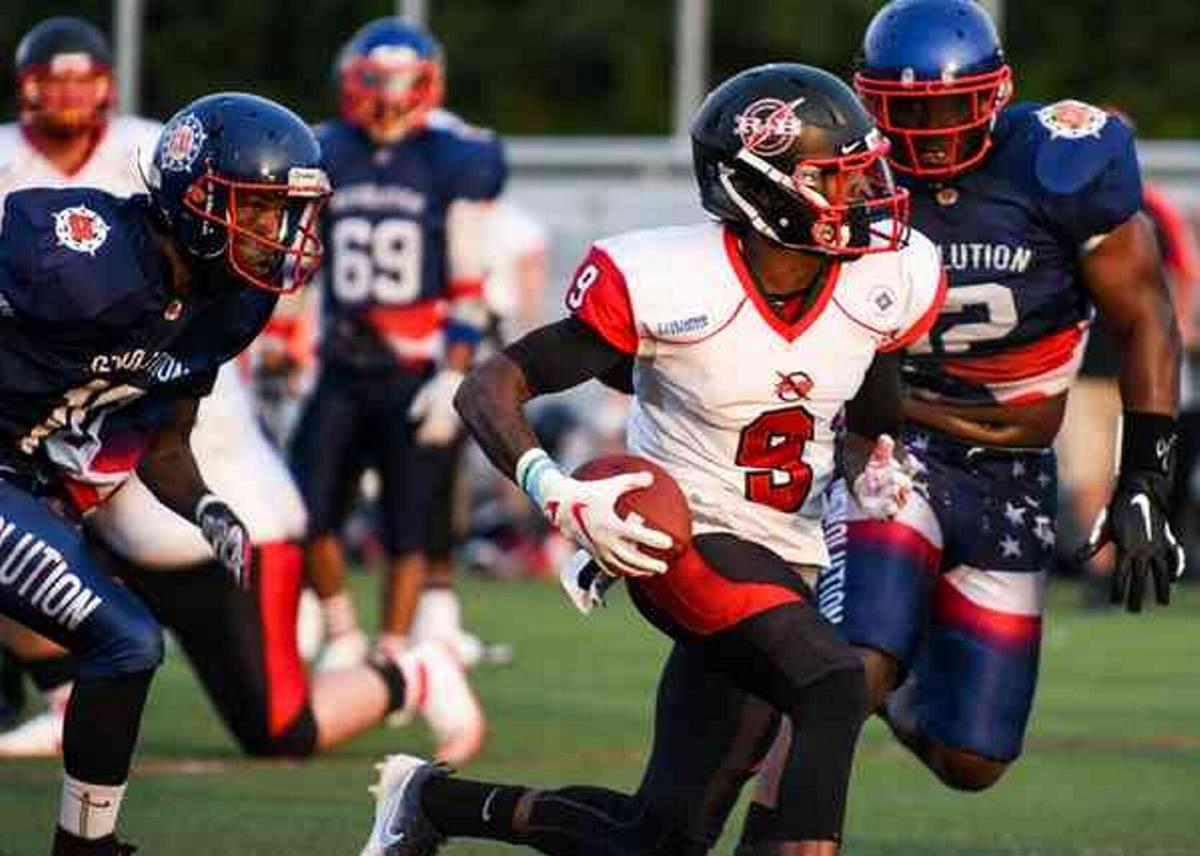 Wide receiver Chris Furr of the Watertown Red and Black advances the ball against the Carthage Revolution during a 2018 game in Carthage. Watertown Daily Times photo 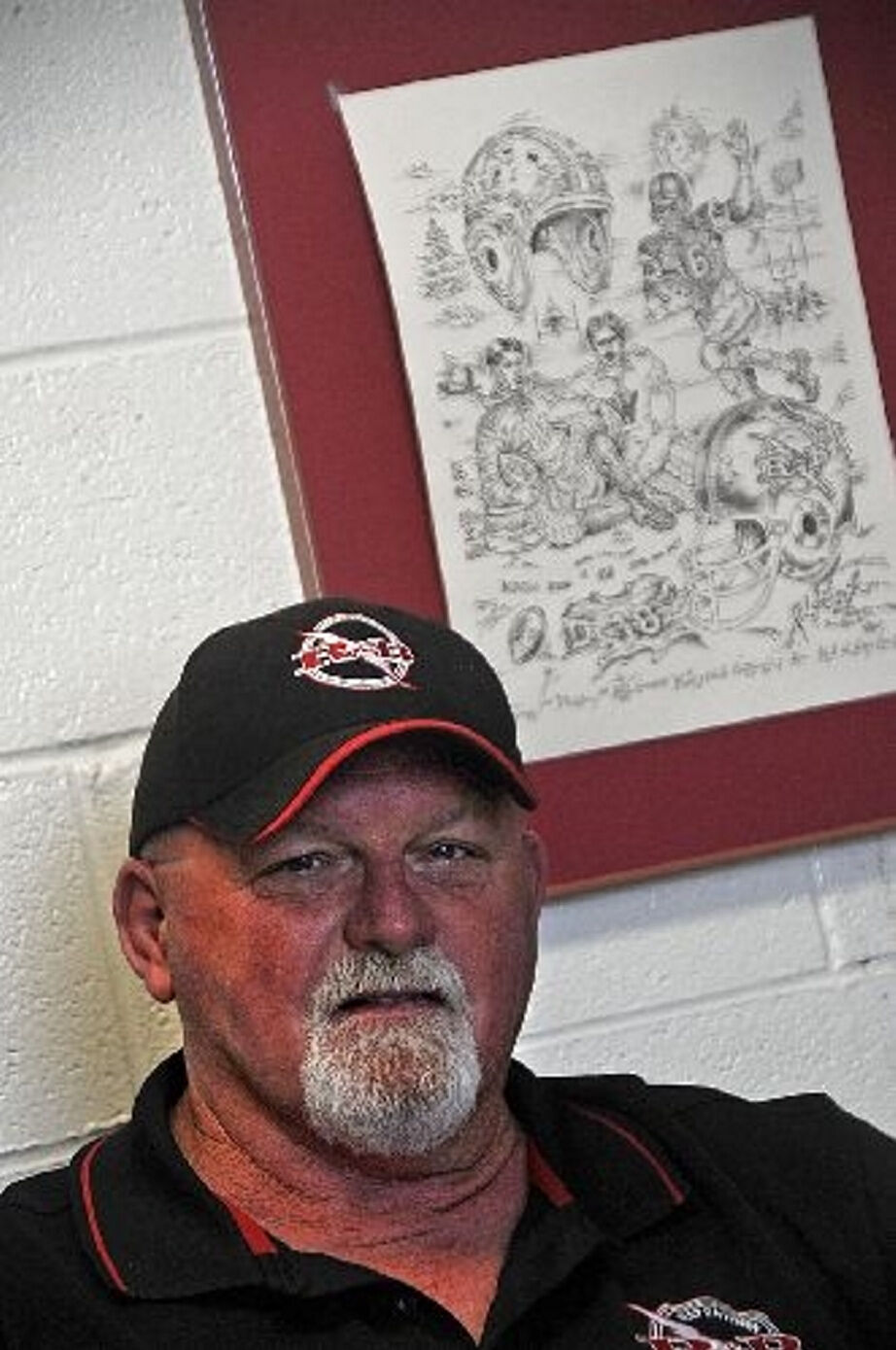 Wide receiver Chris Furr of the Watertown Red and Black advances the ball against the Carthage Revolution during a 2018 game in Carthage. Watertown Daily Times photo

WATERTOWN — In the absence of football last summer, George Ashcraft spent some extra time at his camp on Brennan Beach near Pulaski.

With more free time at his disposal, he took part in his favorite outdoors activities — at least those non-football related — enjoying what Lake Ontario has to offer.

Not that the longtime Watertown Red and Black coach didn’t miss football — far from it — as it was his first summer without semipro football in his nearly five decades of coaching the team. The Empire Football League canceled its season because of the coronavirus pandemic.

“It wasn’t tough at all, I stayed in camp all summer,” Ashcraft said. “After doing it for 33 years and then not doing it, it was different. I can honestly truly say it was weird, I’ve been around Red and Black football about 37, 38 years of my adult life, so I didn’t know what it was like having a summer off.”

Now Ashcraft is chomping at the bit as the Red and Black and the Empire Football League have returned, albeit a season to be played later in the year.

The Red and Black, the oldest semipro football team in the country, will open its campaign when it hosts Plattsburgh at 7 p.m. Saturday in an Empire Football Game at the Alex T. Duffy Fairgrounds.

“It was strange, it was really strange,” Ashcraft said of last year. “I’m glad we’re back, I really am. It keeps your wits more witty. The fun part of it is just beginning, because Saturday night is what it’s all about. I’m looking forward to it, I can tell you that.”

After not playing last year, Watertown promises to be a blend of returning players, as well as newcomers to the squad.

“It’s different, it was a long year,” Red and Black offensive coordinator Jerry Levine said. “There wasn’t a lot to do, but it’s been fun this year, guys who have been veterans who are back, we see them stepping up to help with leadership. We have a lot of new guys, so it’s been a challenge, but it’s great to be back, obviously.”

Ashcraft estimates the team has about 24 players returning, with the rest infusing some new blood to the program.

“The veterans that did return are helping the new guys tremendously to fit in at this level,” Ashcraft said. “I don’t know what to expect from one week to the next when we start our games anyway. But I can say we will be very competitive.”

The Red and Black return four wide receivers, led by veteran Furr, and six offensive linemen. But the team has a new quarterback as well as a new-look backfield.

“Our quarterback (Kalon)Jeter, he’s new and he’s going to surprise a lot of people,” Ashcraft said.

“There’s a lot of great guys, military affiliated or just local people here,” Furr said. “So we’ve got a lot of great guys on the team that know a lot. And then all the veterans coming back that we do have also putting their knowledge in there, too, so it helps it helps the new guys.”

Defensively, Ashcraft says the team has a “solid core” of linebackers, “a couple” returning linemen and defensive backs.

“It was nice summer to kind of recover and heal up,” Watertown returning defensive end Ky Saywer said. “Don’t get me wrong, we really wanted to play, but it was a good time to get physically where you need to be.”

As of early last week, the Red and Black had about 50 players on the roster.

“It’s always a challenge,” Ashcraft said. “The challenge isn’t as much to get bodies, it’s to get those bodies to come to practice, get that game plan put together. Because without a game plan, you start shooting blanks and you’re not going to go anywhere.”

Offensively, Watertown is led by Furr, who totaled a team-leading 16 touchdowns in 2019.

“Offensively we have tremendous skill players,” Levine said. “Our receiving corps is here, our running backs, could be our best total core that we’ve had here in a long, long time. We have a couple more physical runners and we have a lot of speed.”

The Red and Black’s receiving corps is one of the most experienced on the team, which also includes Keegan Queior and Hunter Loftus.

Jeter is a Fort Drum soldier who played in leagues in Germany the past few years before arriving in the north country.

“It’s definitely different, it’s an upscale movement,” Jeter said. “So it’s allowing me to be able to continue playing and continue expanding my knowledge. I’m moving out of position, so that’s something different for me, but I like the obstacle and I’m ready to overcome it.”

There’s already much excitement around the team about Jeter and his athletic skills.

“He’s doing a tremendous job learning on the fly,” Levine said of Jeter. “It’s a lot, he’s handled most of the reps here, we’re working on finding a backup. He’s a tremendous athlete, he could play anywhere on the field.”

The Red and Black will also enter the campaign without stalwart running back Joe Brennan, arguably the face of the franchise on the field before he retired after the 2019 season.

The team will look to Keenan Randle to carry the load at running back, after playing on defense for the team two years ago.

“Randle, he’s from Fort Drum, he’s a big boy and he was a linebacker for us in the past,: Levine said. “He gives us good size with some speed.

“We’ve got some guys from out of town from Syracuse, we’ve got Shaton Clark and we’ve also have Chao Porch, they’re phenomenal runners with speed and talent. We also have Jamal Finkley, who is a former Revolution player and he’s joined us.”

The offensive line includes five returning starters, but the line has been a work in progress as the team has rarely worked with a full contingent of linemen at practice thus far.

“They just have jobs that don’t let them be here all the time,” Ashcraft said. “When they show up, it looks great.”

Ashcraft likes what he sees from his defense, although there will be plenty of newcomers added to the mix.

“We’re solid, we’ve got a very solid defense,” Ashcraft said. “Linebackers, defensive backs, up front guys, I’ve got a lot of new people. But they’ve got a lot of physical ability.”

Ashcraft said the Red and Black will be led defensively by Connor Brown and Derrek Dalton.

“Defensively to anchor us, they are two studs,” Ashcraft said of the pair. “They play linebacker, but they’re all over the field, they really truly cover a lot of ground, those two young men do. And they’re not youngsters, they’ve around now for a half dozen years or more and do very well.”

“D-back wise I’ve got back two returners who are both very quality returners,” Ashcraft added. “That with a half dozen more that are new people, I just can’t wait to see them in game situation.”

Sawyer said: “We’ll be a lot faster, I think we’re going to be a really athletic team. We have a few returning people, like key players, but we have a lot of skill position players, a lot more than I think we’ve ever had before. Like on both sides of the ball.”

Watertown was to play a seven-game schedule in the EFL as the other teams were slated to do as well this year, but this was reduced to a six-game slate, with the Tri-Valley Spartans and Northern New York Grizzlies opting not to play this season.

After opening up against Plattsburgh, the Red and Black will spend the rest of the month on the road with games at Syracuse on Aug. 14, at Glens Falls on Aug. 21 and at Plattsburgh on Aug. 28.

Following a league-wide bye week, Watertown will close out the regular season with a pair of home games — versus Glens Falls on Sept. 11 and against Syracuse on Sept. 18.

After another league bye week, the playoffs begin Oct. 2 in the semifinal round, with the league title game Oct. 9.

“Playing everybody home and away is real nice, because the first three games matter a lot,” Ashcraft said. “But the next three will matter even more. Because after we play everyone once, we can relish the opportunity to play them again and that’s what I’m looking forward to. That part of it is going to be fun.”