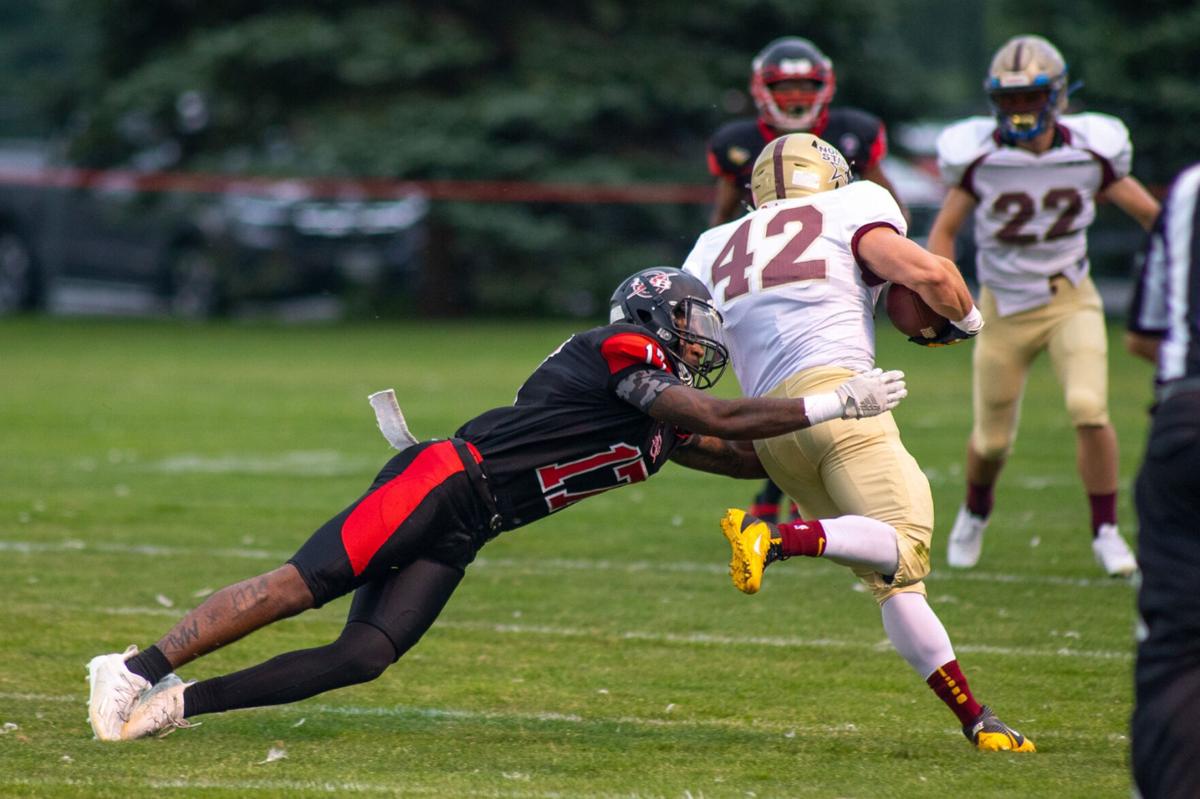 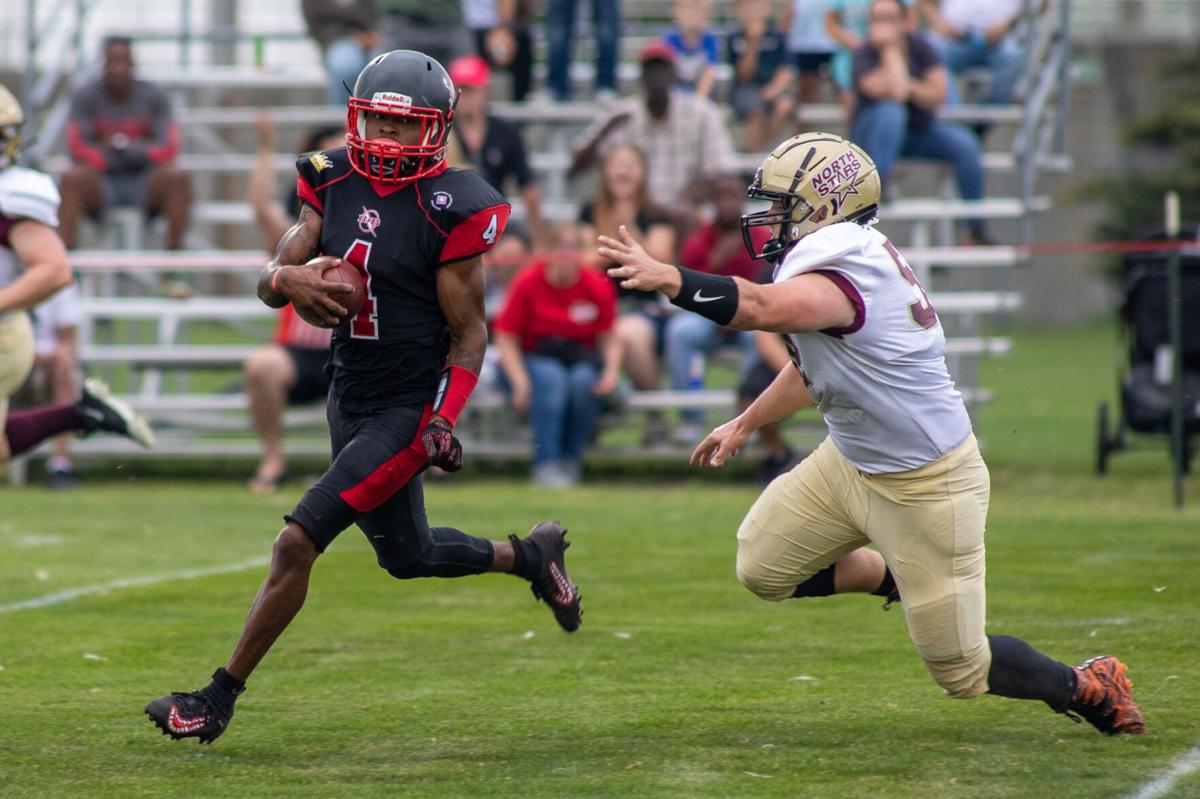 WATERTOWN — The Watertown Red and Black held the final practice of the season on Thursday night, just after the sun dipped below the horizon.

The Red and Black gathered for practice under the lights at the Alex T. Duffy Fairgrounds on a warm autumn evening as it prepared for the Empire League championship game.

Watertown (6-1), which has won its past five games, will host the Glens Falls Greenjackets (3-4) at 7 tonight with the EFL crown on the line.

Perhaps this is a good omen for the Red and Black, which won its last league title back in 2009, also the last time the team has hosted the league final.

“Glens Falls and us, the two oldest teams in the nation coming together for a championship, I love it,” Watertown coach George Ashcraft said. “If we have to play anybody, it might as well be Glens Falls, (team president Hank) Pelton has a good thing going down there. It’s going to be great game.

“This will be our toughest game all year because we have to play the best ball we’ve played all year to do what we want to do,” Ashcraft added.

Watertown will be gunning for its third league title in the EFL, winning in 1980.

“The fact is that it’s overwhelming, but I’m glad that we made it this far,” Red and Black veteran wide receiver Chris Furr said. “I know the season was shorter, but we still did what we had to do to get here to the championship.”

“We are blessed as a team to have this opportunity,” Red and Black linebacker Curtis Dukes said.

Players such as Furr and Dukes played in the Red and Black’s last championship game appearance, in 2015 when it lost on the road, 14-6, at the Syracuse Strong.

“I ended up breaking my foot that game and we ended up losing,” Furr recalled. “So to come from 2015 and go all those years with the team, and coming close to making it to the big game — and now we’re actually in the big game. It’s bringing some memories back, so hopefully it will be a better outcome.”

Watertown also reached the league final in 2014, also on the road, but was blanked by Plattsburgh, 6-0.

“We haven’t had the opportunity to play at home and now we’ve finally got it,” Watertown offensive coach Jerry Levine said. “We’ve worked so hard every year to get home field and something goes wrong, and we’ve never been able to host a championship since 2009.

“We’ve had some really good teams that have had to play on the road and lost some close games. Now finally we have it in our own backyard and we have to take advantage of it.”

This season has been a new experience for Red and Black quarterback Kalon Jeter, a Cincinnati native who previously played semipro football in Germany while he was stationed there with the Army.

“It’s a big opportunity,” said Jeter, currently a Fort Drum soldier. “Especially coming into the season, we were missing a lot of pieces. We had a few players who couldn’t come over from Canada and we were missing a quarterback. So to be able to step up and fill that slot has just been an amazing moment truly for me.”

While Watertown’s offense has found a groove in recent weeks, including last Saturday’s 28-8 home semifinal win against Syracuse.

“I think we’re at an extremely high level,” said Jeter, who ran for two touchdowns and passed for another last week. “For us to fall at this point, it’s going to take a lot. We’ve continued to climb and continued to build game by game, I think we’ve only gotten better week to week.”

Defensively, the Red and Black has allowed only three touchdowns in its past five games, those coming in last two games against Syracuse. Watertown previously recorded three consecutive shutouts and didn’t yield a score for 13-plus quarters.

“Absolutely, we’ve got great leadership on the defensive side of the ball and everybody seems to follow,” Watertown defensive coach Nate Bryant said. “They know these guys Derrek Dalton and Connor Brown, they’ve been here, they’ve played these teams for a while, they know what it takes to beat these teams.”

Watertown has allowed only 49 points in seven games this season. In comparison, the Red and Black yielded only 56 points in 12 games during the 2009 season, recording seven shutouts, including the championship game.

Bryant, who played on the 2009 team, sees parallels between that squad and this year’s group.

“This year, we may not have played as many games in this season, but I think our defense it definitely comparable to our 2009 team,” Bryant said earlier in the season.

Ashcraft and the coaching staff are wary of Glens Falls, even with Watertown winning both regular-season meetings.

“They have a good receiver corps and a good quarterback as well,” Levine said of Glens Falls. “We really have to be ready against them on both sides of the ball.”

After defeating the Greenjackets in Glens Falls, 9-0, on Aug. 21, the Red and Black blanked Glens Falls once again, this time, 34-0, on Sept. 11 at the Fairgrounds.

Glens Falls reached the EFL title game, defeating Plattsburgh, 12-0, last Saturday. Quarterback Bryant Ward returned to the team, rushing for a touchdown and passing for another in the win.

“They’re a great team, I’m not going to take anything away from them, they have athletes on that team,” Furr said. “People that I’m friends with, they’re athletes. They’re going to come out and play their game, because they’re also trying to win a championship. We’ve just got to come out and be the better team.”

“We’ve been told they have some newer weapons, some people that came back that were hurt earlier in the season or had to take some time off,” Jeter said of Glens Falls. “So now to come back and play them at full strength, we don’t underestimate anybody. We’re going to come and we’re going play our game and we’re going to go full throttle from start to finish.”

This also marks the 10th time in Ashcraft’s longtime career with Watertown that he’s guided the team to a title game.

The Red and Black won its first EFL title in 1980, beating the Troy Uncle Sammies, and later capturing the 2009 crown over Plattsburgh, 6-0.

“I’m excited,” Ashcraft said. “Playing in a championship game is a big deal. The pressure will be on us, but we welcome the pressure.”

“Everybody is always excited about being in the big game,” Furr added. “I’m definitely excited, because we have the support from our fans, our family and friends. So it’s amazing for them to actually see it again. They said the last time they won it was in 2009, so for us to bring it back here in 2021 playing in front of them, it’s big for us, but also big for our fans and family.

“I’m just happy they get to experience this with us.”