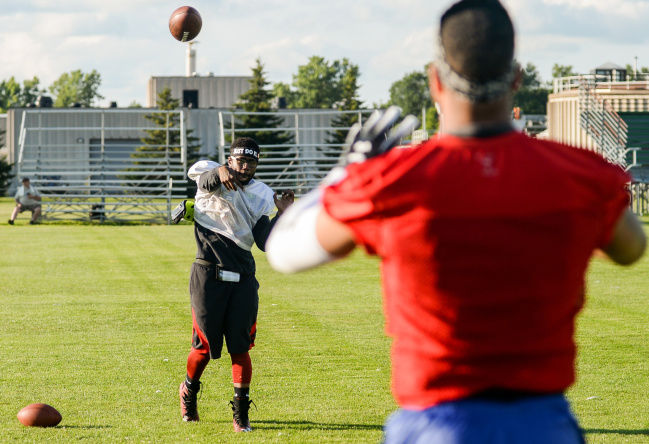 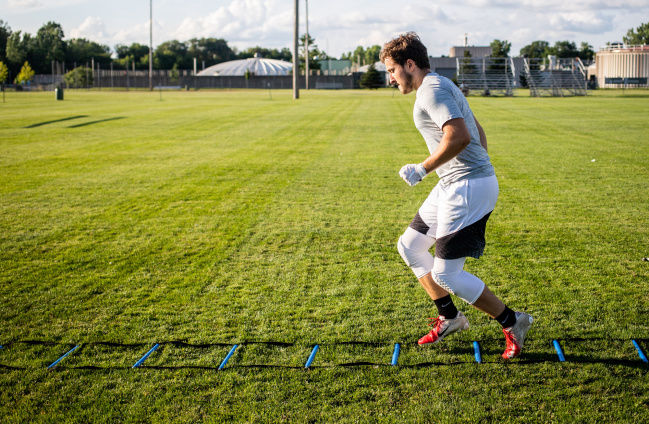 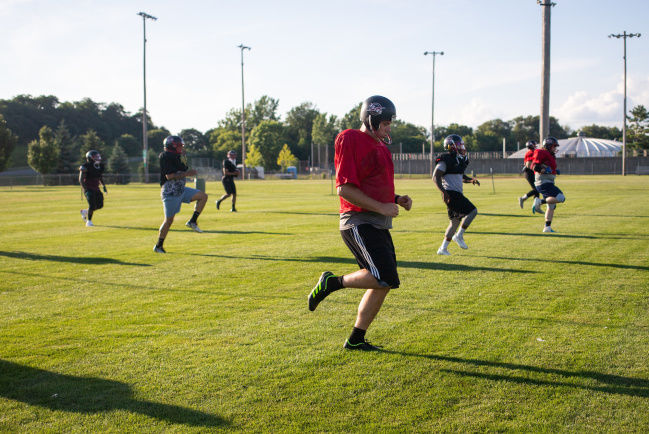 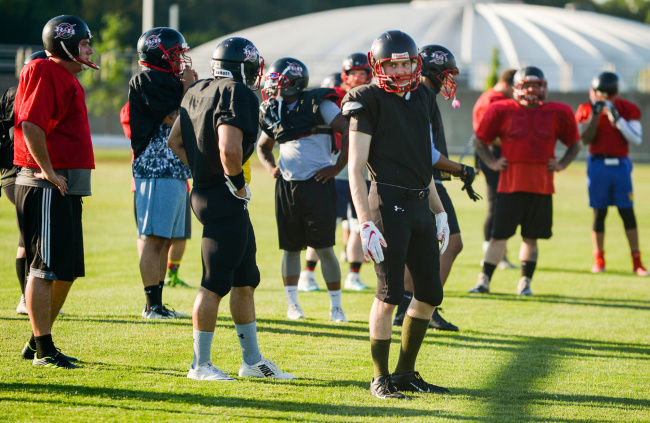 WATERTOWN — The Red and Black defensive players are still learning each others names. When I asked a couple of defensive backs at practice Thursday where I could find Tyler Hill, they looked at each other then turned to field and half serious, half joking asked, “Is there a Tyler here?”

Hill, who was working on a defensive back drill at the time, says they haven’t quite gotten names down yet. When they play, everyone is referred to by the number on their back.

The majority of the Red and Black defense has turned over from last year. John Bannister, a first-year defensive coordinator, said that only four players on the defense returned from last season.

With that type of turnover, Bannister not only needs to bring his squad up to speed in regards to executing coverages, but he also needs them to gel with one another, something that is a work in progress.

“With the defense we’re about 90 percent new guys, we only have about four returners this year,” Bannister said. “These guys are all fresh, they’ve never worked or played together, so now that they have that game under their belt they’ll be much better this week.”

Saturday’s season opener was harsh introduction to semipro for many of Red and Black defensive players. The Plattsburgh North Stars trampled the Red and Black to the tune of 47 points in Watertown’s first game back in the Empire Football League after a two-year hiatus. It was a defeat of 30 points.

Hill, a first-year player from Hawaii, said the team is still learning to trust each other on the field.

“We have a lot of speed at the linebacker and cornerback and safety positions, for sure, we just have to work on our base fundamental defense, getting in the right gaps and everyone just needs to focus on doing their own job,” Hill said. “The last game we kind of felt hesitant to do our job and tried to compensate for the dude next to us and that really bit us in the butt on a couple of plays.”

For Hill, and many other newcomers on the Red and Black, this summer is the first time he’s suited up in pads in quite a while.

Originally from Hawaii, he has been in Watertown for the past three years, serving as a TACP on Fort Drum. He said the last time he played football was in 2014 during his senior year of high school.

Back then he played wide receiver, but with the Red and Black he’s converted to defensive back. Part of the reason for his transition to the other side of ball was to fall into an open spot on the depth chart, Watertown has a solid core of returning wide receivers. The other part was the desire for a new challenge.

“I just kind of wanted to play defense more, I had more fun playing defense in the flag [football] leagues,” Hill said. “As a receiver I would always watch the corners and they were always moving, you could never jump offsides really. On defense, it was challenging. You go up against the offense so you don’t really score but when you do score you’re really changing the tide of the game. I felt it would be fun, it is fun, I’m just happy that these dudes are out here everyday working.”

Hill said the most difficult part about learning the position so far is keeping up with receivers as they spin, juke and sprint down the field.

Of the returning defensive players is Ky Sawyer. The last time Sawyer was with the Red and Black was three years ago as a coach. The former defensive standout was in motorcycle accident in July 2015 that resulted in part of his left leg being amputated. Four years later, he’s back in pads for the first time since the accident.

“It’s surreal, like it’s not actually happening,” Sawyer said. “It’s a bit more meaningful this time I feel like, I know what there is that I can lose.”

The Red and Black (0-1) will play its week two game tonight against Tri-City at Schenectady High School at 7.