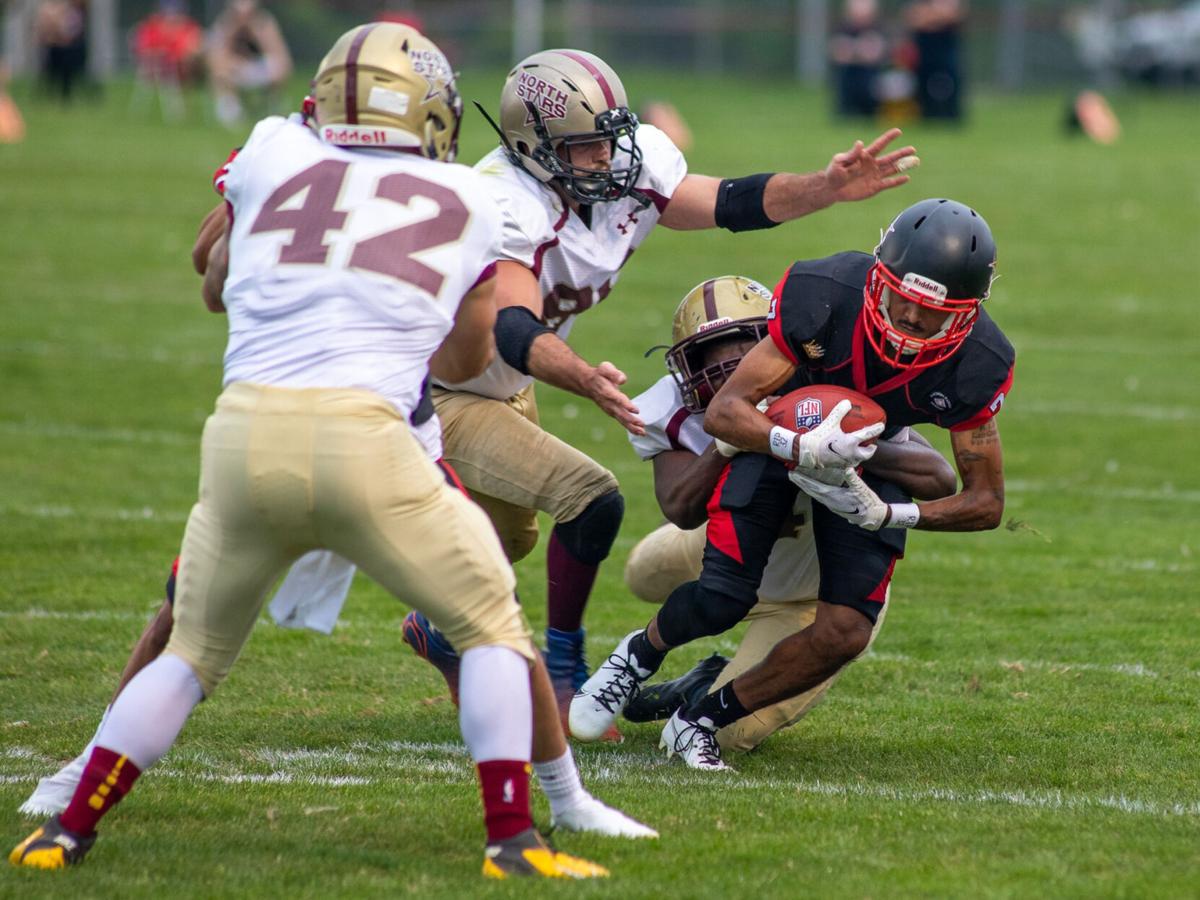 Watertown’s Keegan Queior holds on after making a catch during a game against Plattsburgh on Aug. 8 in Watertown. Kara Dry/Watertown Daily Times 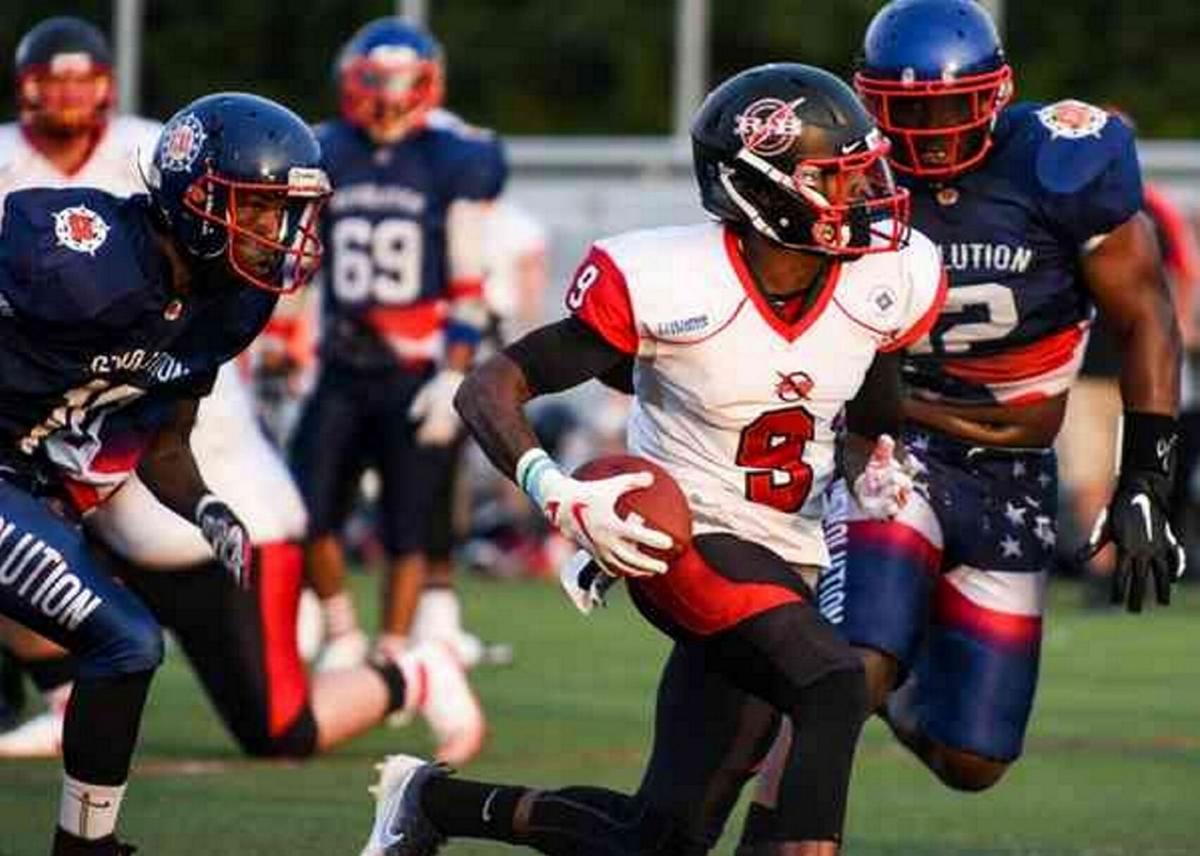 Chris Furr of the Watertown Red and Black runs with the ball in a 2018 game against the Carthage Revolution in Carthage. Watertown Daily Times photo

Watertown’s Keegan Queior holds on after making a catch during a game against Plattsburgh on Aug. 8 in Watertown. Kara Dry/Watertown Daily Times

Chris Furr of the Watertown Red and Black runs with the ball in a 2018 game against the Carthage Revolution in Carthage. Watertown Daily Times photo

WATERTOWN — Chris Furr and Keegan Queior have teamed up to comprise one of the Empire Football League’s most lethal wide receiver duos in recent years.

This season is no exception and Furr might not have had as strong season as he’s accustomed to by his standards. But that’s not his primary focus as the Watertown Red and Black moves into the playoffs.

Furr and Queior, both veteran wideouts, will help guide their team into the postseason as the Red and Black (5-1) host the Syracuse Smash (2-4) at 7 tonight in an Empire Football League semifinal at the Alex T. Duffy Fairgrounds.

“They’re invaluable, that makes all the difference in the world,” Watertown coach George Ashcraft said Furr and Queior. “These guys are teaching the younger ones that’s what it’s all about. These guys work real, real well together and I’m loving it.”

Last year, there were no playoffs for the Watertown Red and Black or any EFL team. The pandemic took care of that as the league’s entire season was canceled, and now Furr and his teammates are even more amped up about the postseason.

“It’s still the playoffs, but this year it feels better than any other year,” said Furr, who has played for the Red and Black since 2013.

“This is what we play for,” Queior said before Watertown’s last game against Syracuse two weeks ago. “Finishing strong for the playoffs is what it’s all about.”

Queior leads Watertown in catches (15) and receiving yards (224), with Furr not far behind, standing second on the team in these categories with 12 receptions for 221 yards in six games. It’s not quite the dominant season Furr usually produces.

“Personally, it’s not my best season,” Furr said. “But like they say, there’s no ‘I’ in team, so I’m just here to help my team win and get us into position to where we need to score and just beat the other team, pretty much.”

“He’s one of the best, he has been every year he’s played for us, he’s very, very talented,” Ashcraft said of Furr. “What he does with the ball after he catches it, you never know, he might go the length of the field on you, but he makes some huge catches.”

Both Furr and Queior possess different personalities on the field, according to Furr.

“He brings his assertiveness, basically his attitude,” Furr said of Queior. “And then me, I’m the calm one, so it kind of works well for both of us.”

“Chris and Keegan have been 1,000-yard receivers before for this team,” Watertown offense coach Jerry Levine said. “They’ve both done very well for us over the years.”

Furr has also battled through injuries this year, as he’s done before in his career, but doesn’t use this as an excuse.

Furr is clearly confident in Watertown’s prowess as a veteran wide receiver unit.

“It’s been like that for the past few seasons now,” Furr said. “He’ll say it, I’ll say it, me and him, including Alex, I feel like we’re the best receiver trio in the league. We always want to one-up each other, and that’s basically all we do every game.”

The Red and Black’s offense has displayed balance throughout their current winning streak as on the season first-year quarterback Kalon Jeter has run for 355 yards and six touchdowns while totaling 545 passing yards and two scores through the air.

Watertown leads the EFL in points scored with 130, well outpacing its closest competitor, Syracuse with 98, and also tops the league in fewest points allowed (49).

“Definitely a good thing,” Furr said of the team’s offensive balance. “I mean we like to pass, but then we also have people that can run, so we want to use all of that, or as much as we can, to just to open up some of the key plays that we need to either score or get into scoring range.”

Furr added about Queior: “He might be a little more faster than me now, I’m a little slower now. But my birthday’s next week, so I’m just trying to secure this ‘W’ and get to the championship and celebrate the birthday right after.”

Watertown will face Syracuse for the second time in three weeks as the two teams split the season series, with the Red and Black winning the last meeting, 33-14, on Sept. 18 at the Fairgrounds to secure home field throughout the playoffs.

“I think the difference is we just executed everything we needed to execute,” Furr said. “We ran a few different schemes that they hadn’t seen before and I think that’s what kind of got them a little bit.”

“They’ve given us our toughest battles of the year,” Levine said of Syracuse. “We played well once, we didn’t play well the first time. We had to get off to a good start and that was the key to the last game.”

Since then, Watertown has won five consecutive games to clinch the league’s regular-season title.

The Red and Black will wear a special decal on its helmets tonight in honor of 14-year-old Tyler Christman of Carthage who died on Sept. 21 from a severe brain injury he suffered during a junior varsity football game.

Also, former longtime General Brown football coach Steve Fisher, who also played for the Red and Black, passed away on Monday at the age of 75 after a battle with cancer.

“Young Christman, we’re honoring him and Steve Fisher on Saturday night,” Ashcraft said. “We’re dedicating the rest of our season to what would have been the start of one’s career and to the man that is a true legend to the sport. You can’t say enough good about what Steve Fisher has done in his 45 years of being a high school coach.”

“He was also a great Red and Black player,” Levine added. “He was the defensive player of the year when we won the EFL championship in 1980.”