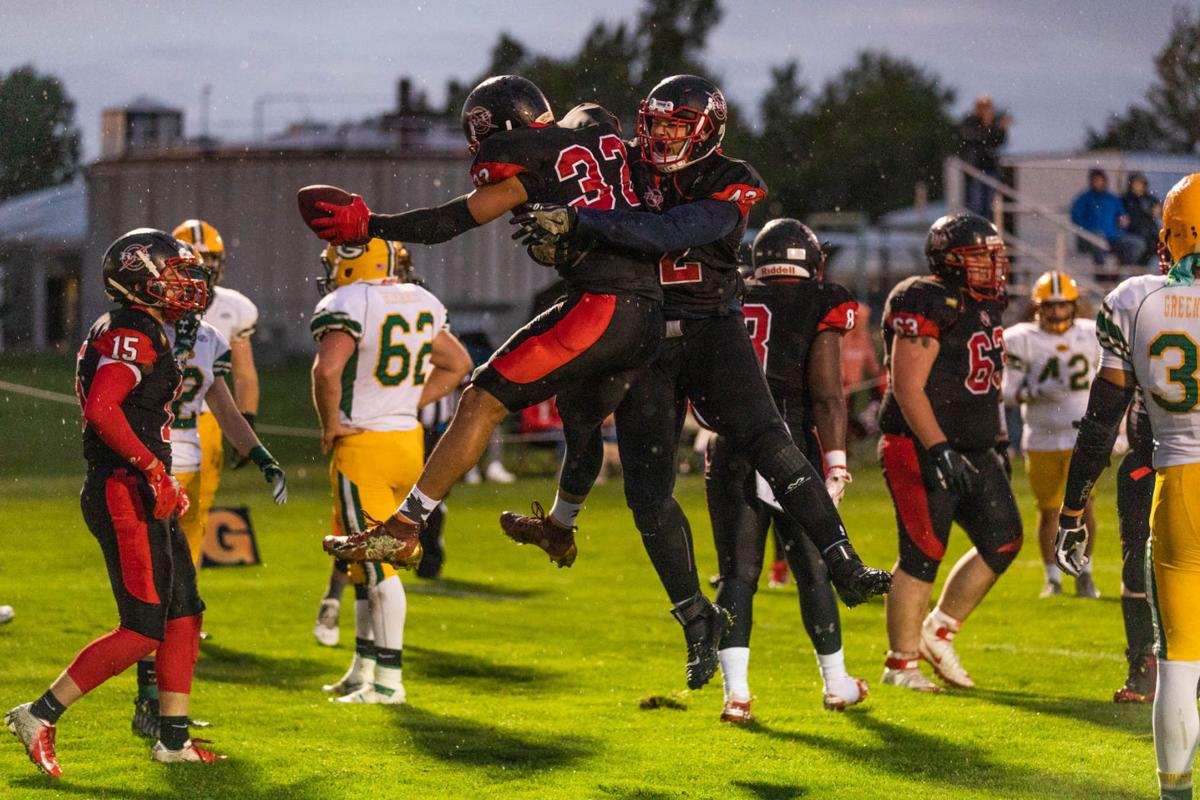 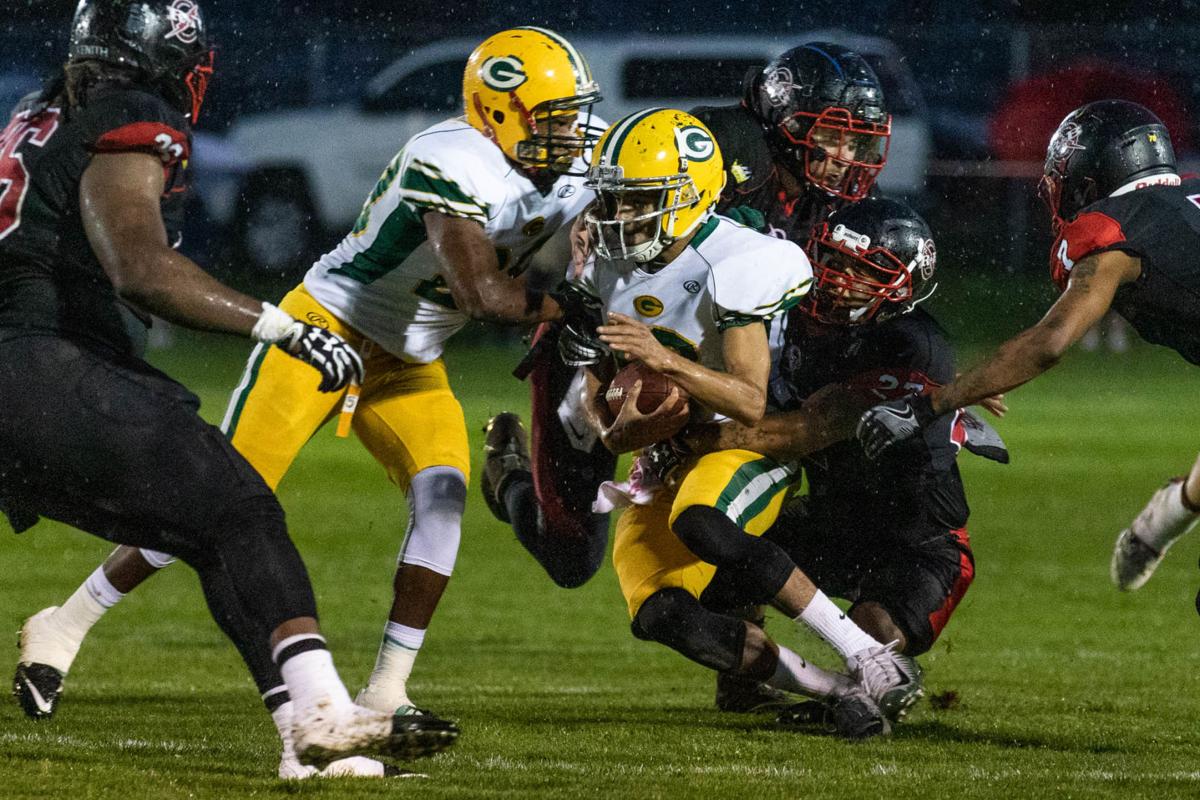 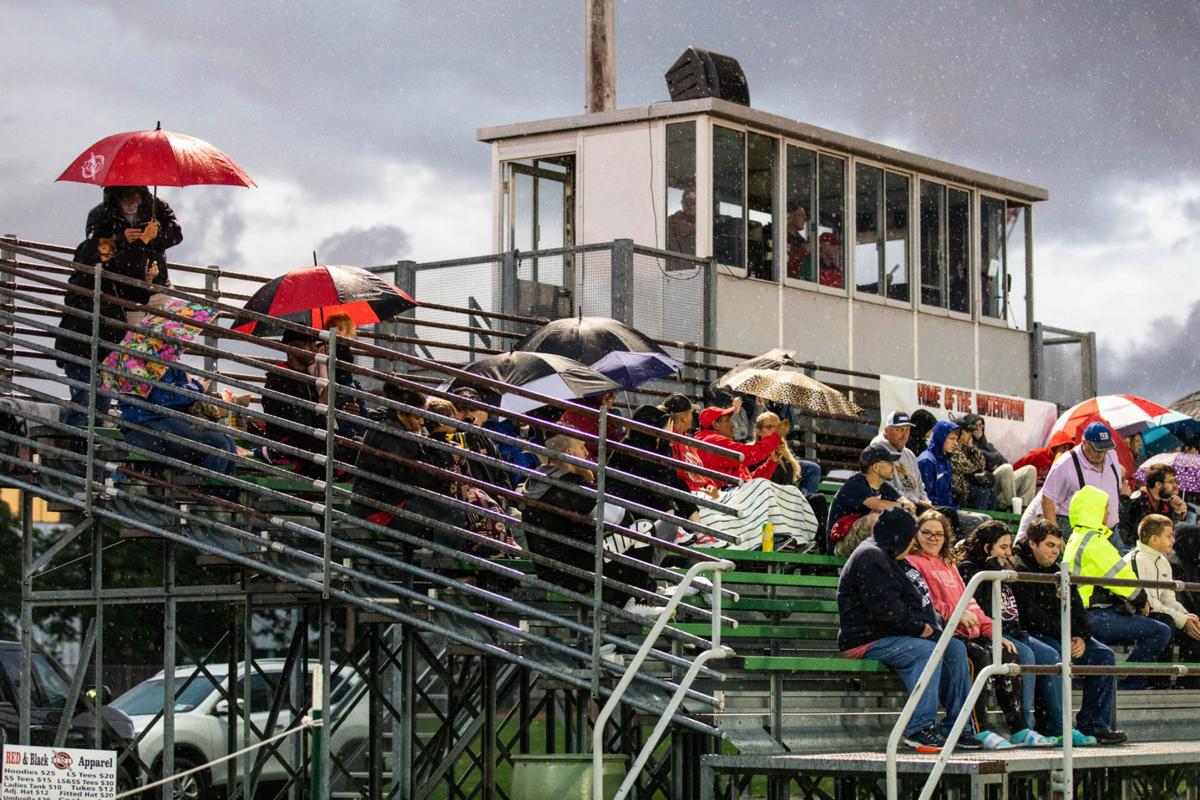 Watertown Red and Black fans sit in the bleachers with umbrellas as it begins to rain Saturday during a game against the Glens Falls Greenjackets in Watertown. Sydney Schaefer/Watertown Daily Times 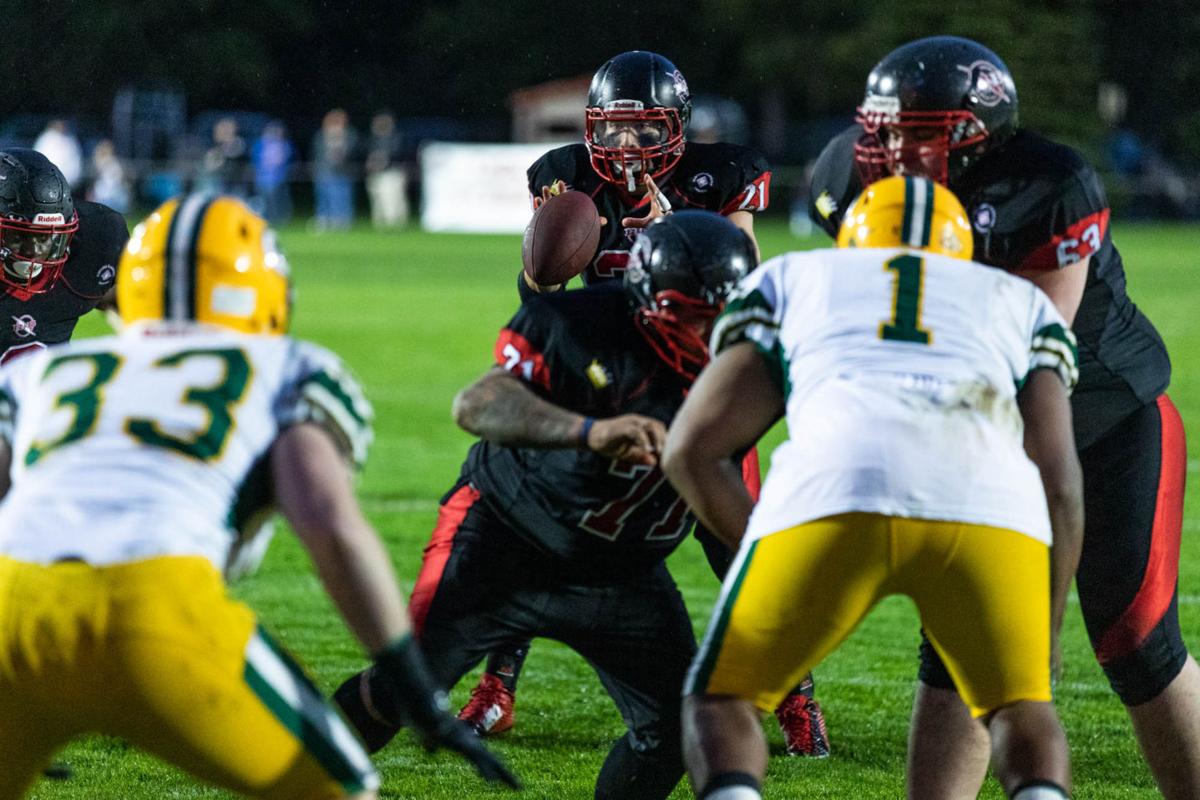 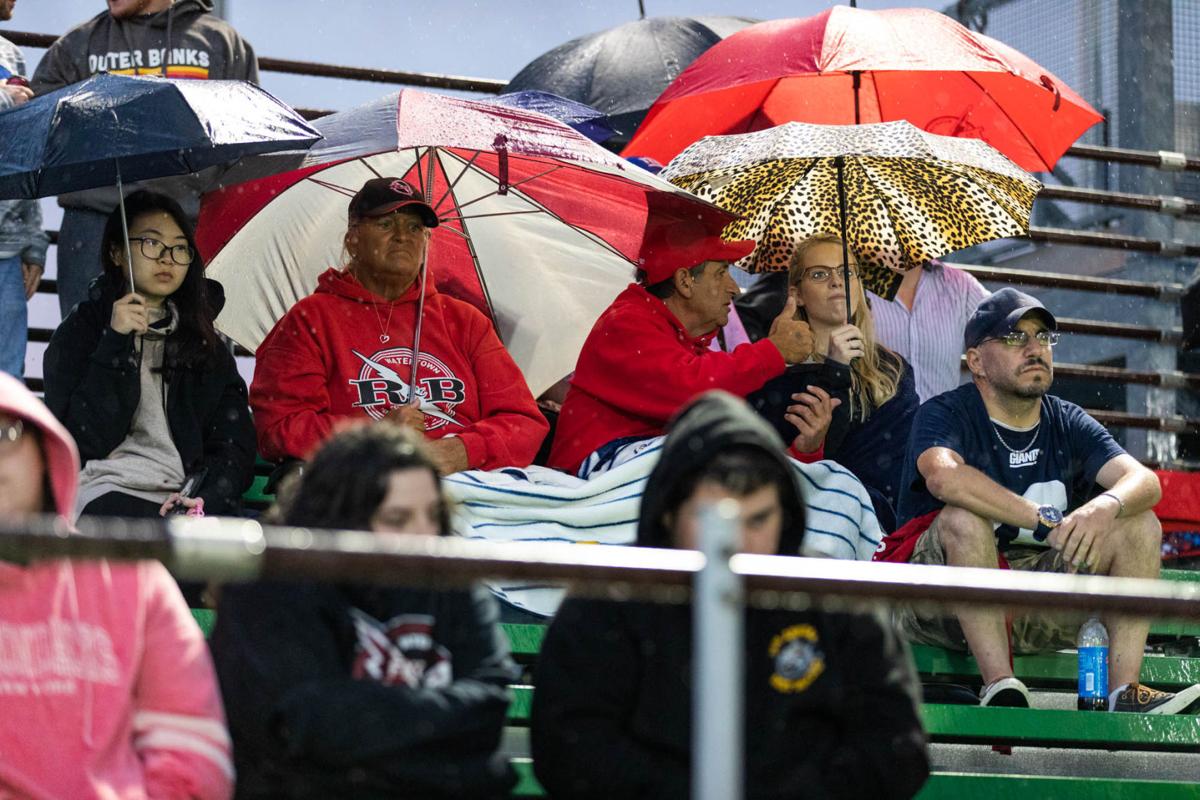 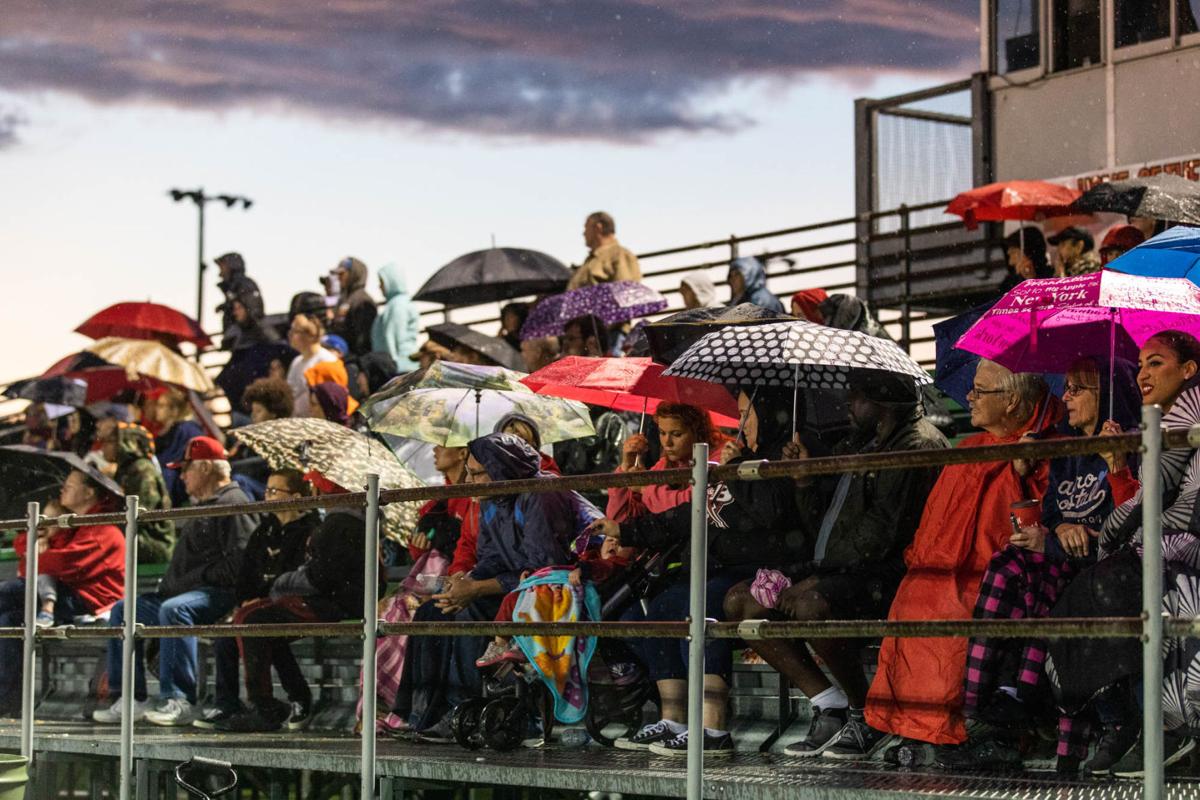 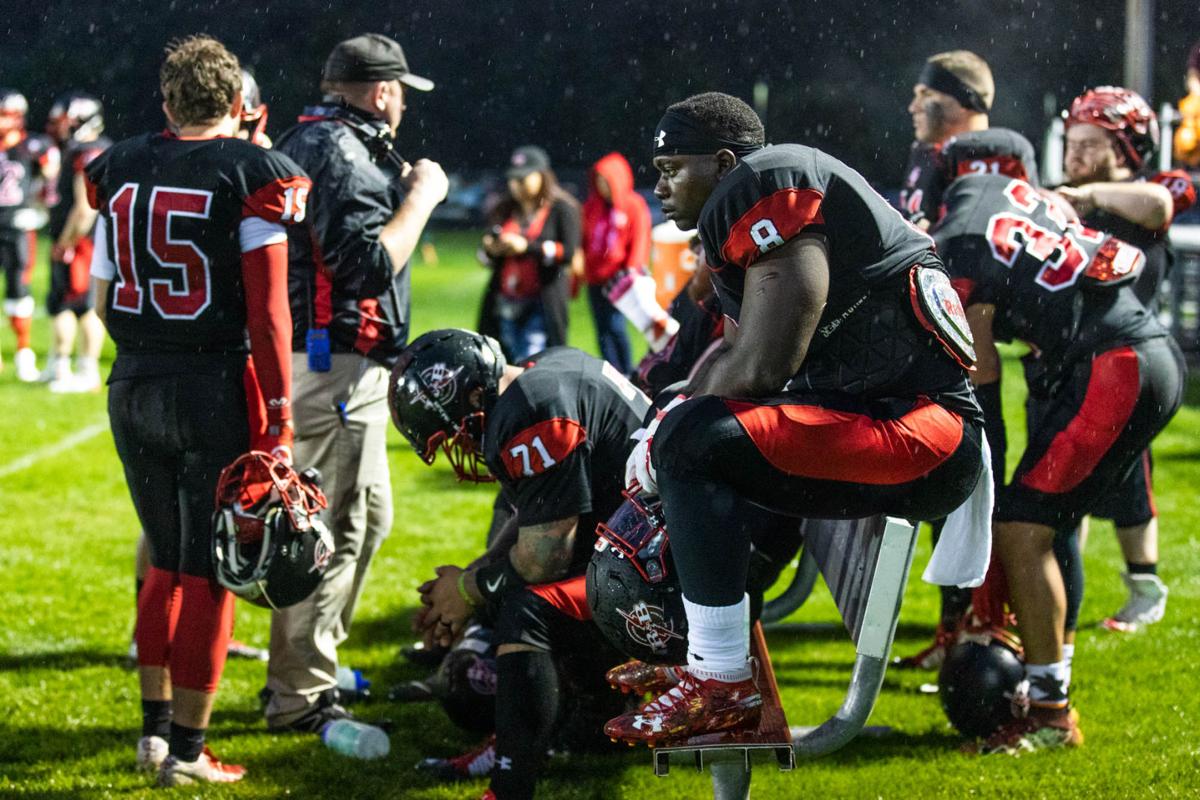 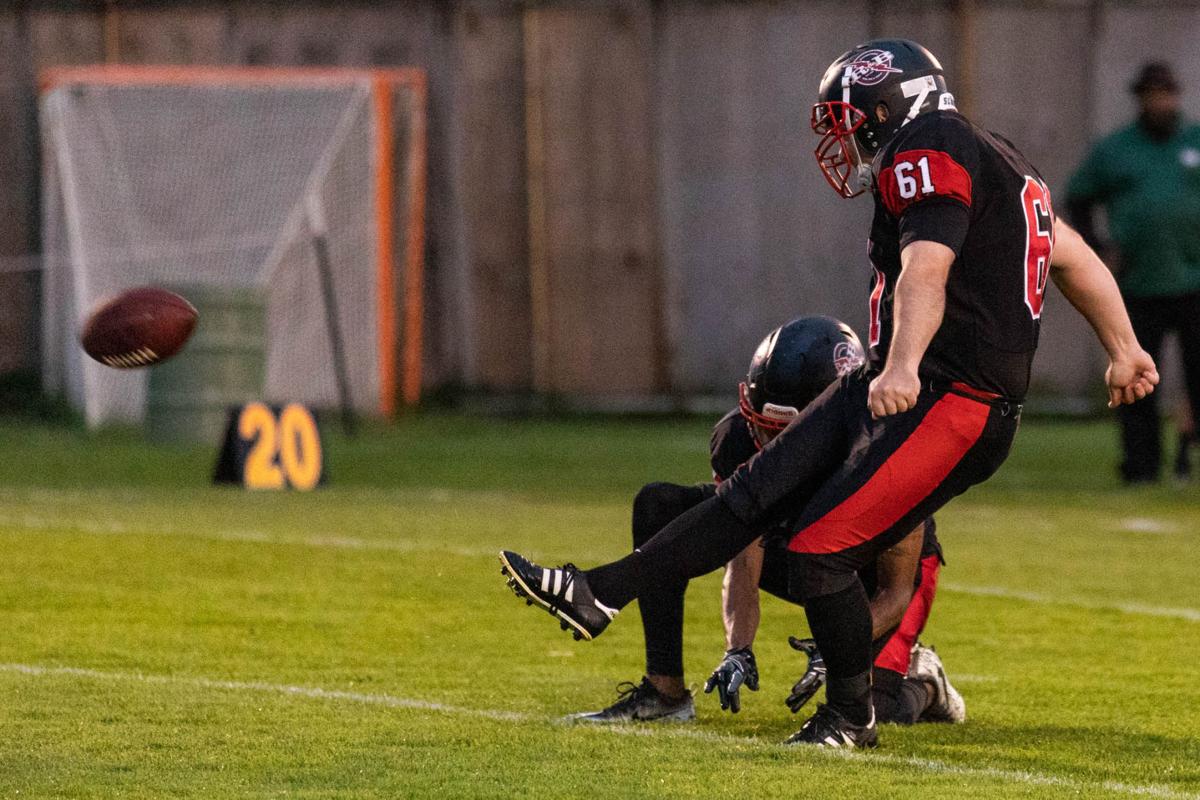 Watertown Red and Black fans sit in the bleachers with umbrellas as it begins to rain Saturday during a game against the Glens Falls Greenjackets in Watertown. Sydney Schaefer/Watertown Daily Times

WATERTOWN — The Red and Black has come a long way these past five weeks. Entering the fourth quarter with a 12-point lead Saturday, Watertown’s defense held tough for the final 15 minutes and earned its fifth straight victory with a 20-8 victory over Glens Falls at the Alex T. Duffy Fairgrounds.

Five weeks ago, the Red and Black may not have been able to hold that kind of lead, especially with its offense having stalled out. In fact, in week three against this same Glens Falls team, Watertown blew a fourth-quarter lead, allowing the Greenjackets to score 19 points in the final quarter.

But with the game on the line Saturday evening on a rain-soaked field, the Red and Black defense prevented Glens Falls from scoring and even forced three turnovers: a fumble around midfield, a Keegan Quieor interception at the Red and Black 25-yard line and an Alex Dalton interception in the red zone to close out the game.

Making the performance even more impressive was how many defensive players Watertown (5-3) was missing.

This forced people to play out of position. Connor Brown, traditionally an inside linebacker, moved to the outside and made the most of it. He blocked two punts and pressured Glens Falls quarterback Jonathan Hammond multiple times.

“He’s too quick off the edge and he’s able to get back there and he can chase down anything going to the other direction,” Bannister said of Brown. “That is a natural spot for him now.”

Brown thinks the last-minute switch threw off Glens Falls (2-5), which had prepared to see him at inside linebacker. Though the positions are adjacent to one another on the field, playing outside felt a bit different. “The angle is totally different from the outside,” Brown said. “There’s less commotion going on and that’s basically it. The angle is really different playing outside, I’m pretty fast and I can close that gap good.”

In the first half, Watertown looked like it would be putting on more of an offensive display rather than a defensive one. Joe Brennan, who started at quarterback, had already rushed for 67 yards, including a 46-yard touchdown run along with a touchdown pass. But two-thirds of the way through the second quarter, Brennan got hit and fell awkwardly, hurting his knee in the process. He was able to walk off the field on his own but did not return for the remainder of the game.

The Red and Black would score one more touchdown right before the half with backup quarterback Daquan Graves in to make it 20-0, but that would be the last of the offense.

TJ Williams and Tre Smith took turns running the ball for the majority of the second half, and while the Red and Black got close to scoring a couple of times, it wasn’t able to push the ball across the goal line.

With the offense stalled and Glens Falls gaining moment following a safety and a touchdown, the defense needed to tighten up.

“I was very satisfied,” George Ashcraft said of his defense’s performance. “They played a good game, they kept it intact and that’s all we ever ask for. They did a good job, I’m very proud of them.”

Watertown’s defense has seemed to improve a little bit every week.

“Playing more games is a big thing, getting that game time under your belt is a big thing and so is getting used to your team,” Brown said. “I think we got a really good shot at taking it all home this year, really. I think that’s the progress that this team is going to make, it’s just going to keep getting better and better.”

After an 0-3 start to the season, the Red and Black is not only in a position to make the playoffs, but can also earn a home playoff game with a win next week against Mohawk Valley and a Plattsburgh loss to Tri-City.