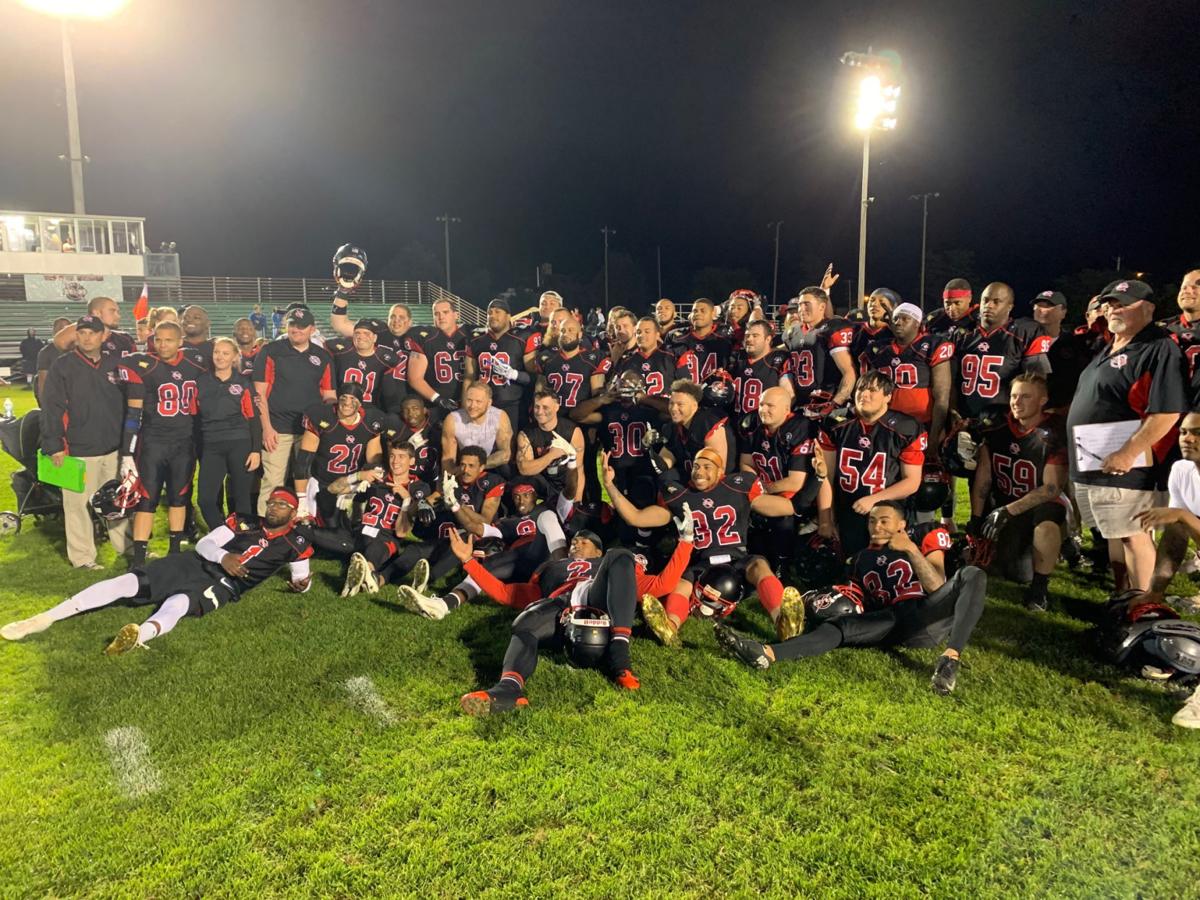 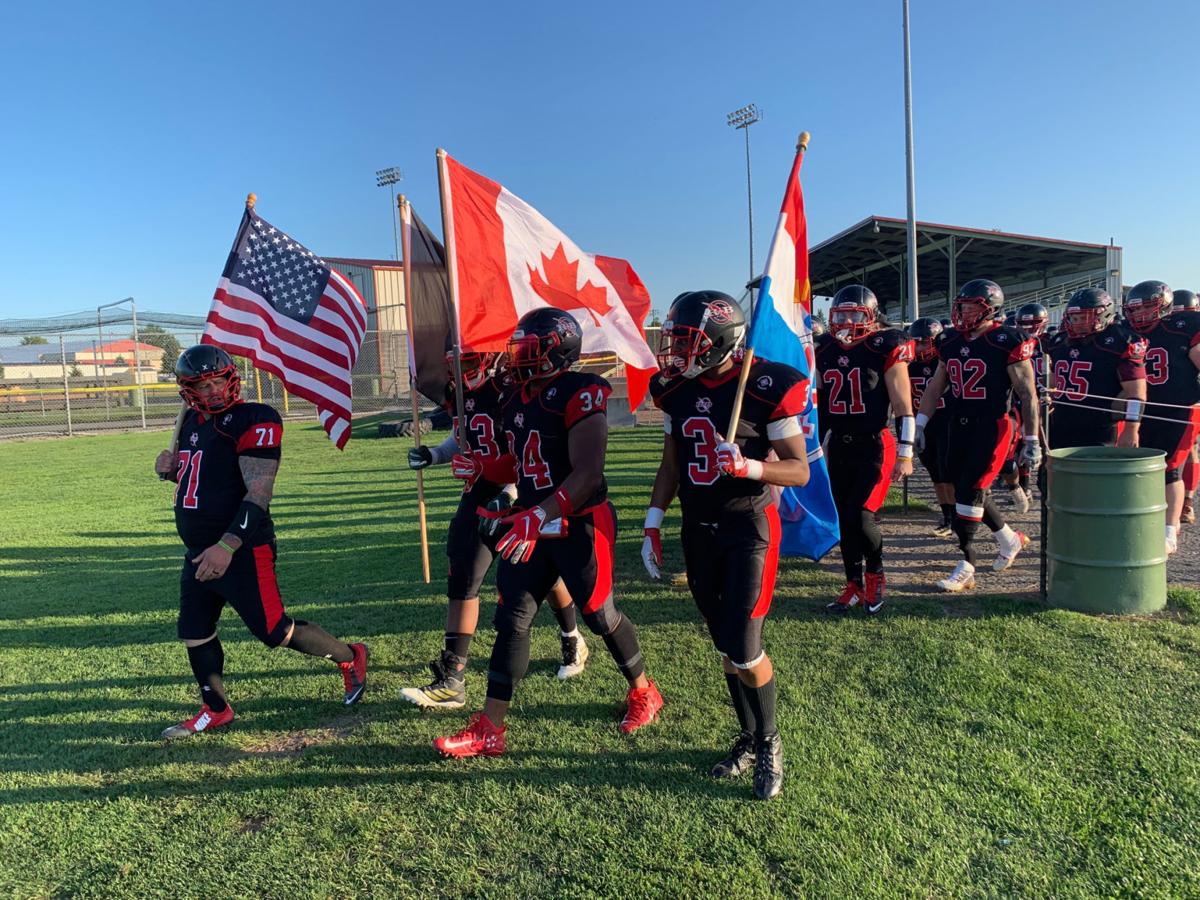 The Watertown Red and Black run out onto the field at the start of Saturday’s game against Schnectady at the Alex T. Duffy Fairgrounds. Philip Sanzo/Watertown Daily Times

The Watertown Red and Black run out onto the field at the start of Saturday’s game against Schnectady at the Alex T. Duffy Fairgrounds. Philip Sanzo/Watertown Daily Times

WATERTOWN — Jared Hendricks and Chris Furr knew exactly what play to run at the start of the Red and Black’s game-winning drive late in the fourth quarter against Tri-City on Saturday.

Lined up in a shotgun formation on the Red and Black 24-yard-line, Hendricks peaked right and saw Furr positioned along the opposing sideline with the cornerback five yards off of the line of scrimmage. Hendricks hiked the ball, made a quick look at Keegan Queior slanting up the middle of the field, then focused his eyes on Furr and unleashed a 36-yard pass that found the receiver in stride and resulted in a 76-yard go-ahead touchdown.

The score gave the Watertown Red and Black the lead and ultimately the 27-24 Empire Football League victory over the previously unbeaten Spartans.

Watertown takes the lead with less than two minutes left. Hendricks hits Furr with the 76-yard bomb. Red and Black up 27-24 with 1:45 left. pic.twitter.com/VgOD186gDr

Offensive coordinator Jared Law jumped into the arms of an assistant coach and pumped his fist while Furr’s teammates dog-piled him in the far end zone at the Alex T. Duffy Fairgrounds. It was one of Watertown’s more electric home wins in awhile. Furr said it was the most exciting of his seven-year career with the team.

“This right here is the most exciting win because it was a come-from-behind win,” Furr said. “We were down 18-7 going into halftime and we came out and we kept that momentum going, we actually added more momentum to it.”

Adding to drama was the fact that Tri-City entered the game 6-0 and in first place in the Empire Football League. The Spartans had also defeated Watertown (4-3) in week two of the season, 29-13.

As exciting as it was, Furr’s game-winning reception shouldn’t have come as a big surprise. The veteran receiver made a similar play at the start of the second half when Hendricks again hit him stride while he was sprinting down the sideline, resulting in a 54-yard touchdown. Furr finished with three touchdowns and 151 yards on five catches.

“That’s been open basically all game, everything has been open all game, so we were just like ‘let’s just go for it and see if it works, if it works it works and it worked.’” Furr said. “[The Tri-City secondary] had been bailing the whole night so they basically were giving me either short or deep routes, either way they didn’t win either one of them.”

Queior butted in to say that Furr is the “best in the league.”

Just as impressive as Furr’s catch was Hendricks’ throw. Henricks started all but one of the offensive series in the game and finished 11-for-17 with 227 passing yards and three touchdowns. His final one to Furr capped off one of his more impressive performances in a Red and Black uniform. That didn’t come as a surprise to Furr who has had confidence in the quarterback since last season. That confidence is mutual.

“Nobody can guard Furr, nobody,” Hendricks said. “Anybody we’ve played, nobody has been able to stop him. I was throwing the ball deep, so I trust him, he trusts me, I get the ball there and that’s what we do.”

Hendricks mixed in other targets. Six total receivers caught passes throughout the game, Phillip Tross had the second-most receptions and yards, going 3-for-34. Short passes mixed in throughout the game helped set the Red and Black up for the Hendricks-to-Furr dagger at the end of the game.

“[Furr’s] good but you can’t go to the well with that every time,” Red and Black head coach George Ashcraft said of the deep ball play call. “Him and Keegan can be open 99 percent of the game but it’s hard for a quarterback to see them because he’s scrambling and you can’t always throw long balls because then people back up on you. But we threw underneath, that was the key tonight. Those underneath passes that were caught and were for first downs.”

Pandemonium ensued following Furr’s go-ahead score, but a minute and a half still remained in the game with Tri-City only trailing by a field goal.

After starting their drive at midfield, the Spartans managed a first down but came up short on fourth down a few plays later.

Watertown linebacker Derrek Dalton said that the Spartans’ effective play-action game prevented the defense from assuming pass or run in the final minutes.

“We couldn’t dictate it by that because they were running a lot of play action and they were disguising their plays really well,” Dalton said. “So, we just came out on the balls of our feet ready to go. We knew we needed four stops to get out of there.”