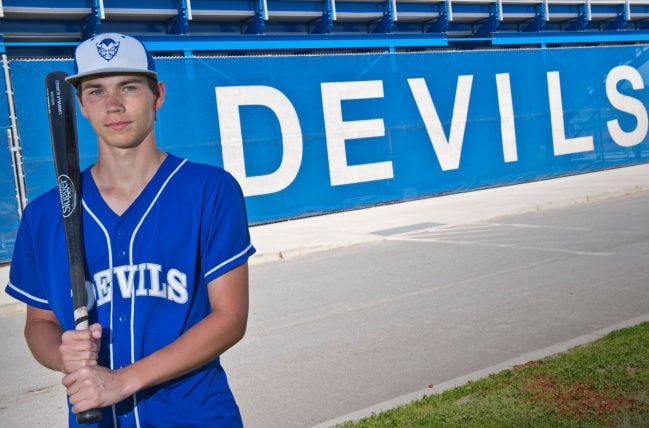 CHRISTOPHER LENNEY/WATERTOWN DAILY TIMESOgdensburg Free Academy’s Ethan Baldwin, who has committed to play next season for St. Lawrence University, is the Times All-North MVP for the Northern Athletic Conference.

CHRISTOPHER LENNEY/WATERTOWN DAILY TIMESOgdensburg Free Academy’s Ethan Baldwin, who has committed to play next season for St. Lawrence University, is the Times All-North MVP for the Northern Athletic Conference.

OGDENSBURG — The Bard, William Shakespeare, penned the play “Much Ado About Nothing”.

The pitcher, Ethan Baldwin, brought the theatrical spoof from the stage to the mound for Ogdensburg Free Academy this season, drawing rave reviews by forging some unprecedented strings of zeroes.

After giving up a home run in rainy and cold conditions in a preseason game against Watertown, Baldwin did not allow an earned run in the Northern Conference Central Division season or the Section 10 Tournament, going 7-0 with three perfect games and four no-hitters. He suffered his only loss of the season in a 4-0 decision to Section 2 Champion Schylerville in a state quarterfinal and finished with a 0.68 earned run average and 114 strikeouts to only 13 walks in 51 innings.

He became the first pitcher in state baseball history to throw more than one perfect game in a season and his four no-hitters in one season stand second all-time to Billy Rouse of Rush-Henrietta who pitched five no-hitters in 1960.

His unrelenting effectiveness on the mound coupled with a .351 batting average led 16-3 OFA to share of the NAC Central Division title with Massena at 11-1 and a ninth straight Section 10 Class B championship.

On the final day of the regular season he threw a perfect game to hand Massena its only loss in divisional play and his third perfect game came against Potsdam in the sectional championship game.

Baldwin also batted .381 on the season and was honored as the NAC Central MVP, as the recipient of the 2019 Jim Pinkerton Memorial Award presented by the Northern New York Umpires Board. Today he is recognized as the NAC MVP of the Times All-North Team.

“What Ethan did this season was truly outstanding. Throwing three perfect games and four no-hitters is amazing and he did it is tough situations,” said OFA coach Larry Mehaffy. “He pitched his second perfect game to beat Massena for a share of the Central title and the third came in the Section 10 Championship game.”

Baldwin carried his success from the high school season to the American Legion season for the Brockville (Ont.) Bunnies who won the Border Wards Tournament in Malone. He struck out 13 in a one-hitter in a win over the Ottawa Nationals.

While taking great pride in his individual accolades, Baldwin said that the achievements of the Blue Devils were the top highlights of the season.

“Winning a share of the Central Division title was extremely important because it is so tough to do. Massena always has a tough team and always gives us great competition,” said Baldwin who ranks 10th in his class academically.

“We had a great team and we accomplished a great deal as a team. It was a lot of fun.”

Baldwin believes that his enormous success started with his preparations for the season where he went from very good to a great pitcher.

“I owe a great deal to my training with Seth Douglass, who is an assistant coach at SUNY Canton, Working with Seth, I increased my strength and fine-tuned my mechanics,” he said. “I felt massive improvements and raised the velocity of my fastball from 85-86 to 90-91 miles per hour.”

He looks to continue that off-season improvement to make a smooth transition to the college ranks for St. Lawrence University.

“I have to keep working hard in the weight room to get bigger for college. There are two kinds pitchers, guys that throw very hard and guys who have a lot of junk,” Baldwin said. “I want to be able to pitch in both of those ways.”

Coach Mehaffy believes that Baldwin’s development as leader paralleled his maturation as a pitcher.

“Ethan truly loves the game of baseball and he is a true team leader. He loves to share his experience and knowledge with modified and JV players and even guys on other teams,” Mehaffy said. “In a game against Gouverneur this year. He was playing third base and offering a Gouverneur player some advice on his swing.”

Baldwin also proved to be a very astute study and thought he learned a great deal about being an OFA ace as a youngster watching Seth Pinkerton who went on to become a collegiate standout at the University of Hartford and a Major League Draft selection by the Minnesota Twins.

“I learned the North Country attitude from Seth Pinkerton,” Baldwin said. “He showed me that it doesn’t matter where you come from and that if you work hard you can do anything.”