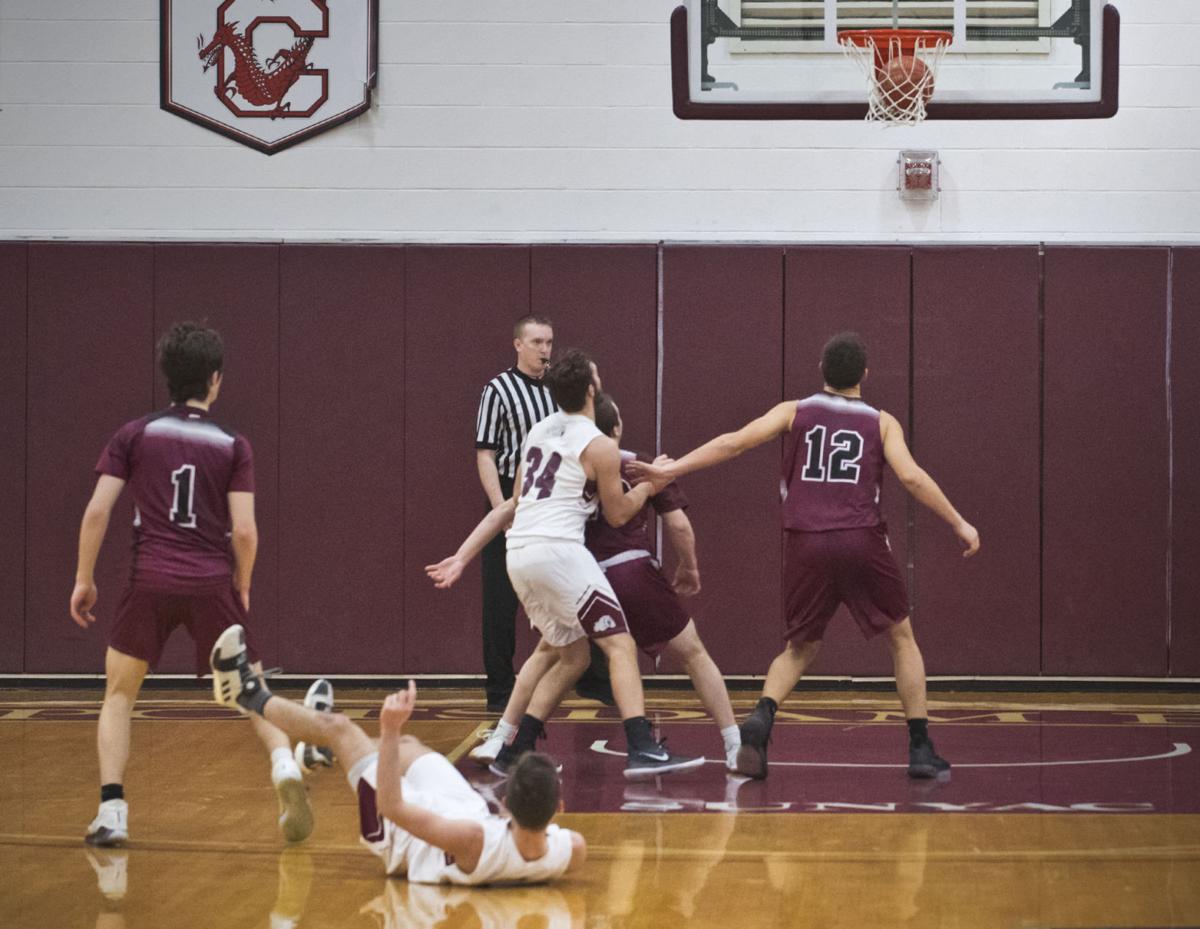 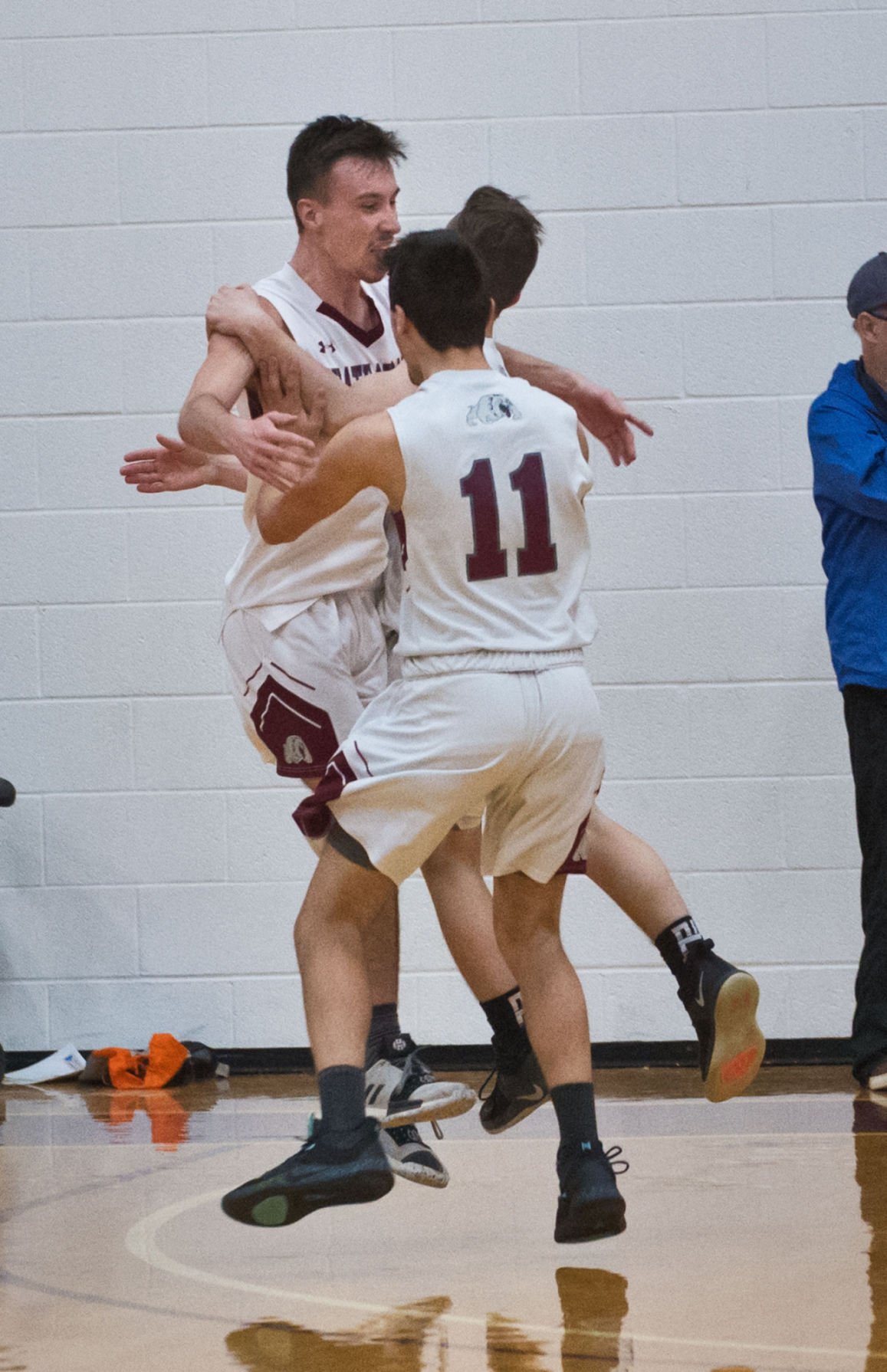 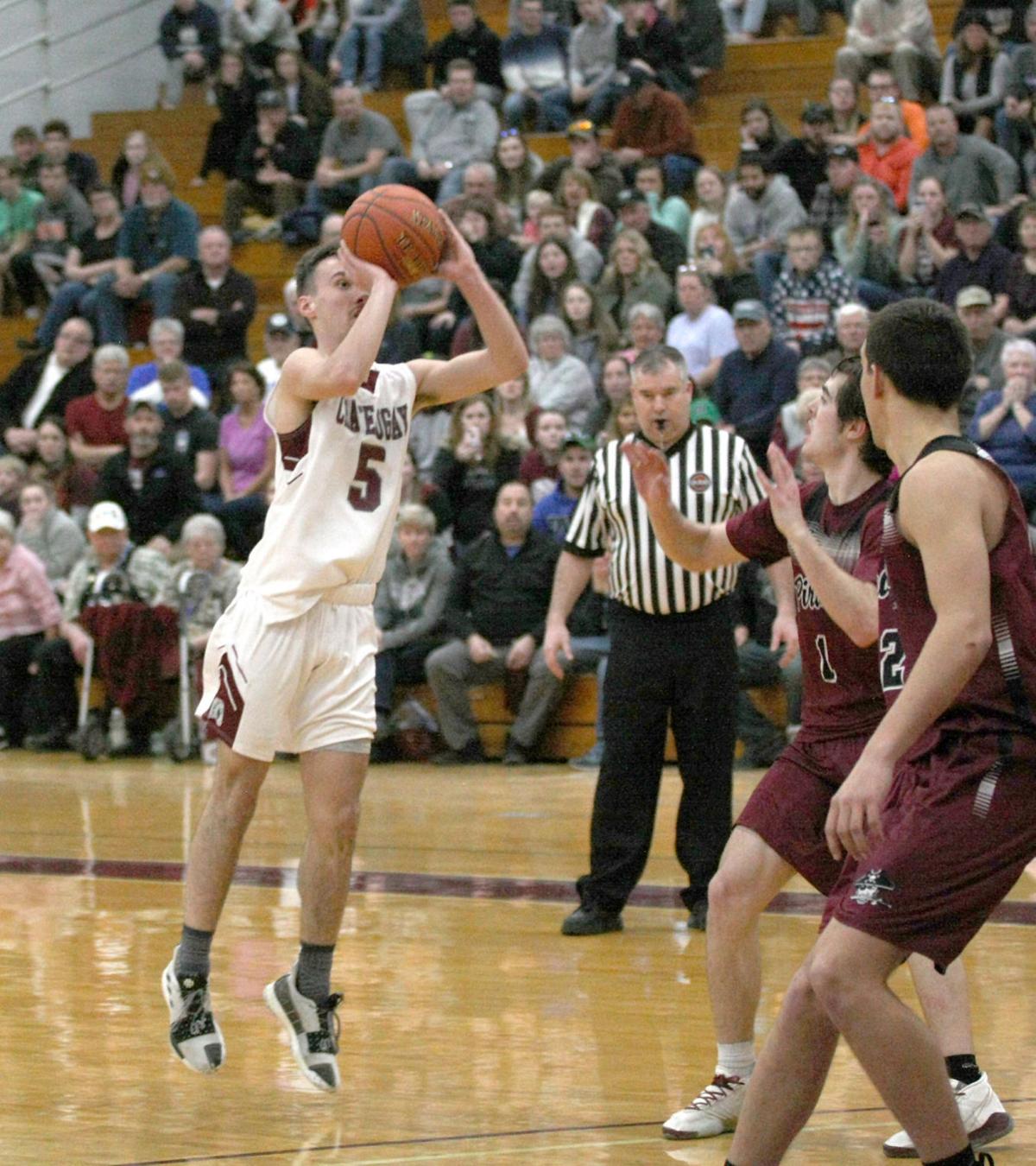 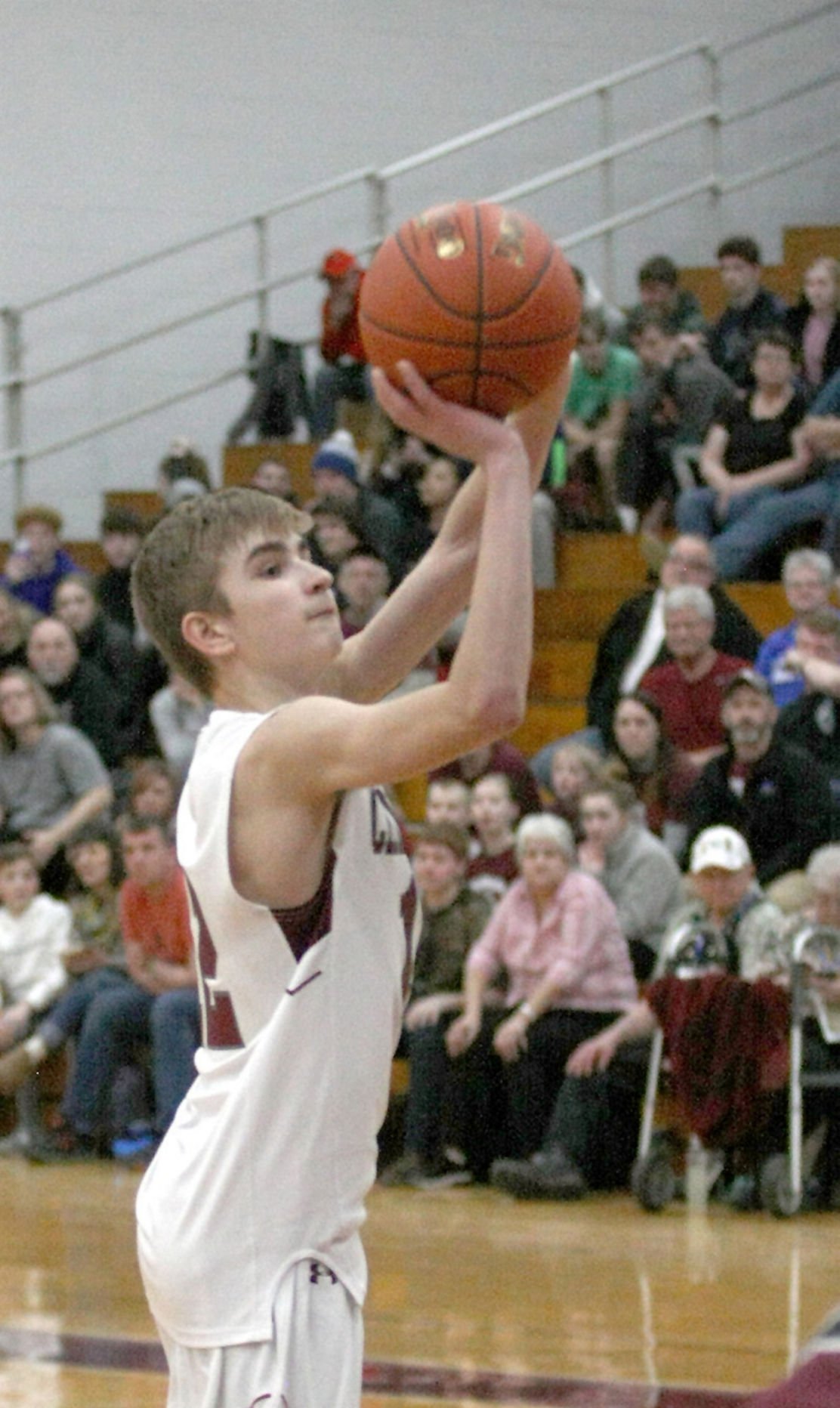 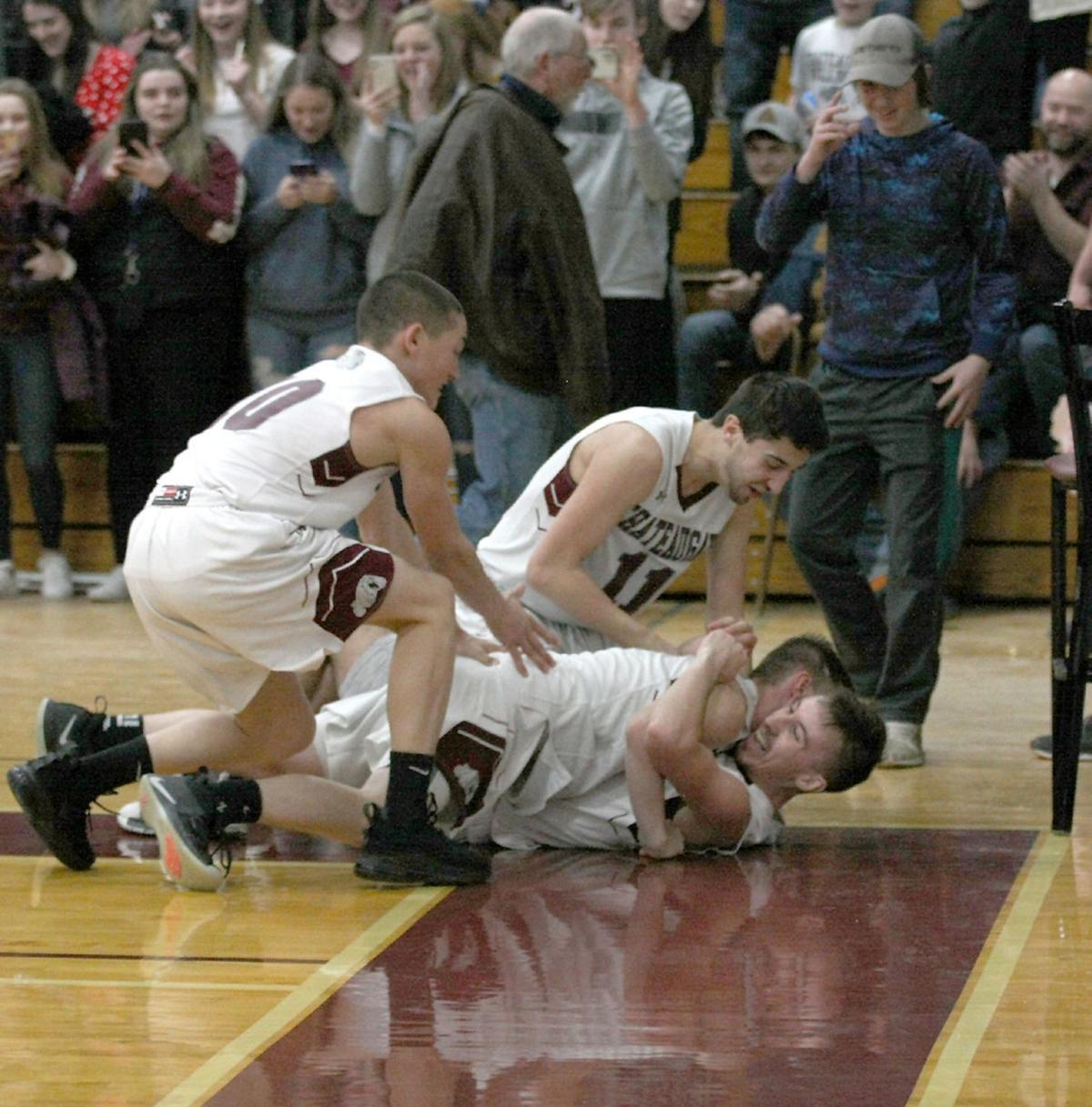 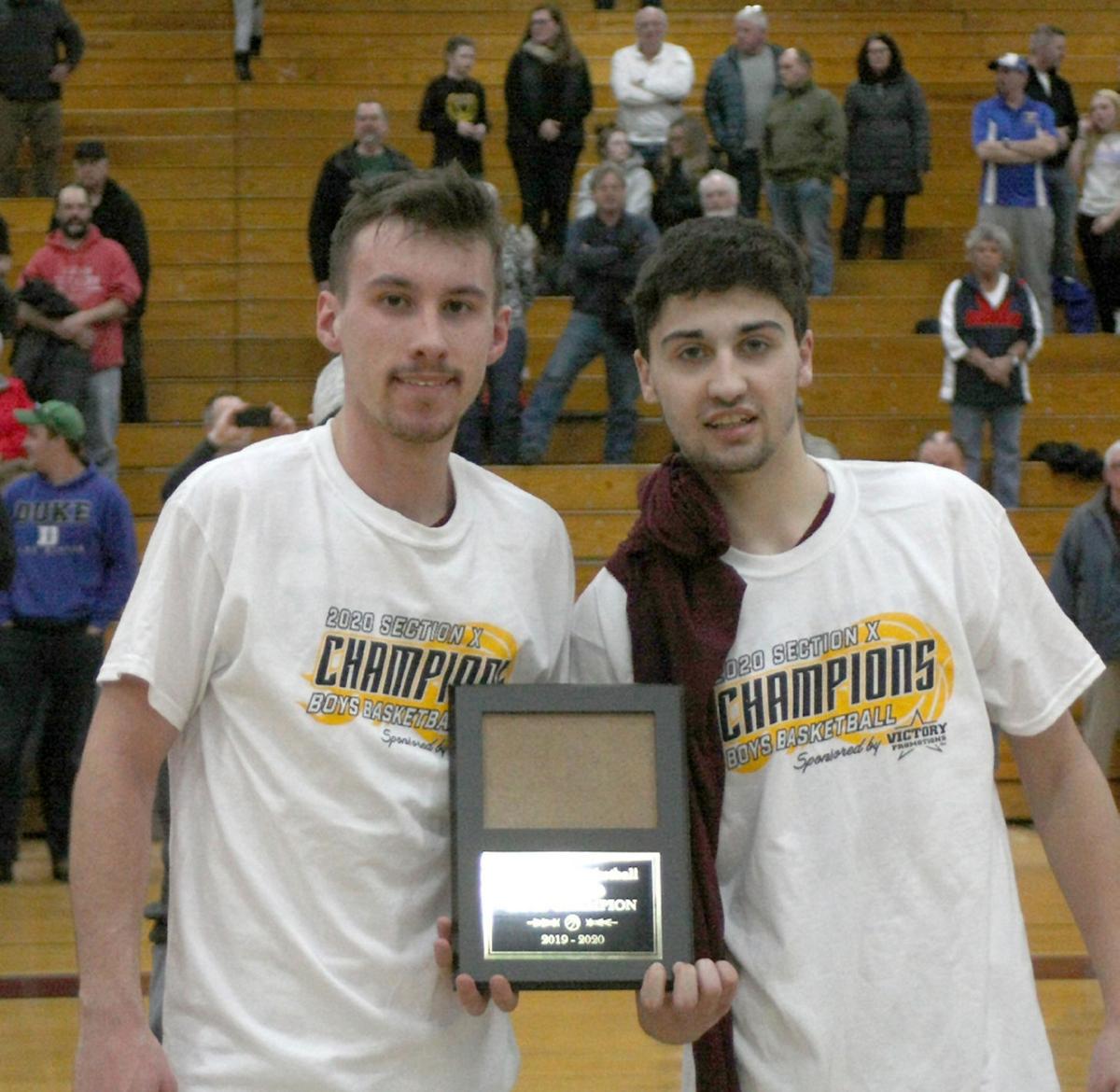 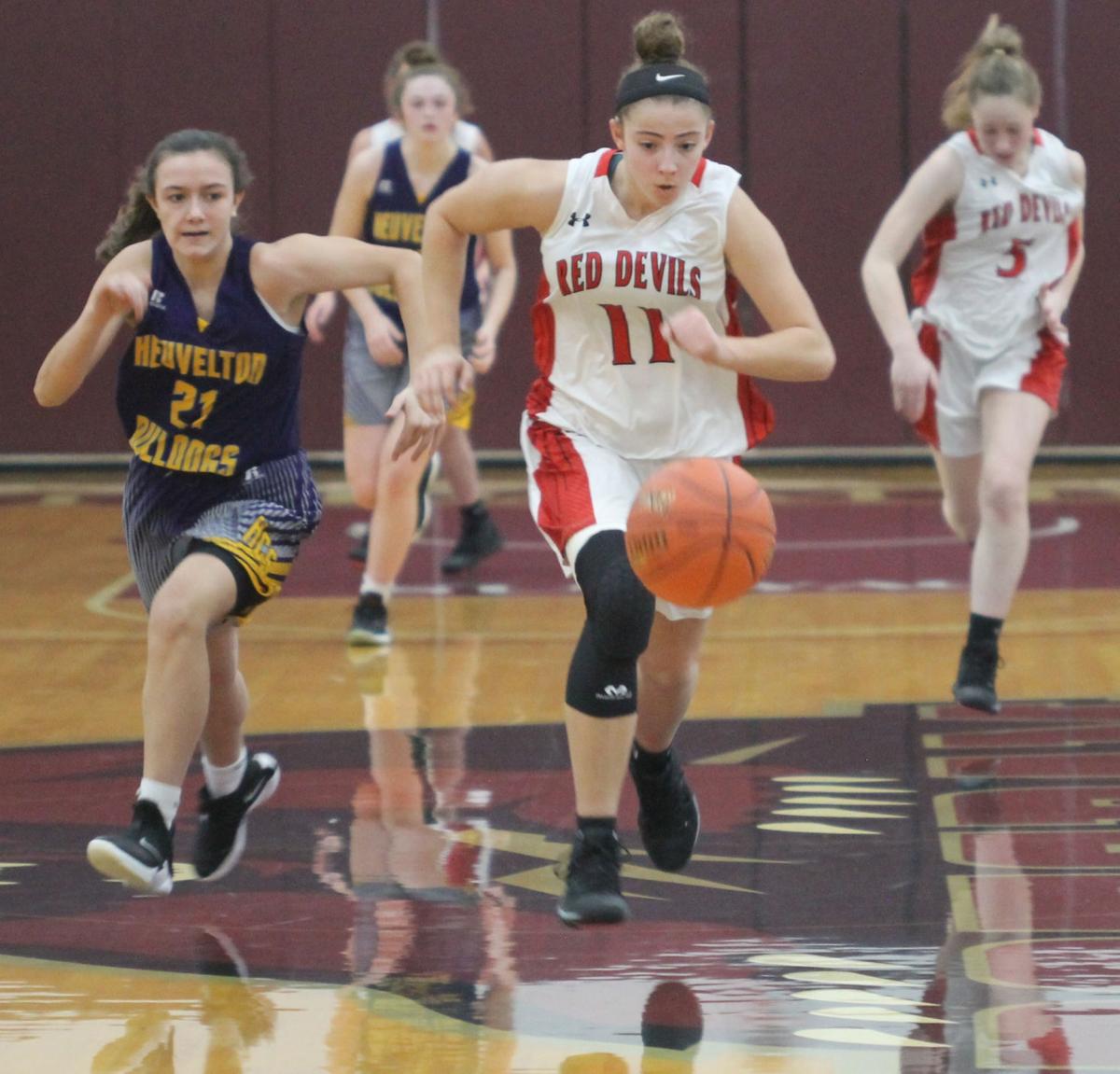 Harrisville, the defending Section 10 and state Class D champion, jumped out to an early lead against the Chateaugay Bulldogs in the Section 10 Class D title game, but the state’s current No. 1 had the final say in recording a dramatic, 63-58 come-from-behind win to claim the crown and a state title berth.

Chateaugay moves on to complete in the state playoffs beginning at noon March 7 at Onondaga Community College in Syracuse.

In the earlier girls Class D championship, Hammond avenged its only loss of the season by defeating Heuvelton, 64-35, and advancing to the state tournament. Hammond, a two-time state champion, will begin its title quest March 14.

Chateaugay, now 23-0 on the season, rallied from four separate double-digit deficits – CCS was down 12 points midway through the second quarter – pulled even for the first time late in the fourth, took its first lead of the game with 51 seconds remaining in regulation, then secured its championship-game win with a pair of clutch free throws from a freshman – with 7.8 seconds showing on the clock.

The win advances the East Division champion Bulldogs into the state playoffs on Saturday, March 7, at Onondaga Community College in Syracuse. The noon start will be against a yet-to-be-determined Section 3 champion. Before Chateaugay begins its state run, the team will be the No. 1 seed in the Section 10 Overall tournament of champions, with a semifinal round contest at 6 p.m. on Tuesday against Class A champion Franklin Academy. In the 8:30 p.m. semifinal, Madrid-Waddington takes on Class B champion Ogdensburg.

The Bulldogs’ game-changing sequence began with freshman Walker Martin making a steal in the backcourt and going the length of the floor for a contested lay-up to tie the contest at 58-all with 1:33 remaining. After timeouts were taken by both coaches, the Pirates (18-5) turned the ball over on a shot clock violation, which set the stage for the Bulldogs’ go-ahead bucket – a 3-pointer from the top of the key by senior Jonah McDonald, who watched the ball swish through the netting from the seat of his pants after a no-call knock down.

The Pirates came back down the floor and put up a pair of off-the-mark attempts, with McDonald securing a crucial rebound with under 10 seconds left. Harrisville was forced to foul twice to put Chateaugay into the one-and-one bonus and have a chance at regaining the lead in order to repeat as sectional champs. The player they chose to put on the line was the freshman Martin, who calmly sank both charity tosses to secure the Bulldogs’ five-point victory and end Harrisville’s three-year run as sectional champs.

The Pirates took control at the outset and steadily worked toward the first double-digit lead of the game, 17-7, then went on to hold an 18-10 lead after the first quarter. Chateaugay cut its deficit to three points, 18-15, early in the second quarter, but the Pirates went on a 12-3 run to gain their biggest lead of the game with a 12-point cushion. Chateaugay stayed with its normal offense, gradually chipped away at the Harrisville lead and managed to pull to within four points, 31-27, at the half.

It looked like more of the same to begin the second half as it did in the beginning, with Harrisville increasing its lead back to nine points, 38-27, on three straight buckets, including a 3-pointer from senior Nolan Parow. Chateaugay stayed within striking distance for the rest of the stanza and finally cut its deficit to three points, 49-46, on a Martin triple to end the third.

The Bulldogs pulled to within one point, 49-48, on a Carson Richards deuce to open the final eight minutes of playoff action, with the two squads exchanging points until the Pirates moved back in front by five on a Will Taylor triple. Jonah McDonald countered with a trey of his own and Martin followed that up with his game-tying steal and score, and the rest as they say, is history.

“Epic, simply epic,” stated Chateaugay assistant coach Jason LaPlante following the championship-gam win. “This is what high school sports is all about.”

“I can’t tell you how proud I am of these kids right now,” said a jubilant and teary-eyed Chateaugay head coach Mike Martin. “Not once did they ever give up. Not once did they quit. They stayed with the game plan and, just as they have done all season long, they believed in themselves and their teammates.

“We came up with some really big stops, especially in the end. Walker’s steal and hoop to tie it, and Jonah’s three to put us ahead. It’s unbelievable. It’s an amazing feeling,” continued the elder Martin. “They (Harrisville) have been where we want to go (state title), and this is a really big step toward that.”

The Chateaugay coach also noted that the Bulldogs changed up their defensive look late in the game.

“We went to a box-and-one against Jadon (Sullivan – West Division MVP). He’s too good of a player and we weren’t about to let him beat us,” recalled Martin. “Again, we had guys come off the bench and contribute some big minutes and big plays. Silas (Lewis) really stepped up and had a big-time game and Carson (Richards) also was huge inside with five timely rebounds.

“Let the ride continue. It’s been a great one so far,” Martin concluded.

Nearly lost in the Bulldogs’ dramatic playoff victory was the fact that Chateaugay senior Jonah McDonald achieved yet another Section 10 milestone and became the first boys basketball player to reach the 2,000-point plateau in career scoring. The two-time East Division MVP drained a 3-pointer with 6:07 left in the third quarter to become just the fifth player in section history (Missy West, 2605 points; Paige McCormick, 2452; Courtney Poirer, 2076; Patty Myers, 2014) to surpass that lofty point total. He has 2,016 career points with, at the worst, two games left and at the most, five.

McDonald capped off the playoff win with yet another double-double performance, scoring a game-high 33 points and grabbing a team-high 14 rebounds, while adding five assists and four steals to the victory.

“Jonah, once again, showed how special he is,” added LaPlante. “That shot he hit to give us our first lead was crazy. He also dominated the defensive glass, and to score his 2,000th point and hit that (go ahead) shot in the same game is pretty cool.

“This is a game these kids will remember the rest of their lives,” LaPlante projected.

The younger Martin followed McDonald in the scoring column and finished with a 12-point game, while Lewis came off the bench and scored 10 points, including a pair of 3-pointers. Jed McDonald added six points and five rebounds to the victory, while Richards chipped in with a deuce. Chateaugay was also perfect from the foul line, making all nine of their attempts, but were outscored in buckets from behind the arc, as Harrisville tossed in nine treys, while the Bulldogs connected on eight.

Sullivan and Parow paced the Pirates (18-5) with 14 points each, while Adam Szlamczyski followed with 13 points. Will Taylor tossed in 10, as Nathan Schmitt rounded out the scoring with seven.

“I was only four or five at the time but it was an amazing experience for everyone and since then, I’ve wanted to follow in my sister’s footsteps,” said Kenyon after tossing through a game-high 23 points as Hammond reversed a season-opening loss to NAC West rival Heuvelton to win the Section 10 Class D championship game at SUNY Potsdam.

The Red Devils, who have rattled off 22 straight wins since falling at home to the Bulldogs on Dec. 4, will begin the chase for a third state title on March 14 with a quarterfinal round game against the Section 3 champion at Onondaga Community College’s SRC Events Center in Syracuse.

“We got down by seven points in our last game against Edwards-Knox and it was more of a matter of us settling down,” said Hammond coach Shawn Dack, who is making his first trip back to the state tournament with the Red Devils since being denied a third straight state crown in 2009. “Today, we let loose and just played basketball the way were capable of right from the start.”

Dack reflected on the high level of competition among Section 10 D schools and its ability to prepare teams for states.

“Every team is different but something that hasn’t changed is how the Class D teams in Section 10 have constantly pushed each other to the point where any team that we put out has the ability to win states,” he added. “I’ve felt like we’ve had teams that were good enough to get out of our section the last few years but for whatever reason, we didn’t. Our core four players — Hailey Cunningham, Avery Kenyon, Kelsey Bennett and Kylie Vaughan — have been in these Class D wars before and they proved they were battle-tested today.”

Along with Kenyon, the other three core players also reached double figures in scoring with Cunningham netting 14 points, followed by Bennett with 12 and Vaughan with 11.

“Hammond is really rolling right now,” said Heuvelton coach Rob Powers. “They are firing on all cylinders and I don’t know if anyone can beat them at this point. We beat them in their first game and that might wind up being their only loss of the season if they keep playing the way they have been.”

Hammond opened with six straight points but only led 8-5 after Cameron buried a 3-pointer with 4:37 left in the first quarter. Kenyon countered with the first of her two threes of the game on the next possession, sparking what turned out to be a pivotal 12-4 run that put the lead at 23-9 through the first quarter. Hammond went on to stretch to lead to 33-13 by halftime and never looked back.

“We had gone to the final four in soccer and I think we were still in soccer mode the first time we played Heuvelton,” Kenyon said. “We have really come together as a team since then.”

“It’s an amazing feeling right now for everyone but we need to keep calm and keep working hard if we want to keep going,” she added. “All coach wants us to do is focus on the moment now and not look too far ahead.”