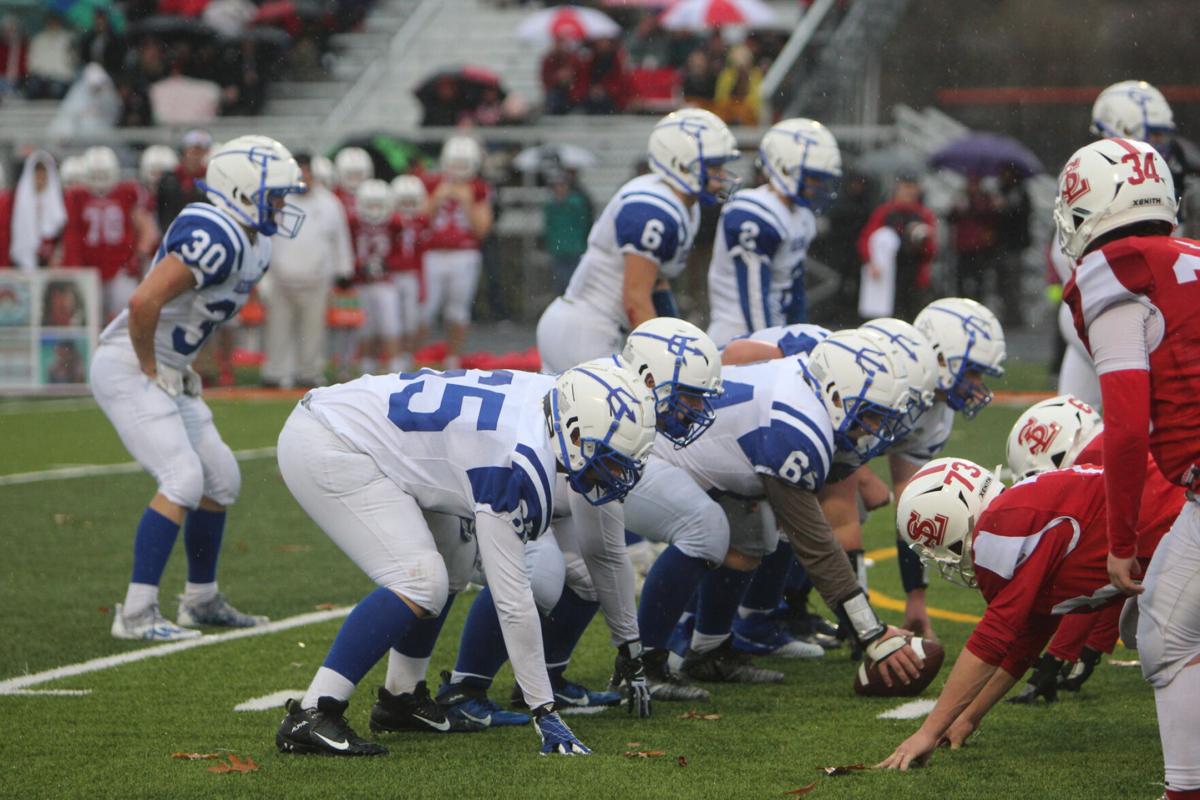 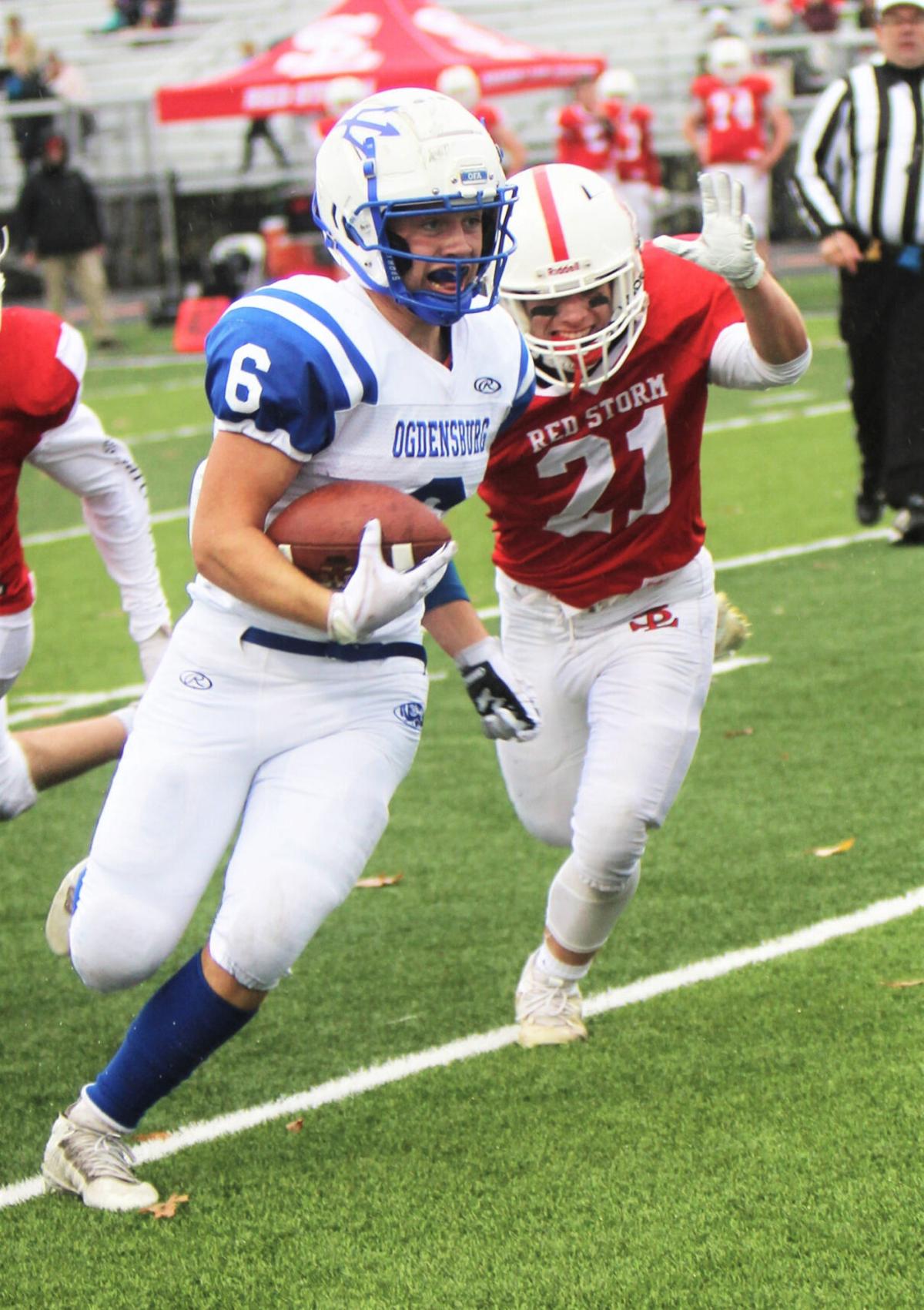 PLATTSBURGH — The flow of a football game can shift in the blink of eye.

Even if the decisive play involves very little yardage.

Late in the third quarter the Red Storm had mounted a drive toward breaking a 14-14 halftime tie behind elusive running back Carter Hewitt, who had rushed for 120 yards in the first half.

With the ball at the OFA 23 Hewitt made a great read and bounced outside to meet Piercey in a jarring open-field collision. The ball was knocked loose and Piercey grabbed it.

OFA quarterback Tristan Lovely fanned the spark of the momentum change, finding slot back Adam Calton running free behind the secondary for a 42-yard connection. That connection set up a 16-yard touchdown run by Andrew Loffler, who knifed between two defenders at the corner of the end zone for the touchdown with 58 seconds remaining in the third quarter. Lovely found running back Drew Costello for the two-point conversion.

“I had a terrible first half and at halftime the coaches talked to me and really pumped me up,” Piercey said.

“On the fumble I made a good hit and I saw the ball come close and I grabbed it. I think it turned the game around.”

The Blue Devils (9-1) next face Section 2 champion Schuylerville next Saturday at a site to be determined in Section 10.

Piercey’s forced fumble and recovery was followed by a series of big defensive plays in the fourth quarter, which allowed the Devils to pitch a shutout in the second half against Saranac Lake and Hewitt, who used quick cuts and tackle-breaking bursts of speed to gain 195 yards on 25 carries.

Piercey brought down Hewitt from behind just when it appeared the Red Storm trooper would race off a to big gain. With 2:12 remaining in the game Piercey then made a leaping interception where he tapped the ball away from the receiver and to himself for a 15-yard return.

“I saw the ball coming and I knew it would be slippery so I tapped it to where I could grab it. I didn’t see anyone near me so I just ran around looking to take some time off the clock.”

Other defensive gems at clutch time for the Devils included a fourth down quarterback sack by tackle Archie Green, who figured in eight tackles and a close-out tackle by Lovely, who turned a swing pass to Hewitt into a seven-yard loss.

The Devils (9-1) finished the win with the biggest offensive play of the game when running back Drew Costello followed a great block, turned the corner on a sweep and sprinted 61 yards down the left sideline for the score.

“We did not have a good first half at all defensively. But we came up with big defensive plays in the second half and beat a very good Saranac Lake team which had an outstanding running back,” said OFA coach Matt Tessmer.

“Senior leadership really carried us and the biggest thing about this game is that we are still playing. We will host the Section 2 champion in Section 10 on Saturday. This will be a very tough game and we need a great week of practice.”

The first half saw 11th-ranked OFA come from behind twice by answering touchdown runs of three and 23 yards by Hewitt and a pair of PAT kicks by Landon Faubert.

In the first quarter Lovely reached the ball over a pile of players to score on a one-yard sneak and came back to find Calton for the two-point conversion.

In the second quarter Lovely zipped a 10-yard slant-in touchdown pass to Justice McIntyre after lofting a 37-yard pass to a wide open Calton. Calton and McIntrye (2-20 TD) also intercepted passes in the first half and flanker Alex Worden got the passing game started with a 12-yard catch.

“Adam Calton has really become a clutch receiver for us,” Tessmer said. “He had two huge catches for us today and came very close to coming up with a great catch in the end zone on the final play of the first half.”

“And Tristan Lovely had some big runs for us again today.”

“Not many people thought we would get this far but we did.”