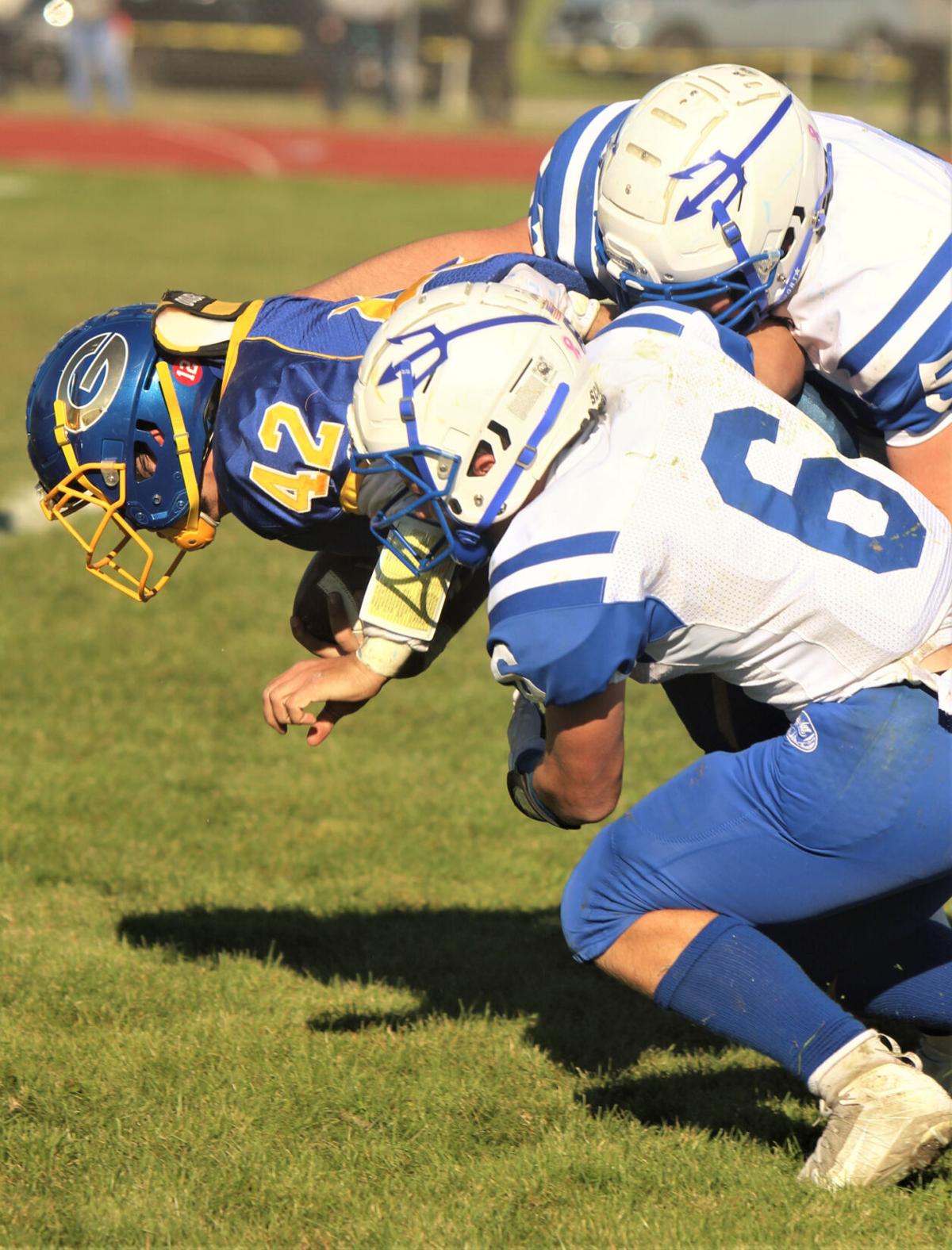 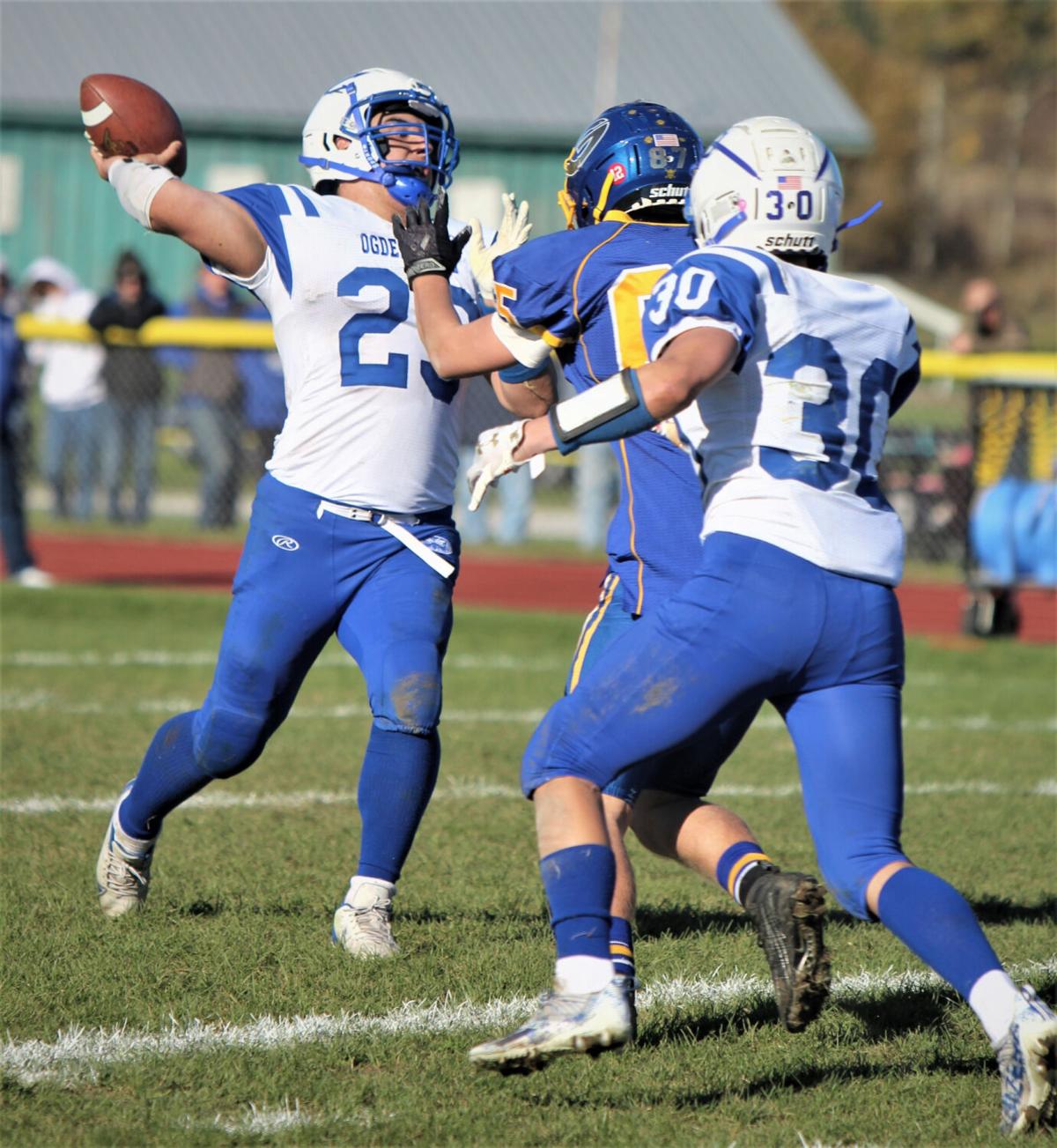 GOUVERNEUR — There were a lot of big plays in OFA’s 32-12 victory over Gouverneur in the Section 10 Class C Championship football game Saturday at Frank LaFalce Field.

There were plenty of big omissions, too, as exposure to the COVID-19 virus forced several members of the Gouverneur team into quarantine and out of the highly anticipated game between the two schools two days before the title clash.

With the victory the Blue Devils (7-1) advanced to a state tournament game with the Section 7 champion Saturday at 1 p.m. at Plattsburgh High School.

One of the biggest plays Saturday was a punt, usually an after-thought in a high stakes contest. With the Blue Devils leading 8-6 early in the second quarter the Wildcats forced OFA to punt.

OFA quarterback-linebacker Tristan Lovely launched a long punt that rolled out of bounds at the Wildcats’ one yard line. The Blue Devils then forced a Gouverneur punt from their own end zone, took possession at the Wildcats’ 20 and scored on a five-yard run by Andrew Loffler and a Lovely pass to Adam Calton for the two-point conversion.

The Devils upped their margin to 24-6 after a blitzing Lovely made a leaping fourth down interception at the OFA 10. The theft started a scoring drive that climaxed with Lovely throwing a six-yard touchdown pass to Drew Costello (3-for-45 receiving, 11-52 rushing) with six seconds remaining in the half and coming back to find Costello for the two-point conversion.

Gouverneur’s lone touchdown of the first half came on a 21-yard keeper by Northern Athletic Conference Defensive MVP Gabe Wainwright, who ran relentlessly for 142 yards on 23 carries playing his first high school game at quarterback ever.

Lovely (13-for-26, 78 yards), in his first full season at quarterback, left his imprint all over the game where he passed for two touchdowns, ran for 85 yards and several first downs, and passed for three conversions and ran for a fourth. He also came up with a solo tackle to stop the Wildcats’ two-point conversion attempt on their first touchdown.

Calton opened the scoring run with a one-yard run and Lovely passed to Justice McIntyre for the conversion,

“Tristan has really developed well as a quarterback this year and we are very happy with his play,” said OFA coach Matt Tessmer.

“We took control of the game in the second quarter. We played well today and this team has worked very hard all season and dealt with a lot of things in the past two seasons. We have earned everything we have achieved.”

Gouverneur (6-1) suffered its first loss of the season as OFA answered its 29-28 overtime loss to the Wildcats on Oct. 9 with the victory.

Gouverneur coach Sean Devlin, despite the defeat, expressed the pride he felt for his Wildcats, who won a fifth straight NAC title, delivering a statement following the game.

“This week we were dealt a bad break, Quarantine hit our team pretty hard and it affected the outcome of the game without a doubt,” he said. “We have proven this year that Covid is the only thing, when we are fully loaded with players, that has bested us. We had a day and a half to prepare for a championship game with several players playing out of position. I think our guys did a great job and worked their tails off, as did our coaches, to make it a competitive game under less than an ideal situation. I am appreciative of our school administration for trusting us coaches and moving forward with the game. I am also very happy with the effort, class and character our players showed during the game instead reacting otherwise. Knowing the outcome, we would do it all over again. We will live with an asterisk next to this game.”

Saturday’s game showcased the ongoing development in the OFA offensive line and sophomore fullback Andrew Loffler who gained 81 yards on 11 carries, culminating with a 48-yard scoring sprint down the left sidelines in the fourth quarter.

Loffler’s second rushing TD of the game answered a 24-yard scoring run by Wildcats running back Carter Baer (7-87), who broke two tackles behind the line of scrimmage on the play. Baer, who added and interception on defense, also broke loose for a 32-yard run on the Wildcats’ first scoring drive.

OFA senior Derek Barr who has emerged as a leader at linebacker and in the offensive line spoke of the steady development of the OFA linemen as a whole since a season-opening week zero (normal scrimmage week) win over Plattsburgh High.

“Our young linemen have really worked hard on and have gotten a lot better. We had a job to do today and we did it,” Barr said.

“Gouverneur was a tough team and they played hard all of the way.”