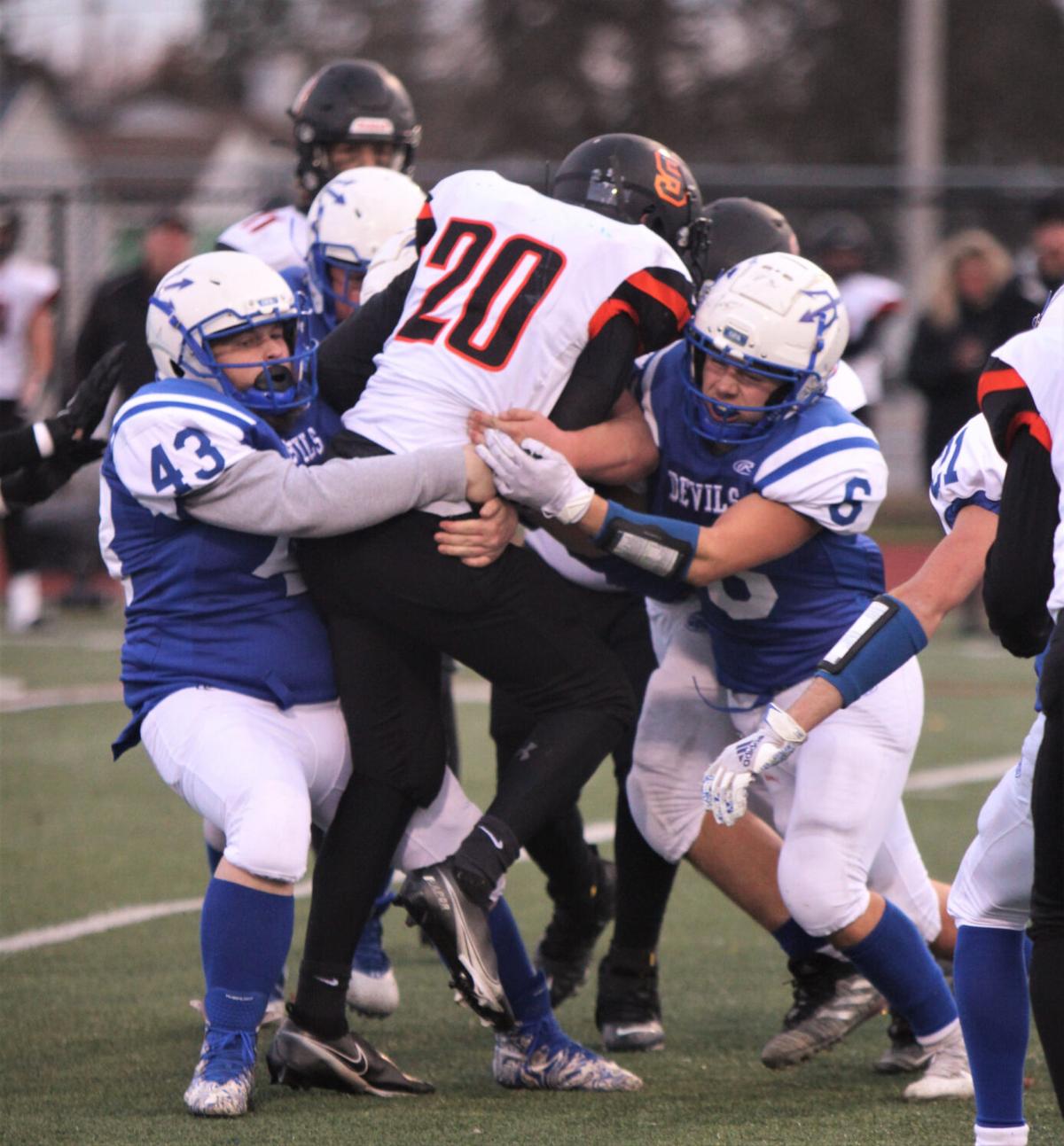 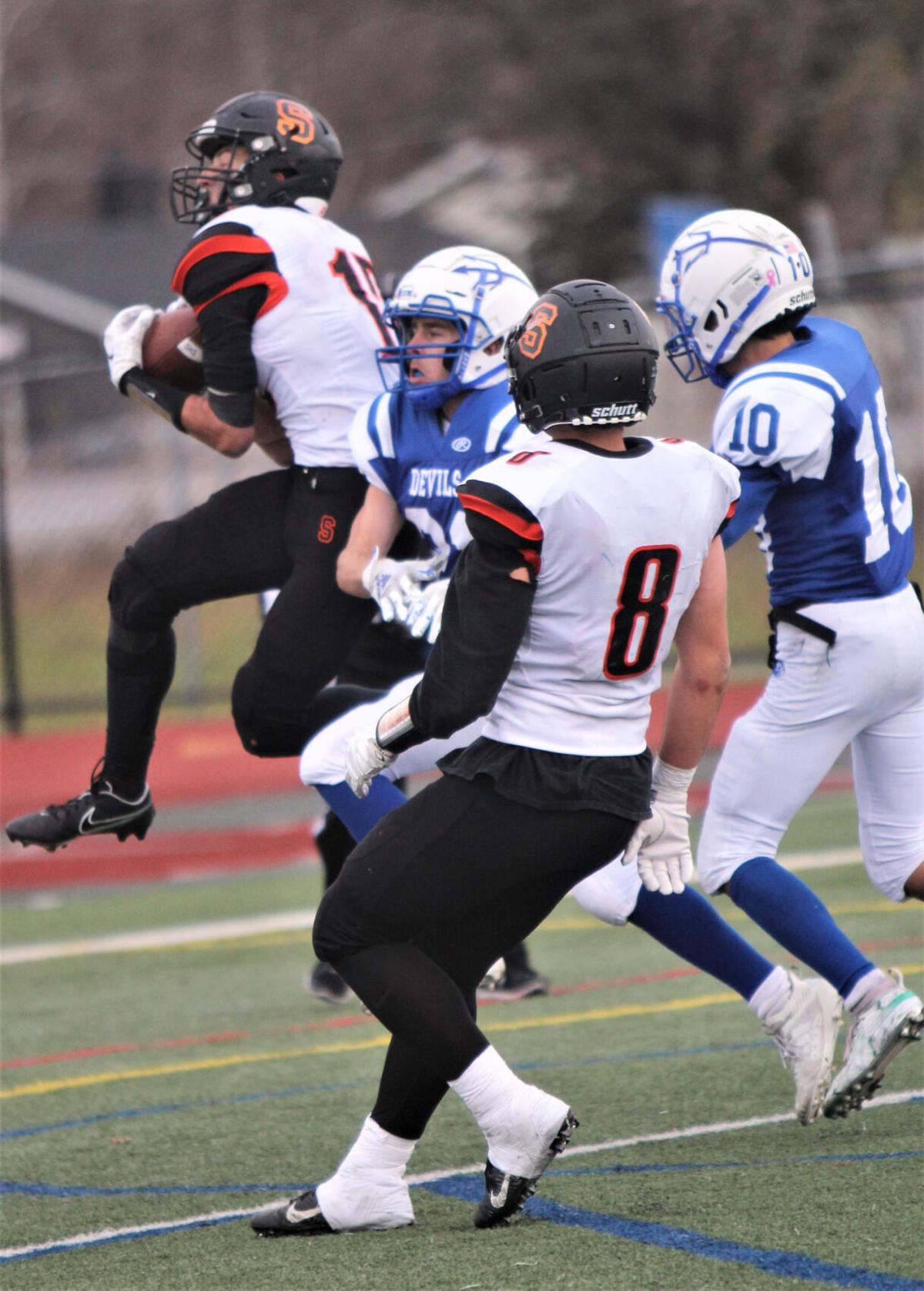 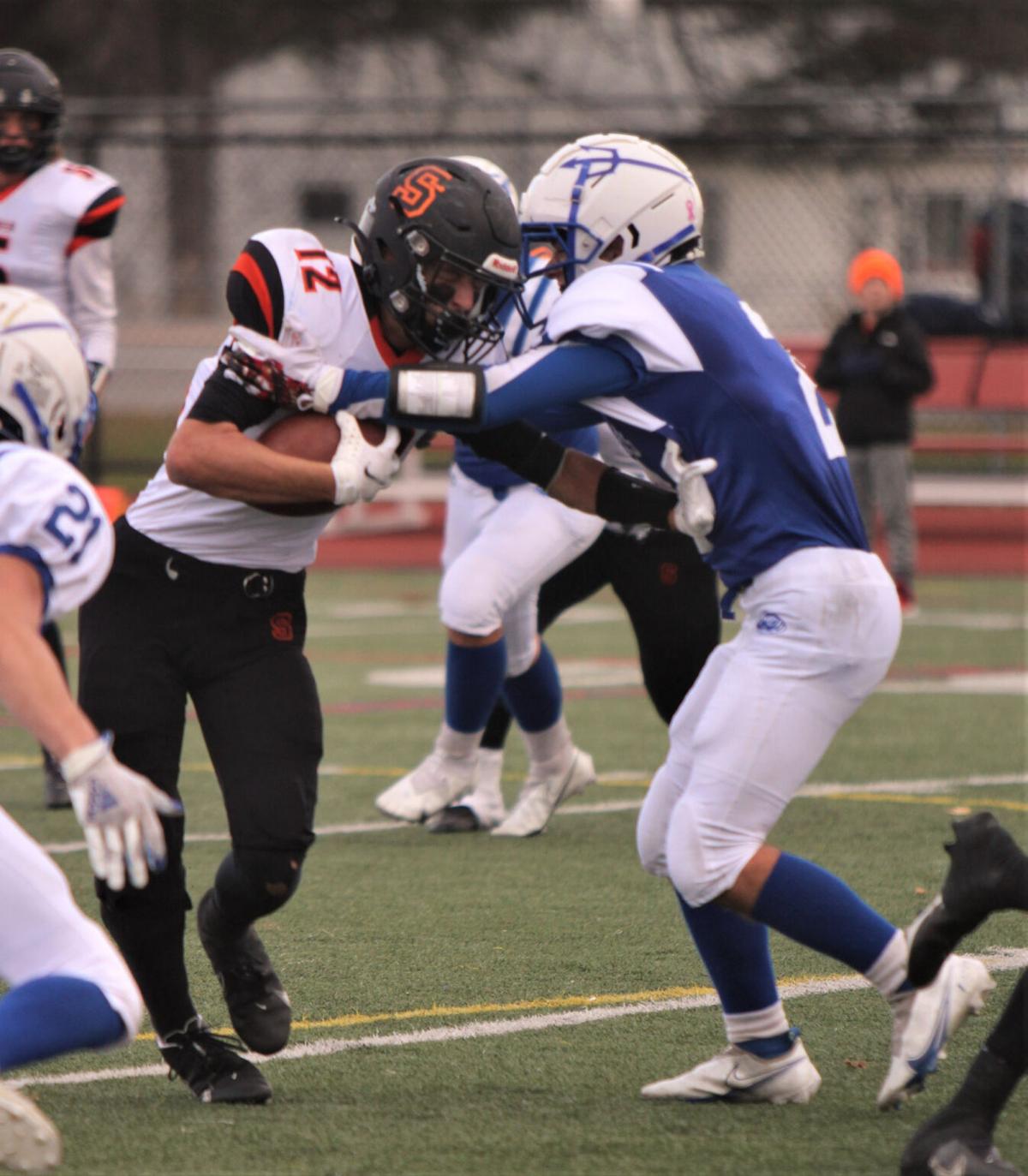 “We had a great season and we accomplished a lot in six months,” he said. “The was a great group of guys and a great group of seniors who contributed a lot to the program. The guys of Ogdensburg and Heuvelton all did great.

“But sometimes you just lose to a better team. And that is what happened today. We lost to a great football team.”

Schuylerville was led by the ultra-dynamic senior passing combination of quarterback Owen Sherman and running back Ryan Dow, who is the leading receiver in the Black Horses’ uptempo, no-huddle, flexbone offense.

“We just had an awesome day as a team,” said Dow after the Horses advanced to the state semifinals at Middletown next weekend. “Owen threw me great passes and our offensive line just blocked great. And our play calling was outstanding.”

“And our defensive line played great, too,” he added. “It was just amazing.”

Sherman also threw two-point conversion passes to Zachary Bowen, Lukas Sherman and Landen Cumm, and Lukas Sherman ran for another deuce in the first half. Owen Sherman pitched only one pass in the second half but it was a beauty, lofting a 31-yard pass to a leaping Dow at the goal line at 8 minutes, 30 seconds of the third quarter. Lukas Sherman ran for the conversion and second team running back Nicholas Abruscato closed out the scoring on a two-yard run in the fourth quarter.

“OFA has a scary power football package. We knew they would be bigger and stronger than us so we knew we had to use our quickness to neutralize their strength,” said Schyulerville coach John Bowen after the 12-0 team posted its 19th straight win after a loss in the 2019 Class B state title game at the Carrier Dome.

“We had a great week of practice where we worked very hard at ramping things up,” Bowen said. “Owen Sherman and Ryan Dow had great games today and that was our best game of the season with our vertical passing game. All of our backs ran well and in our next game it might be somebody else who has the big game.”

Lukas Sherman and Cumm rushed for 55 and 53 yards, respectively, and backup running back Martin Flanders gained 53 and a team-high 14 carries in the second half.

OFA running back Drew Costello (4-81) caught a pair of 40-yard passes from quarterback Tristan Lovely in the first half and the Devils (9-2) fashioned a red zone threat late in the first quarter. The threat ended when defensive back Ollie Bolduc broke up a fourth down pass in the front corner of the end zone.

The Devils also reached the Schuylerville 11 in the fourth quarter but were stopped on downs by a fourth down sack.

“We have nothing to be down about. We had a great season,” Tessmer said. “We had guys who did the work in the spring and summer and during the season. “We won our sectional title and we won the Section 10-7 Championship. We are super proud of all of the guys and this is something that we can build on.”

Justice McIntyre caught two passes for 22 yards for OFA, which was limited to 54 rushing yards.

“Defensively we really played well,” Bowden said. “OFA’s quarterback is a running back and we knew we had to contain him. And we did.”

Collin Stafford of South Lewis finished 22nd in the boys race with a mark of 16:35.6 while Canton’s Max Finley took 59th.

In another cross country race, South Jefferson’s Alexa Doe was the top girls finisher with a 17:52.8 at the 12th Rock Northeast Championships in Montgomery. Carthage’s McKinley Fielding was third in the high school girls race.

The relay registered a time of 2:03.37, as the race was won by Section 11’s Northport-Commack.