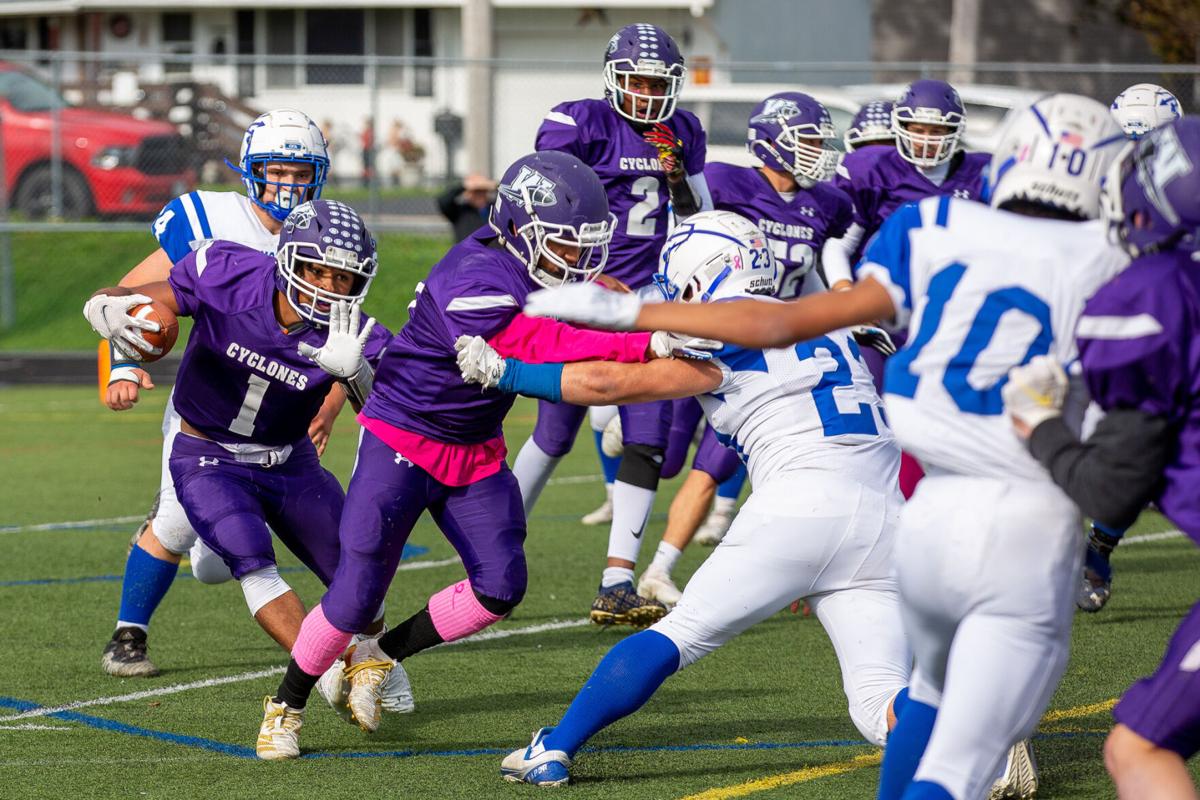 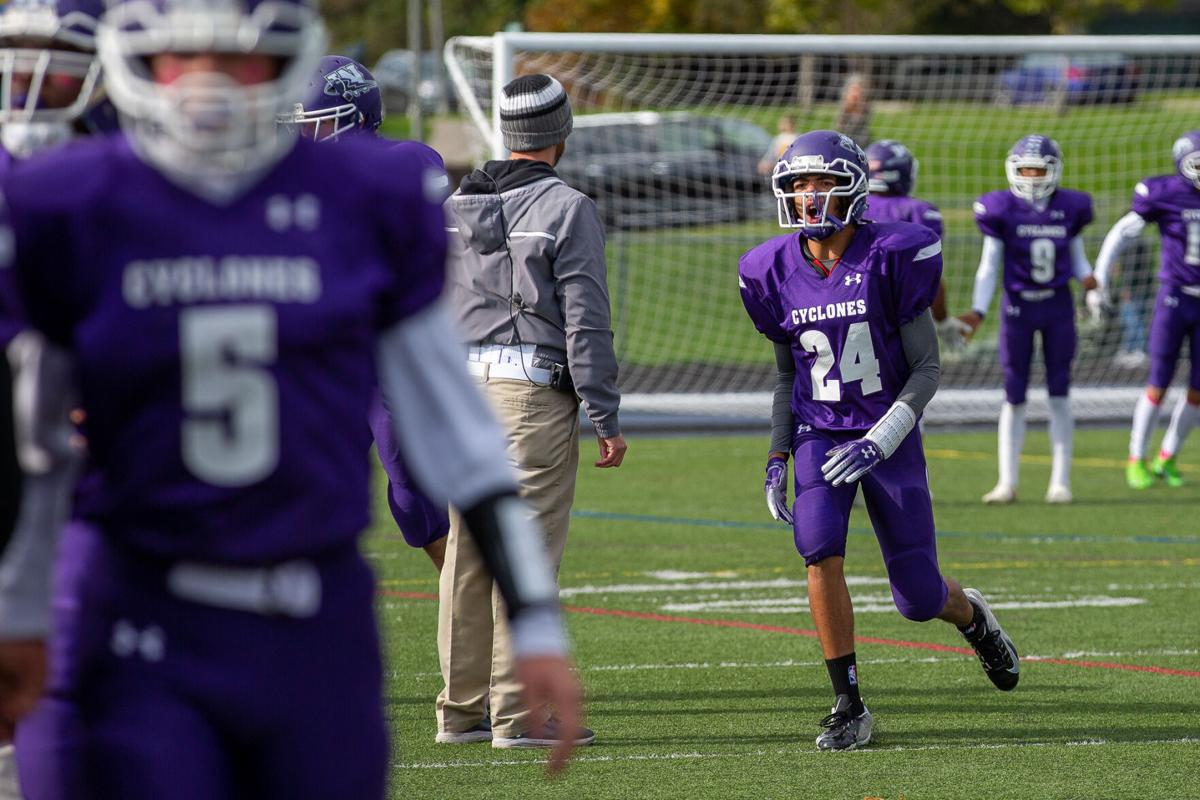 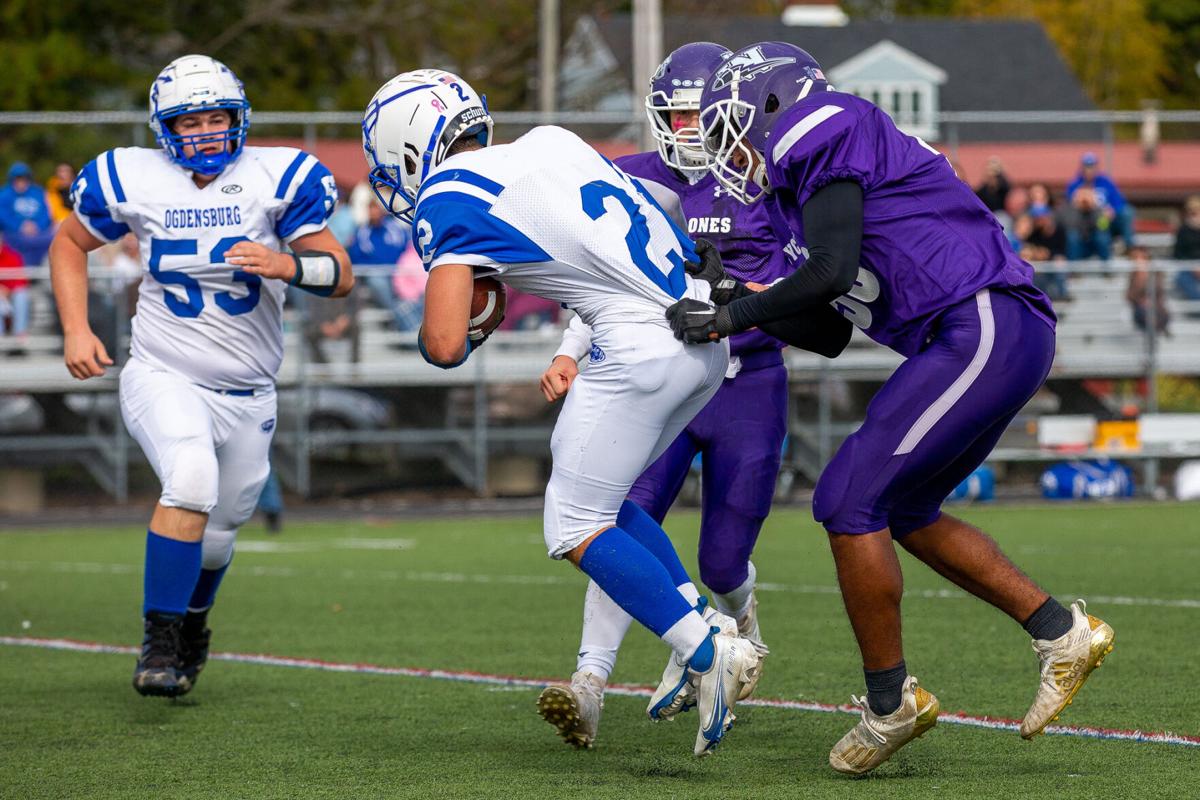 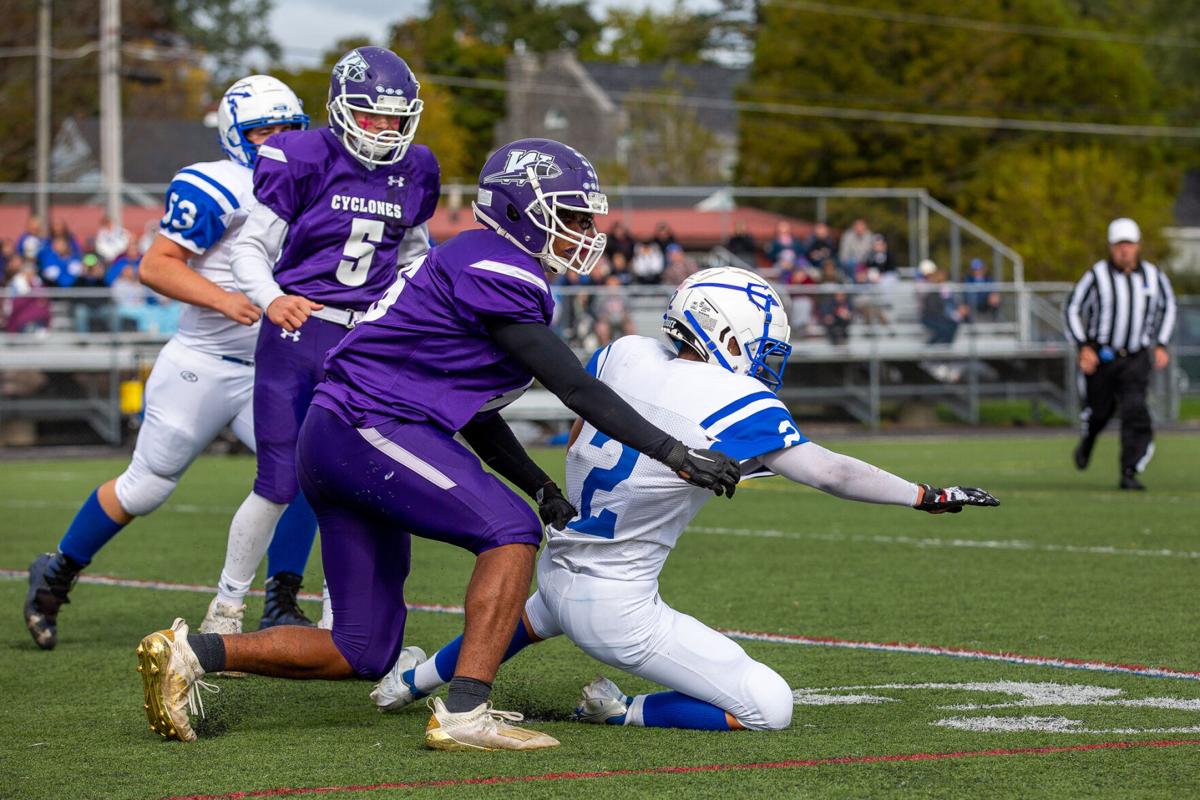 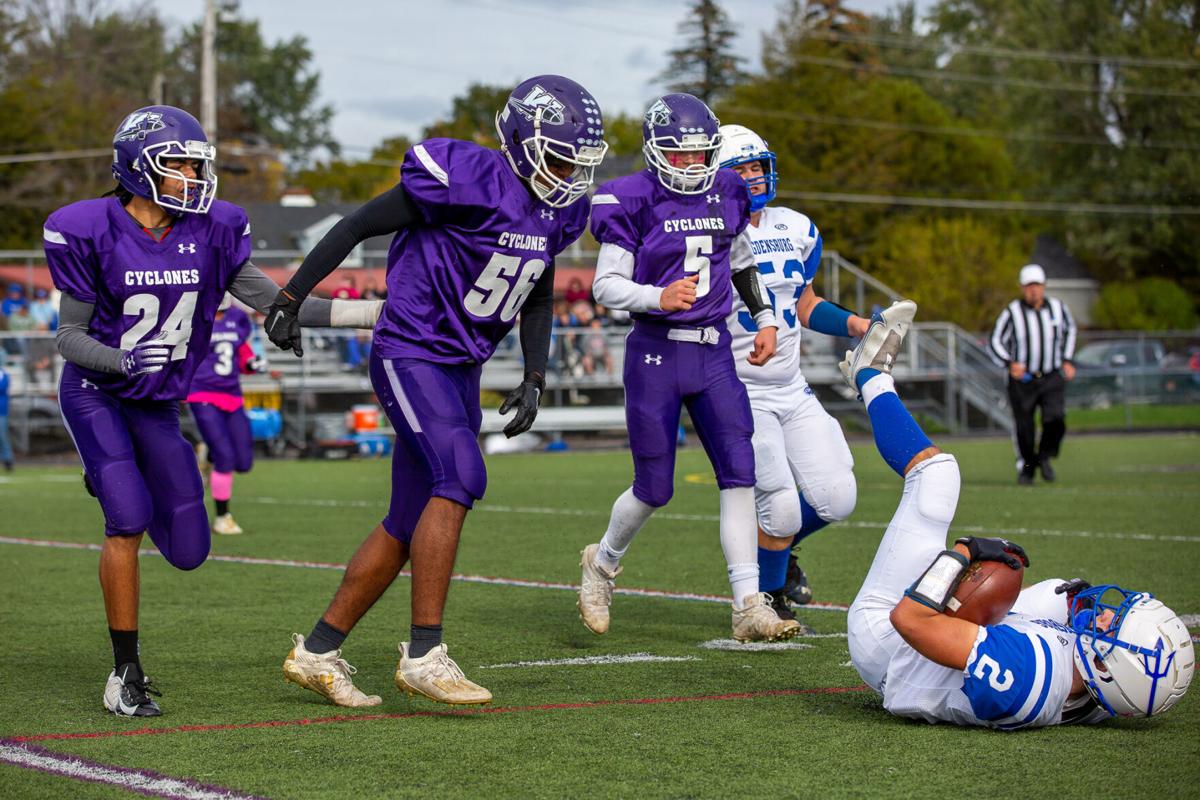 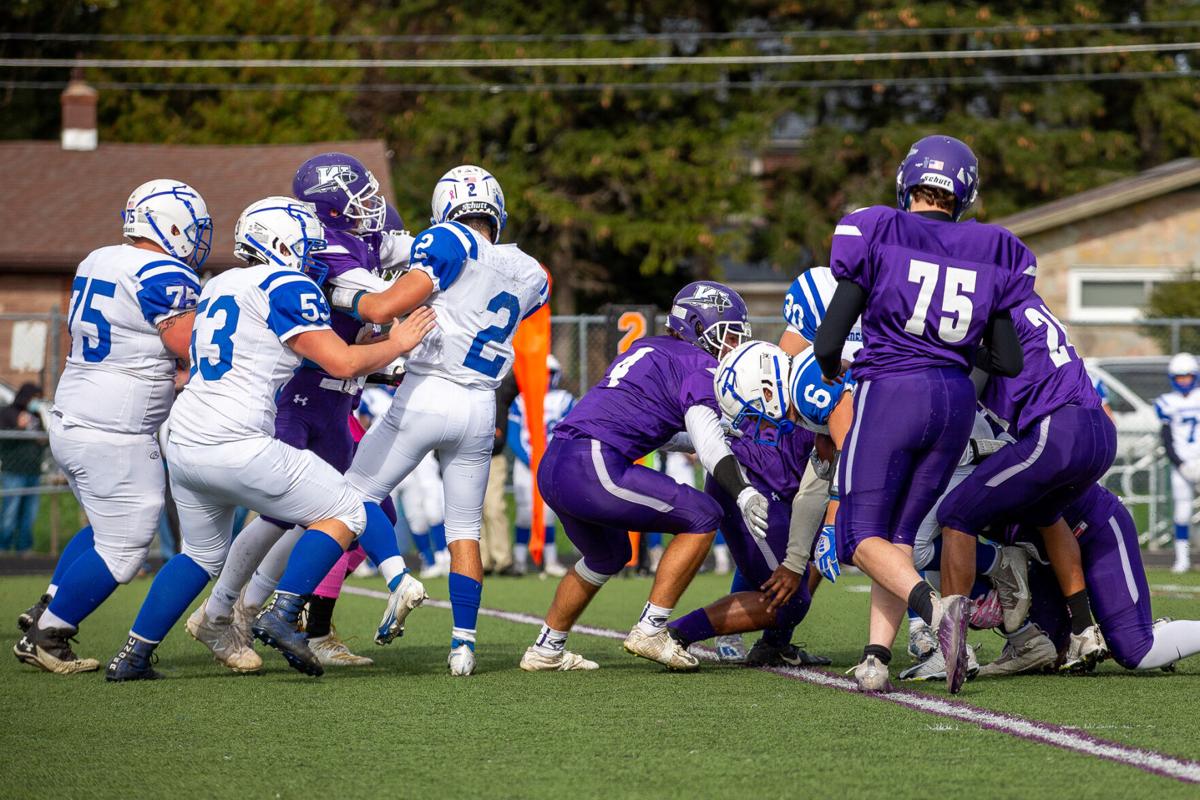 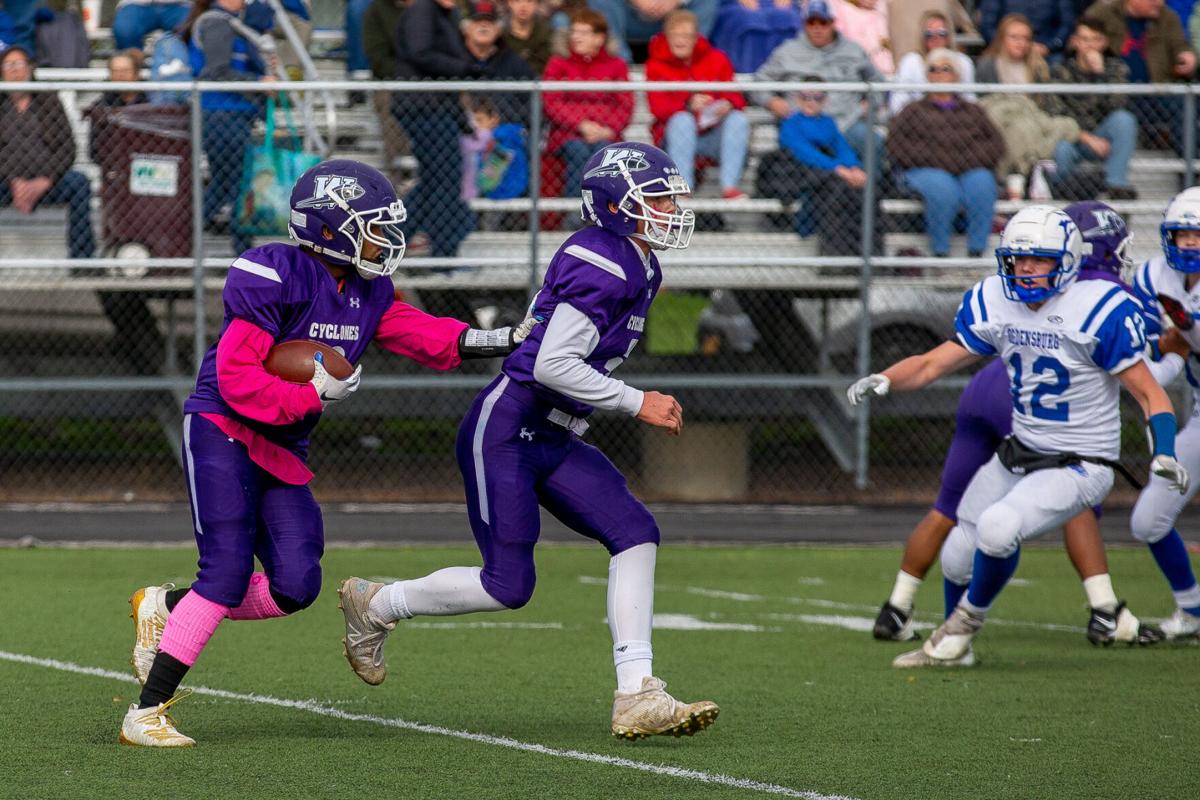 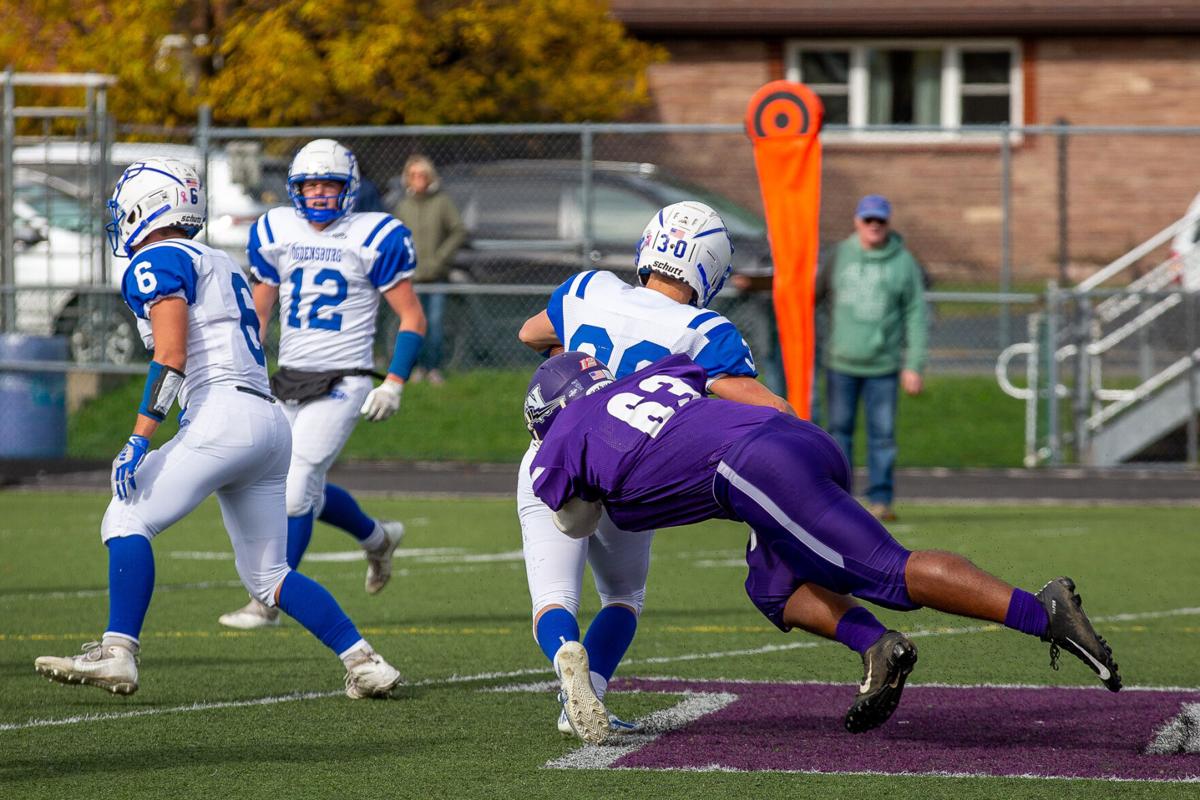 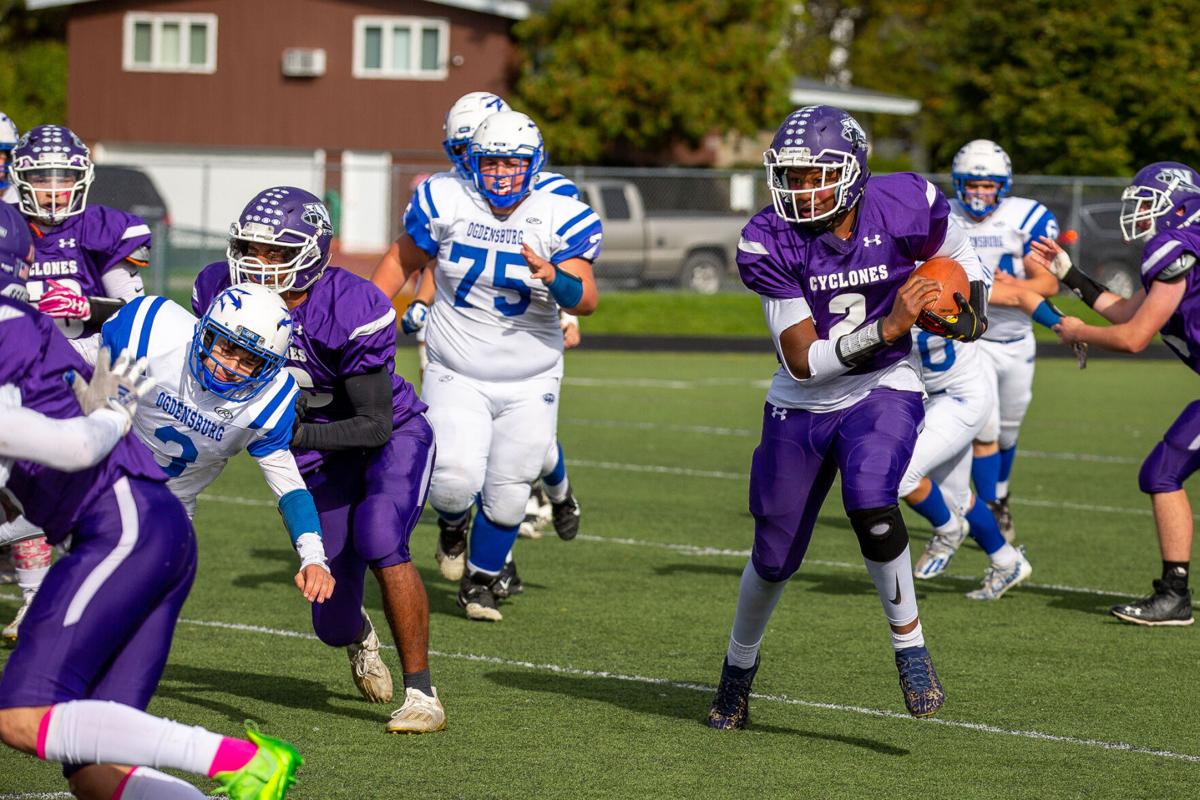 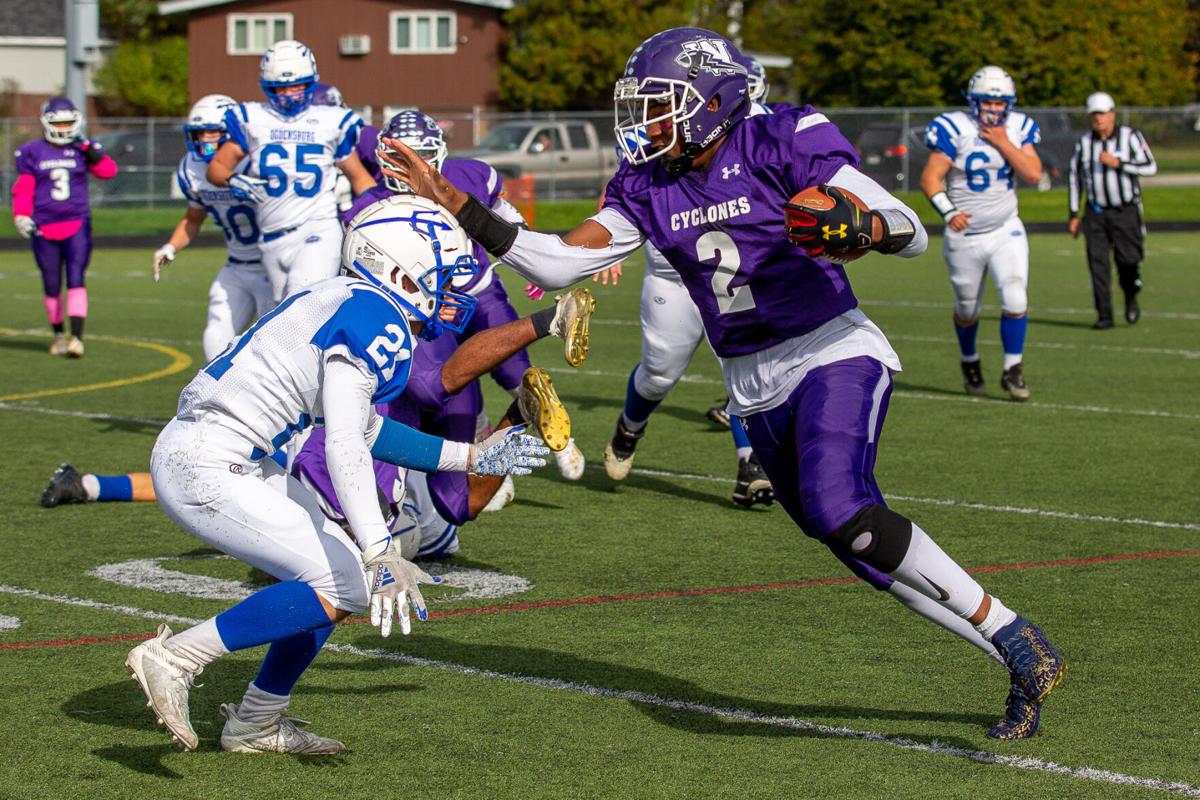 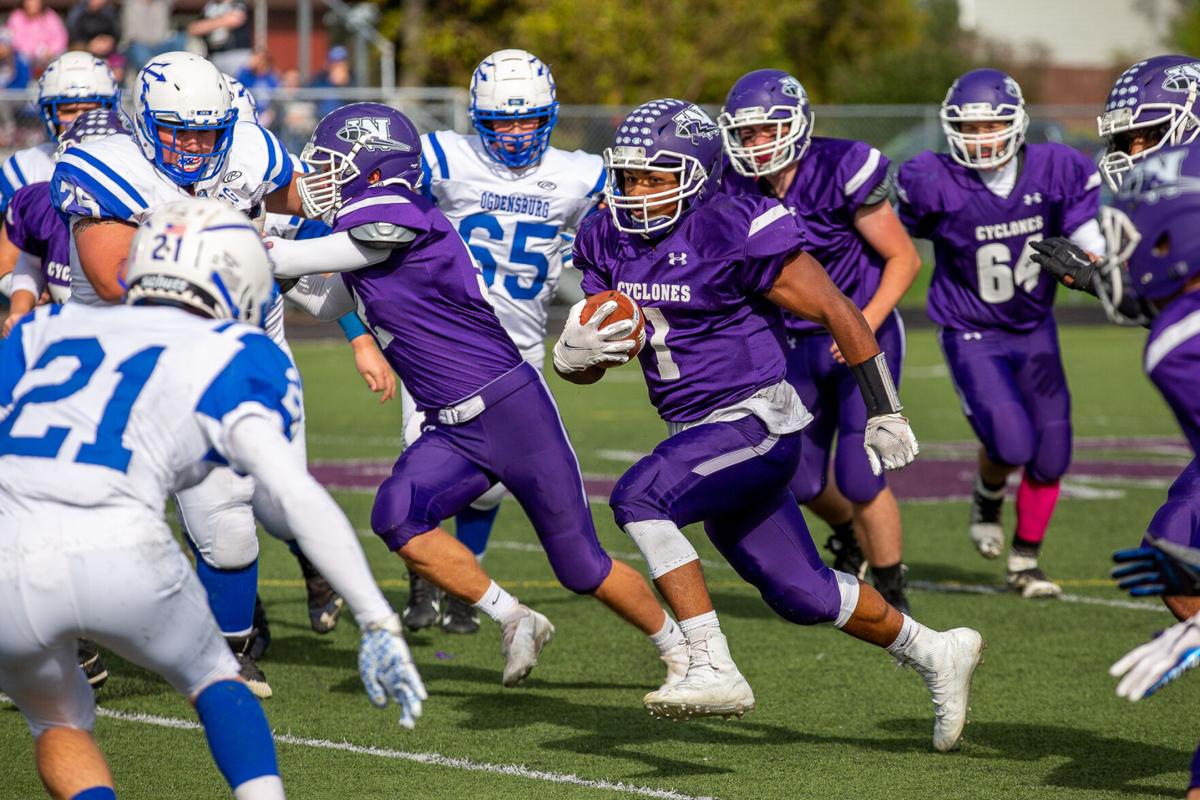 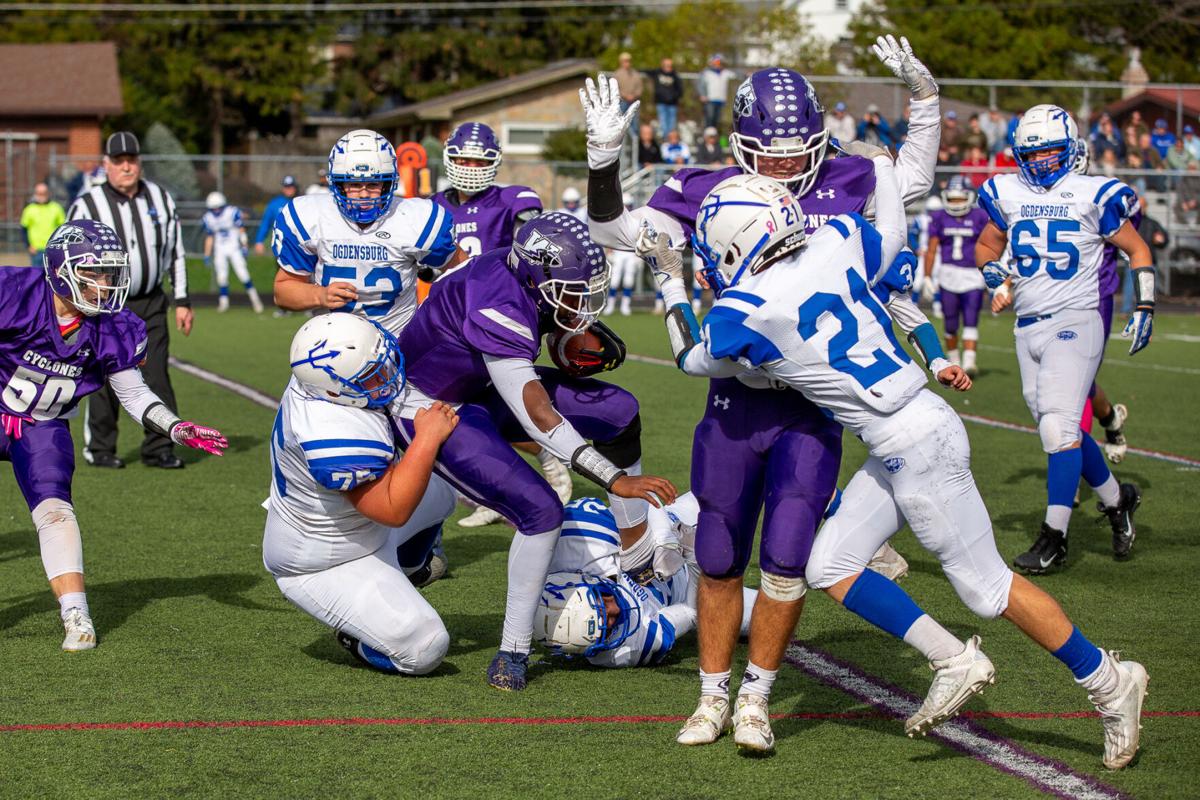 WATERTOWN — Ogdensburg Free Academy doesn’t disguise what it wants to achieve on the playing field and that is simply to play power football.

Such was the case once again as the Blue Devils executed a punishing ground game along with some timely passing in defeating Watertown, 36-24, on Saturday afternoon in the Northern Athletic Conference regular-season finale for both teams.

Senior running back Drew Costello ran for three scores, including two in the decisive first half, and senior quarterback Tristan Lovely threw for a touchdown and ran for another to pace OFA.

“OFA is a good football team and we know what to expect from them,” Watertown coach Kyle LaLonde said. “And that’s just what we got today.”

With the win, the Blue Devils improve to 6-1 on the season, including 5-1 in the conference, as they head into next week’s sectional playoffs.

“The touchdown early wasn’t great, but we were able to recover from that,” Costello said of Watertown’s early TD to open the scoring. “Watertown’s probably one of the best teams we’ve played all year, so a win like this is definitely a statement win.”

Costello rushed for 131 yards on 18 carries, with 92 of those yards coming in the second half to help finish off the win for OFA. Lovely completed seven of 13 passes for 107 yards through the air.

“Our offensive line is getting better and better as we go,” Lovely said. “And Drew, Adam and Andrew just running the ball, makes my job a whole lot easier just making the whole offense run very smoothly. With good play calling, these boys are hitting holes running hard, it’s hard to stop.”

OFA turned in a dominant performance by scoring on its last three possessions of the first half after Watertown (4-2) scored on its first drive of the day.

“Watertown had a good drive at the beginning there,” OFA coach Matt Tessmer said. “Watertown is a talented team and we were fortunate to be able to respond to that first drive the way we did.”

The Cyclones drove 62 yards in seven plays, capped by a six-yard touchdown run by Deante Hall and led 8-0 after quarterback Joel Davis ran in the conversion attempt.

The Blue Devils then drove into Watertown territory, but Lovely’s pass was intercepted by Davis near the goal line to stem the drive.

After a three-and-out and a short Watertown punt, OFA covered 56 yards in just four plays, finished off by a 24-yard touchdown pass from Lovely to Connor Graveline. Justice McIntyre hauled in the conversion pass from Lovely to tie the score at 8-8 with 1:10 left in the first quarter.

The Cyclones then fumbled the ball away on the ensuing kickoff and seven plays later, Costello fought his way into the end zone. After Adam Calton ran in the conversion, the Blue Devils led 16-8 with 9:38 remaining in the half.

“It was good for us to do that and then our defense kind of settled in and made it more difficult,” Tessmer said. “Watertown is still a good and very difficult team to stop, but at least it wasn’t as easy for them, so we were able to settle a little bit and play a little better.”

Watertown then drove into OFA territory, but turned the ball over on downs on the 26-yard line. Then 10 plays later, Costello burst his way through on a five-yard touchdown run and led 22-8 with 16 seconds left until halftime.

“I thought overall we played pretty well, we just had a couple turnovers that really hurt us,” LaLonde said. And when you play against good teams like OFA, you can’t turn the ball over and you’ve got to take advantage of opportunities that are given to you.”

The Blue Devils then engineered another lengthy drive, this time in eight plays, to start the second half, which consumed five minutes and 16 seconds, capped by Lovely’s one-yard scoring run. The Blue Devils led 30-8 after Drew Piercey’s conversion pass from Lovely.

“Our offense did a great job,” Tessmer said. “We were mixing it up a little bit with some throws, but we ran the ball well. The guys did a good job blocking.”

The Blue Devils then recovered an onside kick to keep the Cyclones from possessing the ball.

“A lot of good preparation during the week, we’re all on the same page trying to stop these guys on defense,” Lovely said. “We knew they had good athletes, we were just trying to contain them and get the win.”

After Davis scored on a one-yard touchdown plunge five seconds into the fourth quarter, Watertown got within 30-16 on Hall’s conversion run.

But OFA responded with a yet another long drive, which was completed by Lovely’s four-yard scoring run to build a 36-16 advantage with 6:28 left in the game.

“Drew is a hard runner, he’s difficult to tackle, he’s usually going forward,” Tessmer said. “Tristan is also very athletic and can make plays of his own with his legs and he did that. Also, the linemen did a good job of just getting it ready for those guys to get in there, they did a great job.”

Davis added another one-yard touchdown on a keeper with 3:11 left and drew within 36-22 on Hall’s conversion run.

Hall paced Watertown on the day by totaling 147 yards on the ground on 19 carries and Davis finished with 74 yards rushing on 15 carries. Davis also completed three of four passes for 43 yards, all coming in the second half.

OFA will open the Section 10 playoffs when it hosts St. Lawrence Central in a Class C semifinal at 7 p.m. next Friday.

“We’re doing pretty good, we still need to get better on a lot of things,” Lovely said. “The best time to get better is now, come playoff time.”

Meanwhile Watertown will get two weeks to prepare for the section’s Class A championship game when it will host Canton at 7 p.m. on Nov. 5.

Two years ago, the Cyclones completed their return to Section 10 by defeating Canton in the Class A final.

“I think we’re looking good, we’ve got two weeks to prepare for Canton and that’s going to be a good game,” LaLonde said. “I think we’re going to work on a lot of fundamentals and skills next week and really focus on honing in and getting ready for Canton.”