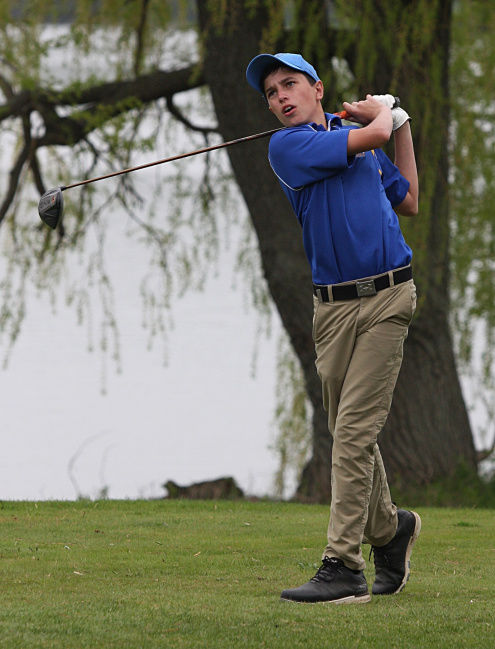 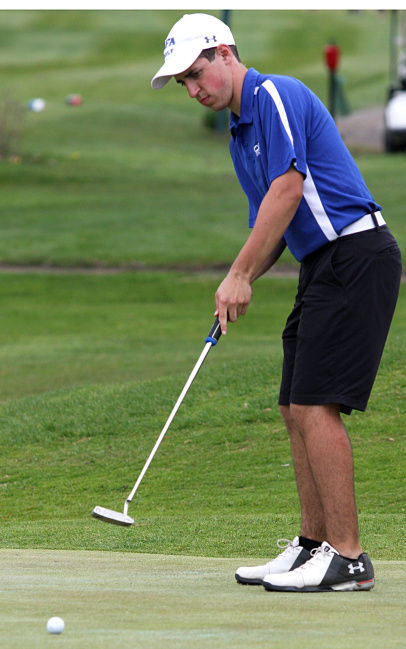 DAVE SHEA/OGDENSBURG JOURNALOFA’s Jake VanHouse putts on the final hole of Thursday’s Section 10 Golf Championships where he shot a 75 to share the first round individual lead and lead the Blue Devils to the Division I and Overall Team Championship. 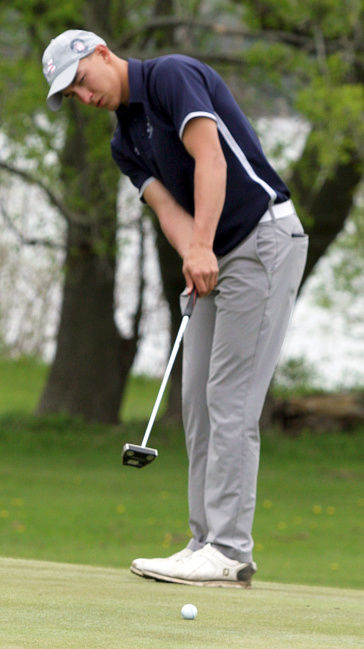 DAVE SHEA/OGDENSBURG JOURNALOFA’s Jake VanHouse putts on the final hole of Thursday’s Section 10 Golf Championships where he shot a 75 to share the first round individual lead and lead the Blue Devils to the Division I and Overall Team Championship.

MASSENA — If Ogdensburg Free Academy’s Jake VanHouse and Massena’s Terrell Thomas could have mixed their rounds on Thursday at the Massena Country Club, the two seniors would have produced one of the best first days in the history of the Section 10 Golf Championships.

VanHouse birdied the second, fourth, sixth and eighth holes, posting a one-under-par 35 on the front nine but came in with a 40 on the back nine for a four-over-par 75 on the 6,337-yard layout softened by heavy spring rains. Thomas reversed the numbers, shooting a 40-35 with birdies on the 10th and 14th holes to surge to a share of the lead heading into today’s medalist and state qualifying rounds.

VanHouse’s total was doubly satisfying as he led the Blue Devils to a team total of 420 and an 18-stroke lead over Madrid-Waddington in the race for the Section 10 Division I and Overall championships. Massena placed third at 467 and Division II champion Canton placed fourth overall at 474. The Blue Devils and Golden Bears both went undefeated during the regular season.

“This championship means a lot to us,” said VanHouse, who plans to play collegiately at Elmira College starting in the fall. “We have been working toward this ever since last year when we went undefeated in the regular season but struggled in the sectionals where Massena won the title.

“Our fourth, fifth and sixth guys stepped up all season and they did it again today.”

Clifton-Fine’s Adam Szlamczynski stood third and very much in the picture for the individual championships at 78, and Madrid-Waddington’s Cade VanBuren put together a career day, finishing as a solid contender at 79.

Following VanHouse in the OFA lineup were Jack Mills at 84, Kelson Hooper at 86, Jayden Kench at 87 and Drew Mills at 88. Timmy McLellan shot an 89 which did not figure in the team scoring, where only the top five scores count, but played well enough to advance to today’s state qualifying rounds.

“Our guys won today because of their dedication, hard work and love of golf. The put in a lot of time on the golf course,” said OFA coach Joe Lynch. “They played early in the morning and they played in the dark. That is why they did so well this season in the tough conditions. Depth was the difference. Just about everyone in our league were strong in the first two or three positions but we were strong all of the way through. Our third, fourth, fifth and sixth guys gave us a big advantage.”

Clifton-Fine’s Adam Szlamczynski stood third and very much in the picture for the individual championships at 78, and Madrid-Waddington’s Cade VanBuren put together a career day, finishing as a solid contender at 79.

“I feel really good about tomorrow,” VanHouse said. “I had a great front nine but missed some short putts on the back side. I am just going to play my game and look to make more putts.”

Thomas believes his hopes for a repeat title rests with picking up where he left off.

“Something clicked on the back nine. I am excited for tomorrow and looking forward to playing with Jake,” Thomas said. “It should be a lot of fun.”

Szlamczynski believes that he left a lot of extra shots on the course.

“It is going to be all about putting, I had 39 putts today. I can do much better than that,” he said.

Following the top four under the cut line were: Dylan Farr of Gouverneur at 81, Jake Amo of Massena at 82, Ryan Jones of Canton at 82, Lucas Ryan of Madrid-Waddington with an 86, Jacob Dutch of Norwood-Norfolk at 86, Kelson Hooper of OFA at 86, John McCall of Madrid-Waddington at 87, Jace Dutch of N-N at 90, Nick Burns of M-W at 90, Cayden Cady of Canton at 91, Nick Skiff of Tupper Lake at 92, Kaden Conners of Salmon River at 94, Nick Linstad of Massena at 93, Jalen Cook of Salmon River at 95 and Sam Sieminski at 95.

Advancing four golfers to today’s medalist and state qualifying round was a very strong effort for M-W according to Coach Aaron Jones.

“We came in looking to make a run at the title and we were able to do that. We had a good day. Cade VanBuren put together a great round,” he said.