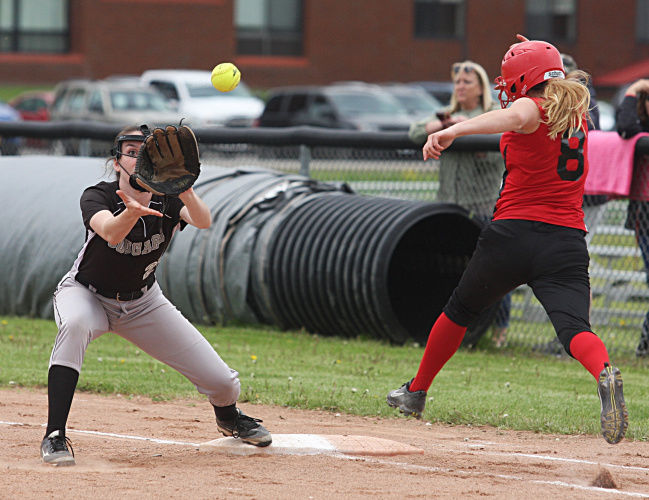 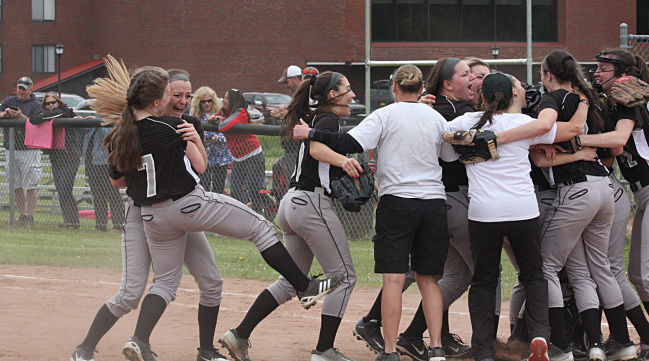 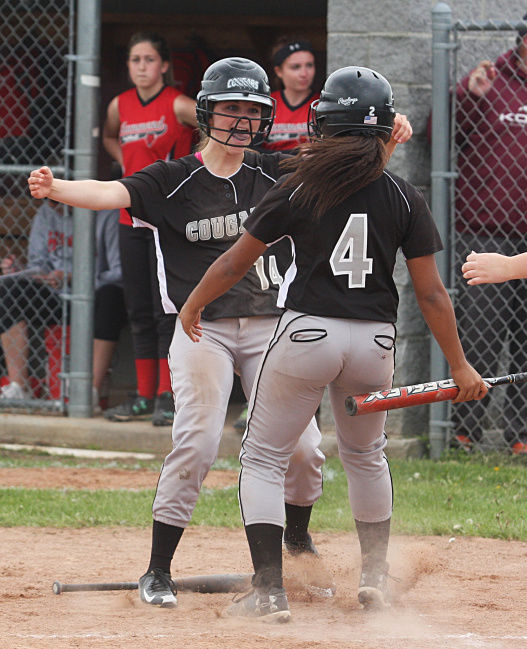 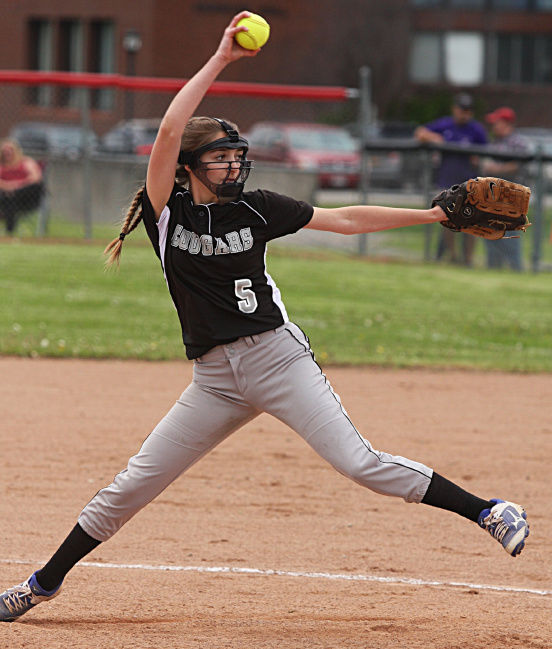 DAVE SHEA/SUNDAY ADVANCEEdwards-Knox’s Dekoda Matthews delivers a pitch during her victory over Hammond in the Section 10 Class D Championship on Saturday. 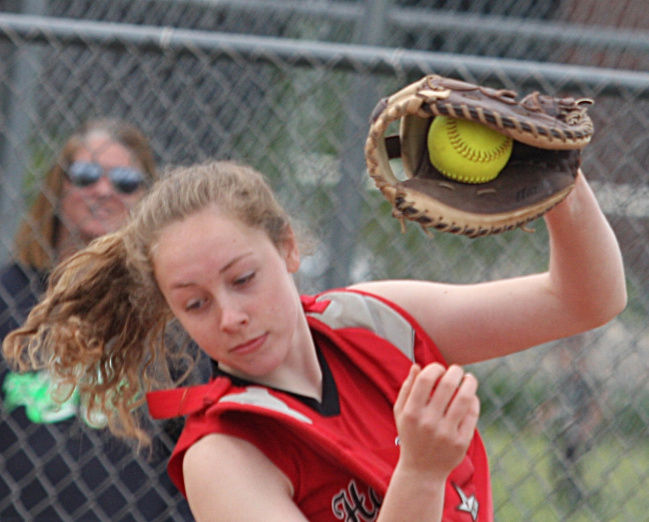 DAVE SHEA/SUNDAY ADVANCEHammond’s Kelsey Bennett comes up with a catch behind the plate during Saturday’s Section 10 championship against Edwards-Knox. 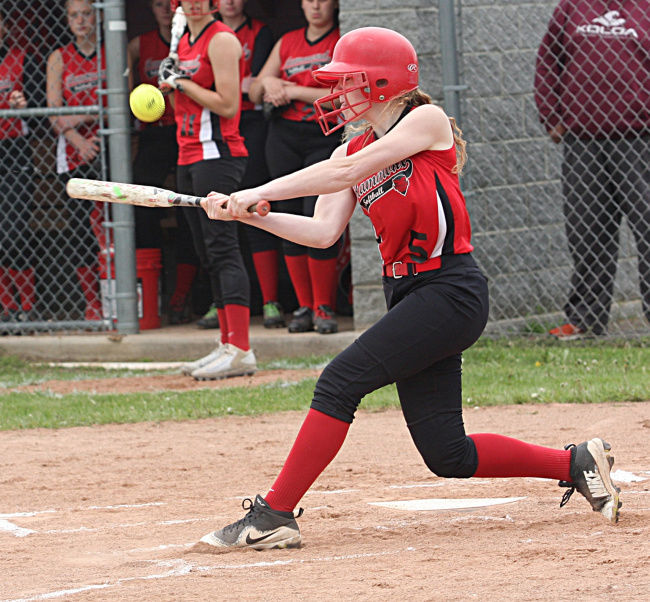 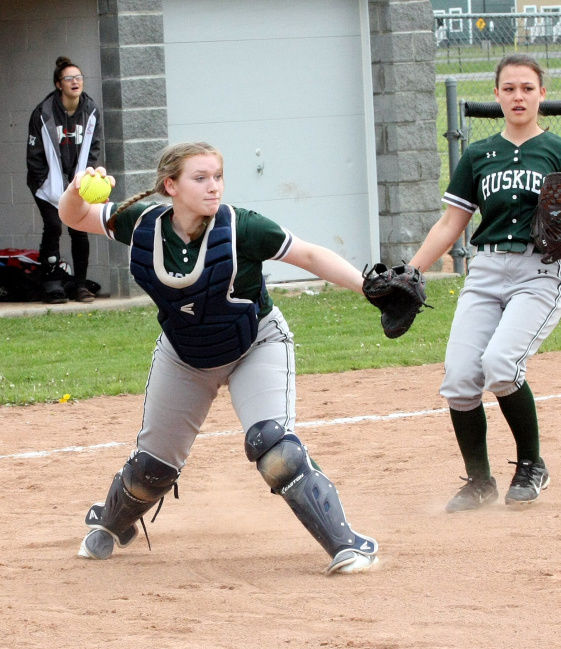 JOHN GOKEY/MALONE TELEGRAMMalone catcher Courtney Dumas fields a bunted ball and throws to first base during the Section 10 Class A championship against Massena. 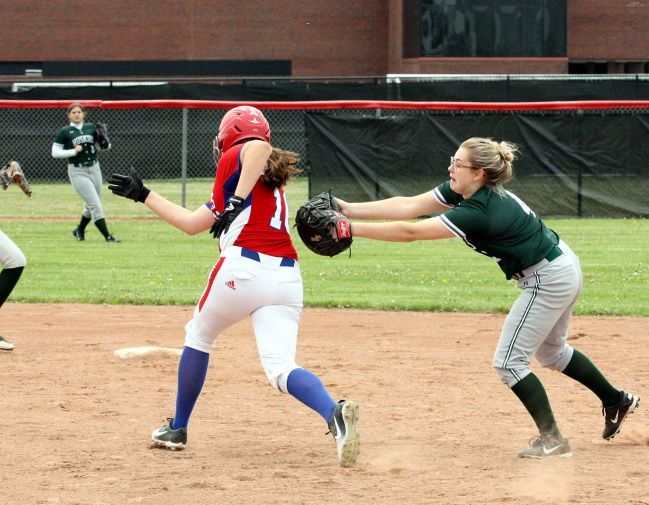 JOHN GOKEY/MALONE TELEGRAMMalone second baseman Kacey Mulverhill barely misses tagging out Massena’s Kristen Oliver, but tossed to first base for an out during the Section 10 Class A championship game. 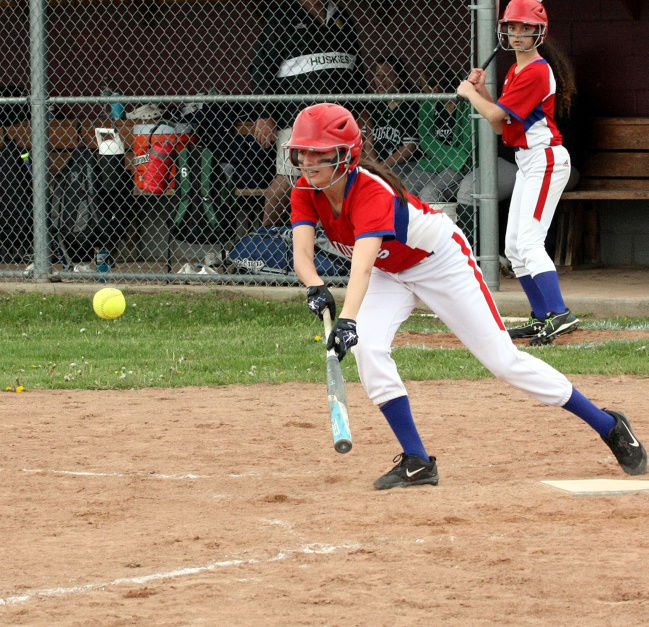 JOHN GOKEY/MALONE TELEGRAMMassena freshman Libby Rogers drops down her second straight bunt for a base hit during the Section 10 Class A championship game against Malone on Saturday. 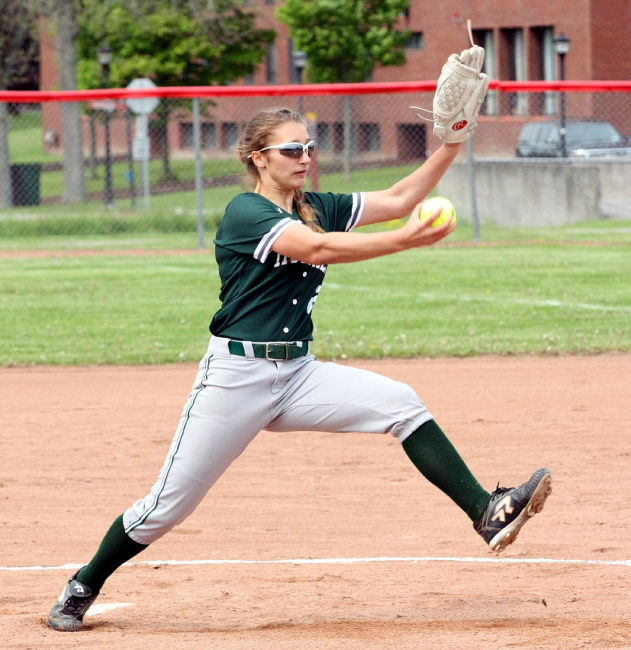 DAVE SHEA/SUNDAY ADVANCEEdwards-Knox’s Dekoda Matthews delivers a pitch during her victory over Hammond in the Section 10 Class D Championship on Saturday.

DAVE SHEA/SUNDAY ADVANCEHammond’s Kelsey Bennett comes up with a catch behind the plate during Saturday’s Section 10 championship against Edwards-Knox.

JOHN GOKEY/MALONE TELEGRAMMalone catcher Courtney Dumas fields a bunted ball and throws to first base during the Section 10 Class A championship against Massena.

JOHN GOKEY/MALONE TELEGRAMMalone second baseman Kacey Mulverhill barely misses tagging out Massena’s Kristen Oliver, but tossed to first base for an out during the Section 10 Class A championship game.

JOHN GOKEY/MALONE TELEGRAMMassena freshman Libby Rogers drops down her second straight bunt for a base hit during the Section 10 Class A championship game against Malone on Saturday.

The Cougars seniors completed an emotional triple crown with a 6-2 victory over the Red Devils, secured with a four-run seventh inning.

“It meant the world to all of us to get a softball championship for the seniors and for (Coach Lori Brewer),” said Hart after the fourth-seeded Cougars (12-5) earned the school’s first Section 10 Class D softball title since 2008. “We had already won soccer and softball titles in the last two years and we really wanted the softball title. We have been playing together for a long time.”

Hart singled and raced around the bases when the ball eluded a Hammond outfielder in the sixth inning to give Edwards-Knox a 2-0 lead. She later drilled a bases-loaded single to trigger the four-run top of the seventh. She also made a diving play at shortstop to snuff a Hammond threat in the second inning and made superb running catch in shallow left field for the first out of the seventh inning.

“Abby Hart is just a tremendous athlete and a great hitter. In batting practice she hits everything hard no matter where it pitched,” Lori Brewer said. “This is such an important championship for me because these girls are like 12 daughters that I could bring home with me every night. We beat a very good team today in a very good game.”

The game was dictated by pitcher Matthews and Hammond eighth grader hurler Sydney Tanner through four innings. Matthews hurled five scoreless innings, allowing just a bunt single to Alecia Parrow and a single to Hannah Tanner, and finished with a four-hitter, walking just one. Tanner held Edwards-Knox hitless and allowed just one base runner on a walk through four innings before Katelyn White doubled in the fifth and scored on an infield error.

The Cougars upped their lead to 2-0 in the sixth when Hart singled and scored on the three-base error. Hammond answered quickly fashion in the bottom of the fifth as Hailey Cunningham, who made a sensational diving catch in right field in the fifth inning, beat out a bunt single and Kelsey Bennett followed by crushing a home run to the fence in center field.

Edwards-Knox then recorded its decisive four-run burst in the seventh where the bottom of the lineup started the rally. Morgan White drew a walk and after one out Rachel Vachez singled and Kyanne Jeanette beat out a bunt single. Hart followed her two-run single up the middle, Koryn Rowe lined an RBI single down the left field line and Lucy Frary plated the final run of the game with a single.

Matthews closed the game by retiring Hammond in order in the seventh and the Cougars advanced to state play against the Section 3 champion at 7 p.m. Friday at Carrier Park in Syracuse.

“Dekoda Matthews is such a good pitcher because she is always poised. Nothing bothers her at all,” Brewer said. “She throws all year long and works with one of the softball coaches at SUNY Canton.”

Hammond coach Katina Dillon credited the rapid development of her 12-5 team, which will return eight starters for next season.

“We started the season rebuilding but the girls really came on and had a great year. I am very happy with them,” she said. “Today we had a few errors but we played well and we were right there at the end. E-K is a very good team and got the big hits they needed.”

For the eighth time in the past nine seasons, the Malone softball defeated Massena to claim the Section 10 Class A championship title.

At the SUNY Potsdam field, the Huskies won their third straight Class A crown with a victory against the rival Raiders. The win keeps Malone alive and advances the team to the opening round of the state playoffs at 5 p.m. on Thursday at Ike Noble Sports Complex at Canton High School against a Section 3 opponent that is yet to be determined.

The top-seeded Huskies (7-8) jumped out an early lead, scoring three times in the home half of the first inning. Massena broke the shutout bid of winning pitcher Ryleigh McCauley with two runs in the fourth. Malone countered with another three runs in the bottom of the fourth and carried a 6-2 lead into the fifth.

Massena (5-10) trimmed its deficit and pulled to within 6-4, but again, the Huskies had an answer and pushed four runs across for a 10-4 advantage.

“We knew that we could beat them,” said Huskies coach Greg Marshall, who is in his final year at the helm. “We beat them (10-7) at their place early in the season, but we played horrible against them in Malone (a 20-5 loss in 5 innings).

“It was nice to see our girls rebound from that game, and we have been playing well ever since that loss and finished the season strong.”

The Huskies got on the board in the first, scoring three times with two outs. Madison Klepfer launched a shot into the right-center field gap for a triple, then came in to score on an RBI single by Brynn Nelson, who moved to second when Courtney Dumas worked losing pitcher Ieronhenehtha Lazore for a walk.

Nelson scored on a Kaytie Lamica single to left, then both Dumas and Lamica moved up a base on a double steal. Dumas scored the final run of the inning on a Massena fielding error.

Malone carried its three-run lead into the fourth, when the Red Raiders cut their deficit to one run. Grayce Trimboli reached on the first of two Malone miscues in the inning and moved over to second as Kaylee Smoke dropped down a sacrifice bunt. Trimboli score on Malone’s second error and Lazore crossed the plate on an RBI from Kristen Oliver.

The Huskies countered with three runs in the bottom of the fourth, sending nine hitters to the plate. Morgan Kissane reached first on a strike that eluded the Massena catcher. McCauley followed with a walk and Alanna Dumas singled to load the bases. Klepfer forced Kissane home with a bases-loaded walk, then Nelson followed with her second of three base hits on the day, driving home both McCauley and Dumas.

Massena struck in the fifth with its final two runs of the season, as Libby Rogers led off the frame with her second straight bunt single, stole second and scored on Jalyn Cooks’ RBI single into the left-center gap. Cook stole second, then third and scored the Red Raiders final run on a Huskies error.

The Malone squad tacked on four insurance runs in the fifth, chasing Lazore in favor of starting third baseman Caitlyn Reed. Lindsay Otis began the inning for the Huskies with a sharp single up the middle. She moved over to second when Kissane singled to left, then both runners moved up a base on a wild pitch. One-out later, Dumas drove in both base runners with a single to left and took second on the relay to the plate. Klepfer followed with an RBI double over the center fielder’s head and scored the Huskies’ final run on Nelson’s third hit of the game, an RBI single to center.

“We started the year with a young group and had a lot of things to work on,” said Massena coach Susan Macaulay. “We made a lot of progress throughout the season and improved a great deal. This result is not what we wanted, but it was a great learning process for the girls who are coming back next year.”

Paisley Cook finished with a goal and an assist for Salmon River (13-4). Jadie Burns and Kendall Jock also scored.