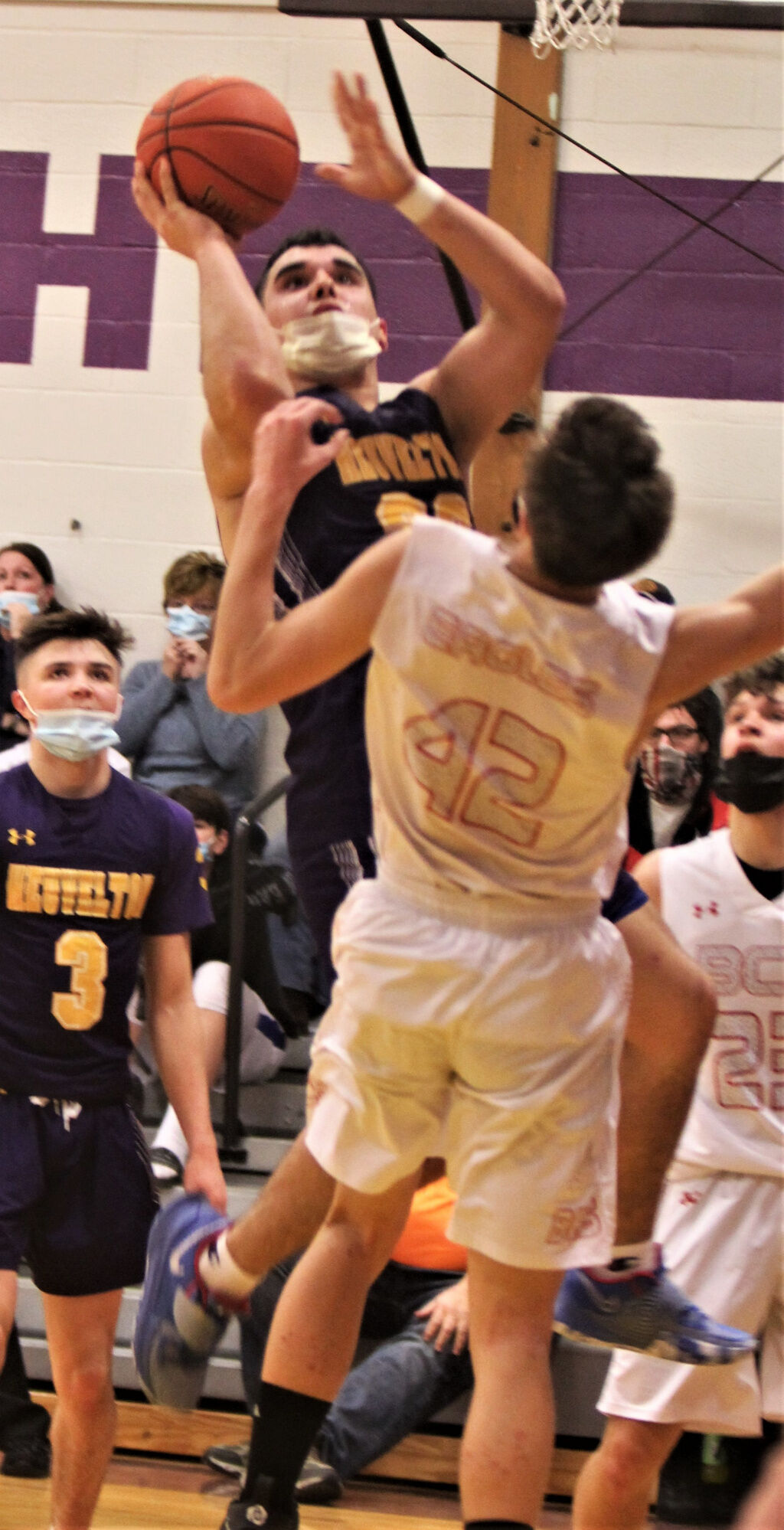 Heuvelton’s Tristan Lovely scores inside on a drive against Beekmantown on Thursday in the title game of the Al Gutterson Tournament. Dave Shea/The Journal 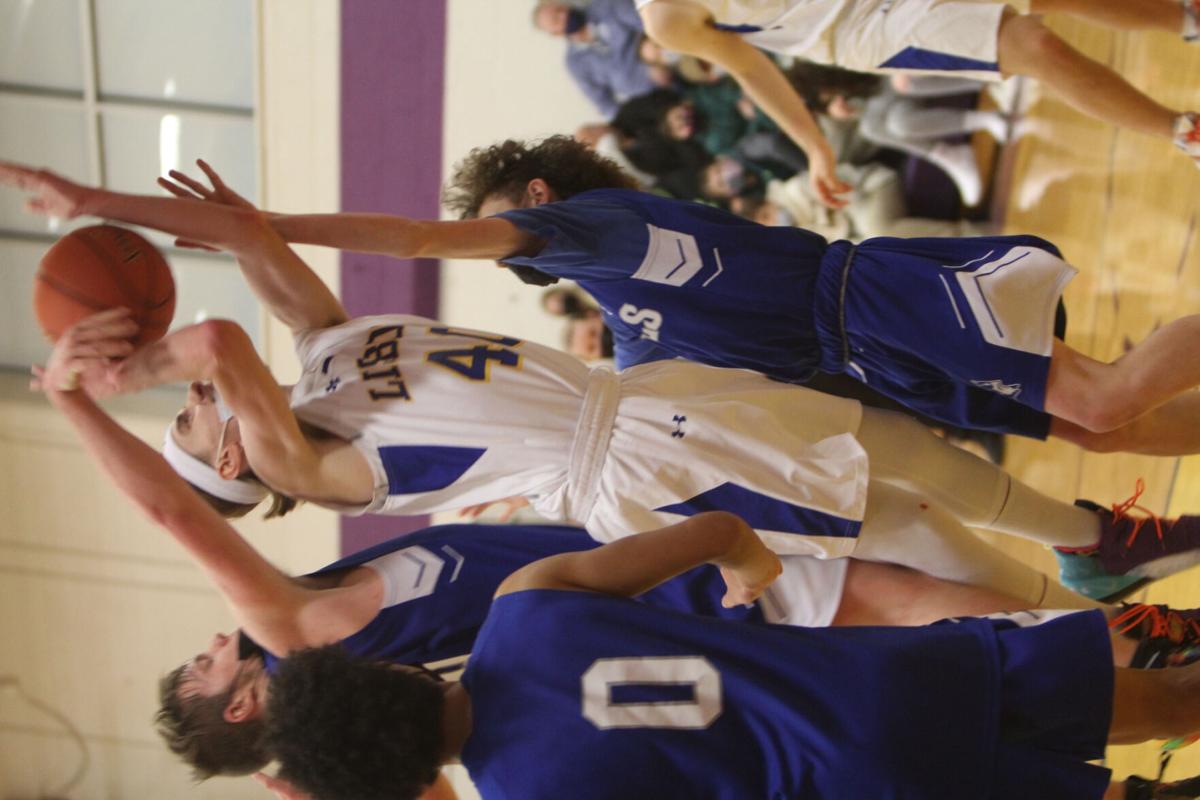 Lisbon’s Noah Martin goes strong to the basket against Conner Graveline and another OFA defender in the consolation game of the Al Gutterson Tournament in Heuvelton. Dave Shea/The Journal

Heuvelton’s Tristan Lovely scores inside on a drive against Beekmantown on Thursday in the title game of the Al Gutterson Tournament. Dave Shea/The Journal

Lisbon’s Noah Martin goes strong to the basket against Conner Graveline and another OFA defender in the consolation game of the Al Gutterson Tournament in Heuvelton. Dave Shea/The Journal

While the offense struggled the Bulldogs’ defense stayed consistent and when they broke out of the scoring lull they only trailed the Eagles 12-11.

After breaking out of the offensive doldrums early in the second quarter the Bulldogs’ accelerated their offense and defense together for an 18-8 second quarter surge capped by a 3-pointer by Nate Mashaw at the halftime buzzer, opened a 36-23 lead in the third quarter and went on to claim a tactical 52-40 win over the Eagles.

“We were very aggressive at the start of the game, maybe too aggressive so I asked the guys to dial it back little. I guess we dialed it back too much. But Tristan Lovely started making plays as our point forward and we started scoring,” said Heuvelton Coach Josh McAllister.

“Tristan’s ankle is getting better and he was able to get into the lane for shots and grab big rebounds on defense. On one of his layups he jumped off his left foot for the first time I’ve seen this season.”

Operating at a deliberate pace Lovely picked his spots to penetrate a formidable Beekmantown defense to convert hanging shots, find teammates cutting to the basket and whip kickout passes to shooters on the perimeter.

The senior tallied 10 points in the second quarter and finished with 24 points, seven rebounds, three assists and two steals and was joined on the All-Tournament Team by three teammates. Junior Nate Mashaw who buried three 3-pointers, scored nine of his 13-points in the second quarter, came through with four assists and four steals and skillfully navigated the ball through the double teams in the Eagles’ fullcourt press.

“Our defense was good throughout the game although we didn’t get a lot of steals, our press made them take a lot of time off the 30-second clock running their offense,” said Coach McAllister.

“That is a good team and they are all juniors. Next year they have some of big players up from the JVs and they could have a really good team.”

In the consolation game Lisbon took its only lead of the game and sophomore guard Connor Flack made his only shot as time expired to give Lisbon a 60-59 victory over OFA.

The Golden Knights rallied from a 49-37 deficit in the final quarter and the shot-ready Flack came from the left flank buried a 3-pointer from the top of the key off a pass from Cooper Davison as time expired. The shot came after the Knights inbounded the ball with six seconds to play.

“That wasn’t the really the play we wanted but we were definitely going for a 3 to win it,” said Lisbon JV Coach Blake Genedebien who filled in for varsity coach Bob Jordan who watched a live feed of the game at home while completing his recovery from a COVID-19 virus.

“It was an amazing game with great effort from both teams.”

The contest was a coast to coast high energy matchup from the start where both teams came out in man-to-man fullcourt presses.

The Devils, playing their fourth game in four days with only seven players, gallantly came within the last shot heroics of overcoming 22 of 34 free throw shooting, four missed free throws in the final 40 seconds and the fouling out of two near double-double performers in the climax of the game.

Dynamic OFA guard Justice McIntyre, who made 10 of 12 free throws while scoring a game-high 24 points and Connor Graveline, who went 4-5 from the line in a 13-point 10 rebound effort, combined for seven and eight points in the third quarter where the Devils expanded their lead to 49-37.

Walker and guard Cooper Rutherford (14 points) each scored six points in the fourth quarter and Martin and LaRock each tallied four.

Beekmantown used its size and athleticism in the front line as a deterrent to the Heuvelton offense and a springboard to the Eagles’ fast break to control the Junior Varsity Championship game.

The trio of Evan Dixon, Mankel Mosley and Peyton Viau combined to score 22, 11 and 17 points as the Eagles downed host Heuvelton 67-39.

Paradise and Brossoit scored eight and seven points in the title game and Landyn Ashlaw buried three 3-pointers in the second half to lead the Bulldogs with 17 points.

Trystan Biller and Camden Johnson rounded out the scoring with five and two points.