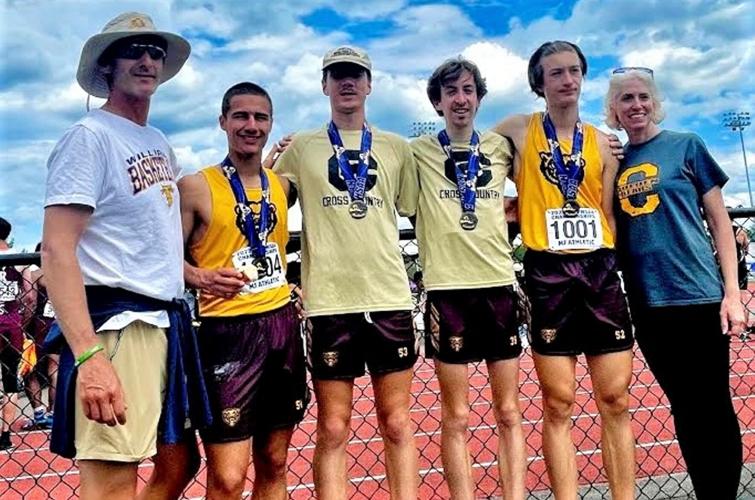 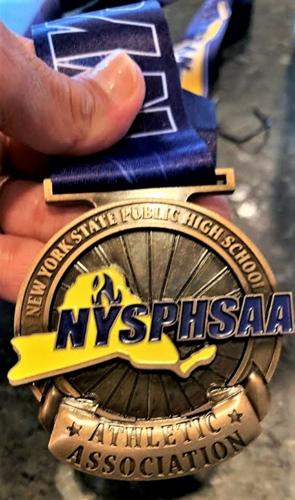 Every competitor who placed in the top six of an individual event or relay received a beautiful NYSPHAA medal. provided photo

Every competitor who placed in the top six of an individual event or relay received a beautiful NYSPHAA medal. provided photo

SYRACUSE: The Canton Central Boys 4x800 relay earned a place on the podium at the New York State Public High School Athletic Association Track-Field Championships on Saturday at Cicero-North Syracuse High School. The Golden Bear foursome placed sixth in Division 2 with a time of 8:20.84 and greatly bettered their winning time of 8:51 at the Section 10 Championships.

The team, flanked by coaches Bill Porter (left) and Debbie Lyndaker, are from left: Lisbon Central student-athlete Miles Gendebien, Max Finley, Nich Lyndaker and Hayden Bregg. Finley also placed sixth in the Division II 3000 steeplechase and Lyndaker ran third in the D2 3200 meters. Other Division D2 placers for Section 10 were: Norwood-Norfolk’s Maddie Dinneen who took fifth in the 2000 steeplechase and sixth in the 800 run and Tupper Lake’s Olivia Ellis who placed sixth in the pentathlon. Provided Photo.