Hammond’s Ava Howie converts a drive to the basket over a strong challenge by a Gouverneur defender in Wednesday’s non league game. Dave Shea/The Journal. 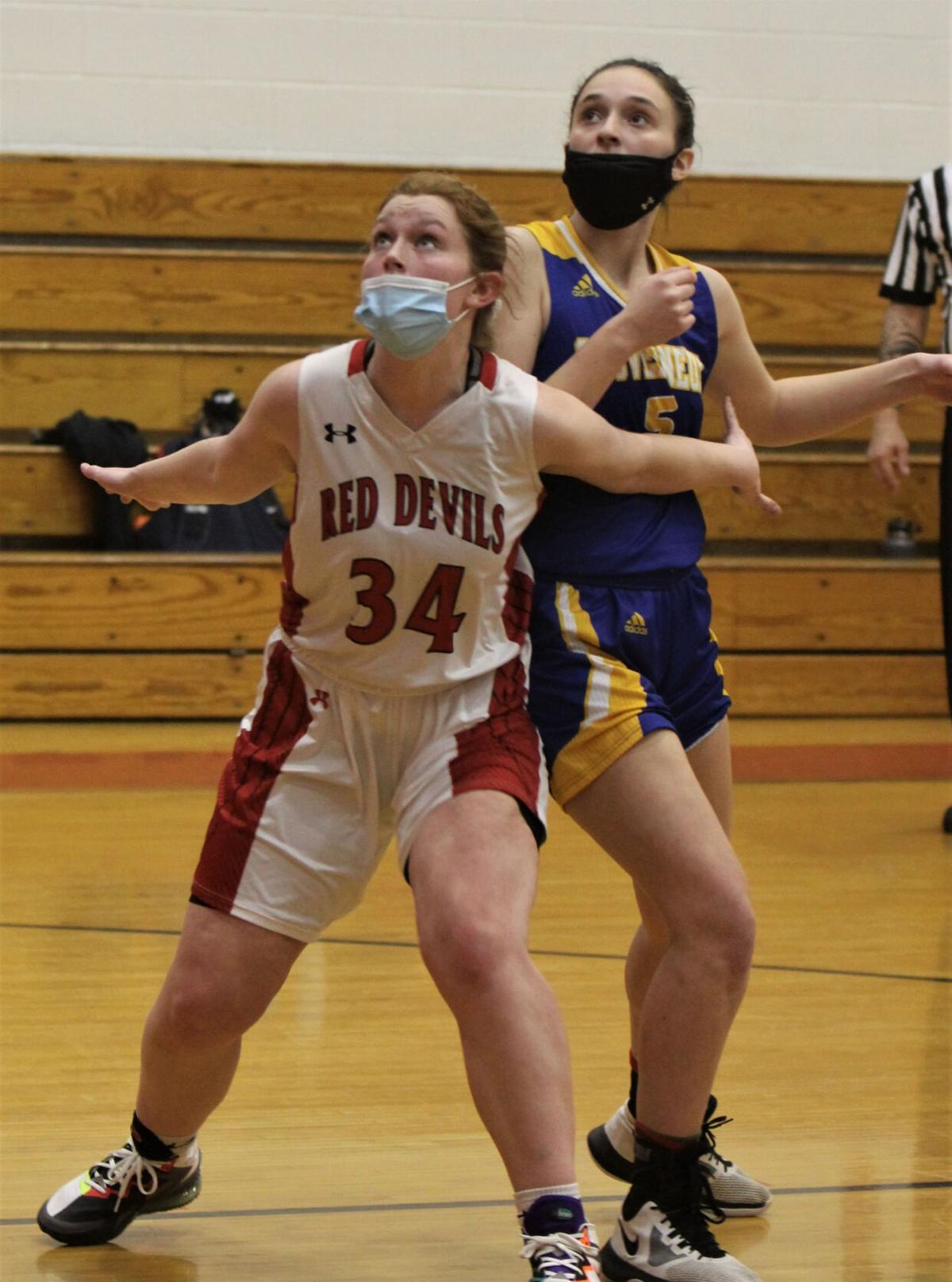 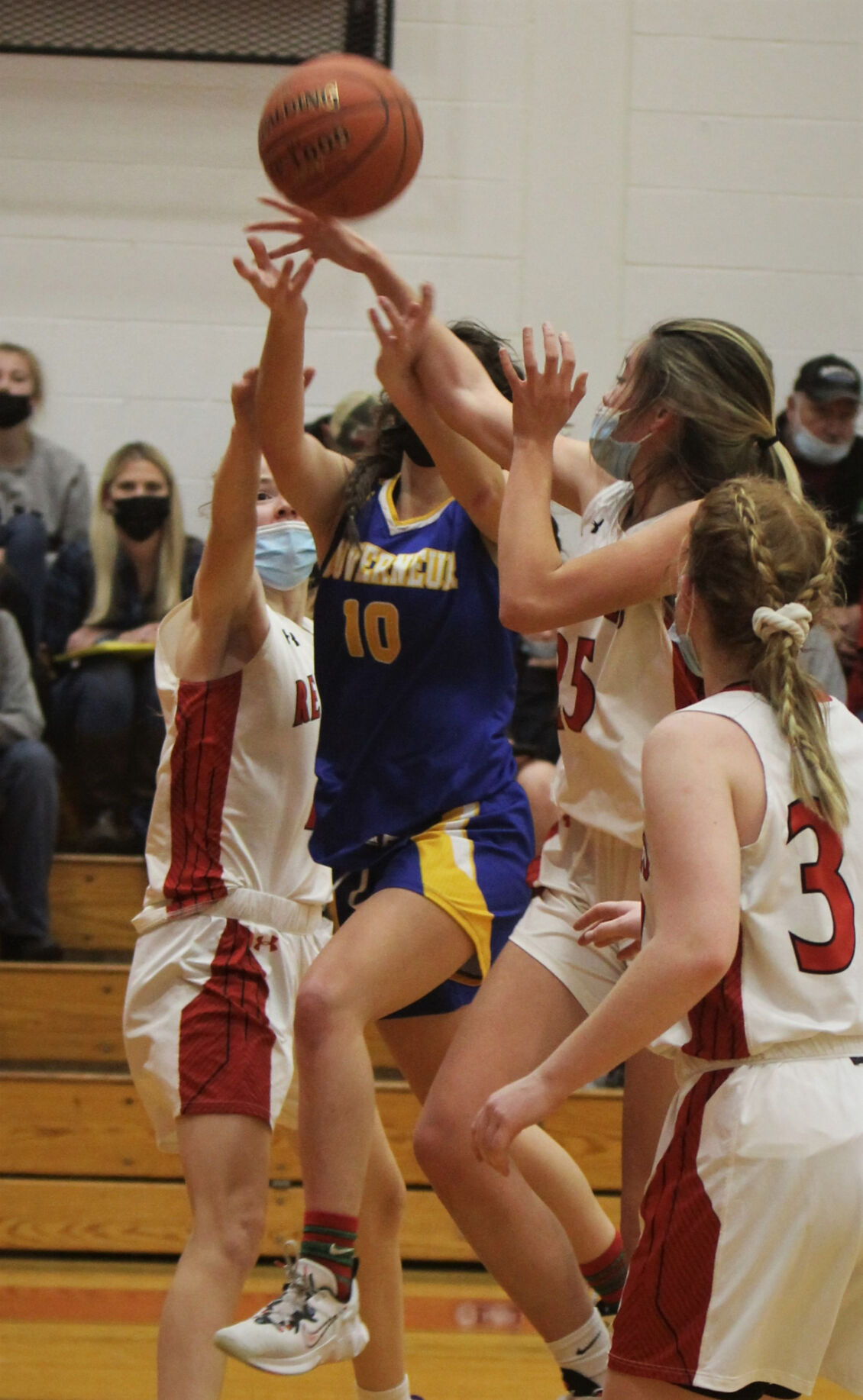 Sadey Sprabary and Landree Kenyon combine to break up a driving attempt by Cierra Besaw of Gouverneur in Wednesday’s game. Dave Shea/The Journal.

Hammond’s Ava Howie converts a drive to the basket over a strong challenge by a Gouverneur defender in Wednesday’s non league game. Dave Shea/The Journal.

Sadey Sprabary and Landree Kenyon combine to break up a driving attempt by Cierra Besaw of Gouverneur in Wednesday’s game. Dave Shea/The Journal.

HAMMOND — A COVID-19 quarantine forced Hammond into a restart mode for its NAC Girls Basketball season on Wednesday as they faced a formidable NAC Central team in Gouverneur.

Both teams made significant runs in the first half before the Lady Devils controlled the second half to gain a 62-50 victory and a 2-0 record. The Devils opened an early lead before the Wildcats used a swarming fullcourt press and four 3-pointers to take a 19-15 first quarter lead an a 32-27 halftime margin.

Landree Kenyon buried three long 3-pointers in the second half where the Red Devils dominated the defensive boards, and allowed just one 3-pointer while forging a 35-17 margin and a 62-50 victory.

While the Devils gained a key nonleague win, Heuvelton stayed unbeaten in the NAC West at 4-0 with a 77-12 win over Harrisville, Madrid-Waddington and St. Lawrence Central posted first round wins in the Don Petty Tournament in Canton and Hermon-DeKalb gained a 66-16 win over Parishville-Hopkinton.

Hammond 62 - Gouverneur 50: Landree Kenyon scored 24 of her game-high 26 points in the second half capped by a driving 3-point play produced a clinching 61-48 lead with 1:12 remaining.

“It has been tough. I had COVID, some of the girls had COVID and we have only had two practices together in the last 10 days. It was a very good game between two good teams who both made some nice runs. We just put it all together in the second half,” said Hammond Coach Alyssa Crosby.

“Landree Kenyon caught fire in the second half and we passed the ball and rebounded much better. With Hailey Manning out I had to move Landree to guard and Natalie Howie went into the post got key points for us the in the first half. Ava Howie had a great game at the point.”

Ava Howie established herself quickly scoring 10 first quarter points and went on to 15 points on the night with outstanding ball security in the second half. Natalie Howie scored all of her seven points in a second quarter to help stave off Gouverneur’s bid to take control. Alyvia Crosby and Sadey Spabary scored eight and six points with a highly contested finishes at the goal.

Heuvelton 77 - Harrisville 12: Sophomore guards Katie Cunningham and Rylin McAllister each buried four 3-pointers scoring 20 and 14 points on the night for the Bulldogs who erupted for 30 points in the first quarter.

An All Class C finals for today’s 4 p.m. championship game of the Don Petty Tournament was created as Madrid-Waddington climbed to 8-1 with a 56-20 first round win over Edwards-Knox and St. Lawrence Central (4-4) dropped host Canton 53-46 (3-3) in an NAC Central game.

M-W 56 - E-K 20: Grace Plumley and Natalie Pearson provided a productive backcourt-frontcourt 1-2 punch to anchor the Yellow Jackets’ offense with 20 and 14 points. Hailey Marcellus worked the interior for eight points and M-W continued to take control of games with its disruptive defense. Plumley and Pearson combined for seven and six points in a 17-8 first quarter lead.

SLC 53 - Canton 46: The Larries used balanced scoring to hand Canton its second NAC Central loss of the season. Briona Foster scored 12 of her 24 points in the first quarter and Rylee Daoust netted her 12 point total in the second half for SLC which pulled away with a 17-9 third quarter advantage. Horner led the complementary scoring with six points followed by Kalisa Young (3), Melanie McLean (4), Merlyn Bordeleau (2) and Danaye Ramsdell (2).

Ava and Maddie Hoy combined for 27 an 11 points for Canton followed by Josie Gabriel (4), Calie Klassen (2) and Amelia Rodee (2).

“We made 10 3 pointers on the night which great and all of our seniors (Rylie Hale with two points, Hannah Gollinger and Emma Friot with 2 points) scored on Senior Night. Hannah Coller added a 3-pointer.