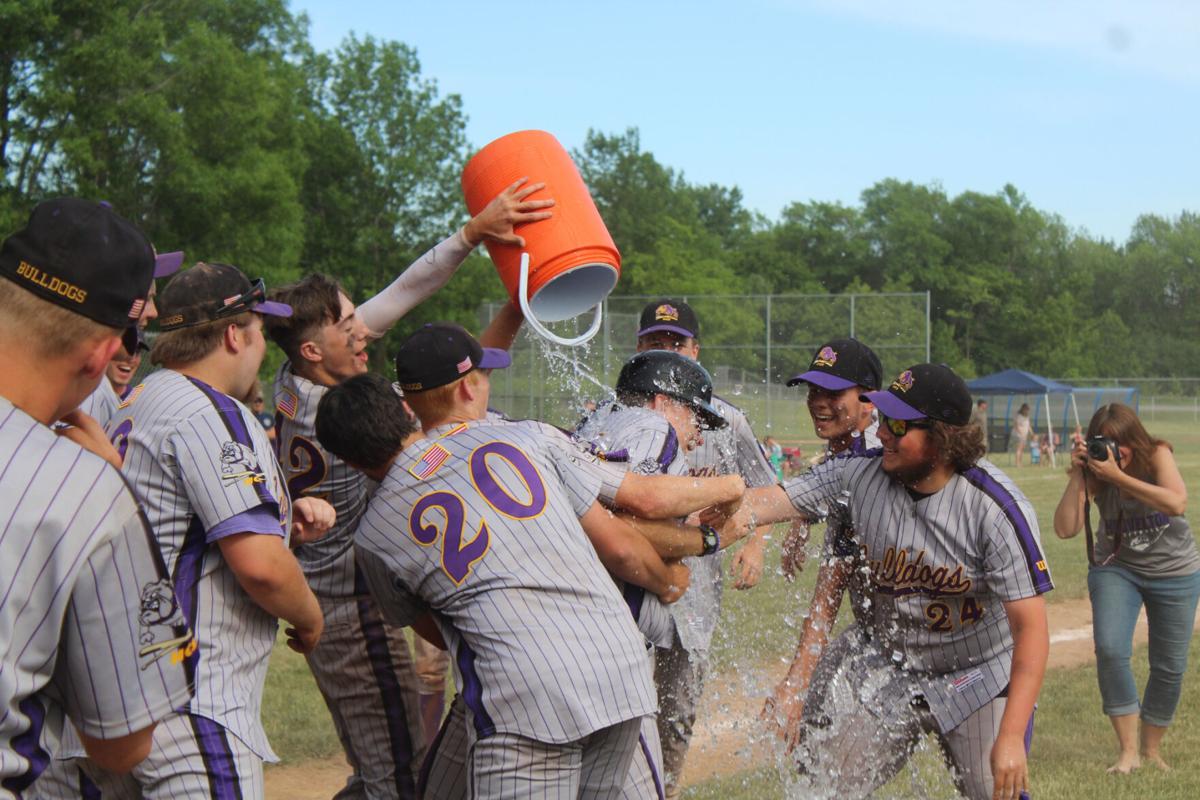 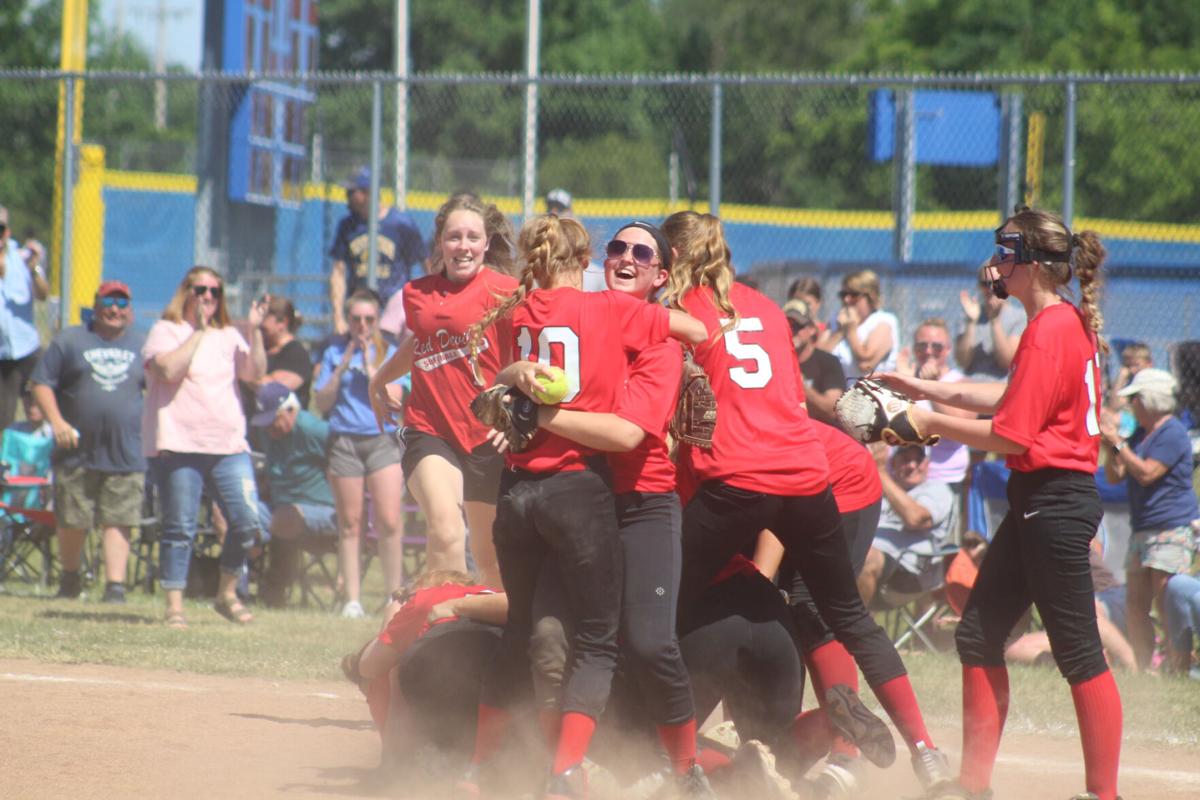 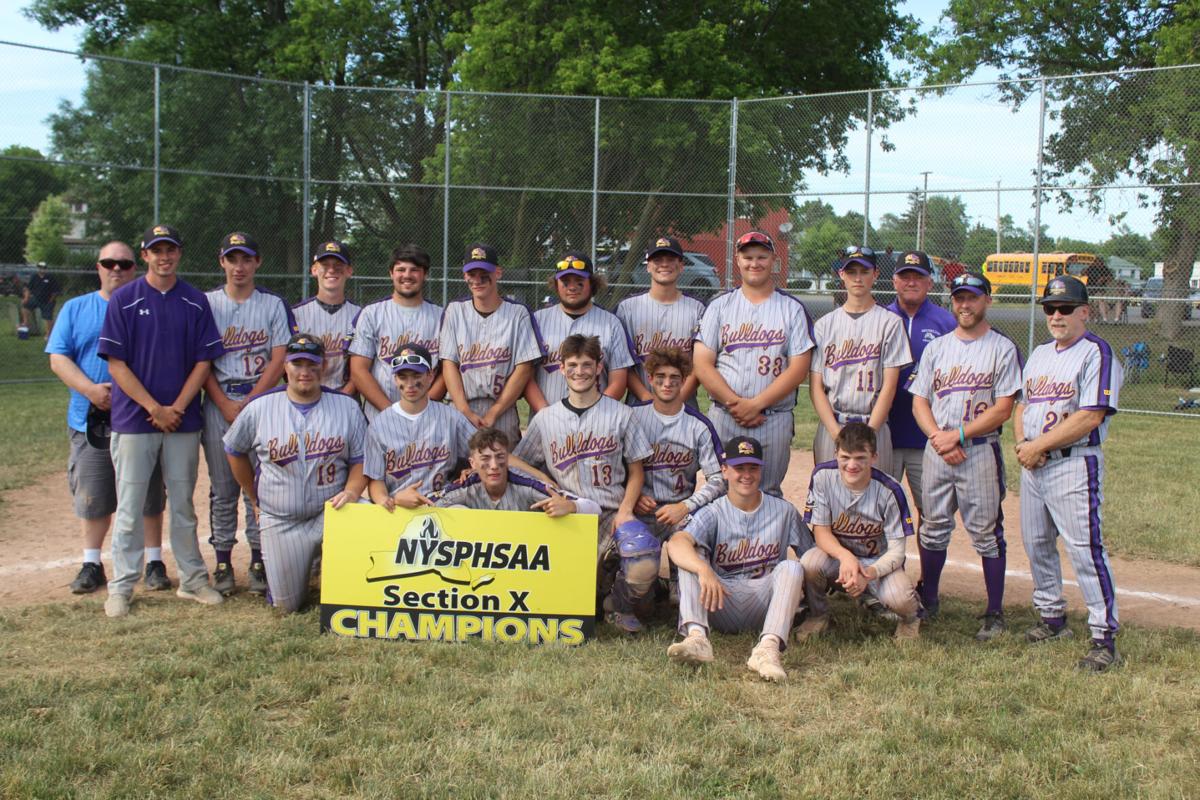 But that is where the similarity ends.

Hammond pushed across two runs in the top of the ninth inning and pitcher Sydney Tanner closed out a 10-8 victory on a game-ending double play where Hailey Cunningham made a running catch of flyball in shallow centerfield and forced a runner off secondbase.

“This was kind of a mirror image of the semi-final. We failed to make the plays early and our bats were quiet. But we never quit. Ally Trathen, Chasity Johnson, Molly Williams, Amber and Kate Cunningham and Carley Simmons got key hits after Ally Trathen came on in relief and got the big out and she worked with Lily Spooner for the next four innings to hold them scoreless,” said Heuvelton Assistant Coach Chris Sherwin.

“We had the winning run on base in the seventh and eighth innings but couldn’t push it across. We had a great year and our team was very young. Coach Pierce really put a lot of focus on doing things correctly and the kids bought in. Hammond is a very talented and athletic team. Sydney Tanner and Zoey Cunningham are one of the best batteries in Section 10.”

Hammond came out swinging against Heuvelton and rifled line drives from all angles in the first inning and exploited two errors to score three runs on singles by Hailey Cunningham and Avery Kenyon. Their quick start continued through three innings where the lead swelled to 7-0.

“Winning this game meant everything to us because we had great teams in soccer and softball but there was no sectionals. Our hitting was amazing tonight and we just kept battling and everyone stayed totally positive,” said Hammond senior Avery Kenyon who drilled two singles and a double and snuffed a Heuvelton big inning threat in the fifth inning with a diving catch and then doubled a runner off firstbase.

“Heuvelton is a great team with a great coach and they just kept coming back.”

The Bulldogs staged a rally which totally resembled a 9-8 comeback win over Edwards-Knox in the semi-finals where they erased deficits of 6-1 and 8-4.

The Bulldogs pulled into an 8-8 tie with two runs in the third, fourth, fifth and seventh innings while Ally Trathen pitched four scoreless innings in relief. The comeback climaxed in the seventh inning when the Bulldogs tied the score at 8-8 when Chasity Johnson and Molly Williams drilled back to back ground rule doubles and Amber Cunningham stroked an RBI single.

Hammond hurler Sydney Tanner stranded the potential winning run and pitched out of serious jeopardy in the eighth when Alyvia Crosby handled a tough chance at thirdbase with the winning run at third.

In the top of the ninth Kenyon stroked a leadoff single, Crosby reached on a fielders choice. Kenyon scored on a wild pitch and Crosby raced home on a groundout RBI by Ava Howie.

“This was a great win. They had errors early in the game and we had errors late in the game but we were able to win it with defense,” said Hammond Coach Katina Dillon.

“Heuvelton is such a tough team but Sydney Tanner was able to close very strong on the mound.”

Molly Williams, who was honored as the NAC West Division MVP in the awards ceremony following the game, rapped a double and two singles. Ally Trathen also singled twice and doubled and starting pitcher Chasity Johnson singled and doubled and scored three runs.

“I am really proud of the way the girls battled back today when we were down. They dug deep and stayed mentally focused. We were able to tie it up but fell just short in the end. Hammond played a hard game all the way through. Congrats to them,” said Heuvelton Coach Eliza Pierce.

“My seniors (Lara Martin, DaKota West, Amber Cunningham) have put in so much work and I know they are off to great things. We had a great season.”

Assistant Coach Chris Showers offered his praise for the Bulldog seniors who anchored the team chemistry.

“We will miss our seniors. Lara Martin is everything a true teammate stands for. Dakota West and Amber Cunningham are kids that have showed up everyday since fourth grade. They put in the work and waited for their show. Molly Williams is one of those players that doesn’t come around often. Her natural ability as a hitter is why she is one of the best ever to wear our uniform. we look forward to see what the future holds for them.”

On Thursday they extended their outstanding seasons into the Section 10 Class D title game with amazing seventh inning comebacks to thwart outstanding pitching performances by Cadey Wheat of Edwards-Knox and Bri Grant of Hermon-DeKalb.

Heuvelton hitters fought off numerous two-strike deliveries by Wheat to score five runs in the bottom of the seventh inning and snatch a 9-8 victory on a daring delayed steal of home by Carley Simmons with two outs.

Hammond never solved a career effort by Hermon-DeKalb pitcher Bri Grant but had two batters reach base on passed balls after swinging strike threes in the bottom of the seventh where they scored three runs to shade H-D 3-2. Eighth grader Ava Howie capped the rally with a two-run walkoff groundball single up the middle with no outs.

Heuvelton’s victory over E-K (8-5) hinged upon the ability of Heuvelton’s Ally Trathen, who relieved starter Chasity Johnson in the top of the seventh, to escape a threat by the Cougars to take total control of the game.

With E-K leading 8-4 and Cougars perched on second and third with one out, Trathen fielded a bunt and threw out the runner trying to return to thirdbase and then enticed a infield fly.

The Bulldogs then used five great at-bats to score four runs to tie the score at 8-8 with no outs. Lily Spooner drew a leadoff walk and Trathen, Johnson and Molly Williams followed with successive singles which tied the score. Cadey Wheat, who struck out 12 in the game, gained the first out with a strikeout and Carley Simmons drilled a single to tie the score, stole second and took third on a wild pitch.

After Wheat gained the second out with a strikeout Simmons broke for home on a delayed steal and scored when the hurried throw sailed high over the reach of the catcher.

Hammond entered the bottom of the seventh of its semi-final game facing a 2-0 deficit against H-D hurler Bri Grant who retired the first nine Devil batters and had allowed just three hits through six innings.

But she would never get an out in the seventh despite recording her 10th and 11th strikeouts of the game.

Avery Kenyon led off with her second single of the game and stole second. Alyvia Crosby and Hannah Belknap followed by beating out throws to first on passed balls on swinging strike threes. Kenyon scored on a passed ball and Ava Howie stroked a walk-off single up the middle which scored two runs.

Belknap also tripled in the game where Hailey Cunningham singled.

Hannah Tanner skillfully pitched her way through eight hits by H-D which scored single runs in the second and third innings. Bailey Wright delivered an RBI single in the second and Audri Tehonica doubled in the third and scored on a two-base error.

In 2019 Heuvelton as the top Class D seed was upset in the Section 10 Class D baseball finals by Lisbon which went on to the New York State Final Four. Last season, just after Heuvelton started practice for a quest to reclaim the Class D title, the COVID-19 pandemic put sports at all levels on lockdown.

“It really means a lot to win this title after waiting two years,” said Adam Calton who picked up the victory after relieving starting pitcher Jordan Sawyer in the fifth inning.

“It feels amazing because I did it with guys who come in everyday and do the work. Now we get to go on which should be fun. It was a good game today, E-K was tough.”

The Bulldogs (11-3) opened a 3-0 lead in the first two innings and E-K (7-6) pulled into a 3-3 tie in the top of the fifth inning with pitcher Jared Lottie anchoring the comeback allowing just four hits in authoring his fourth complete game of the season.

Heuvelton broke tie in the bottom of the sixth when Lucas Thornhill was hit by a pitch, moved around to third on a single by Braeden Free and a walk to Jacob Martin and scored a bases loaded wild pitch.

Calton then retired the side in the bottom of the seventh inning aided by a spectacular diving catch by rightfielder Brandon Pray on a flyball in foul territory.

“This game was a lot like a lot of championship games where there aren’t a lot of runs scored. Jordan Sawyer was the big key for us, he got us to the fifth inning where Adam Calton could close,” said Heuvelton Coach Dave Steele.

“Jordan is a lefty and he throws strikes. Edwards-Knox was tough and their pitcher threw well. We didn’t hit as well as I would like but we played good defense and Adam closed very strong.”

Mason White and Kolby Barbarito singled and scored for E-K in the fourth inning where Joe Huckle stroked an RBI single. Andrew Frankln walked and scored in the fifth inning to score his team’s third run.

“We had a good season and guys improved all the way. We won three of our last four games to get the third seed. This was a good baseball game with pitchers throwing strikes and guys making pays and not making many errors,” said E-K Coach Rob White.

“And it was a lot like our game at Tupper Lake. Tyler Scott pitched a good game up there. Jared Lottie really had a great season for us.”

Heuvelton advanced to finals with a 19-5 win over Morristown.

Jed Crayford pitched the first four innings to get the win and Lucas Thornhill closed in the fifth.

Morristown earned a trip the semi-finals with a 5-4 win at Parishville-Hopkinton on Tuesday where they broke a 4-4 tie in the top of the sixth inning when Tristin Simmons tripled and scored on a sacrifice fly by Kade Marshall.

Simmons tripled and singled to drive in three runs and pitched the win for the Rockets and Ethan Gravelin singled twice. Cooper Bennett and MaCaulay Ritchie both delivered RBI singles and Wyatt Sullivan singled.

E-K scored two decisive runs in the fifth as Kolby Barbarito and Cade Huckle provided singles that drove in runs. Barbarito, Huckle and Jared Lottie all had two hits, among the eight for the Cougars. For the Jacks (5-7), Griffin Sheeran rapped three hits and including a triple.