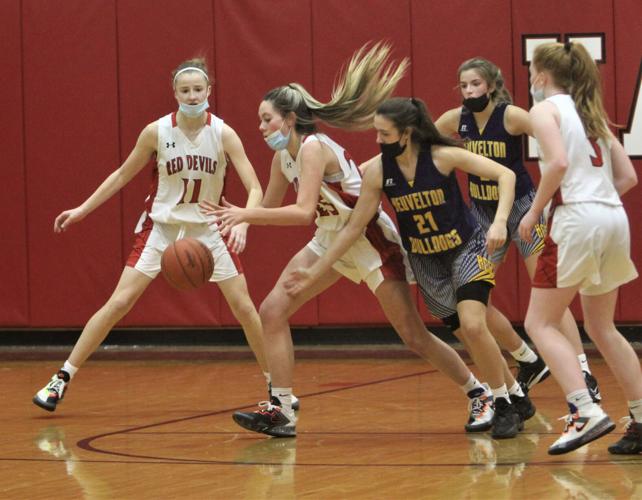 Hammond’s Sadey Sprabary breaks out of a crowd of players in Tuesday’s game with Heuvelton. Dave Shea/The Journal 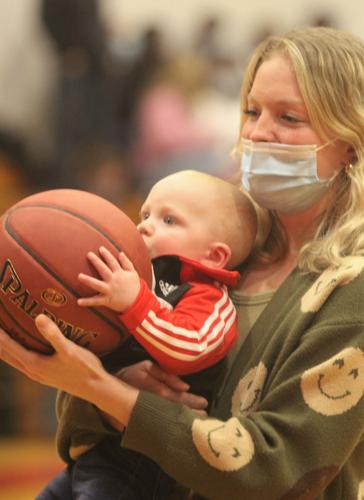 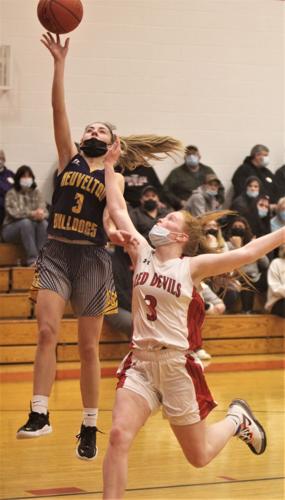 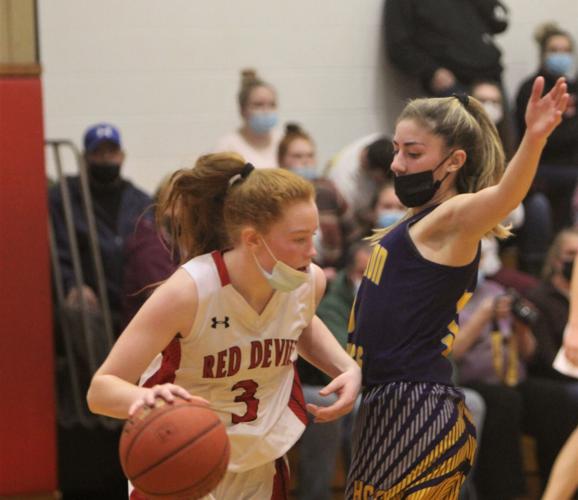 Hammond’s Sadey Sprabary breaks out of a crowd of players in Tuesday’s game with Heuvelton. Dave Shea/The Journal

And Heuvelton knew it had to protect the backboards against the athletic length of Hammond’s front line.

The Red Devils executed their top priority with great poise while Heuvelton was unable to carry out its primary directive. The Lady Devils exploited foul trouble in the Bulldogs’ ranks posting a 56-49 win.

Hammond center Landree Kendall ignited fast starts in both halves and scored game-high 30 points in the first three quarters. Guard Ava Howie emerged as the closer on offense scoring all 11 of her points after a Dakota Mouthorp jumper pulled the Bulldogs even at 42-42 with 5:36 to play.

Kenyon scored 12 points in the first quarter with a pair of 3-pointers and 13 points in the third quarter where Devils gained a 16-8 scoring advantage. Hailey Manning provided an active game on the defensive boards and scored six points.

“Landree Kenyon did a great job in the post. She is so athletic and she can be dominate,” said Hammond Coach Alyssa Crosby.

“Heuvelton has a great team which is very aggressive on defense. We practiced very hard at protecting the ball and the girls played with great poise.”

Katie Cunningham tallied 12 points penetrating the lane and Rylin McAllister buried three 3’s scoring 11 points for the Bulldogs who led by as many as seven points in the second quarter and erased a 42-35 deficit scoring the first seven points of the fourth quarter.

Ali Trathen played her way through foul trouble in a seven-point effort, Raya McGaw tallied six points in the low post off the bench and Bella Doyle tallied five points after encountering early foul trouble and fouling out in the fourth quarter.

“It was a great game and Coach Crosby did a great preparing her team. We knew we had to box out well and we just didn’t do it well enough and got into a lot of foul trouble,” said Heuvelton Coach Rob Powers after the match of the state’s third (Hammond) and sixth (Heuvelton) ranked Class D teams.

“But we play them again next week and hopefully we will have a third game. It is a matchup of two very good teams and we have to play better.”

Rounding out the Heuvelton scoring were: Lilly Spooner (3), Dakota Mouthorp (4) and Carley Simmons (1).

C-P 51 - Lisbon 42: Kiana Hogle and Landree Chamberlain delivered decisive scoring bursts in the second half as the 9-3 Colts used their defensive pressure to surge past a 22-21 halftime deficit. Hogle buried three 3-pointers in the third quarter scoring nine of her 16 points and Chamberlain scored 10 of her 20 points in the fourth quarter.

Issy Vaccaro delivered eight points for the Colts and Malia Hogle (2), Katleigh Jacot (2) and Natalie Butterfield (3) rounded out their scoring.