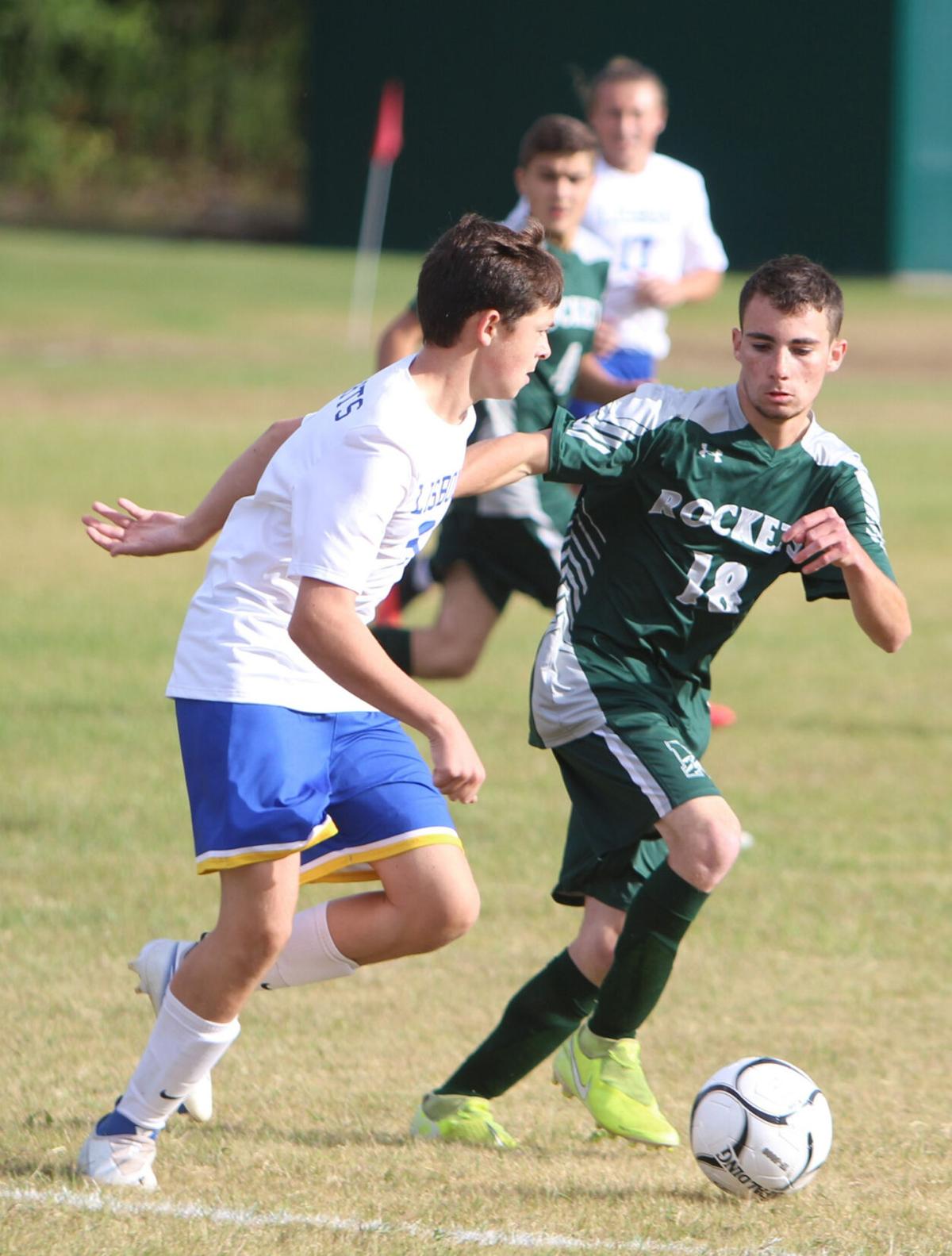 Lisbon’s Lucas Garvlin makes a move on the outside against Colin Howard of Morristown in Friday’s game. Dave Shea/The Journal 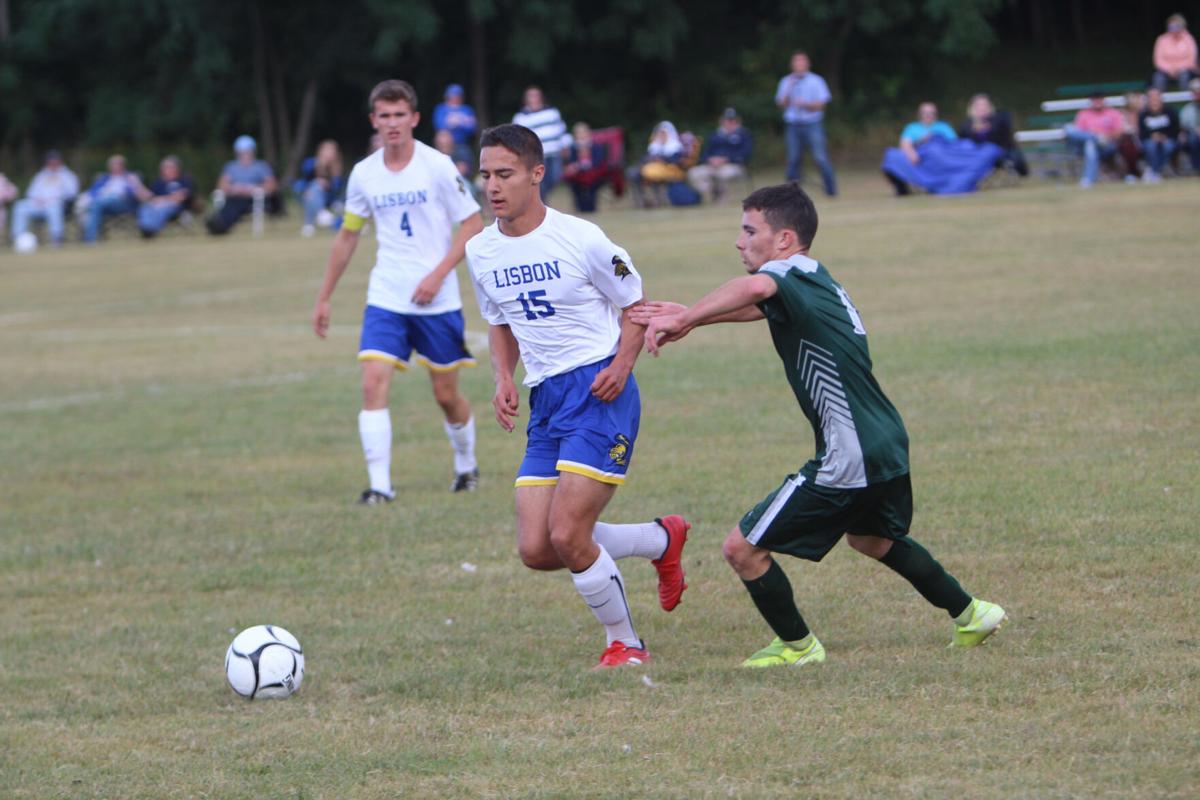 Lisbon’s Lucas Garvlin makes a move on the outside against Colin Howard of Morristown in Friday’s game. Dave Shea/The Journal

The Lisbon Boys downed Morristown 3-1 and the Lady Devils claimed a 5-1 win over Edwards-Kox.

After Lisbon Central gained a 3-1 win at Morristown in a match of two highly regarded unbeaten NAC West Boys Soccer teams both coaches had singular comments on the game.

“We have to finish better. Today we played great soccer but missed on too many chances,” said Lisbon Coach Diky Marcellus.

“We definitely controlled the play and moved the ball and we had that one breakdown which they scored on. But that was upsetting because it came when we didn’t do what we have worked on in practice. Avoiding fouls and clearing the ball.”

Morristown Coach Glenn Colby spoke of a need for toughness after the contest where Lisbon’s ball control limited the touches of dangerous striker Tristan Simmons.

“They beat us to the ball the whole game which allowed them to control the midfield and pressure our defense. We have play harder and hustle more.”

Lisbon’s offense was centered around Lucas Gravlin and Alex Vesel who connected twice to give Lisbon a 2-0 lead.

In the 14th minute of the first half Vesel controlled the ball deep in the Morristown end and dropped a pass back Gravlin for a low shot past a diving Morristown keeper Peyton Donnelly. Thirty nine seconds into the second half Gravlin lofted a cross from the right wing to the far corner where Vesel headed it into the net.

Midway through the half Morristown converted an opportunity after a foul in the defensive zone when Aaron Woodcock sent a cross through and Zane Washburn buried a shot in the lower right corner of the net in a scramble.

Lisbon regained a two-goal lead with 13:44 to play when Isaiah White controlled the ball along the endline and send a cross to the front of the goal where Chase Jacobs took a shot which was blocked by a defender, controlled the rebound and chipped the ball into the net.

Lisbon 5 - E-K 1: All five Lisbon goals came off assists illustrating the fine team play of the Lady Knights (3-0, 2-0 NAC West) who scored four times in the second half to break away from a 1-1 tie. Emily Jordan scored from Leah Warren for Lisbon in the first half and Katelyn Benzel answered for E-K from Maryann Durham.

Jordan scored from Warren to start the Knights’ pull-away followed by Ava Murphy scoring from Rachel LaRock and LaRock converting off a setup by Jordan. Ava Murphy closed out the scoring from Gabby Richardson.

Grace Smith made 10 saves for Lisbon and Kayleigh Allen handled 11 shots for E-K.

“We could not be any more proud of these young ladies tonight. After a fairly flat start they came out stronger than ever and started dominating in the midfield,” said Lisbon Coach Courtney LeBeau.

“Once we started playing our game our quality scoring opportunities really opened up. Our goals and assists were spread out throughout showing our versatility. E-K is a very speedy and well coached team who made us earn it tonight.”

“Our defense was anchored by Logan Cordova tonight and it gave us a chance to try some other things on offense,” said M-W Coach Ryan Robinson.

“Adam Britton did a great job tonight with a roster full of ninth and tenth graders. He is in the middle of a complete rebuild right now and is doing a great job of getting them ready. We have to now get ready for a Colton Pierrpont team on Monday at home. That is going to be a big test for us. They always come ready to play.”

M-W 2 - B-M 0: Maddie Armstrong scored from from Laney Tiernan in the 20th minute of the first half and Hailey Marcellus netted the insurance goal Grace Plumley with 10 minutes to play.

Potsdam 1 - Malone 0: Alex Baxter scored on a direct kick in the second half for Potsdam in a Northern Athletic Conference Central Division.

P-H 2 - Chateaugay 1: Jon Snell scored one goal with one assist to lead Parishville-Hopkinton (2-2, 1-2) in an East Division game. Avery Zenger also scored for the Panthers. Ethan Cook scored for Chateaugay (1-2, 1-1).

Harrisville 2 - South Lewis 0: Nolan Sullivan made five saves to shut out South Lewis (1-1) in an opening game of the Harrisville Tournament. Trent Briggs and Tanner Sullivan scored for the Pirates and Tucker Kelly added an assist (3-1).