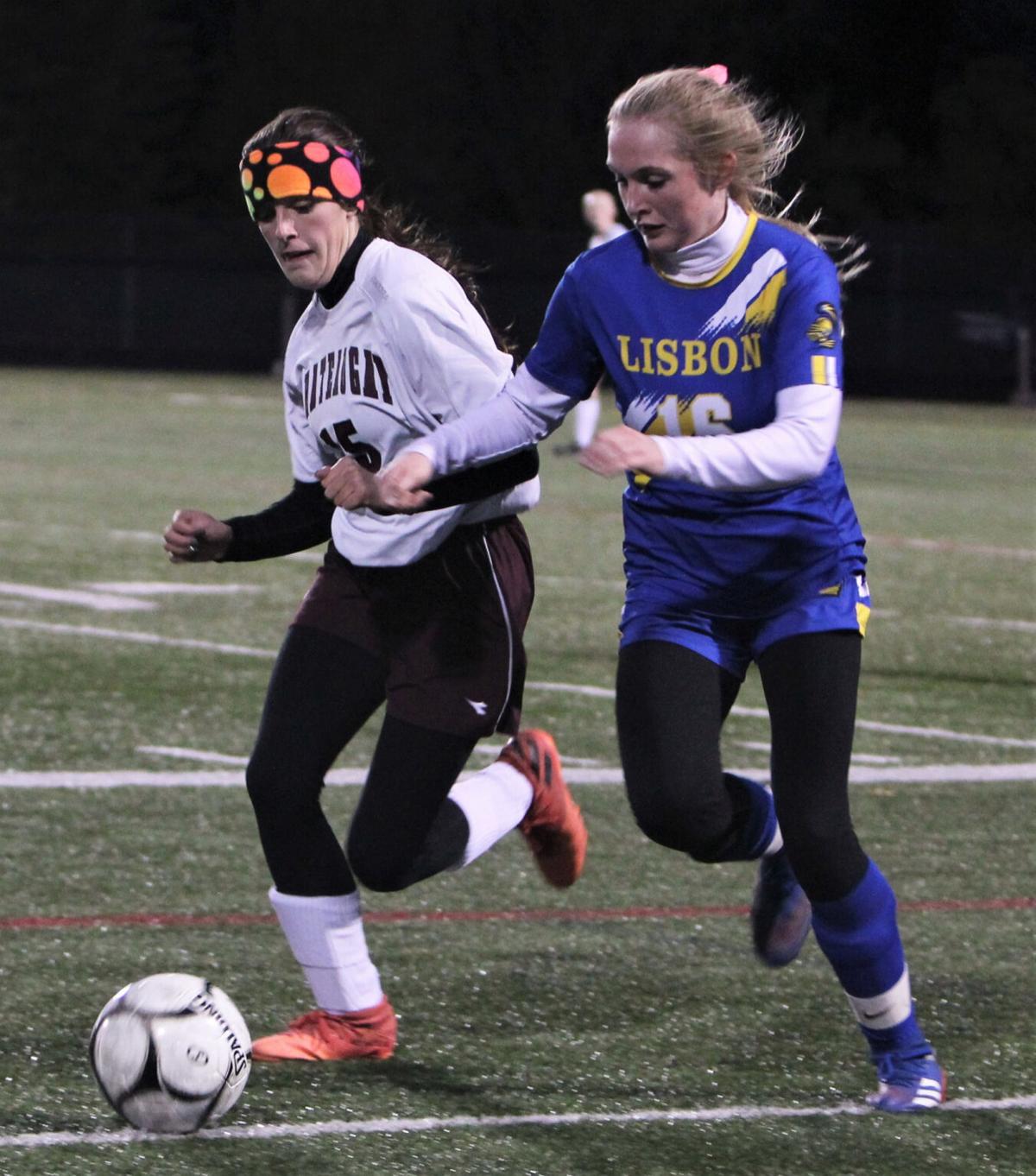 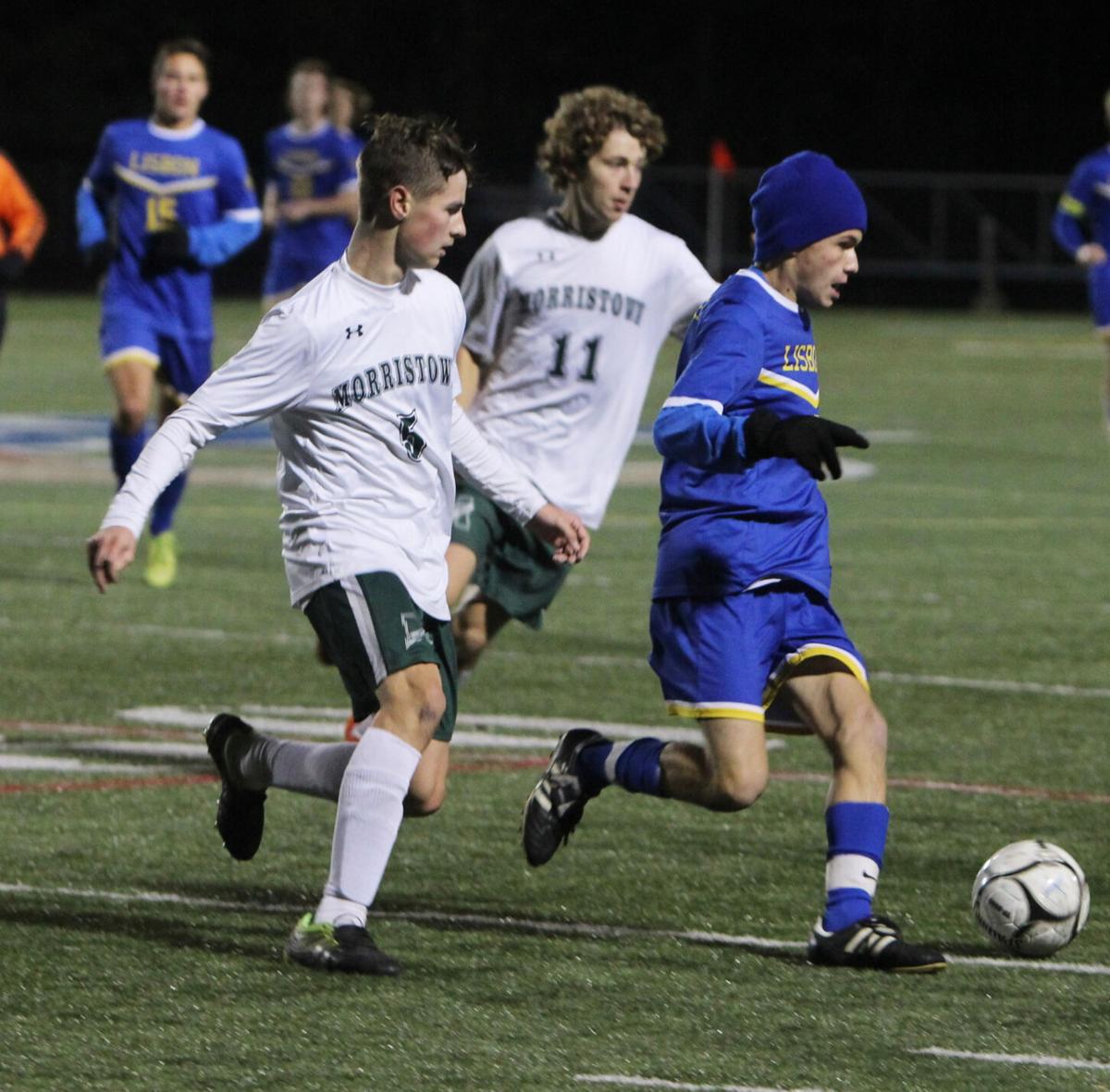 Four Class D Champions were crowned during a marathon night of Section 10 Soccer at Potsdam High School on Monday.

Lisbon’s top-seeded Boys and Girls teams both claimed shares of the coveted titles but it was the Golden Knights’ Boys and the second seeded Chateaugay Girls who passed through the state tournament portal by winning shootouts.

Chateaugay closed out the Lisbon Girls 4-2 in the shootout after a 0-0 tie through four overtimes. The Golden Knights locked up their berth in the states wth 3-1 edge in the shootout where goaltender Caleb Richardson made three saves.

Chateaugay goaltender Rachel Morgan made four outstanding saves, two from point blank range to deny NAC West MVP Emily early in the game and late in the first sudden victory overtime, to cushion the effect of Lisbon’s 24-10 edge in shots on goal.

Lisbon keeper Grace Smith was very active running down long lead passes in the penalty area and defender Eliza McLear denied the Bulldogs in sudden victory overtime clearing a looping shot by Ali Johnston from the left wing from the showdown of the crease near the right corner.

The Bulldogs (16-2-1) driving force Olivia Cook, took six their 10 shots through the four overtimes, and led off the shootout with a goal.

Kate Bleakley, Kylie Peters and Kara Dumas followed with goals to close out the Knights who managed only goals from Warren and Julia Rishe in their first four attempts.

Morgan finished with 12 saves for the Bulldogs and Smith handed five saves for the Knights who were cited for fulfilling their quest for a championship season.

“It’s amazing. It’s an amazing feeling, we’re so proud of those kids,” Bulldogs head coach Jason LaPlante said. “Those kids have got a lot of heart. They’ve got ‘it.’ They can just dig down and go and even if they did run out of gas (tonight), they weren’t gonna show it. They’re a special group of kids.”

“At the start of the season our goal was to put a banner on the gym wall. And we achieved that. Tonight I thought we played very well and dominated much of the game but we couldn’t get a shot to go in” said Lisbon Coach Courtney LaBeau who was honored as the NAC West Division Coach of the Year.

“We put Lisbon back on the map for the first time and in a few years and we plan to stay there. Sometimes the better team doesn’t go on. But I am just so proud of every one of these girls and we will be back.”

The scouting report on the Lisbon Central Boys Soccer team for the state tournament was revised at Monday’s Section 10 Class D Championship game.

Thanks to junior goaltender Caleb Richardson

And thanks to Richardson the Golden Knights are in the state tournament and matching up with Section 7 of Chazy of Section 7 at 1 p.m. on Saturday for a berth in the Class D Final Four.

Richardson made a brilliant full length diving save late in the second sudden victory overtime on a shot by Seth Witherhead targeted for the upper lefthand corner of the net. The save thwarted a “golden goal” bid by Morristown after the Rockets staged a stunning rally from a 2-0 halftime deficit.

The sudden victory overtime passed with a 2-2 tie and the top seeded Golden Knights (14-1-2) and seventh seeded Green Rockets (12-5-1) were declared co-champions and advanced to the shootout.

“Before tonight we might have had a question mark about goaltending. Not that Caleb isn’t a good goalie but he just wasn’t tested a lot,” said Lisbon Coach Diky Marcellus.

“Tonight he saved our season”.

Lisbon took a 2-0 halftime lead on unassisted goals by Gendebien and Walker and Morristown countered in the second half with a Seth Witherhead goal from Tristin Simmons and a Bennett goal from Aaron Woodcock.

Richardson made three saves through overtime and Petyon Donnelly finished with four saves for Morristown.

“On the save in overtime I lost sight of the ball when he shot it. Then I saw it and I just had to go all out. It was really a tough game Morristown played very hard” said Richardson.

“In shootout I thought I would be really nervous but I felt comfortable.”

Even though they failed to connect on a series of scoring opportunities the Golden Knights felt comfortable at halftime because wing defender Storm Walker buried a direct kick 12 seconds before intermission.

In the 12th minute Gendebien controlled a deflected cross just outside the penalty area and drove a shot along the ground into the net.

The Rockets broke through with 12:05 to play in the second half when a long throw-in by Simmons started a scramble in front of the Lisbon net and Seth Witherhead buried a deflection. With 4:02 to play Bennett tied the score when heading home the deflection of an Aaron Armstrong direct kick.

“We simply have to finish our chances and tonight we didn’t do that. Morristown played a lot of long balls trying to pressure our defense and they were able to come back from a 2-0 deficit,” said Coach Marcellus.

Morristown Coach Glenn Colby praised his team for reaching the goal of winning a sectional title.

“They stuck with the plan and they really played well tonight.”