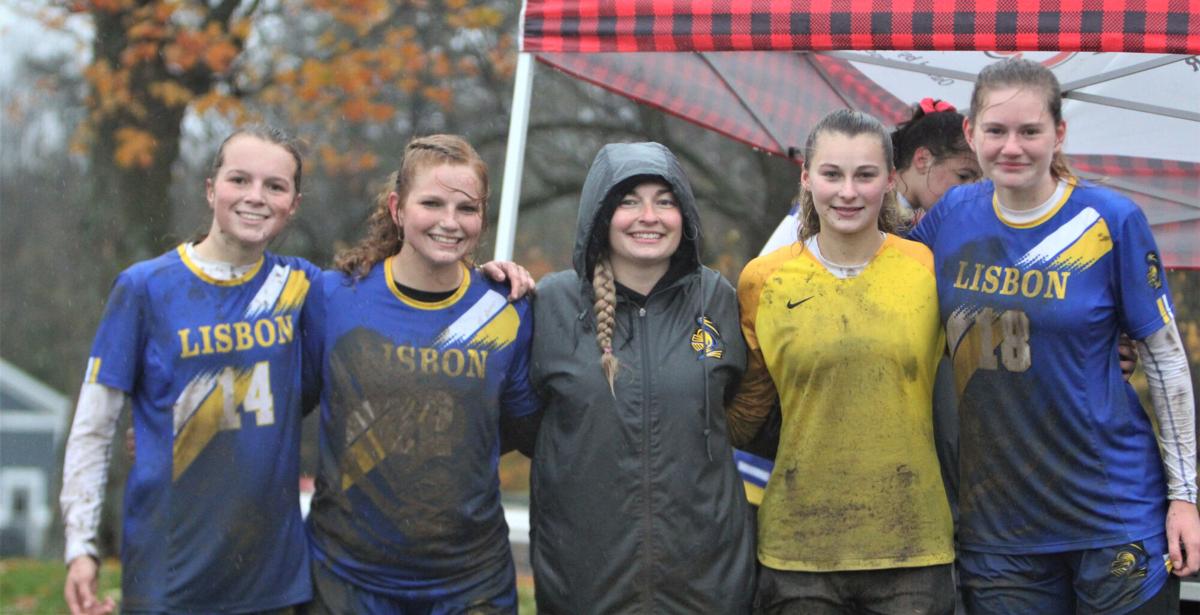 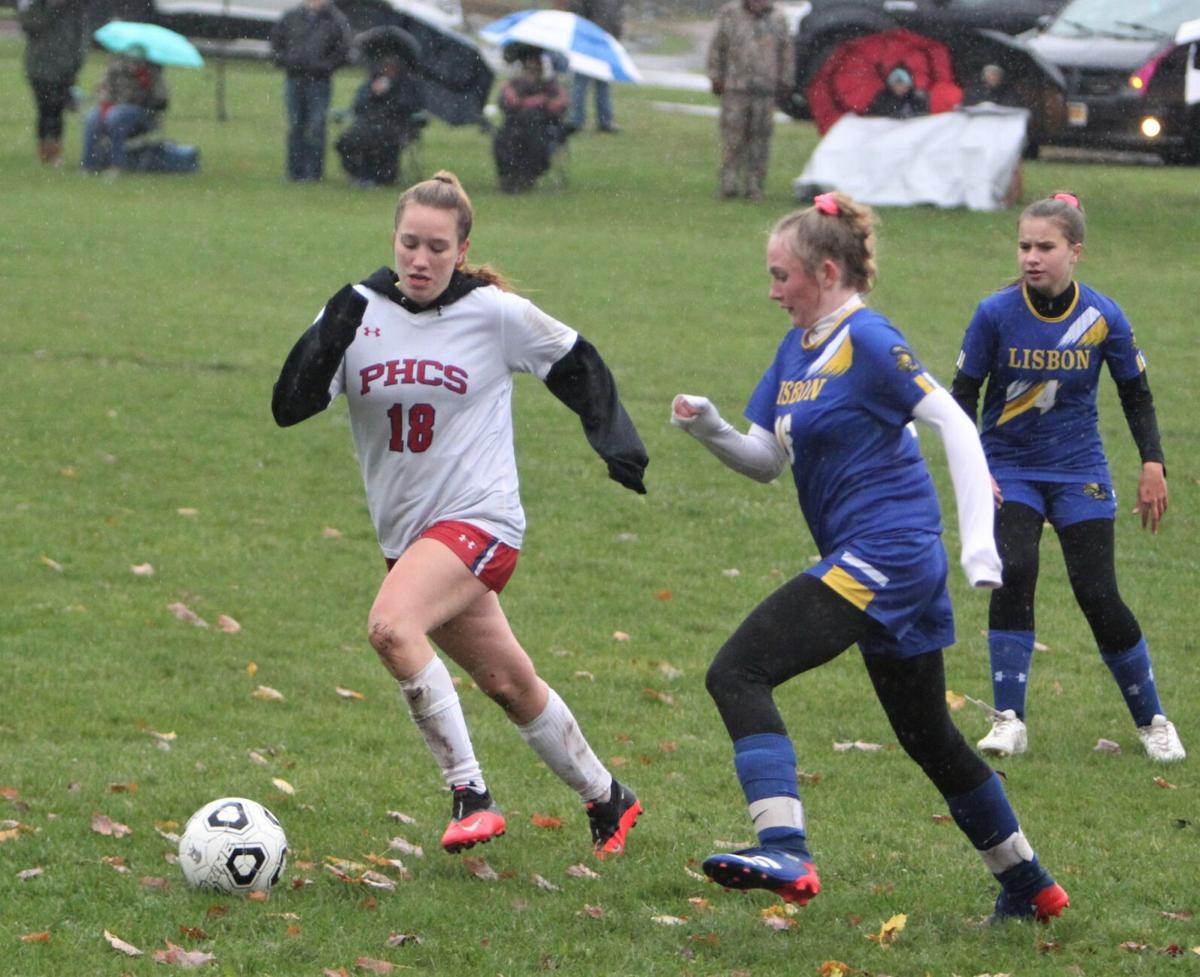 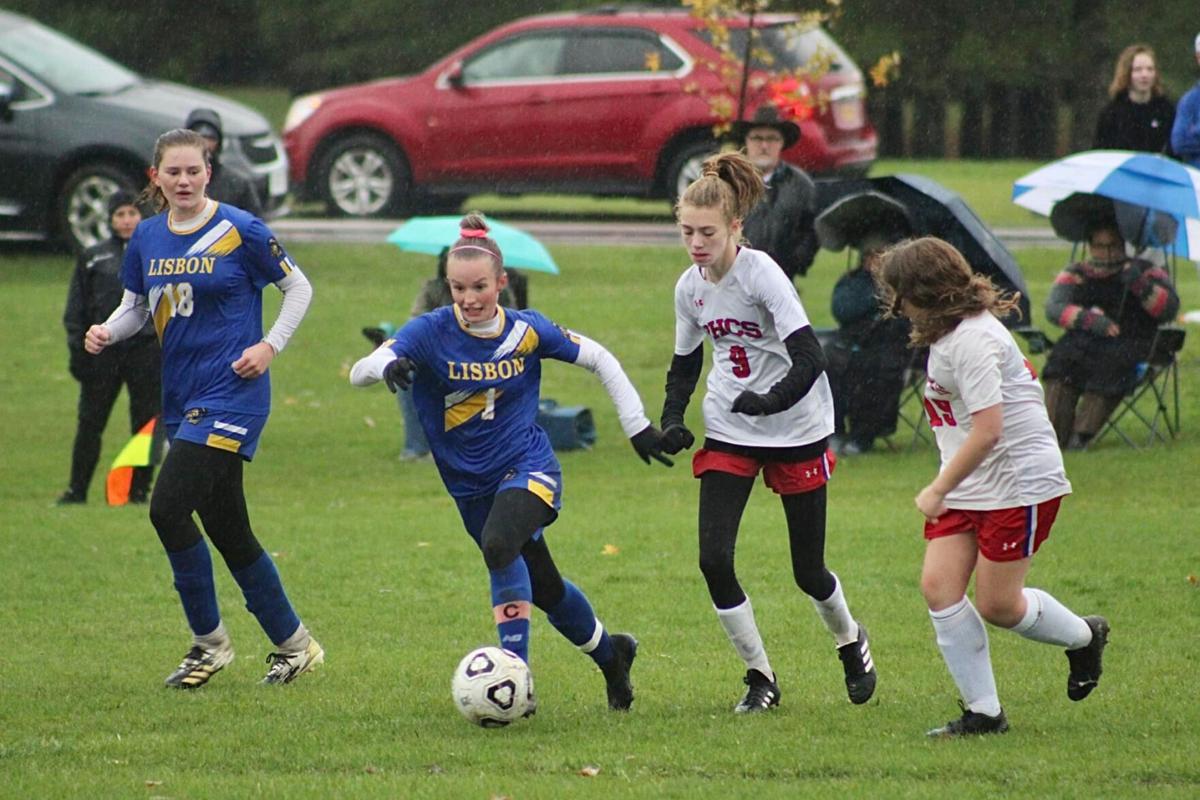 As the old saying goes Tuesday afternoon was “a day not fit for man or beast”.

But despite the constant cold rain which flooded the varsity field, playing on the modified field on the high ground suited the top seeded Lisbon Golden Knights just fine for a Section 10 Class D quarter-final game with Parishville-Hopkinton.

Following a 5-1 win they celebrated with slides in the mud of the one of the goal creases.

“Playoffs is a whole new season and I couldn’t be more proud of how we started it tonight. Against the weather and the last minute field change we were victorious. The whole team came together and played great,” said Lisbon Coach Courtney LaBeau.

“Sliding in a mud puddle was a fun way to celebrate a win.”

Senior Emily Jordan flourished in the conditions in the final home game befitting of her outstanding career. She figured in all five goals as the top seeded Knights (16-1) gained a berth in Thursday’s 7 p.m. Class D semi-final game against the winner of a game between fellow NAC West teams Hammond and Heuvelton which was postponed until Wednesday because of flooded field conditions.

The other semi-final game at 5 p.m. will be an All-NAC East affair with second seeded Chateaugay meeting third seeded Colton-Pierrepont. C-P edged Edwards-Knox 1-0 in overtime and Chateaugay dropped Morristown 3-0 on Tuesday.

Jordan assisted on two goals by Leah Warren and one by Gabby Richardson as Lisbon took a 3-1 lead and then scored the final two goals off assists from Warren and Richardson.

Cassia Sage scored the lone goal for Parishville-Hopkinton which had advanced to the quarter-finals in a 1-0 overtime win over Hermon-DeKalb on Saturday.

Warren opened the scoring on a deflection and Richardson netted a pretty shot from far outside the 18 yardline to give Lisbon a 2-0 halftime lead.

In the second half Warren scored early off a pass from Jordan who scored her first goal off a corner kick from Warren. Jordan closed the scoring sniping a shot from the 18 yardline past P-H goalie Kelsey Farnsworth who finished with 13 saves in the face of heavy pressure and uncertain footing the creases.

Grace Smith handled three shots and was sure handed picking up long volleys served in the defensive zone by the Panthers.

BRASHER FALLS - Chateaugay (15-2) punched its ticket to a rematch with Colton-Pierrepont in the Class D semi-finals, with a 3-0 win over Morristown on Tuesday night on the turf field at St. Lawrence Central School.

After a Ryleigh Reardon assisted goal by Angela Dwyer at the 63rd minute, Johnston put the game away 12 minutes later, with a second insurance goal assisted by Grace Jarvis.

Bulldogs head coach Jason LaPlante said, in addition to Johnston, Jarvis was a key stand out in his teams’ win.

“She was everywhere, she distributed everywhere in that midfeld,” he said. “She was excellent.”

Morristown finished with a 5-10-3 record under Coach Hannah Thornhill but competed well in the deep talent pool of the NAC West.

Chateaugay, which tied the season series 1-1 against Colton, will face the Colts in the next round of the Class D playoffs on Thursday at 5 p.m., in Potsdam.

In the two teams’ last meeting Colton-Pierrepont avenged an early-season 4-3 loss to the Bulldogs with a 3-0 victory on the road.

SOUTH COLTON — Freshman Kaitlyn Houston converted on a penalty kick five minutes into overtime to lift the Colton-Pierrepont Central to a 1-0 win past a determined upset bid byEdwards-Knox Central.

The Lady Colts (14-1-2) will now get set to take on NAC East rival Chateaugay in the semifinals Thursday at the Potsdam Central turf field starting at 5 p.m.

Freshman Kendall LaMora made six saves backstopping the shutout over E-K while Sophia Vachev anchored the Cougars’ cause stopping 15 shots.