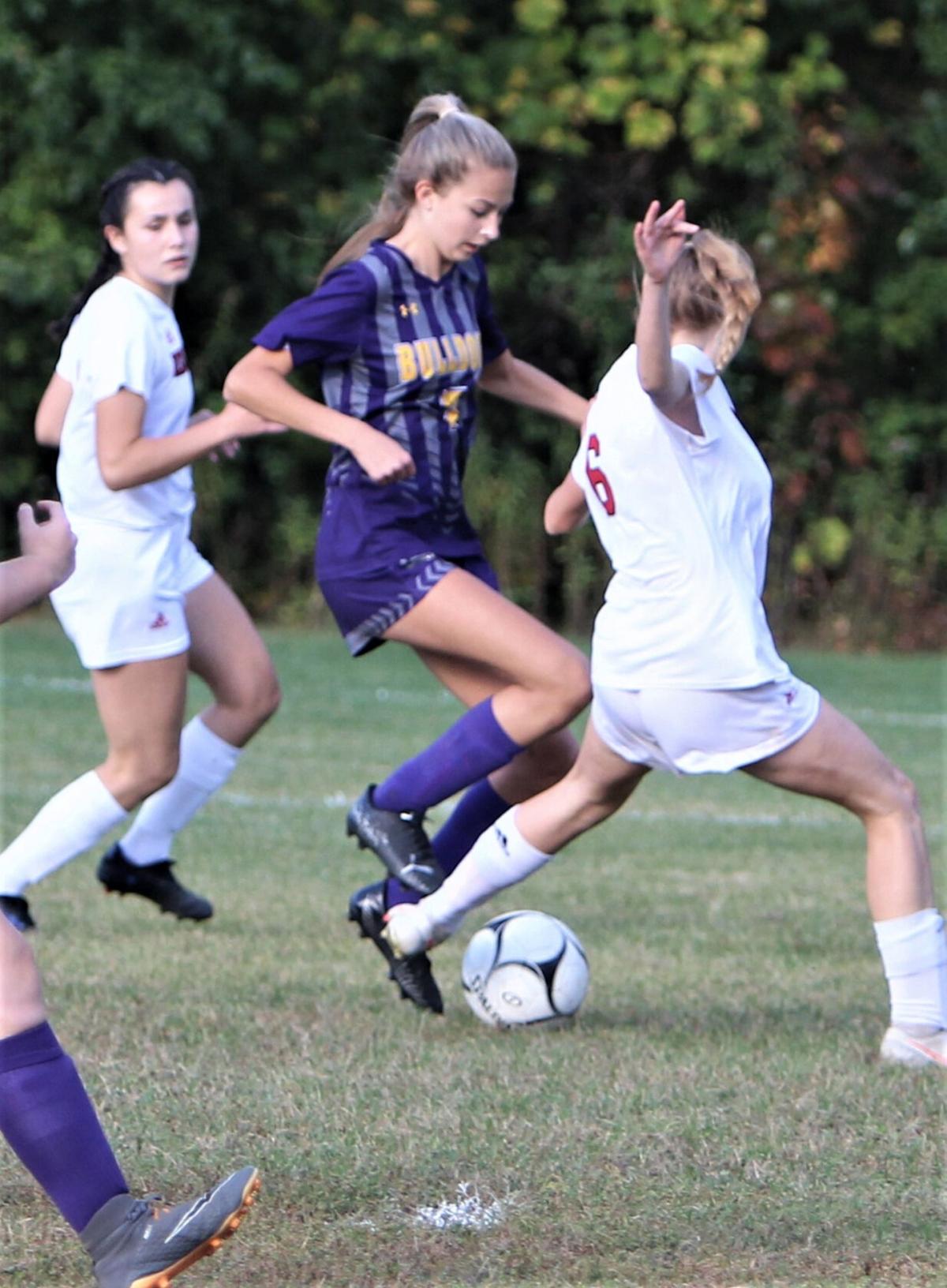 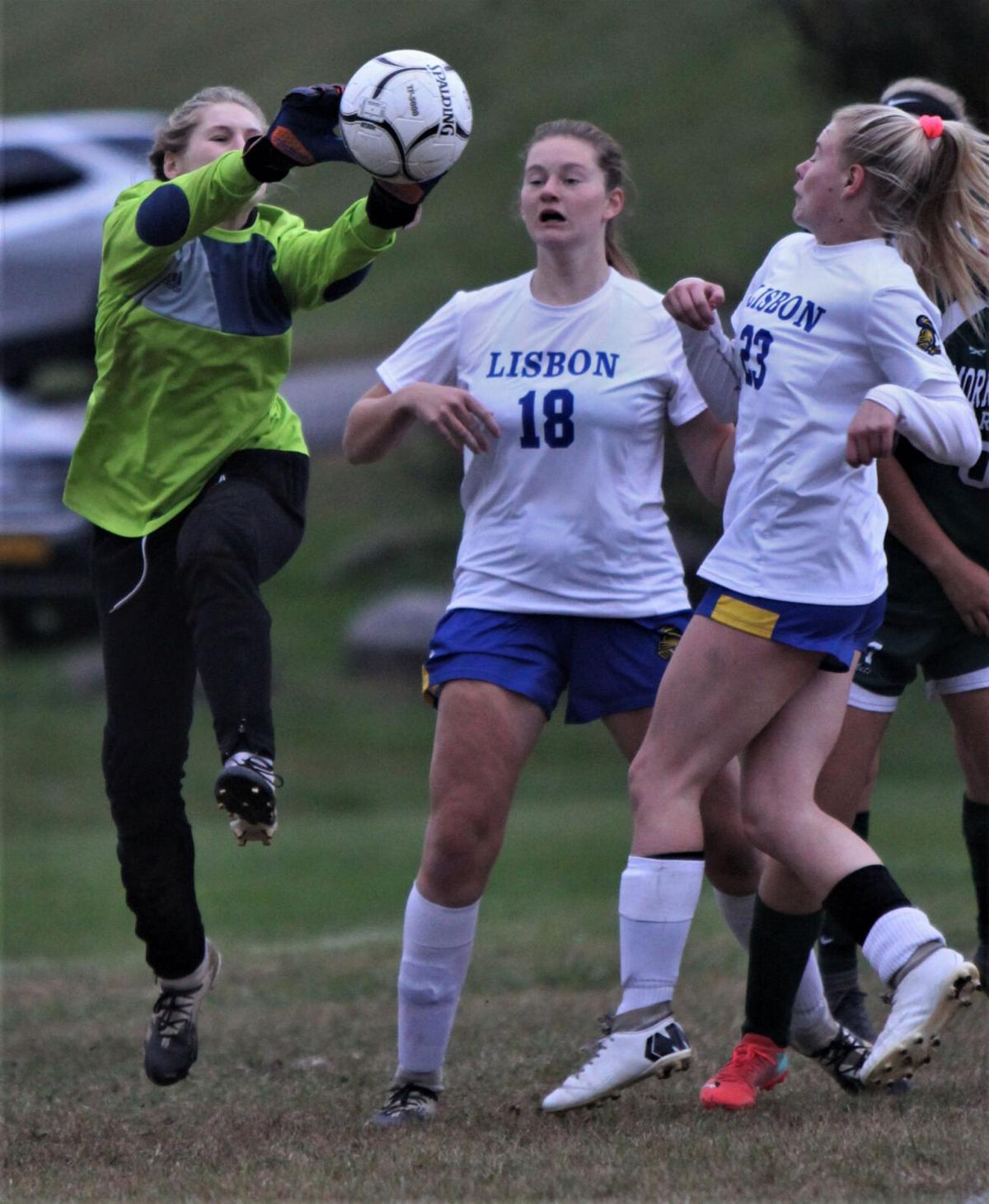 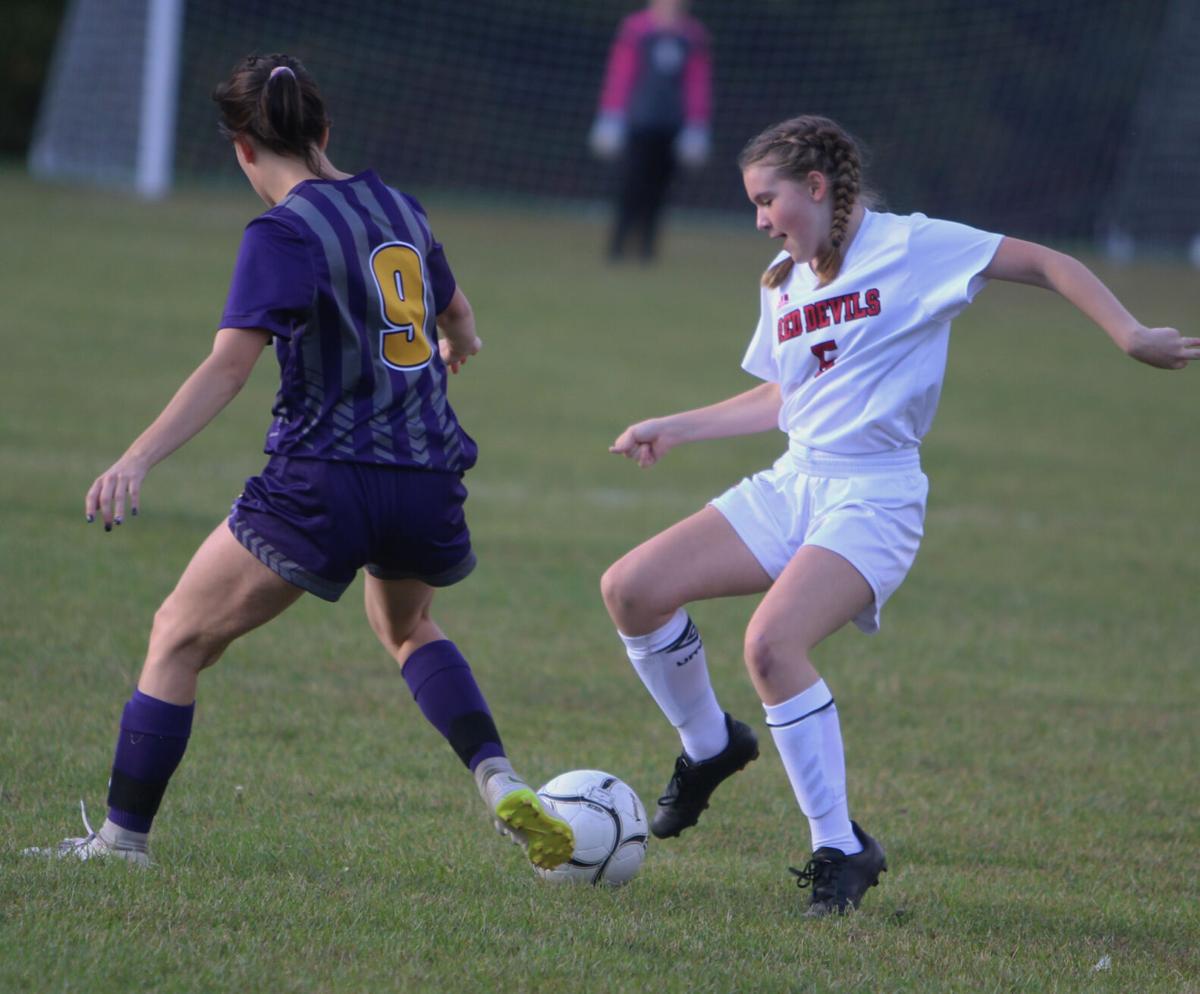 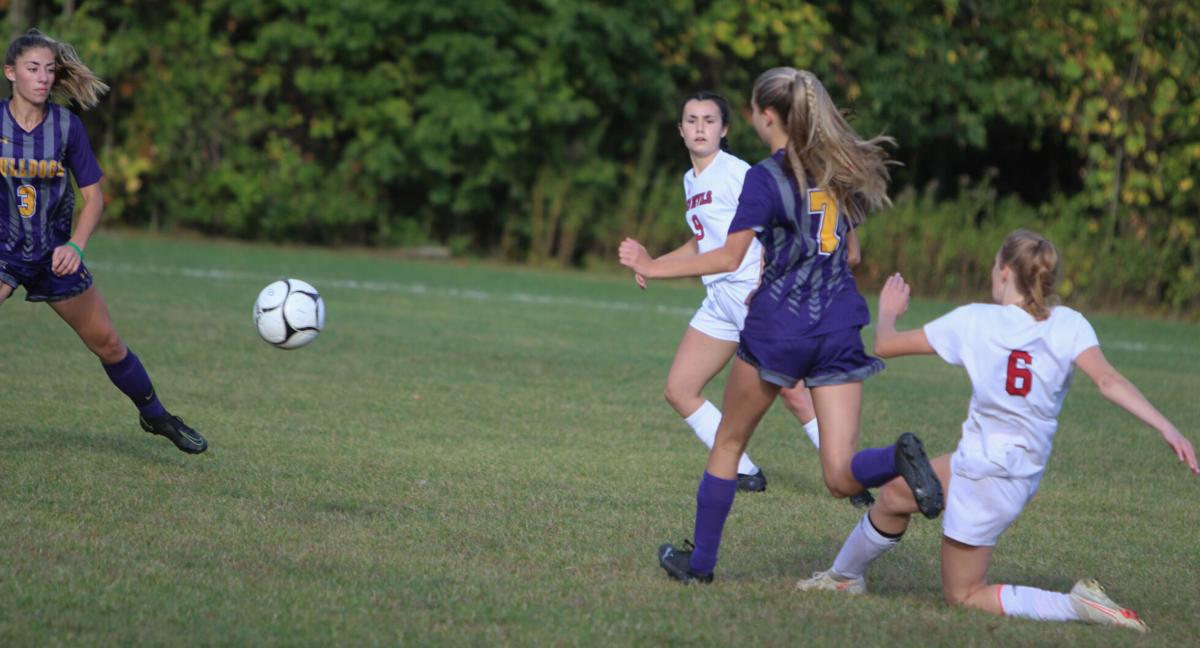 Lisbon, Heuvelton and Hammond all scored wins on Monday as the Golden Knights maintained an undefeated run at 8-0-0 in the NAC West Girls Soccer race.

Lisbon 3 - Morristown 1: Ava Murphy scored off a lead pass from Leah Warren just 20 seconds before the half to spark the Knights’ comeback against the Rockets who took a 1-0 lead as Emilee O’Donnell scored from Kylie O’Donnell.

Emily Jordan scored twice in the second half for Lisbon off assists from Rachel LaRock and Julia Rishe. Grace Smith backstopped the win for Lisbon and Emma Showers stood tall in net for Morristown.

“We are learning in our last two games that great teams are forged from adversity. This is the second game in a row getting down 1-0 and we’ve made corrections and dug deep to find a way to win,” said Lisbon Coach Courtney LaBeau.

“Ava Murphy broke loose with a pass from Leah Warren just before halftime to tie the game and with adjustments and hard play we were able to play our game and open Emily Jordan up for two great goals assisted by Rachel LaRock and Julia Rishe in the second half. Hannah Thornhill made some great adjustments from last week’s game and Emma Showers played great in goal.”

Heuvelton 5 - Harrisville 0: Rylin McAllister scored three goals, Dakota Mouthorp delivered one goal and three assists and Katie Cunningham came through with one goal and one assist in a strong two-way effort against the Pirates. Leanne Dietschweiler handled three saves to record the shutout.

Hammond 3 - E-K 2: The Red Devils scored three goals in the second half to prevail in a high octane matchup with the Cougars who took a 1-0 halftime lead on a goal by Camryn Huckle. The Devils surged into the lead as Landree Kenyon scored from Ava Howie and Hailey Manning scored unassisted. E-K countered with a Lily Lottie marker with 13:09 remaining and sweeper Zoey Cunningham scored her first varsity goal on a corner kick to break the 2-2 tie with 3:09 to play.

Alyvia Crosby stopped 12 shots to anchor the win and was honored in a Senior Day ceremony along with Lily Towne and Hannah Belknap.

“In the second half our front line stepped up and our defense was solid. I thought we did a better job at moving the ball and Zoey Cunningham got her first varsity goal,” said Hammond Coach Alyssa Crosby.

Undefeated Lisbon opened an eight-point lead in the NAC West Girls Soccer race by downing second place Edwards-Knox 2-1 on Friday. Lisbon came out of the game with a 7-0-0 divisional mark and dropped E-K to 4-4 and upped it with a win over 3-1-0 Morristown on Monday.

Heuvelton 2 - Hammond 0: Forward Katie Cunningham was a fountain of energy for the Bulldogs taking 11 shots on goal and using two crosses from the three yardline to set up second half goals by Dakota Mouthorp and Bella Doyle.

Leanne Dietschweiler made four saves in the shutout and Alyvia Crosby played a strong game for Hammond in the face of 29 shots on goal.

Lisbon 2 - E-K 1: The Cougars issued a challenge to the Knights by taking a 1-0 halftime lead on the strength of a Heidi Moore goal from Erica Benzel 3:44 before the half. Emily Jordan netted a direct kick to pull the Knights even at 1-1 with 22:18 to play and scored the game-winner unassisted with 2:48 to play.

Sophia Vachez stopped 10 shots in goal for E-K and Grace Smith made three saves for Lisbon.

‘It was a great game. All my kids played hard and my goalie did a great job,” said E-K Coach Patty Matthews.

Lisbon 4 - Morristown 0: Lisbon wasted no time jumping on the opportunity for a fast start in Wednesday’s NAC West Girls Soccer game at Morristown. Emily Jordan buried a penalty kick in the second minute of the game and Lisbon struck for three goals in the first 19 minutes and went on to gain a 4-0 victory.

Ava Murphy converted from Leah Warren on the Knights’ second goal Warren scored off a pass from Jordan to create the 3-0 margin.

The Golden Knights broke through against some defensive adjustments by the Rockets and the goaltending excellence of Emma Showers, who counted a penalty shot stop in her 20 saves, when GabbyRichardson scored from close range off a diagonal pass from Jordan with 11:33 remaining in the game.

Grace Smith fielded three shots to post the shutout for the Knights who travel to Edwards-Knox today.

“We continue to be so proud of this group of girls. Our biggest stress is that they work to get better each and every game. With hard work and the right mind set the sky is the limit for this team,” said Lisbon Coach Courtney LaBeau.

C-P 2 - Hammond 0: State ranked Colton-Pierrepont scored in the first minute of the second half and netted an insurance tally with two minutes to play to secure a 2-0 victory over Hammond on Saturday in a game played at Potsdam High School.