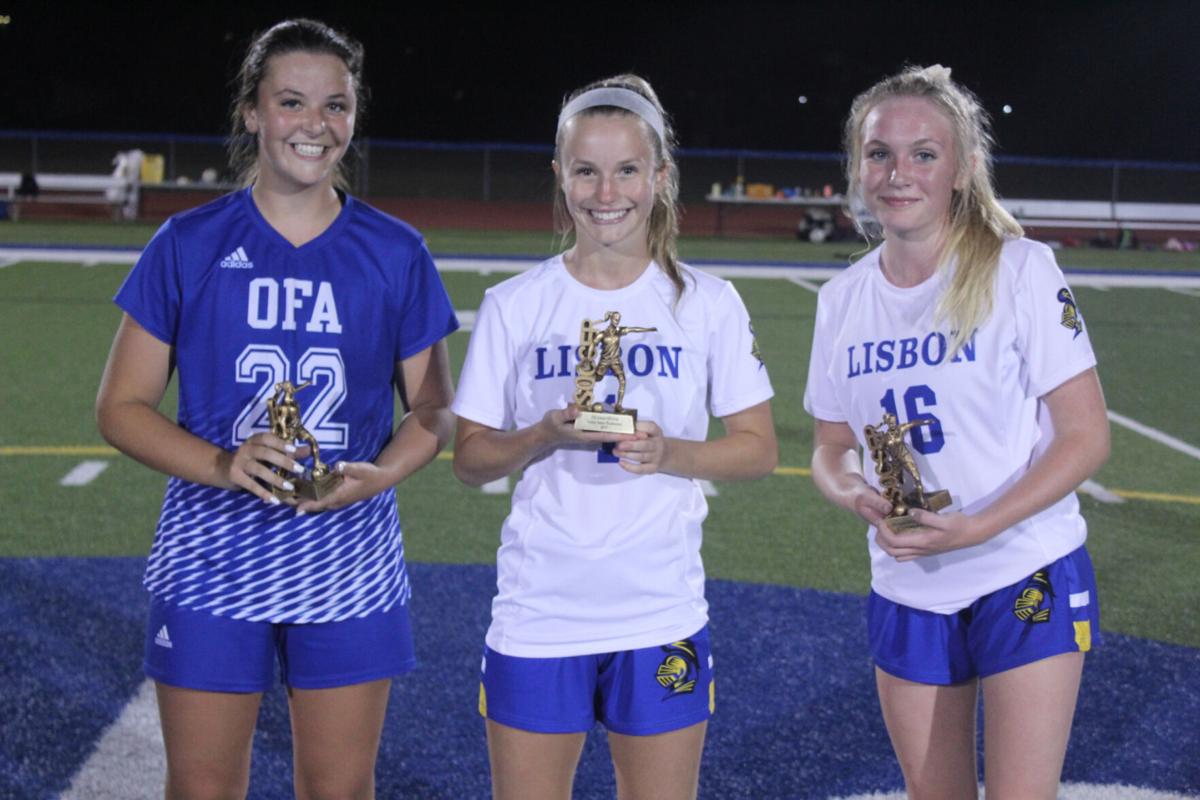 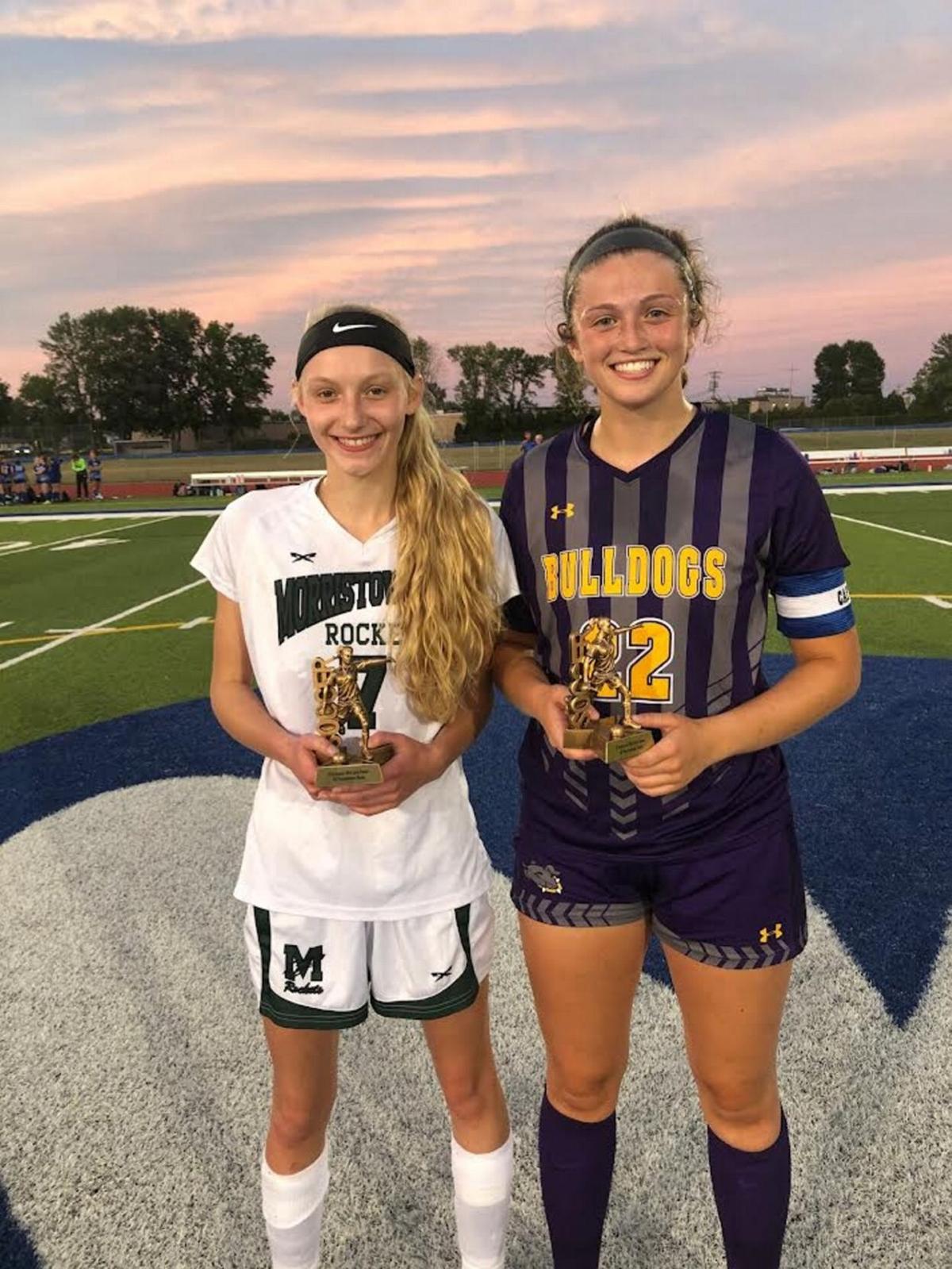 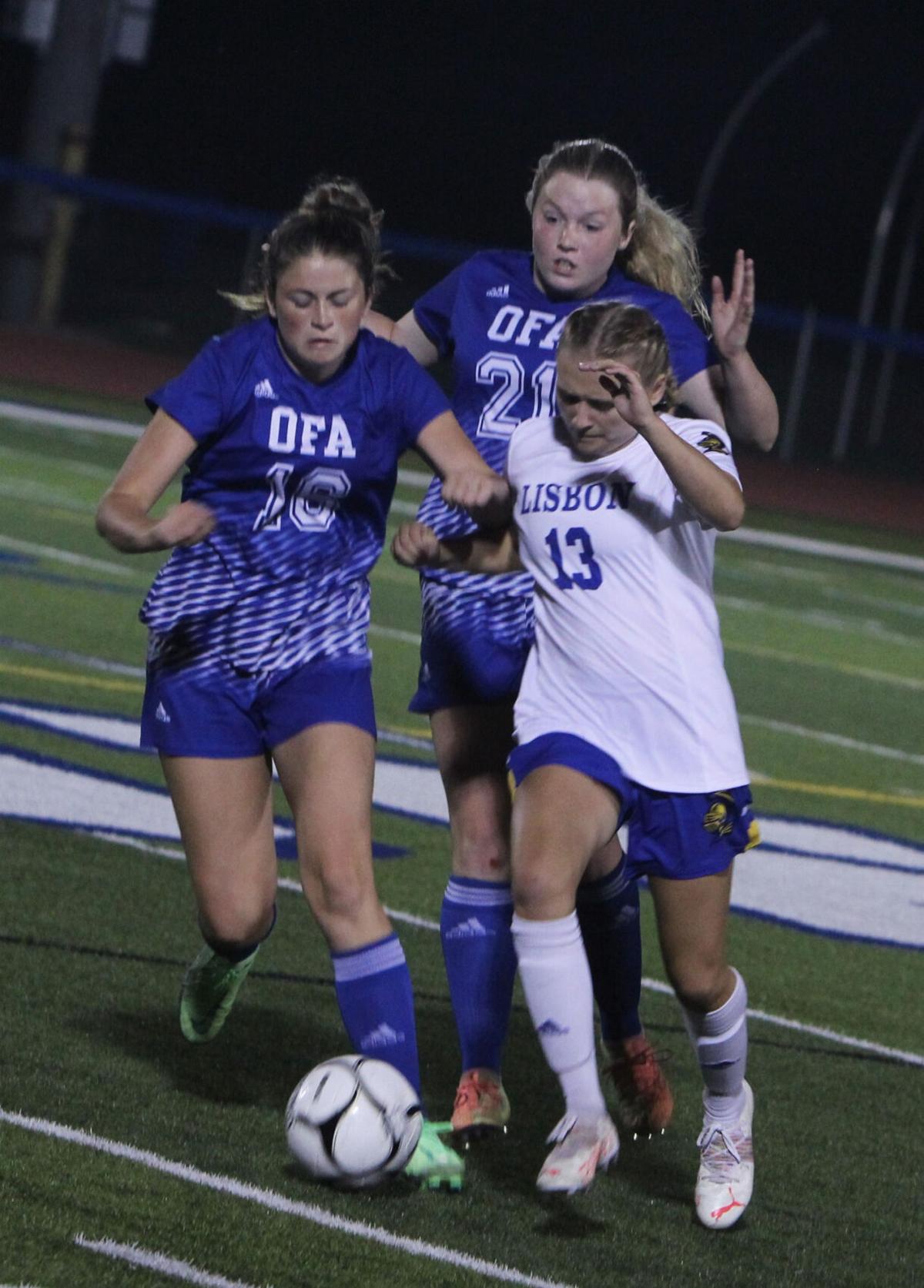 Lisbon’s Leah Warren and OFA’s Abby Guasconi and Kaydence Fraser compete for control of the ball in the championship game of the OFA Tournament on Wednesday. Dave Shea/The Journal 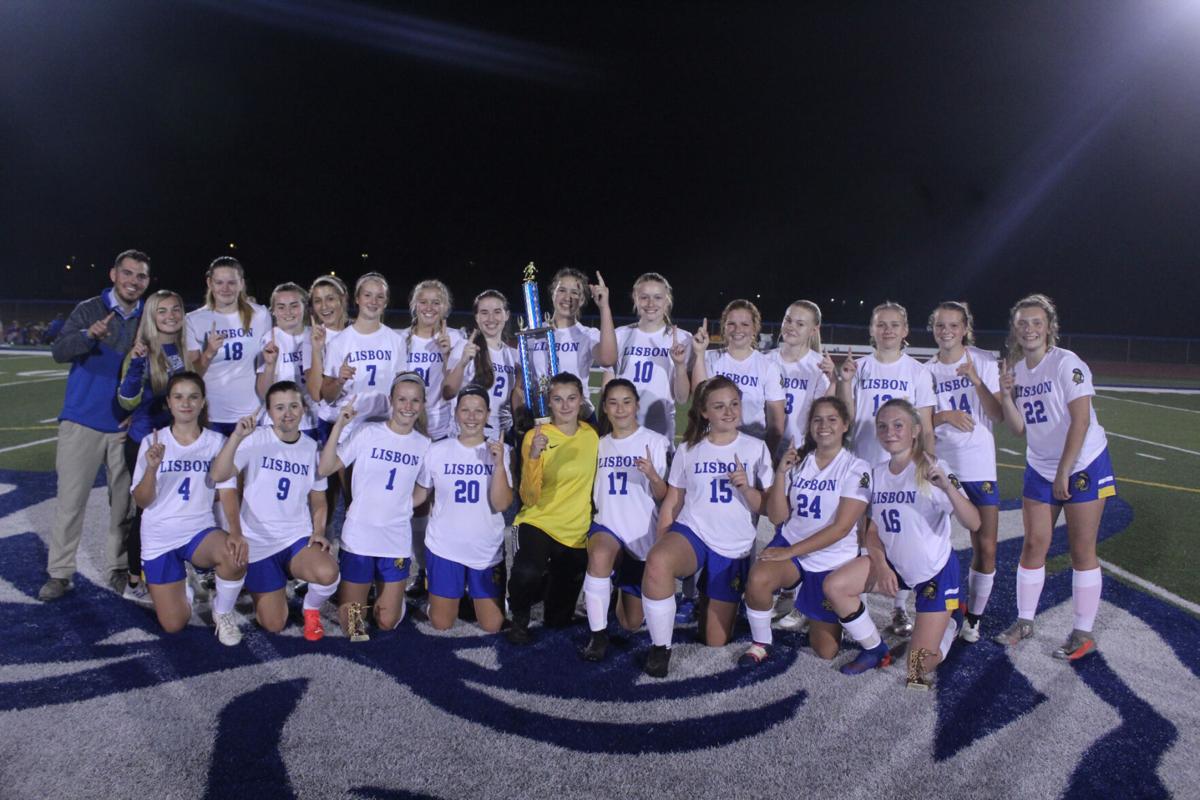 Lisbon’s Leah Warren and OFA’s Abby Guasconi and Kaydence Fraser compete for control of the ball in the championship game of the OFA Tournament on Wednesday. Dave Shea/The Journal

OGDENSBURG — Lisbon rode a flying start past the host Blue Devils to a 3-0 victory and a third straight championship of the OFA Girls Soccer Tournament on Wednesday night after Heuvelton used a second half goal to gain a 1-0 consolation game victory over Morristown.

“We are unbelievably proud of this amazing group of girls. Tonight was a team effort and we made adjustments after yesterday’s win. Teamwork and an offensive mindset in the first half allowed us to grow and develop our whole team in the second. We built our attacks from our strong midfield which freed up our strikers allowing Emily Jordan to score two,” said Lisbon Coach Courtney LeBeau.

“Rachel LaRock’s toughness allowed her the space to net our third. OFA puts on a great tournament and we are thankful to be invited back year after year.”

Jordan scored the first two goals of the game.

On the first she took a cross from Leah Warren and drilled a hard shot past OFA goalie Olivia Merrill who made a point blank save two minutes earlier. In the second tally Jordan worked herself free along the right baseline rifled a sharp angle shot just inside the left post.

LaRock pressed forward from her halfback post and scored the third goal in a scramble with the Knights in an all-out attack mode with the first half winding down. Grace Smith stopped eight shots in the shutout and Olivia Merrill finished with 10 saves for OFA.

Heuvelton 1 - Morristown 0: DaKota Mouthorp scored with 18:10 remaining in the game for the Bulldogs who posted a 26-4 shots at goal advantage and Leanne Dietchwelier stopped three shots to post a shutout in her first start.

“The Heuvelton girls played very hard again tonight. We had 26 shots on goal and finally connected on one in the second half on a well-placed shot by DaKota Mouthorp assisted by Katie Cunningham. Bella Doyle kept nice control distributing the ball well from the midfield. Lily Spooner at left fullback did an outstanding job playing the back position. Leanne Dietschweiler made nice saves in her first night as goal keeper,” said Heuvelton Coach Denise Curry.

Rylin McAllister made some excellent speedy runs in the left striker position. We will be looking to finishing our shots in practice.”

Carley Piercey sparked some late scoring threats for the Rockets who will play their third game and three days facing Edwards-Knox at Colton-Pierrepont today.

“Playing three days in a row is tough. We need a practice right now to work on some things from our first two games. But we will get there,” said Morristown Coach Hannah Thornhill.

P-H 2 - Potsdam 1: Avery Zenger scored two goals to lead Parishville-Hopkinton past Potsdam in a Jeffers Tournament semifinal at Potsdam High School. It was the opener for both teams.

Alexander Baxter scored on a corner kick for the Sandstoners.