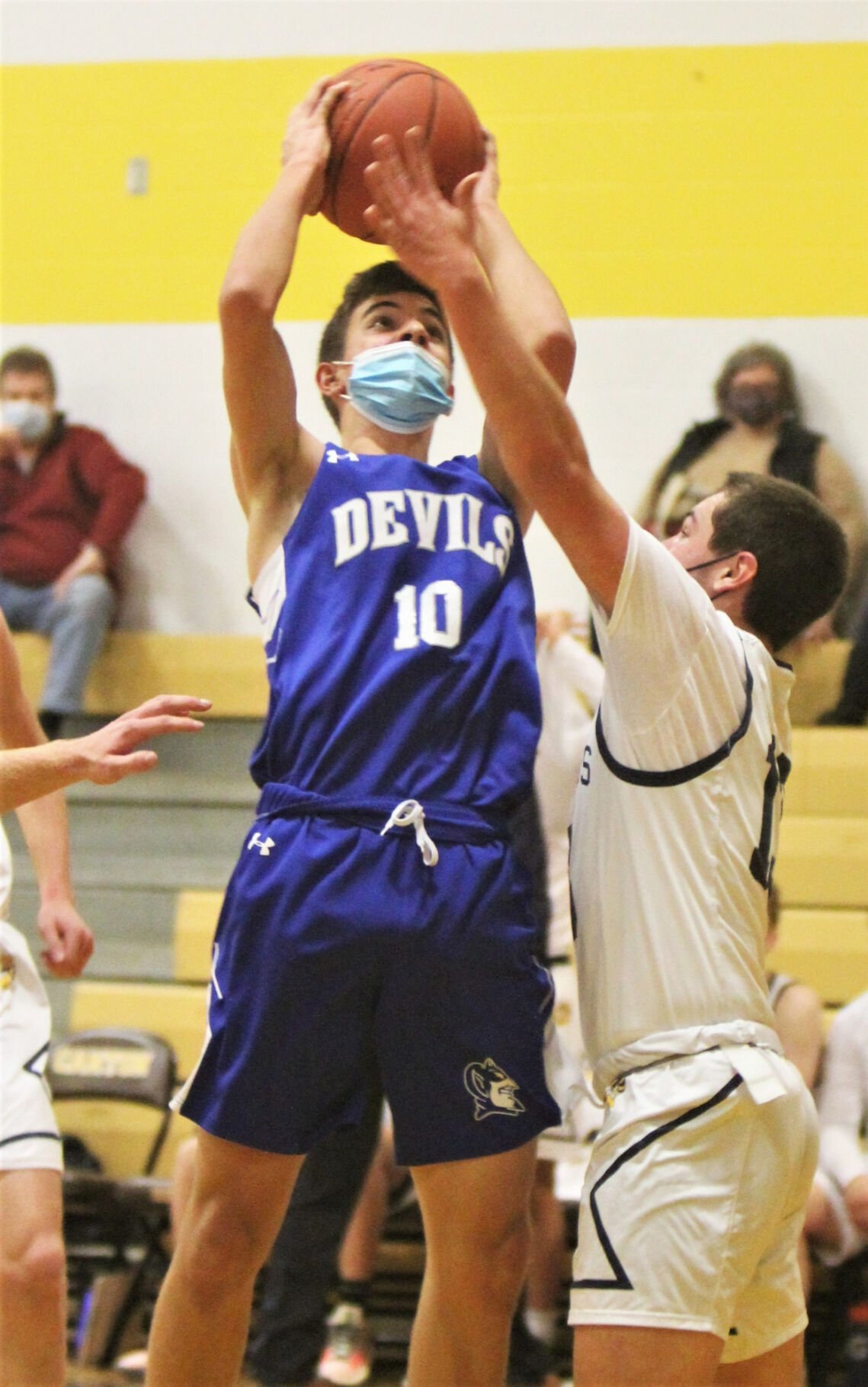 OFA’s Alex Mitchell takes a jump shot against Donnie Cordova of M-W in action from the Burkman Classic in Canton. Dave Shea/The Journal. 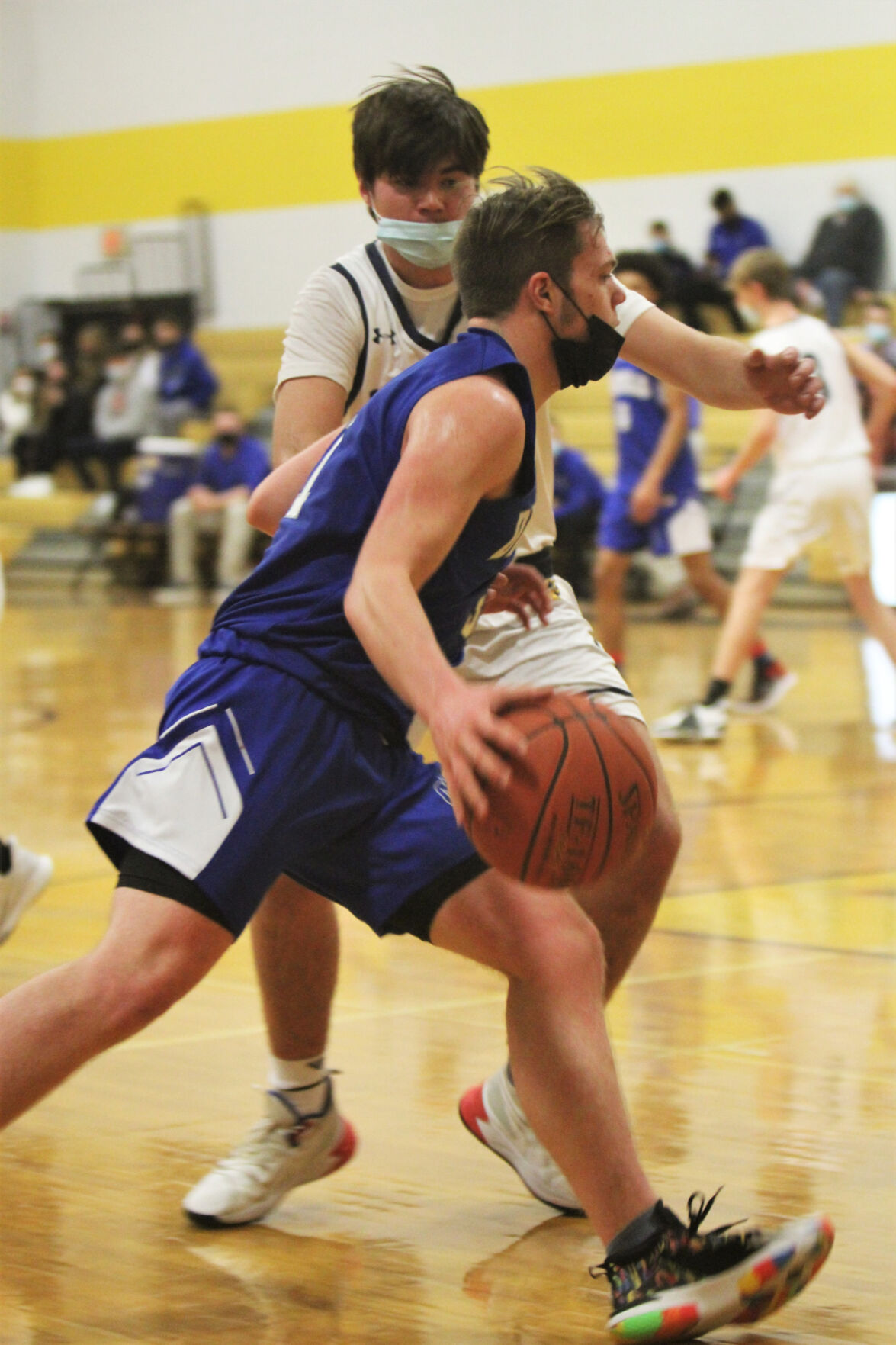 OFA’s Alex Mitchell takes a jump shot against Donnie Cordova of M-W in action from the Burkman Classic in Canton. Dave Shea/The Journal.

CANTON - The championship game of the 2021 Burkman Classic will feature a unique father vs son situation tonight as Madrid-Waddington meets host Canton.

The contest was set up on Monday as M-W downed OFA 55-46 and Canton pulled away from Edwards-Knox 66-36.

The title game will see M-W Coach Aaron Jones guiding his Jackets against the Bears who feature his son, Ryan Jones, in the starting backcourt. Growing up Ryan Jones sat on the M-W bench with his dad and his grandfather Denny Jones who serves as an assist coach.

Troy Peck (6 points) buried a pair of 3-pointers and Drew Harmer converted a 3-point play as M-W expanded a 29-23 halftime lead to 43-27 in the third quarter. OFA’s Justice McIntyre, who scored a game-high 23 points, buried a three-pointer to start the first of two Blue Devil comebacks which eventually cut a 53-36 deficit to 55-46 in the closing seconds.

“We missed a lot of close range shots but Drew Harmer and Jacob Morgan played very well inside which was big for us,” said M-W Coach Aaron Jones.

Kaden Kingston scored six of his seven points in the third period and Donnie Cordova also scored seven points with five assists and four steals. Luke LaPage and Jack Bailey each added two points to round out the scoring.

McIntyre buried two threes and a series of floating conversions in heavy traffic down the lane to score at least five points in every quarter on his way to a game-high 21 points for OFA (2-4).

Rounding out the OFA scoring were: Shea Polniak with a 3-pointer and Alex Worden and Ryan Mitchell with two points apiece.

BEEKMANTOWN — Host Beekmantown fashioned an 18-9 first quarter lead and added on to it in every quarter to gain a 63-38 nonleague boys basketball victory over OFA last Wednesday night.

The Devils were operating with a restructured lineup and JV call-up Andrew Loffler led the team’s scoring with 13 points.

“The effort was there. It is a learning process,” said OFA Coach DaKota Brady after his team dropped to 2-3 on the season.

The OFA JVs were outscored by Beekmantown 58-53 in an entertaining contest where the host Eagles scored 20 points in the fourth quarter. Miquel Herrera led the winners with 21 points while Madden West paced the OFA scoring with a season-high 20 points.