OFA’s Abby Raven challenges an inside shot by Brianna Stratton of N-N in Thursday’s opening round action from the Ben Cordwell Memorial Tournament. Dave Shea/The Journal 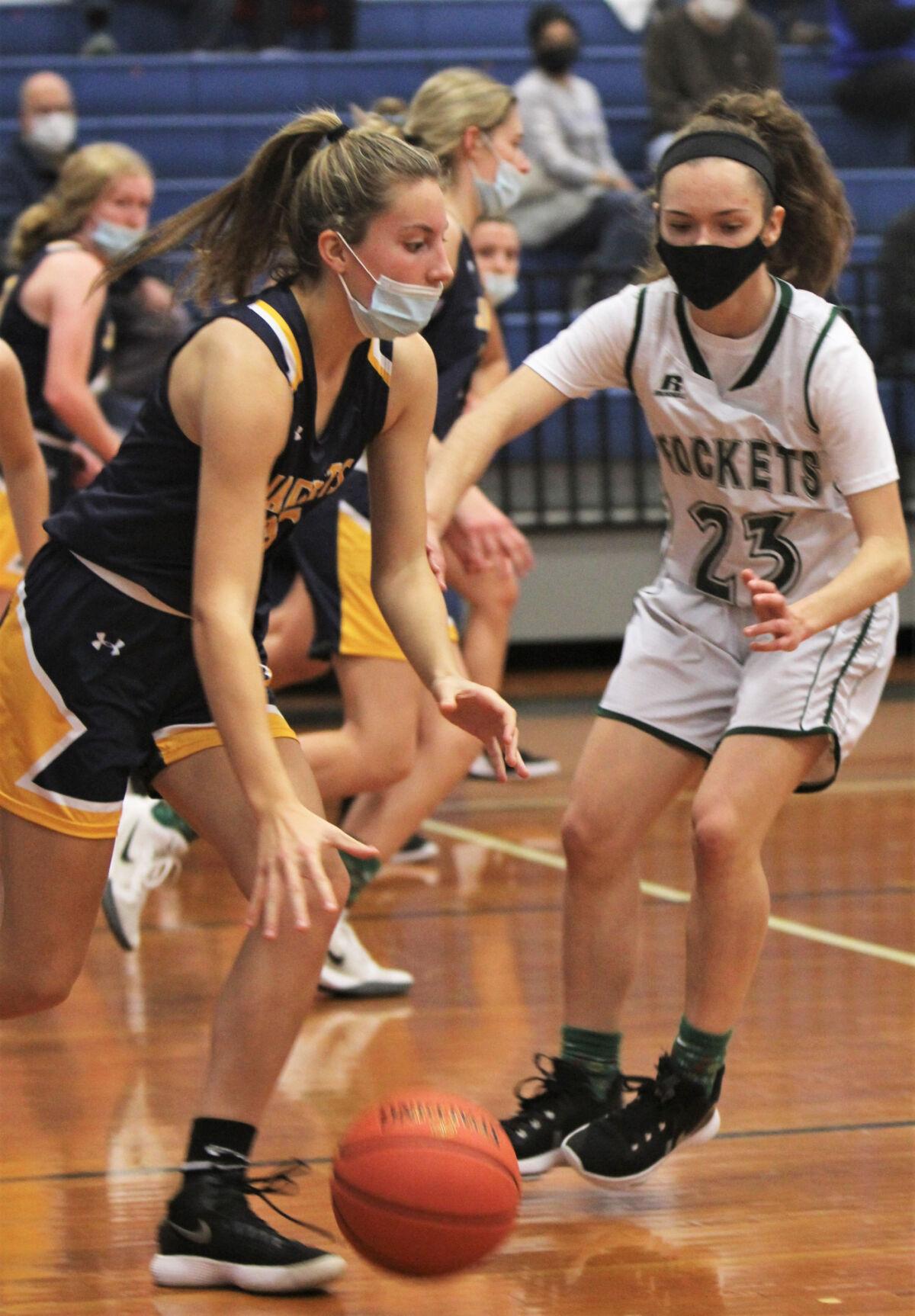 OFA’s Abby Raven challenges an inside shot by Brianna Stratton of N-N in Thursday’s opening round action from the Ben Cordwell Memorial Tournament. Dave Shea/The Journal

In the opening game Madrid-Waddington used its fast break and quick ball movement to race out to a 24-1 first quarter lead and downed Morristown 50-10. In the nightcap N-N used four 3-pointers in the second quarter to tip the balance of a physical defensive matchup 44-37.

“It will be a tough game with Madrid-Waddington but I am glad we are playing them,” said N-N Coach Jason Gallant of the title game meeting between two NAC East rivals.

“Tonight we hit the shots we needed to make and we made three in a row in that one stretch.

M-W 50 - Morristown 10: Hailey Marcellus delivered eighth points from the low post in the first quarter where seven different Jackets (6-1) scored. She went to score 20 of her 22 points in the first half and guards Lily LaMere and Grace Plumley orchestrated the transition and scored 10 and eight points. Lane Ruddy netted four points and Lacy Sullivan, Laney Tiernan and Natalia Pearson all scored two points.

“We got out to a mast start and moved the ball well,” said M-W Coach Bryan Harmer.

N-N 44 - OFA 37: Caryn Perretta connected for two three-pointers in the second quarter and KJ Belmore and Caramia Carista each struck once from behind the arch sparking the Flyers (4-2) who opened a 34-25 lead.

Abby Raven and Olivia Merrill connected inside and the Devils (1-2) closed the gap to 34-29 but they could pull no closer as Kylee Kellsion delivered timely baskets and assists teaming with Brianna Stratton for a pair of 11-point efforts.

Belmore and Perretta combined for nine and eight points and Carista added three.

Raven dropped in eight points in the first quarter and finished with a game-high 20 points with nine assists. Merrill tallied six points while grabbing 15 rebounds, blocking six shots and passing out three assists.

“They were able to hit the shots and that was the difference.”

Keisa Burns and Maddie Carista combined for 14 and 10 points to lead the Flyers and Julia Kelso and Marissa Lovely each scored six for OFA, Taylor Pinkerton scored four points in the first two minutes but was lost for the rest of the game with an ankle injury.

Emma Manson scored six of her 19 points in the fourth quarter for M-W and Zara Cordwell tallied 14 points. Ava Bouchey scored 12 second quarter points for Lisbon and went on to finish with 19. Leah Warren netted six for the Knights.

Canton bounced back from its first loss in the Central Division and E-K posted its second NAC West Division win.

Canton 53 - Malone 37: Amelia Rodee scored eight of her 10 points in the third quarter and Maddie Hoy scored 15 points and Ava Hoy added 14 to lead a balanced Golden Bear (3-1) offense. Raegan McArdle and Liliana-Teresa Sosa both scored 10 for the Huskies (1-4, 1-3).

H-D 35 - E-K 30: Lily Lottie and Rylee Typhair led the Cougars (2-3, 22) with 15 and 12 points against Hermon-DeKalb (0-2). Macy White and tallied six and two points for the Cougars who secured the win by limiting H-D to two points in the fourth quarter.

“We switched to a man-to-man defense in the fourth quarter and it worked well,” said E-K Coach Patty Taylor.