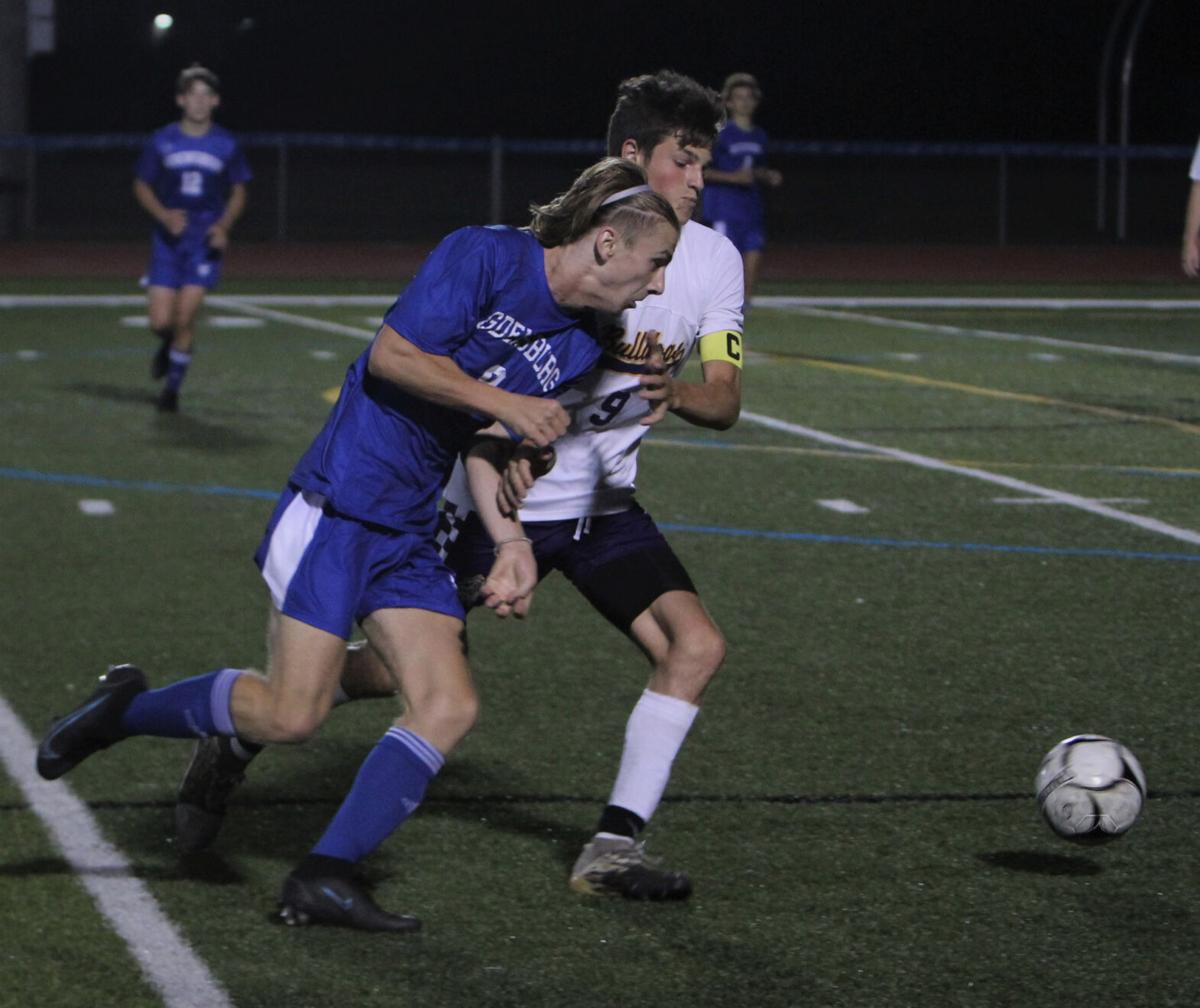 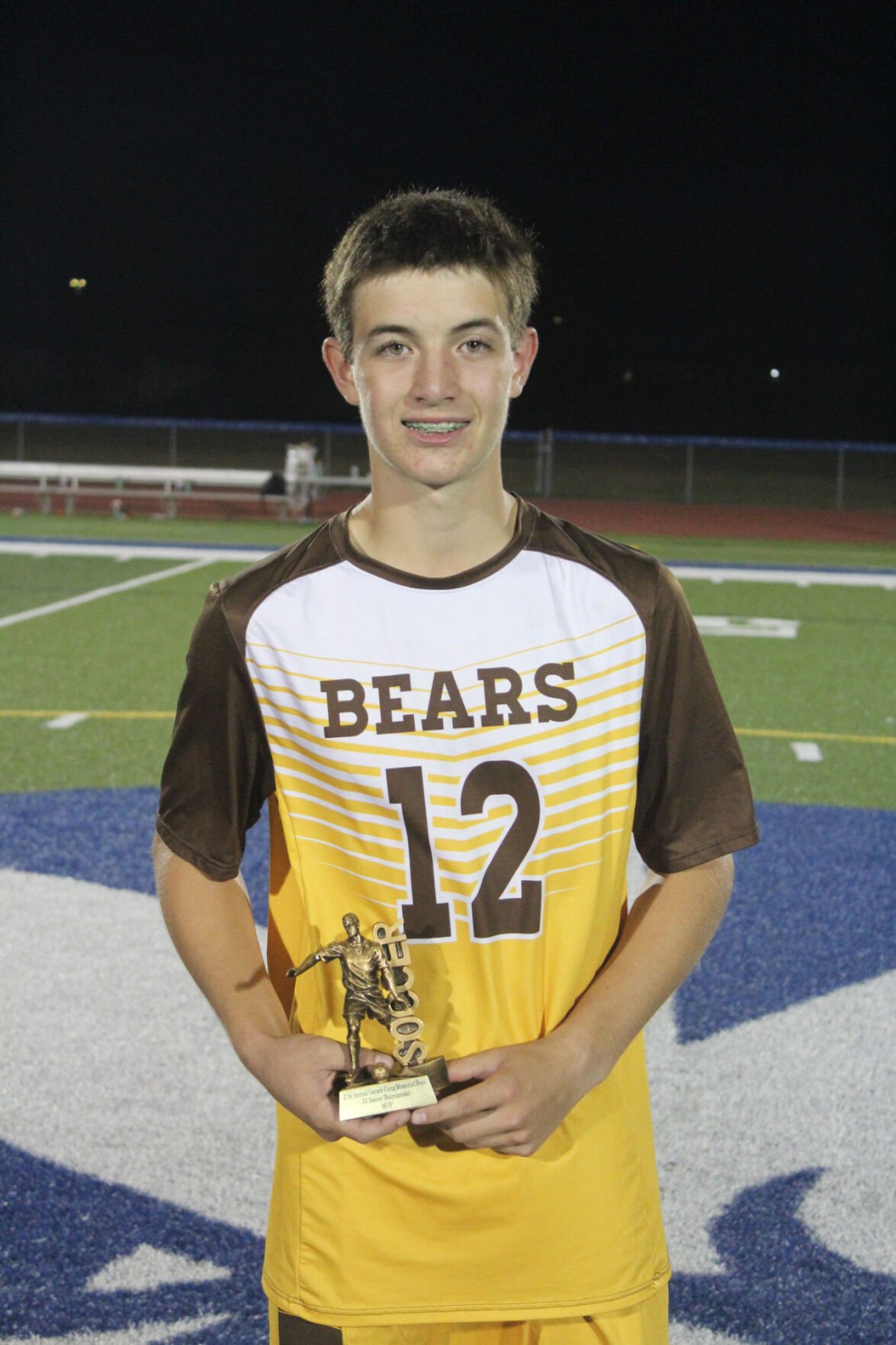 Dan Creurer of Canton was honored as the JV MVP of the OFA Gerry Cring Memorial Tournament. Dave Shea/The Journal 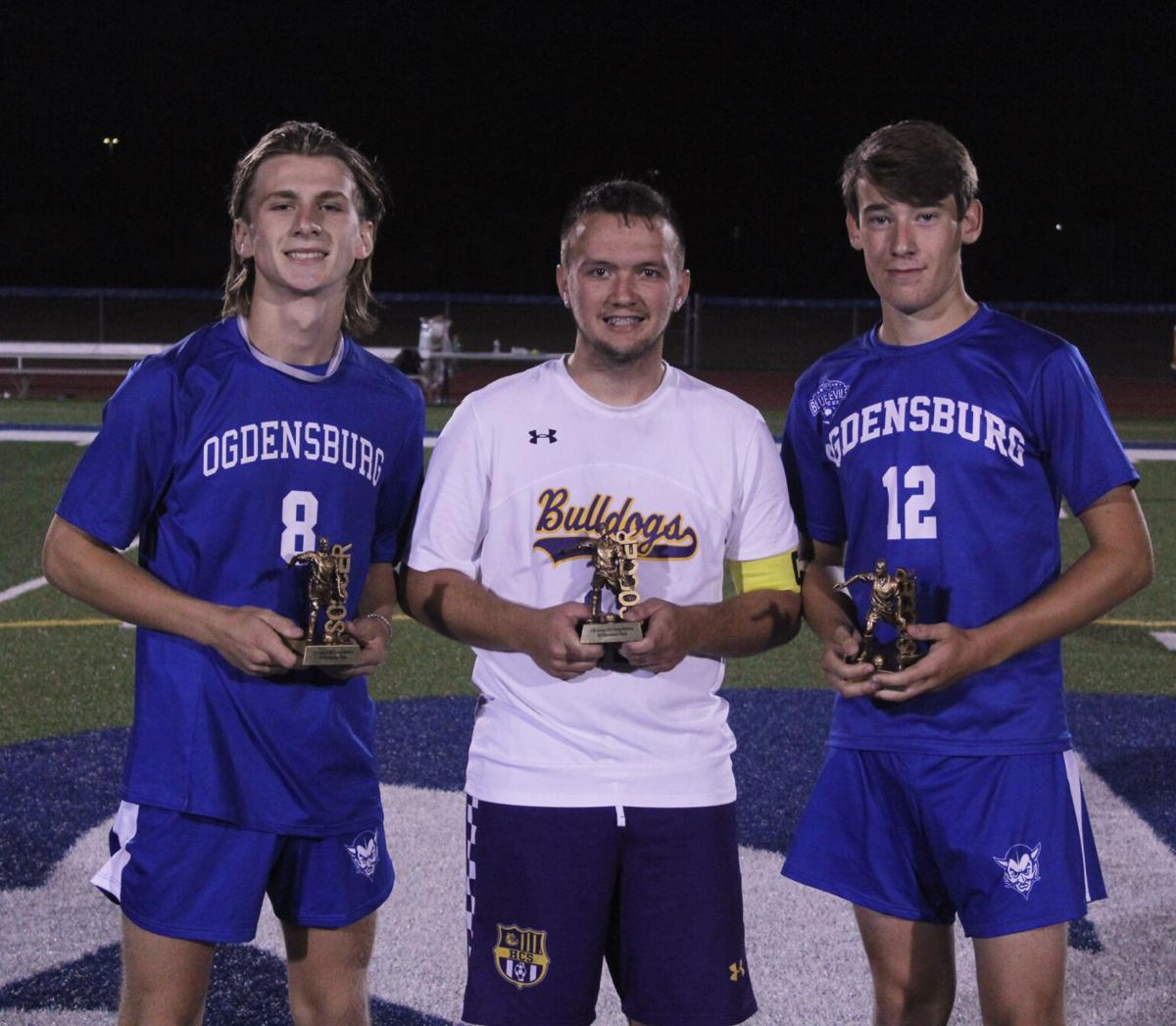 Dan Creurer of Canton was honored as the JV MVP of the OFA Gerry Cring Memorial Tournament. Dave Shea/The Journal

OFA secured a second place finish in its own Gerry Cring Memorial Tournament while Morristown advanced into the championship game of the Colton-Pierrepont Tournament in NAC Boys Soccer action on Friday.

OFA rebounded from a loss to Lisbon to gain a 2-1 win over Heuvelton and Morristown (2-0) shaded Harrisville 2-1 in the first round of the C-P Tournament where the host Colts advanced to the title game with a 9-0 win over St. Regis Falls.

The host Blue Devils were forced to come from behind as Heuvelton scored first in the final game of the Cring Tournament which turned into a three-team affair when Hammond went inactive and merged with Morristown.

OFA went 1-1 in the tournament behind 2-0 Lisbon and Heuvelton finished at 0-2.

The Bulldogs took a 1-0 lead in the 15th minute when Evan Felt converted off a strong cross by Chris Ashlaw.

“We played much better tonight. Our game against Lisbon (3-0 loss) was our first game and we never even had a scrimmage. Lisbon is a great team,” said Heuvelton Coach Bruce Durrant who picked Felt for his team’s All-Tournament Award.

OFA pulled even with 11:30 remaining in the half when Alex Mitchell controlled the ball near the left corner and cross it back near the right post where Trent Lovely tucked it into the open corner.

Franklin Beach delivered the winning goal with 28.50 remaining in the game freeing himself off the dribble for a low shot just inside the right goalpost outside the reach goaltender Jed Crayford who finished with 10 saves. Beach was named to the All-Tournament Team along with Holden Woods.

Crayford kept his team in the league with two point saves in the final minutes and the Bulldogs used some last ditch efforts to pressure the OFA defense.

“We played better tonight and it will be a work in progress for us. We have some young players who don’t have much varsity experience especially on defense. Franklin Beach made a great play on the winning goal,” said OFA Coach Matt Morley.

“We worked on some things in practice and we did a much better job with our positioning and spacing.”

The OFA JVs played two overtime games in the tournament downing Carthage 3-2 and then being shaded 2-1 by Canton in the championship game. Brooks Garvey played very well in goal in both games for Coach Justin Fishel’s 22-man team.

“Playing in two overtime games was very good for our team. Syrus Gladle did a great job pressuing the defense playing on top. We played well and a took a very good Canton team to overtime,” Coach Fishel.

Gladle, Jacob Chapman and Tyler Sovie scored against Carthage and Chapman scored the OFA goal against Canton off and assist from Tyler Sovie.

Canton defender Dan Creurer was recognized as the Most Valuable Player of the tournament.

MCS 2 - Harrisville 1: Cooper Bennett scored from Jarred Young in the 78th minute to lift the Green Rockets (2-0, 1-0) past Harrisville in an NAC West game..

Connor Mantle scored the game’s first goal for the Pirates (0-1). Tristin Simmons tied the game with a goal in the 64th minute for MCS which outshot the Pirates 21-10.

Nolan Sullivan posted 10 saves for Harrisville and Payton Donnelly handled eight saves in his first varsity game in goal for the Rockets.

“It was a good win against a well-rounded team, we had to grind for sure. Defensively we were strong across the ball and the young Donnelly boy played a solid net tonight,” said Morristown Coach Glenn Colby.

“Jarred Young, Tristin Simmons and Cooper Bennett had some good looks and worked well across the board and Joe Wrobel was a rock on defense. Overall good effort from the whole team, each day they are learning to play a little a little better together and tomorrow brings another challenge.”

C-P 9 - St. Regis 0: Cody Francis, Oliver Johnson and Ty Farns all scored two goals to send the Colts past St. Regis Falls (0-1) in their own tourney.

In another nonleague game, host Northeastern Clinton shut out Malone, 7-0, dropping the Huskies to 0-2.