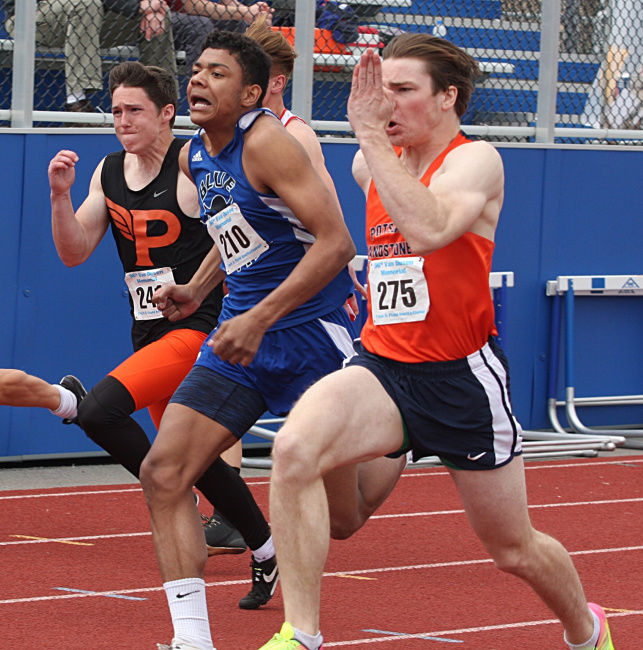 OGDENSBURG — The team and individual dimension of track and field was celebrated with equal fervor Saturday during the 96th Van Dusen Memorial Track and Field Invitational at Ogdensburg Free Academy.

“The guys were extremely excited to defend their championship and we had a lot of top performers today,” Saranac coach Cy Ellsworth said after his Red Storm pulled away from runner-up Potsdam, 235-157.50.

“For me it like going back to the good old days to come back Ogdensburg and compete in the Van Dusen,” Ellsworth added.

The Red Storm’s depth was shown in first-place finishes in the 3,200- and 1,600-meter relays, and they gained other wins from Peter Fogarty in the 3,000 steeplechase, Nick Kelting in the 400 dash and Pat Alberga in the shot put.

“To win this meet two years in a row is just amazing and for me ... it’s so great to see Potsdam enjoying great years in both girls and boys track and field,” Potsdam coach April Barnes said.

The Sandstoners responded led by Sophia Janoyan, who shared as the Outstanding Female Jumper with Plattsburgh’s Angie Lyons after winning the long jump and taking second in the triple jump.

In two close finishes, Lyons took second in the triple jump and second in the long jump. Both jumpers logged top-three finishes in the 100 and 200 dashes.

Potsdam’s only other first- place finisher was Luca Pecora in the 400 hurdles, but the Sandstoners harvested a host of top-three efforts.

The Outstanding Male Sprinter Award was shared by Massena’s Jeremiah Van Borstel, who led the 110 and 400 hurdles, and Potsdam’s Mike Corbitt, who led the 100 dash, took second in the 200 dash and ran on the Sandstoners’ 400 third-place relay.

LaFlair called the thrower award special because his father, Dr. Chris LaFlair, also won it as a Blue Devil and has served as a track mentor, guiding throwers for many years.

“It was all about my dad’s help. He has been coaching me since I was a kid,” Luc LaFlair said. “It would have been great to win both events, but it was great competition for me throwing against the Saranac Lake guys.”

Dinneen, who enjoyed a triple medalist day as a freshman, felt that excelling at the VanDusen was major test for her high level aspirations.

“This meet gave me a great opportunity to see where I stand with my season goals. I want to set our school records in the 1500, 800 and 400, and I already have the 800 record,” Dinneen said.