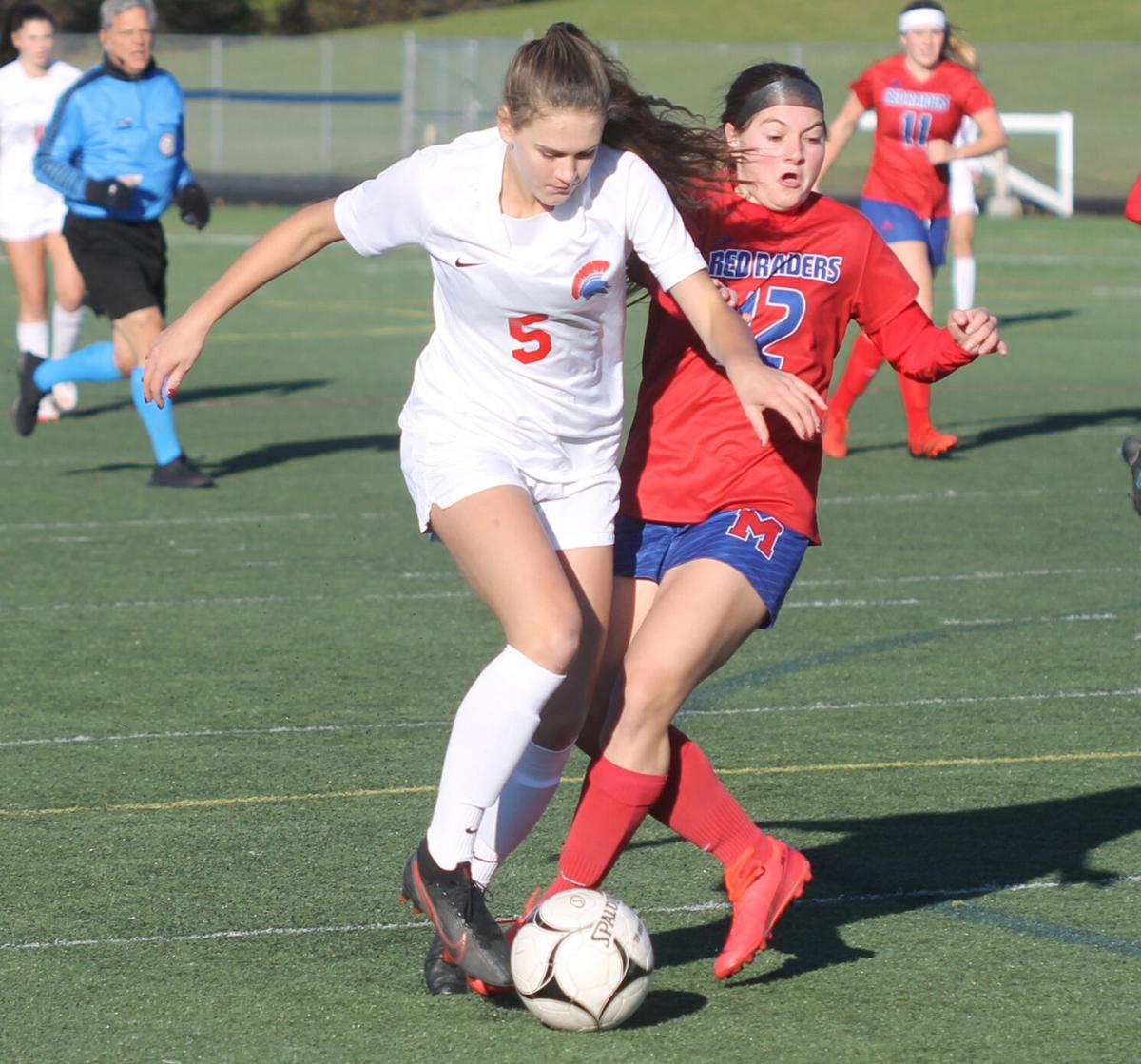 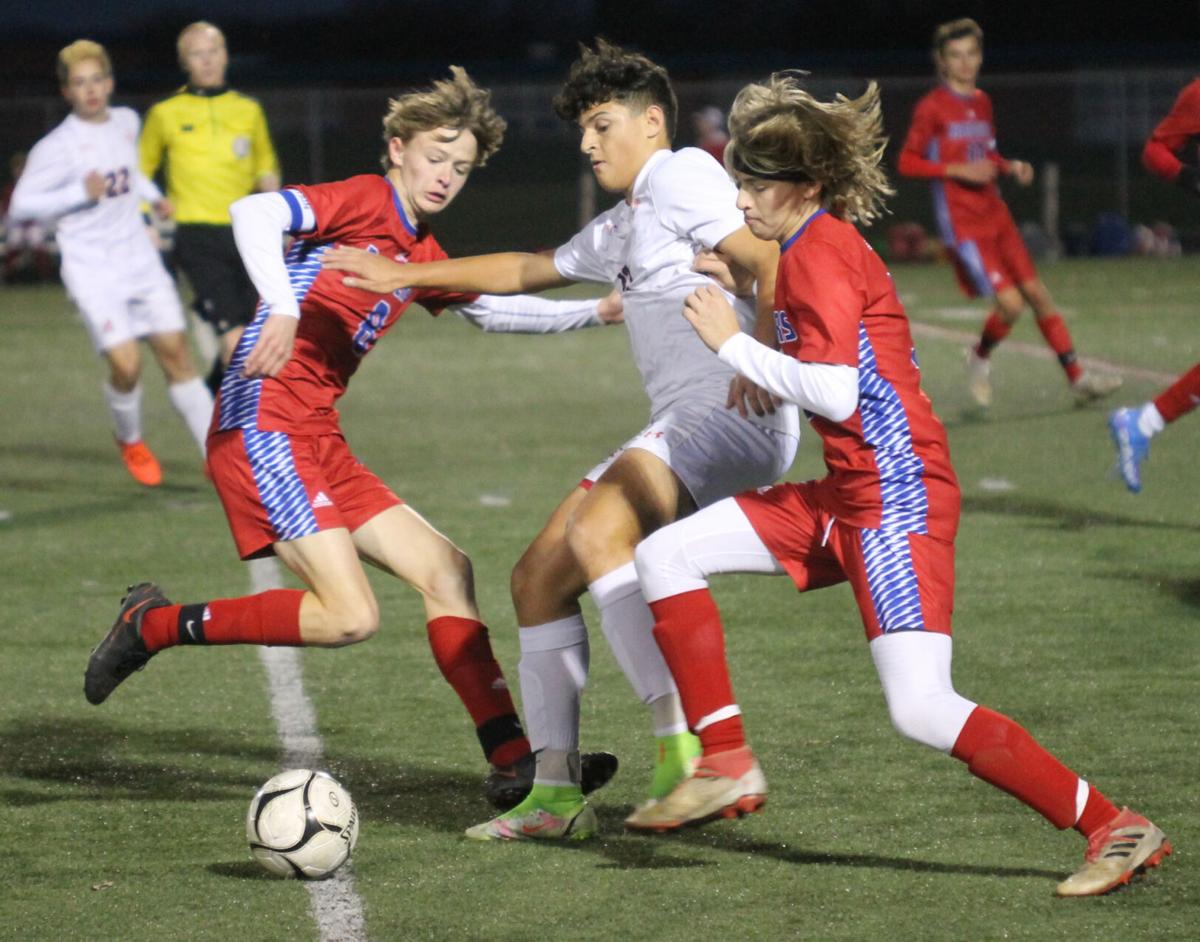 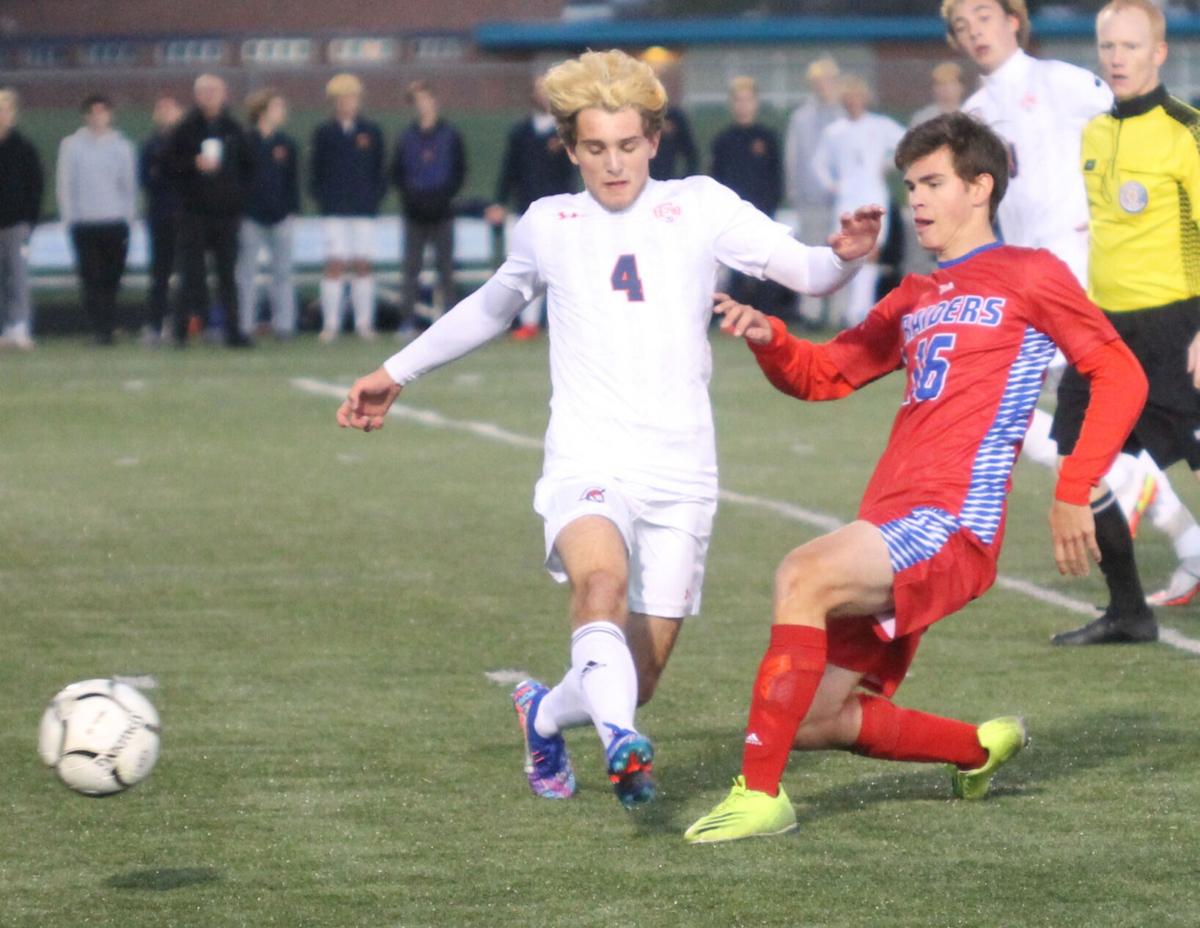 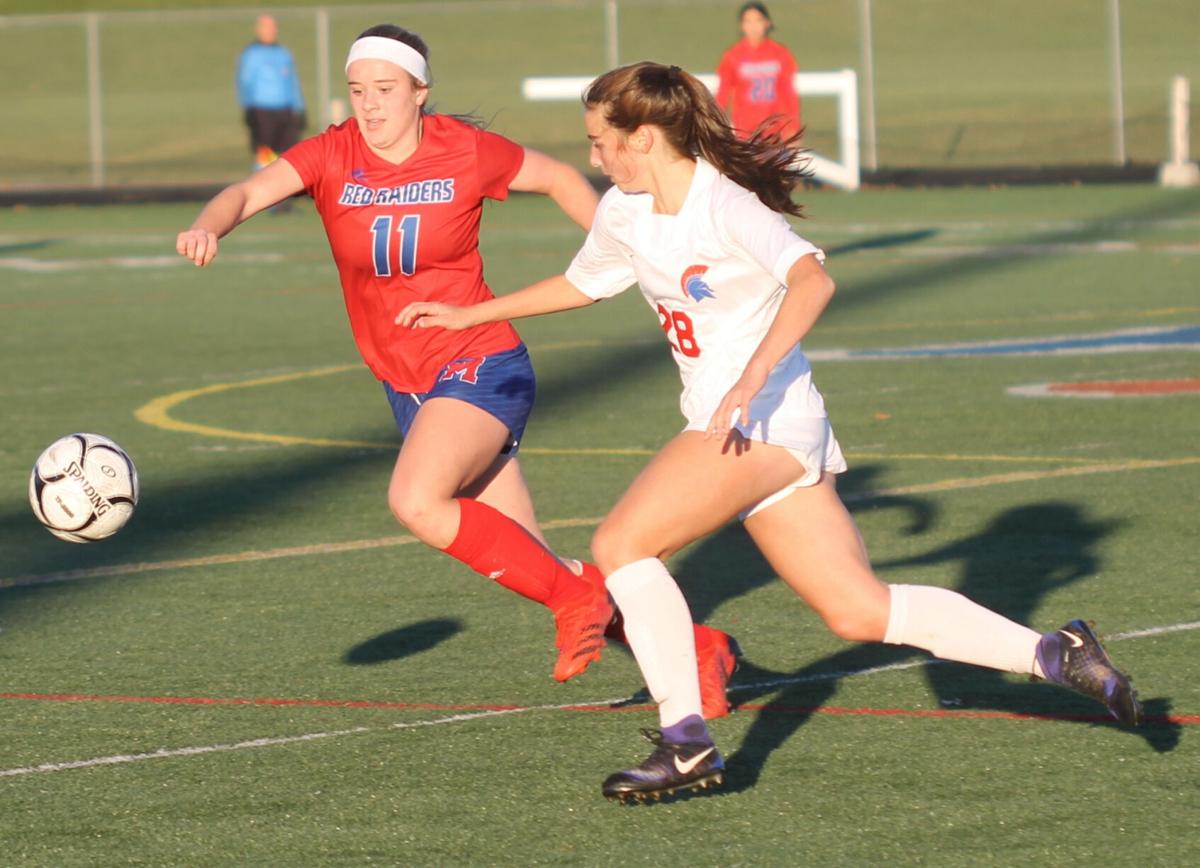 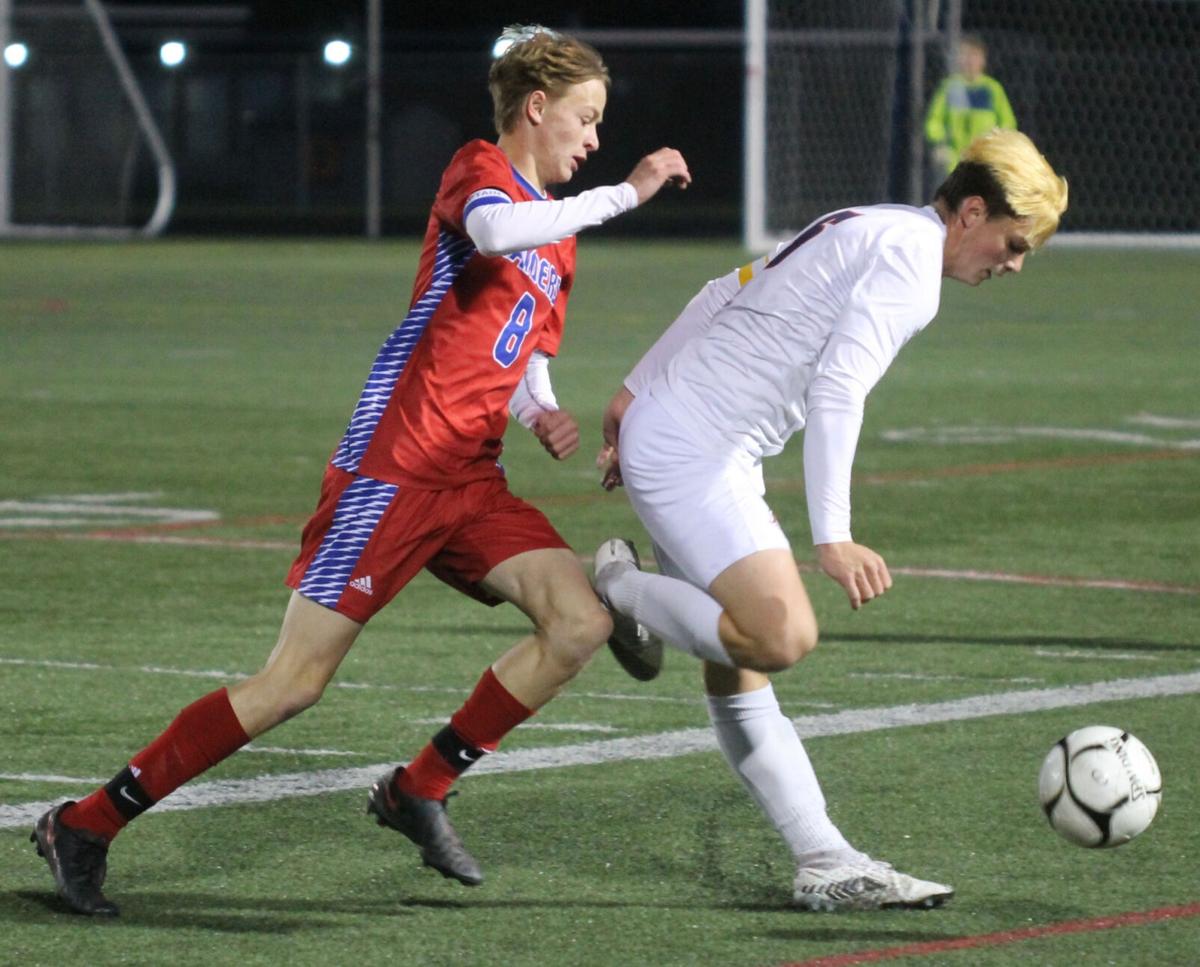 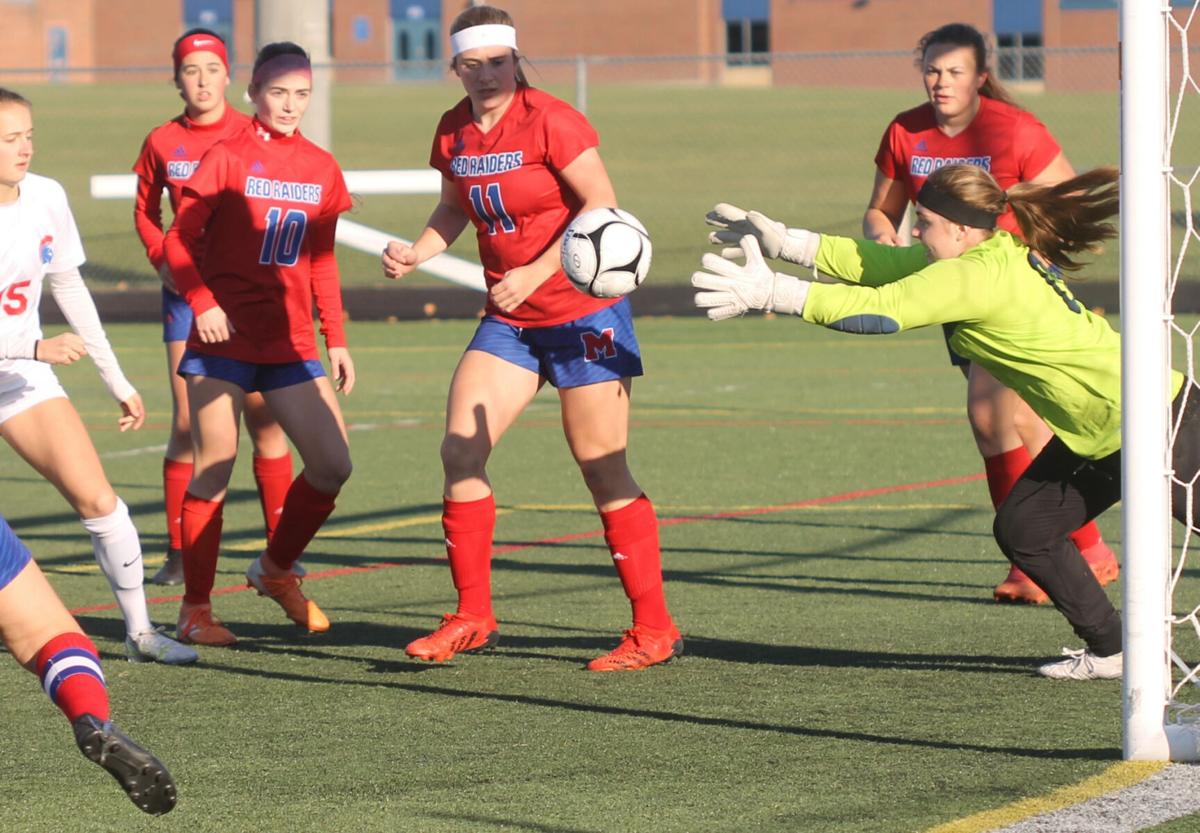 Just one Section 10 team emerged victorious out of a series of state quarterfinal soccer games Saturday in St. Lawrence County.

Early scoring outbursts boosted Section 3 to a sweep over Section 10 champions from Massena in the boys and girls Class A quarterfinals at Potsdam Central’s turf field.

East Syracuse-Minoa struck for a pair of goals four minutes apart in the first half and then added a pair of late goals for a 4-1 win over Massena. In the girls game, top-ranked New Hartford scored twice in the first two minutes en route to a 5-0 victory in a matchup of undefeated squads.

In Class C, Maple Hill shut out Section 10’s Madrid-Waddington 2-0 in Brasher Falls in a boys quarterfinal. In the D quarterfinals in Potsdam, the Lisbon boys fell 1-0 to Chazy but the Chateaugay girls prevailed 1-0 over Willsboro.

Chateaugay advances to a state semifinal game Saturday at a time to be determined in Cortland.

Four different players found the back of the net as the Spartans used a pair of quick goals in each half in Potsdam. Todd Durantini opened the scoring in the 11th minute with an unassisted goal and Zach Shufelt made it 2-0 less than four minutes later on a play set up by Joel Alverez.

Massena got on the board when Luke Greco converted on a cross from the left corner by Connor Terry with 3:50 left in the first.

After maintaining control from the start of the second half, ESM put the game out of reach with goals by Evan deBerjeiois in the 23rd minute of the second half and by Jackson Tedesco just over three minutes later.

Tending goal for the Spartans (19-2), Hamdija Cansevic made one save in the first half before giving way to Periandro Delgado, who didn’t record a stop over the final 7:22.

For the Red Raiders (13-4-1), Jacob Smutz made six stops in the first half and Colin Patterson took over for the second half for 12 saves.

New Hartford came into the game riding the momentum of a 35-game win streak and wasted little time setting the tone for its 36th straight victory as freshman sensation Caroline Sekula netted the first of her three first-half goals in the fifth minute and that would hold up as the game-winner.

Sekula struck again in the 10th and 32nd minutes in pushing the halftime lead to 3-0. Olivia Vitullo and Allison Falvo sealed the win with second half goals, the finale coming off a corner kick with 55 seconds remaining.

Anna Rayhill had a pair of assists while Savannah Cole handled the majority of goaltending duties and wasn’t called on to make a save.

Sabella Cromie turned aside six shots for Massena, which finished at 17-1 in the final season for head coach Ryan Hayes, who is stepping aside after 13 years.

Dillon Halvax scored what proved to be the winning goal off a pss from Ben Marra as Section 2’s Maple Hill blaned Section 10 champion Madrid-Waddington in Brasher Falls.

Maple Hill, led by coach Dan Gillespie, the winningest boys soccer coach in the state, advances to the state semifinals with an 18-2-1 mark.

“It was a good game. You get into state level play and you can’t make mistakes,” said Madrid-Waddington coach Ryan Robinson. “We knew we were going to have to play our best and get some breaks. They played great possession, we weathered the storm in the first half and went in down by 1.”

Madrid-Waddington (14-2-1) started the second half with the wind at their back, stepping up its play, but Maple Hill produced its second goal from Eli Charlebois, with an assist from Halvax for the final margin.

Lisbon coach Dickie Marcellus said before Saturday’s state Class D quarterfinal against Section 7’s Chazy that one goal might be enough to win the game.

Unfortunately for the Golden Knights, Chazy scored that one goal and defeated Lisbon on Saturday afternoon at Potsdam High School.

“They are the gold standard,” Marcellus said of Chazy (17-1 overall), which has always been one of the top Class D programs at the state level. “We needed to play good soccer and I thought we did. If we finished one of our chances, I think that’s the difference. They got the bounce early and they got the goal they needed and we just couldn’t equalize.”

Chazy scored its goal in the 25th minute during a scramble in front of the Lisbon net. Peter LaBarge scored on a rebound with an assist going to Luke Moser. It was the 19th goal of the season for LaBarge.

“I think it really helped us push forward,” LaBarge said. “The sun was in our eyes and we knew in the second half we would have the wind at our back and the sun in their eyes. It gave us a really good advantage. Both goalies were good. That goal was pretty lucky.”

LaBarge had another chance to score about eight minutes earlier but Lisbon goalie Caleb Richardson made a diving save.

The Golden Knights (14-2-2) had a good chance in the 22nd minute but a direct kick by Griffin Walker, from about 30 yards out, sailed just over the top of the crossbar.

The Eagles had three shots in the second half all clank off the top of the goalpost.

Zane Stevens finished with six saves for the shutout.

“The defense was great,” Stevens said. “(Lisbon) had a fast offense. I only had a few times I had to go out. They made my job easier today.”

“When you get to this level there is no easy game,” Marcellus said. “They don’t allow goals, we don’t allow goals. It was going to come down to whoever could finish one. They got that bounce early and were able to finish.”

Said Chazy coach Rob McAuliffe, “We have a relatively young team who hasn’t played in big games since (2019). I was very proud of the effort they gave. We knew that today was probably going to be a one-goal game. I think we played well with the lead and didn’t give them many chances.”

Chateaugay girls soccer defender Ryleigh Reardon had one thought racing through her head as she wrestled for possession of the ball with a Willsboro player near the six, in front of the Chateaugay goal.

“Honestly, I was hoping she wouldn’t get by me, because I knew (head coach) Jason (LaPlante) would be on the sidelines screaming,” Reardon said, with a chuckle. “So, right then, I was just focused on trying to get it out.”

Chateaugay was clinging to a one-goal lead over Willsboro with six minutes left and a trip to the state tournament’s semifinals next weekend in Cortland on the line.

The Bulldogs dispatched the Warriors from their territory and held their lead in the game’s closing minutes, and win their first final four berth since 2015.

“The first half we couldn’t have played any better, the second half ... we kind of got in a rut a little bit but held strong,” LaPlante said.

Olivia Cook netted the sole goal of the game with 5:21 left in the first half, off a chip pass from Emma Locklin.

“The big thing was, to just keep it up,” Locklin said. “And, I know Liv, and Liv is always there. It was luck, really.”