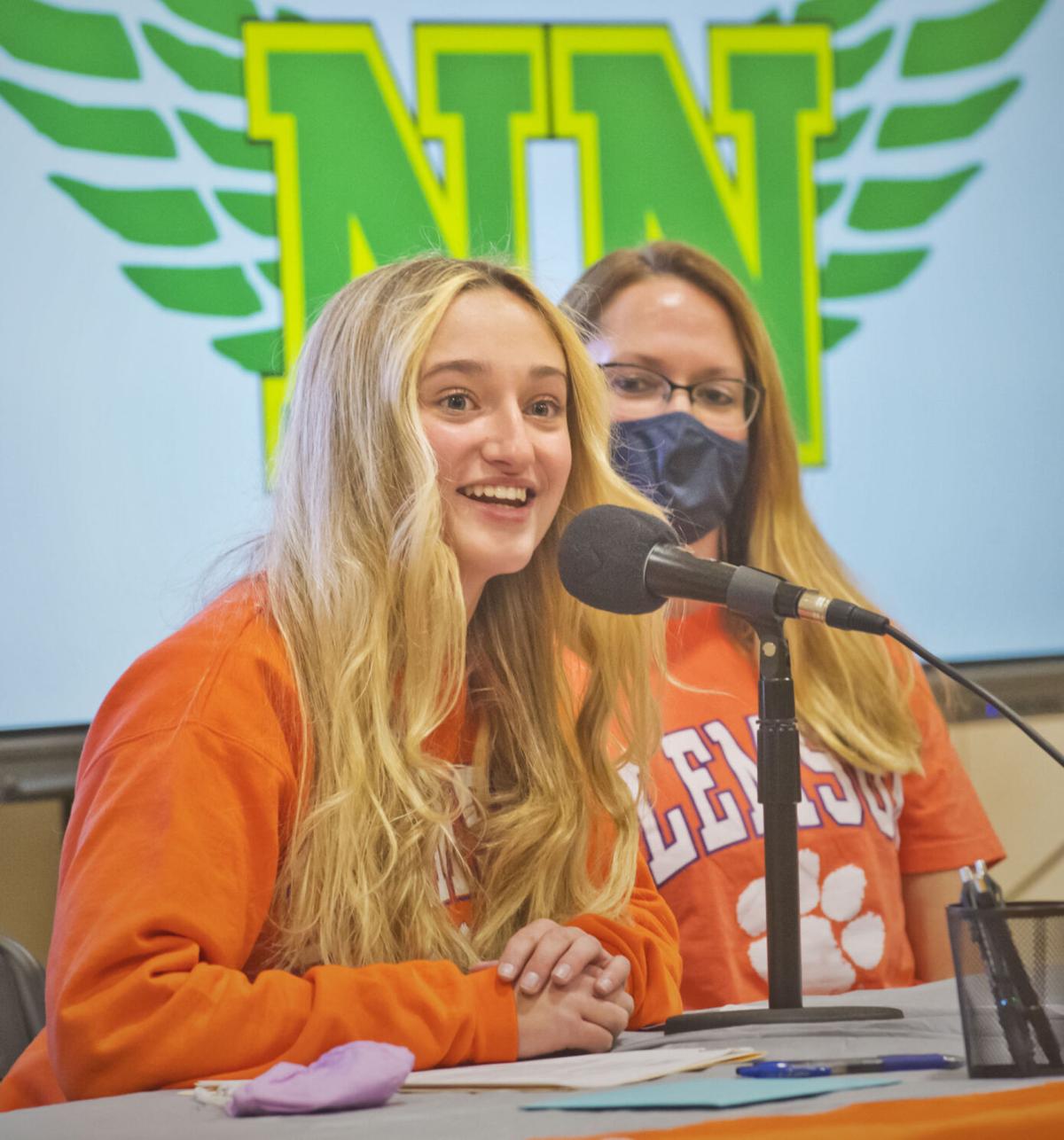 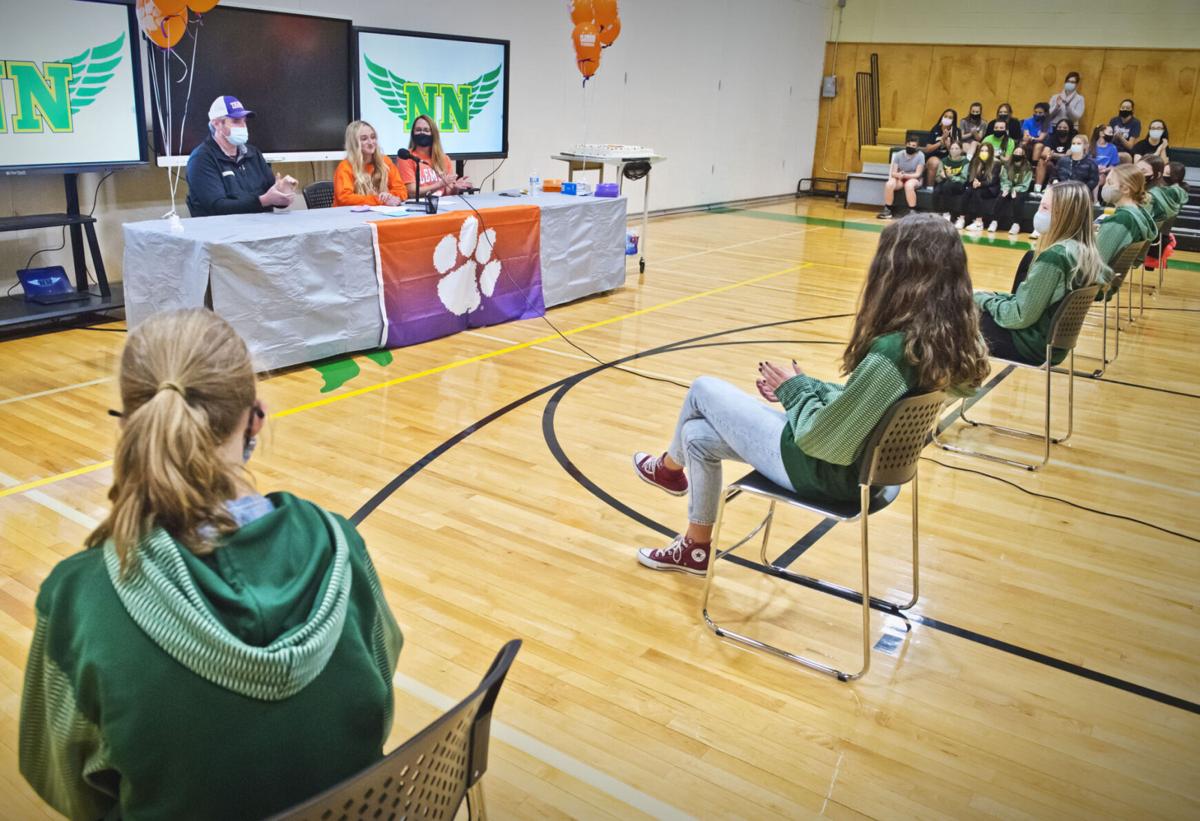 Maddie Dinneen’s Norwood-Norfolk cross country teammates are in the front row to watch her sign a letter of intent to Clemson University on Tuesday. Christopher Lenney/Watertown Daily Times 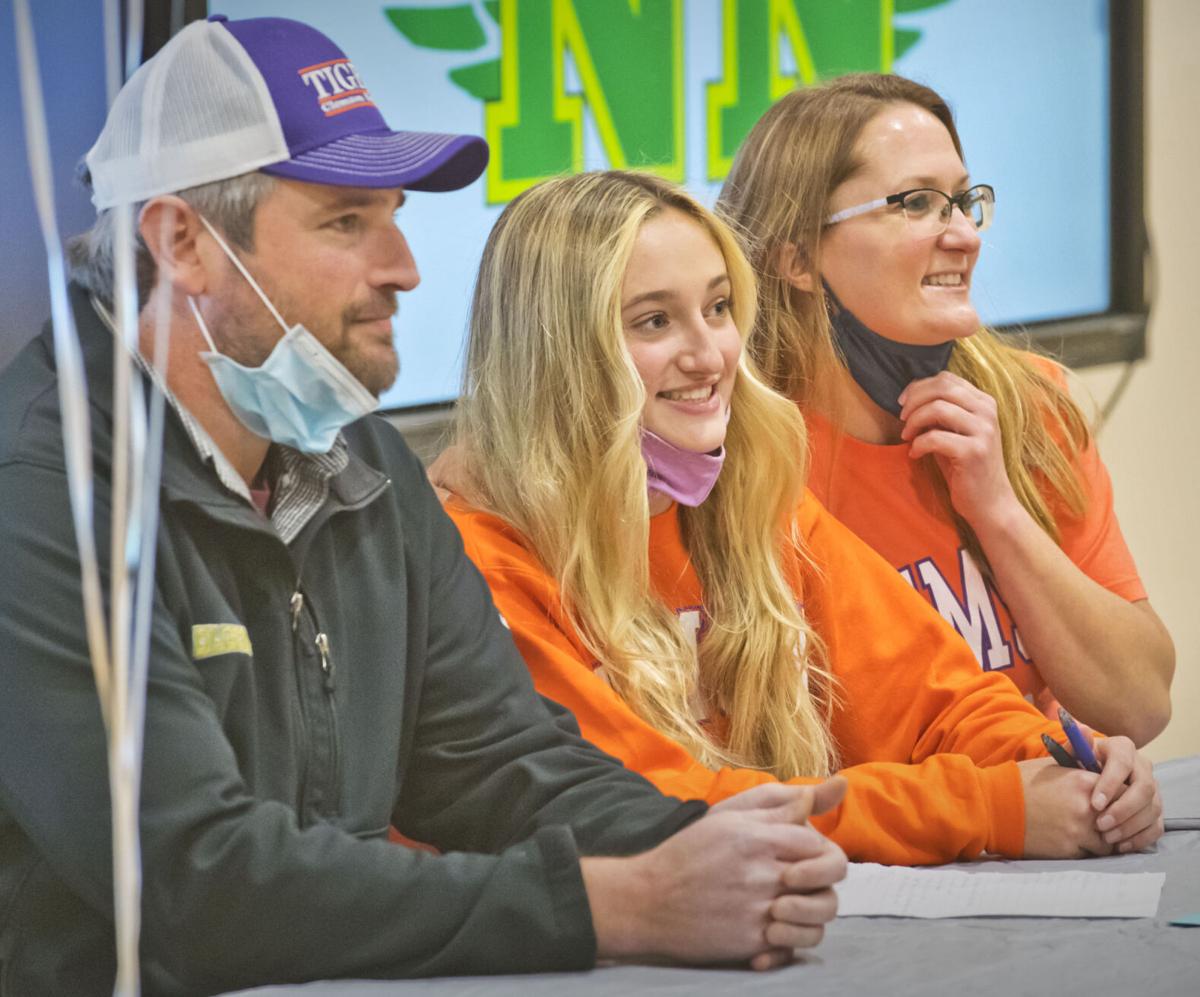 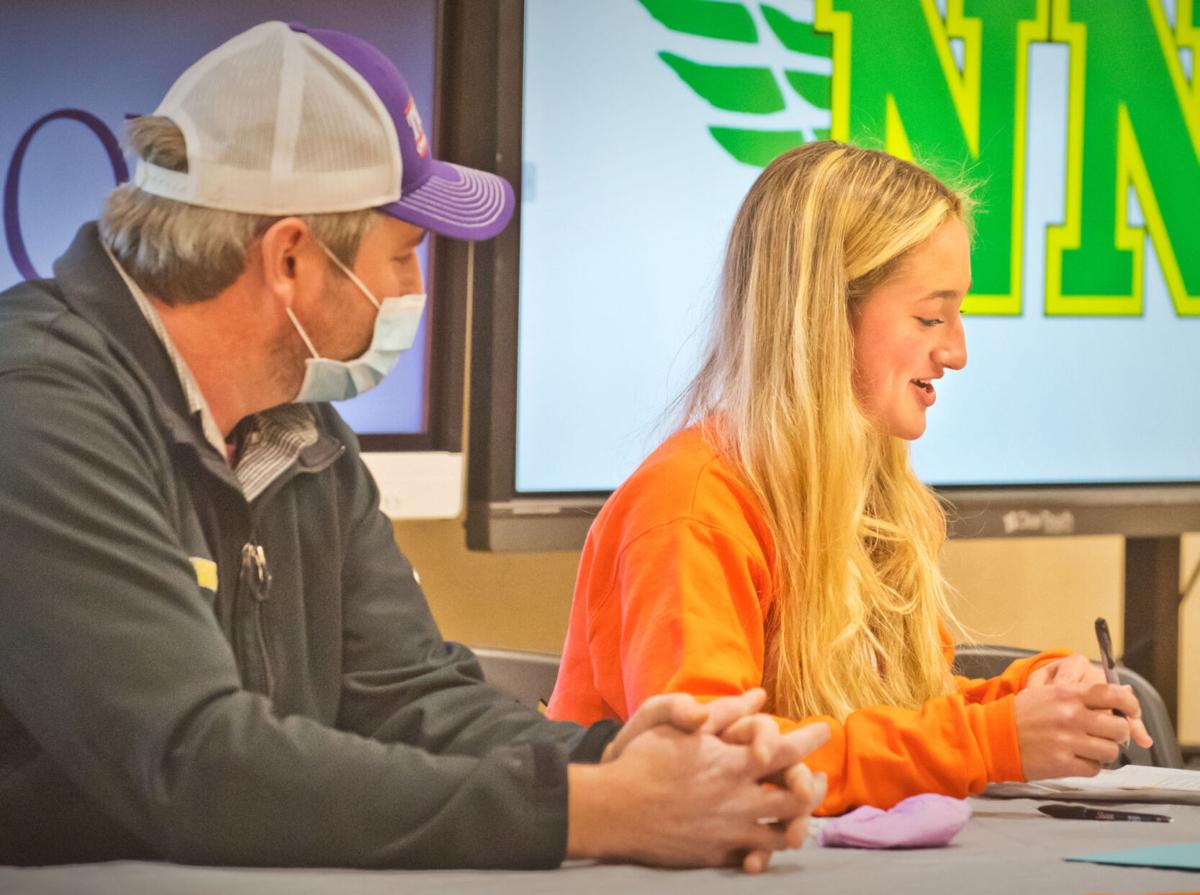 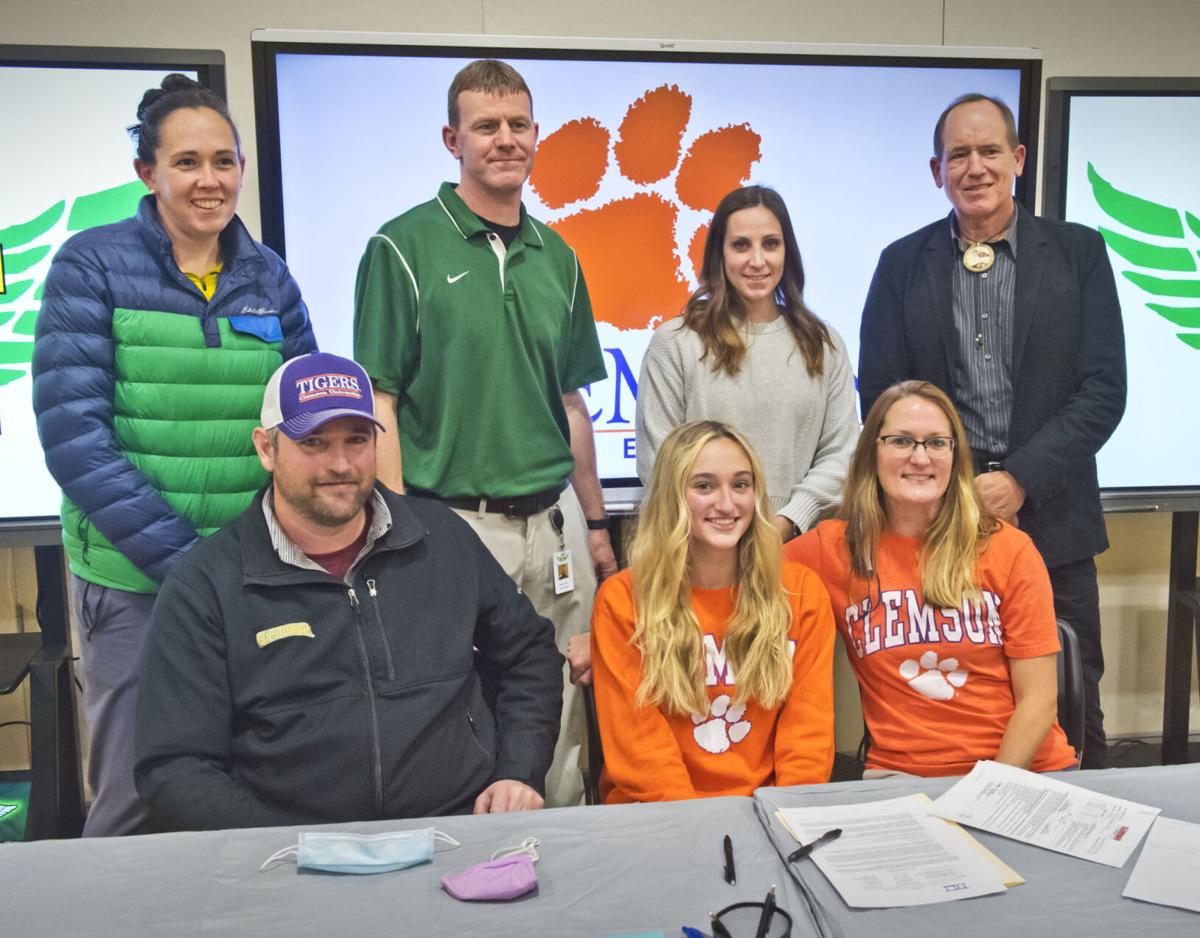 Maddie Dinneen’s Norwood-Norfolk cross country teammates are in the front row to watch her sign a letter of intent to Clemson University on Tuesday. Christopher Lenney/Watertown Daily Times

Seated between her parents, Daniel and Lisa, at a table placed at the high school gym in front of a crowd of teammates, coaches, teachers, school administrators and friends, the five-year Flyers stalwart signed her National Letter of Intent to become a member of the NCAA Division I program at Clemson University in South Carolina starting next school year.

“The only way to get better at something is to fail,” said Dinneen after first offering thanks to those attending the ceremony for their contributions to her success as one of the top runners to come out of Section 10. “Another piece of advice I can give is, do something out of your comfort zone. Develop other interests outside sports. Have a social life. Get out and make friends. You are only an athlete for a couple of hours a day.”

A promising soccer player as a seventh-grader, Dinneen was eventually encouraged to compete for the track and field program by varsity coach Kent Fetter. The next fall season, she made the move to cross country.

“When I think of all that Maddie has accomplished, not just in cross country but in winter track and spring track, she has to be considered the greatest female runner to come out of Norwood-Norfolk Central,” said Fetter, who has now seen the girls cross country team put together four straight undefeated NAC championship and Section 10 championship seasons with Dinneen serving as the main catalyst for the program’s success.

“Maddie is the first female runner (at the school) to run the mile in under five minutes. She’s now medaled at four state cross country meets and I’m sure she would have gotten a fifth medal if there would have been a state meet in 2020,” he added. “She’s set all sorts of school and sectional records in track. Maddie is easily the most-decorated runner in school history.”

In signing her letter of intent to compete at Clemson, Dinneen follows former teammate Sydney Levison, who is a junior member of the Division I cross country team at Siena College.

“After I won a few meets, I started creating goals for myself,” Dinneen said. “My teammate, Sydney Levison, showed me all the ropes and I started to realize that cross country was something I could do well. When I saw that Sydney was able to go on and compete in college, I decided, hey, I want to do that, too.”

An outstanding student as well, Dinneen said she looked into a wide range of options for continuing her cross country career and eventually settled on Clemson because her campus visit gave her “a warm feeling” and “sense of being home.”

“With me, it’s all about the people that you’re with. Why do a sport if you’re not around people you like? I immediately fell in love with everything about Clemson and I look forward to taking it to the next level,” she said.