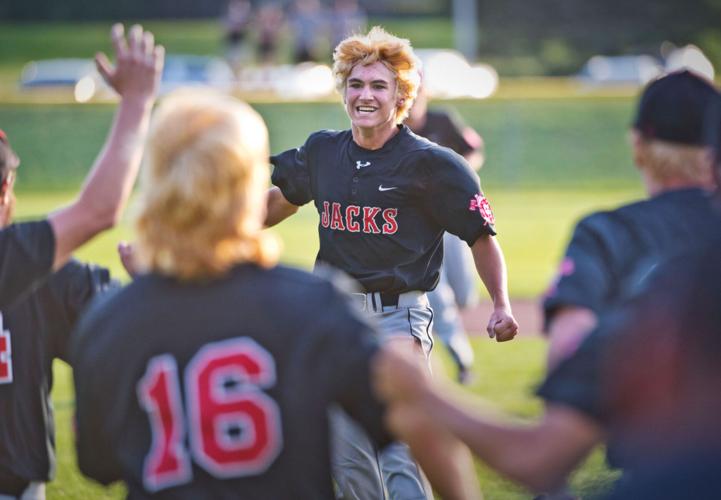 Tupper Lake pitcher Karter Kenniston is greeted by teammates as the final out against Heuvelton is recorded in the Section 10 Class D baseball final Tuesday. Christopher Lenney/ Watertown Daily Times 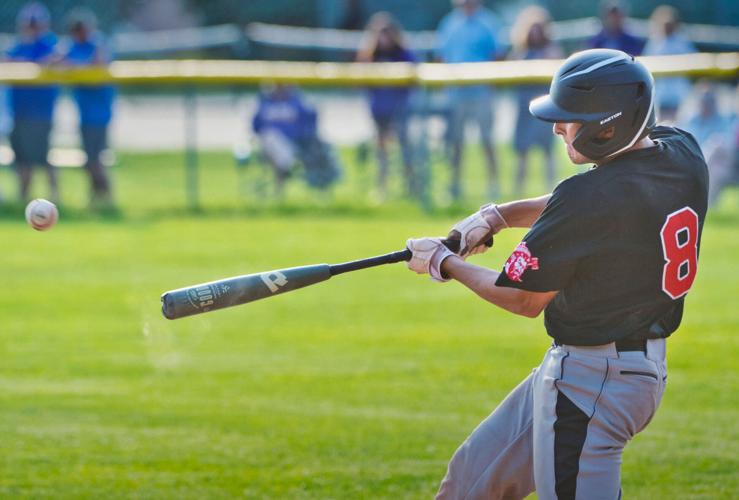 Tupper Lake’s Griffin Shaheen’s connects for his second triple of the game in the bottom of the sixth inning Tuesday. Christopher Lenney/ Watertown Daily Times 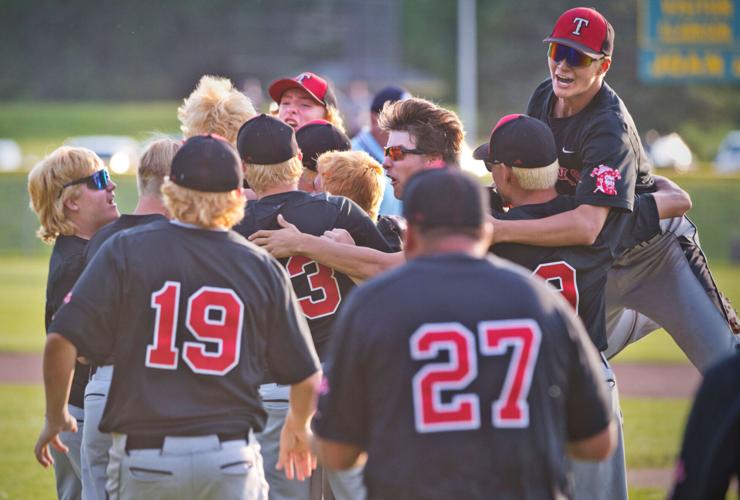 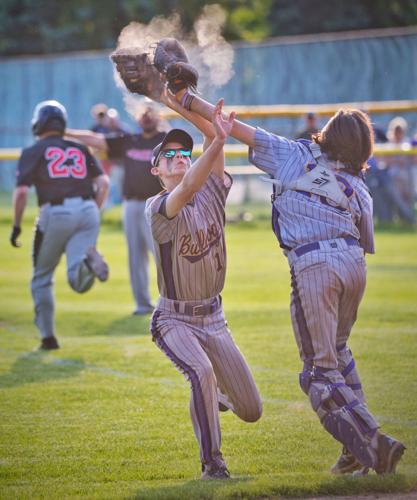 Heuvelton’s Jakob Ladouceur, left, avoids a collision with teammate Jededia Crayford and catches the ball, May 31, to record and out on a pop-fly by Tupper Lake’s Grant Bencze in the bottom of the sixth inning of the Section X Class D Championship baseball game. Christopher Lenney/ Watertown Daily Times . 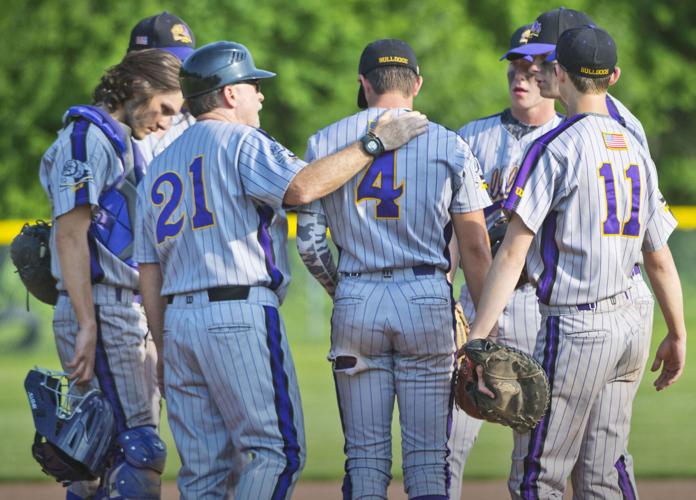 Heuvelton coach David Steele pats starting pitcher Adam Calton on the back as he is replaced Lucas Thornhill during a Tupper Lake rally in the bottom of the fourth inning Tuesday. Christopher Lenney/ Watertown Daily Times 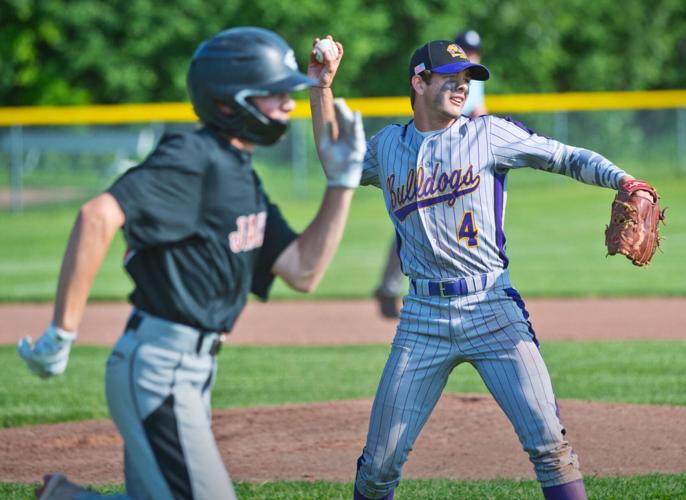 Tupper Lake pitcher Karter Kenniston is greeted by teammates as the final out against Heuvelton is recorded in the Section 10 Class D baseball final Tuesday. Christopher Lenney/ Watertown Daily Times

Tupper Lake’s Griffin Shaheen’s connects for his second triple of the game in the bottom of the sixth inning Tuesday. Christopher Lenney/ Watertown Daily Times

Heuvelton’s Jakob Ladouceur, left, avoids a collision with teammate Jededia Crayford and catches the ball, May 31, to record and out on a pop-fly by Tupper Lake’s Grant Bencze in the bottom of the sixth inning of the Section X Class D Championship baseball game. Christopher Lenney/ Watertown Daily Times .

Heuvelton coach David Steele pats starting pitcher Adam Calton on the back as he is replaced Lucas Thornhill during a Tupper Lake rally in the bottom of the fourth inning Tuesday. Christopher Lenney/ Watertown Daily Times

POTSDAM — The Tupper Lake baseball team stayed loose and united all season and it paid off with an 11-6 victory over Heuvelton in the Section 10 Class D championship game Tuesday at Clarkson University.

The Lumberjacks (14-4 overall) won their first boys team championship in any sport since returning to Section 10 prior to the 2005-06 school year.

The team features several players who dyed their hair blond. Each game a new player has done so but coach Dan Brown joked after the game that he’s not going to be in the list.

The Lumberjacks will travel to SUNY Plattsburgh to face Section 7 champion Crown Point on Saturday in a state quarterfinal game. The time has not been announced.

Tupper Lake was 6-7 last year with the same core group of players who won the championship Tuesday.

“The biggest thing with us is we have a group of guys that hang out every day after practice,” Brown said. “They hang out all day in school together. They golf together. They swim together. They are dropping pizzas off at my house when they have leftovers at night. It’s just a group of 15 dudes that want to be together all the time, and they are a team. When I think of a team, I think of these guys.”

The current Lumberjacks were in their first championship game in any sport and faced a Heuvelton program that has been a regular in these type of games over the years.

The Bulldogs (9-4) put the Lumberjacks in a 3-0 hole heading into the bottom of the third inning.

With one out in the bottom of the inning, Tupper Lake’s ninth batter, Garrett Dewyea, singled. Karter Kenniston followed with another single and a walk to Ryder Willett loaded the bases.

Dewyea scored on a wild pitch and Grant Godin struck out, but the last pitch got away from Heuvelton’s catcher, enabling Kenniston to score with Godin winding up on second base.

Griffin Shaheen followed with a triple to score Willett and Godin and then scored on a single by Luke Robillard to put Tupper Lake ahead 5-3.

“It came down to a few errors,” said Heuvelton coach Dave Steele. “That one big inning was a big uplift for us. We thought we got it turned in our favor. That’s how baseball happens. Nerves in one inning and it turns around and builds a little momentum. I thought we had chances.”

Shaheen, Tupper Lake’s catcher, tripled again in the bottom of the sixth and finished 4-for-4, driving in five runs. He also threw out a Heuvelton runner trying to steal second.

“It means a lot not just to the school but also the community,” Shaheen said of the win. “We worked hard every day. It just showed.”

Godin finished 2-for-4 for the Lumberjacks.

“We’ve been starting slow in a couple of our games, but I’m very happy to see the bats came out,” Godin said. “The bats came alive and that’s what’s been helping us win games all year. We put up a lot of runs.”

Kenniston threw a complete game, striking out seven, and went 2-for-4.

“My curveball was right on point,” Kenniston said. “I got them thinking a little bit to counter the fastball. I had a lot of confidence in my team.”

Robillard and Dewyea each went 2-for-4.

Hammond noted a promising start scoring a run in the top of the first inning against Edwards-Knox in the Section 10 Class D Championship at SUNY Potsdam.

But Edwards-Knox answered with a much better start, plating its first five batters in the bottom of the first inning, which proved decisive in the seven-run victory, which advanced the Cougars into a state playoff game against Section 3 champion Oriskany at 3:30 p.m. Saturday at SUNY Potsdam. Oriskany shaded Poland 6-5 in the Section 3 title game.

Northern Athletic Conference West Division MVP Cady Wheat made the inning stand as the difference, striking out nine, walking none and hitting one batter with a pitch in the latest of a long series of strong performances on the mound for the Cougars. She hit Mikayla Jones with a pitch leading off the game and issued no more free passes for the rest of the game.

“The first inning was so big for me. We could feel that we were off to a good start,” Wheat said.

“I had good command of my pitches and felt very comfortable.”

The Cougars took advantage of control problems by Hammond starter Sydney Tanner, who walked three batters and gave up three of the six Edwards-Knox hits in the first inning.

“Early in the season we lost a close game to Heuvelton and told the girls that they could do it. We just got better as the season went on and Cadey Wheat developed great control,” said Edwards-Knox coach Lori Brewer, who was honored as the NAC West Coach of the Year.

Lily Lottie singled between walks and the first three Cougars batters all scored when Kayleigh Allen lined a triple to the fence in center field. Sophia Vachez reached on an error and scored on a single by Leeanne Allen. Rylie Typhair and Macy White singled to produce two runs in the third inning and Vachez and Hall reached on infield errors and scored in the fifth inning.

“We had some hits but didn’t string them together. We have never had that many errors in a game,” said Hammond coach Katina Dillon, who returns seven starters for next season. “Our young squad was nervous.”

Salmon River did not exact its revenge on Canton, after falling to the Golden Bears in last spring’s Section 10 title game.

Instead, the Shamrocks matched up with Ogdensburg Free Academy, a team that last week clipped Canton by one goal to advance to its first Section 10 championship contest.

Salmon River prevailed in the final at Potsdam High School to earn the section’s crown.

“We knew what we had to do for the game,” Salmon River attackman/midfielder Crayton Cree said. “We didn’t come out (at the start) and do what we wanted to, but in the end we kind of fixed things up and held it all together.”

The Shamrocks ended the game on a 6-0 run to advance into the Class D state tournament bracket. OFA also advanced to state play in the Class C state bracket. Both teams will play in Potsdam on Saturday, in the regional round.

Cree on Tuesday led the Shamrocks with four goals.

Although OFA’s tenacity on the ball and on the ground forced turnovers throughout the contest, Salmon River’s offense spread the ball around, as three other Shamrocks finished with two-goal games; Rarennenha:wi Cook-Francis, Kyden Burns and Taharihwakohe Lazore.

Dylan Irvine led the way offensively for OFA with two goals and an assist.

Salmon River’s offense outscored the Blue Devils 6-1 in the second half.

The Shamrocks’ defense held FA off the board through the final 17 minutes of play, as the Blue Devils could not find the net once in the fourth quarter.