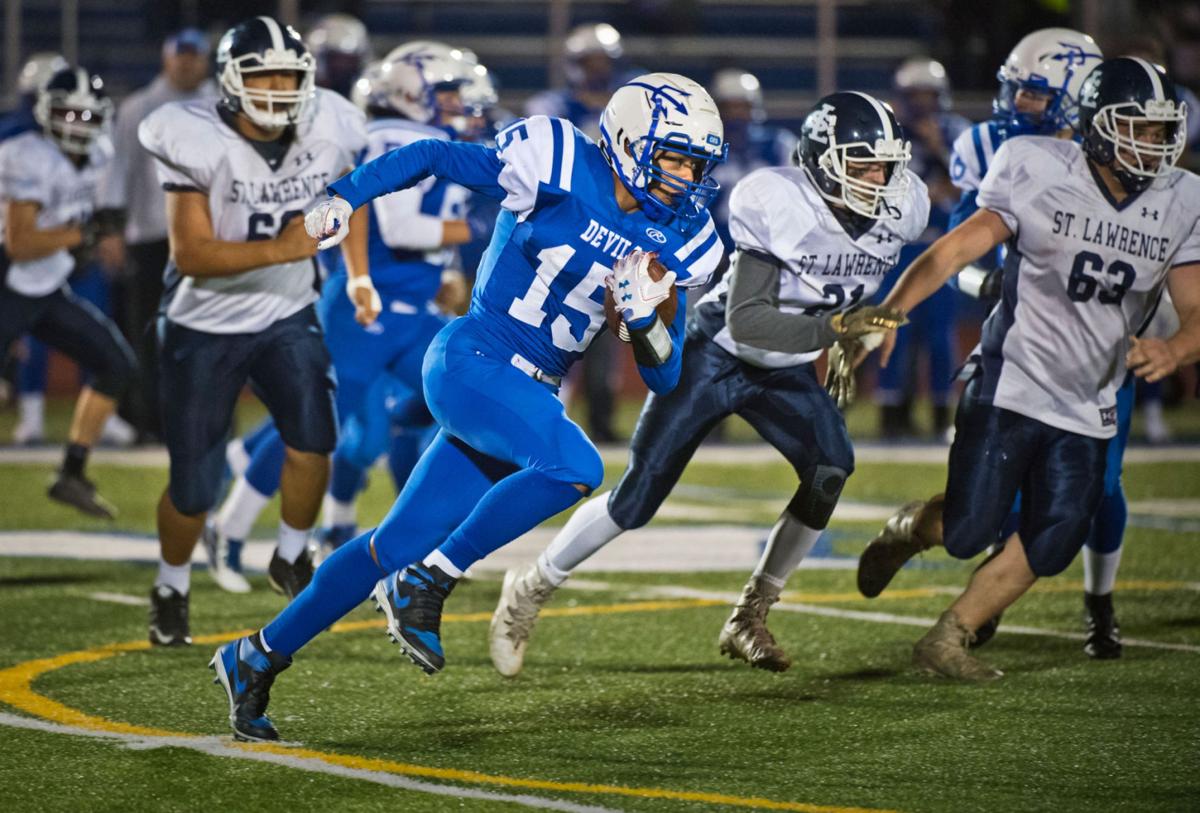 Ogdensburg Free Academy’s MeSean Johnson, center, changes direction against St. Lawrence Central as he runs back a punt for a touchdown in the first half of Friday’s game in Ogdensburg. Christopher Lenney/Watertown Daily Times 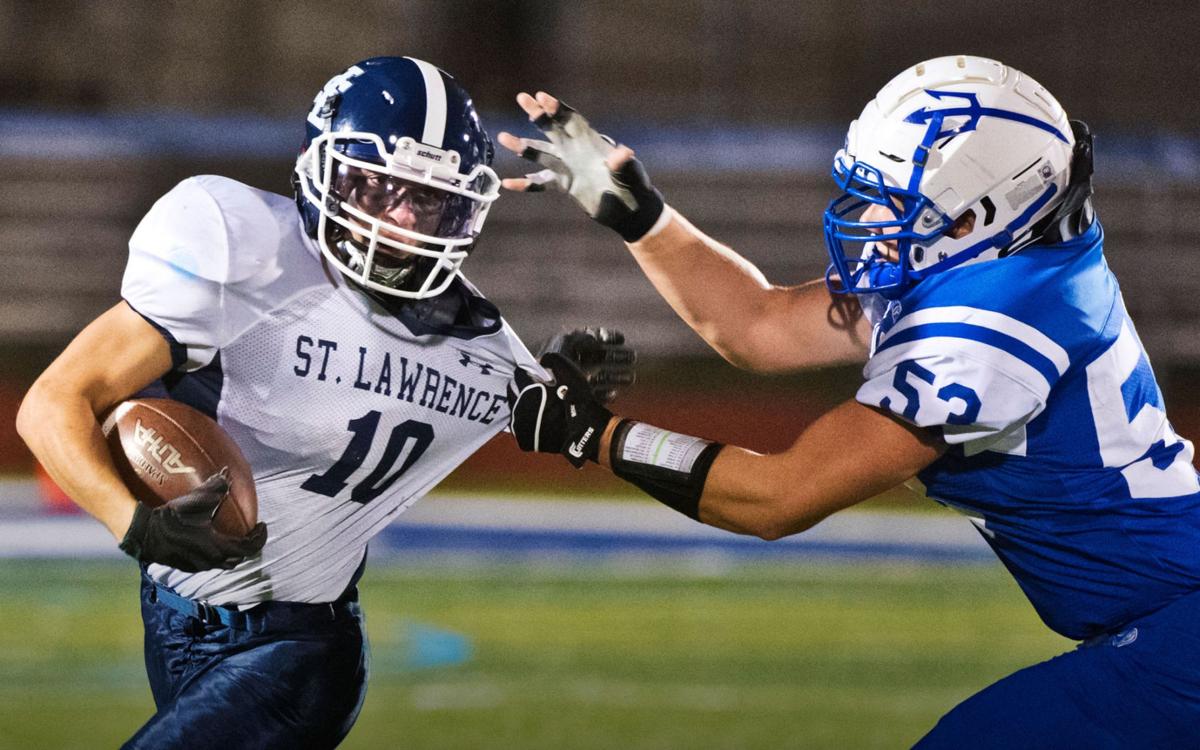 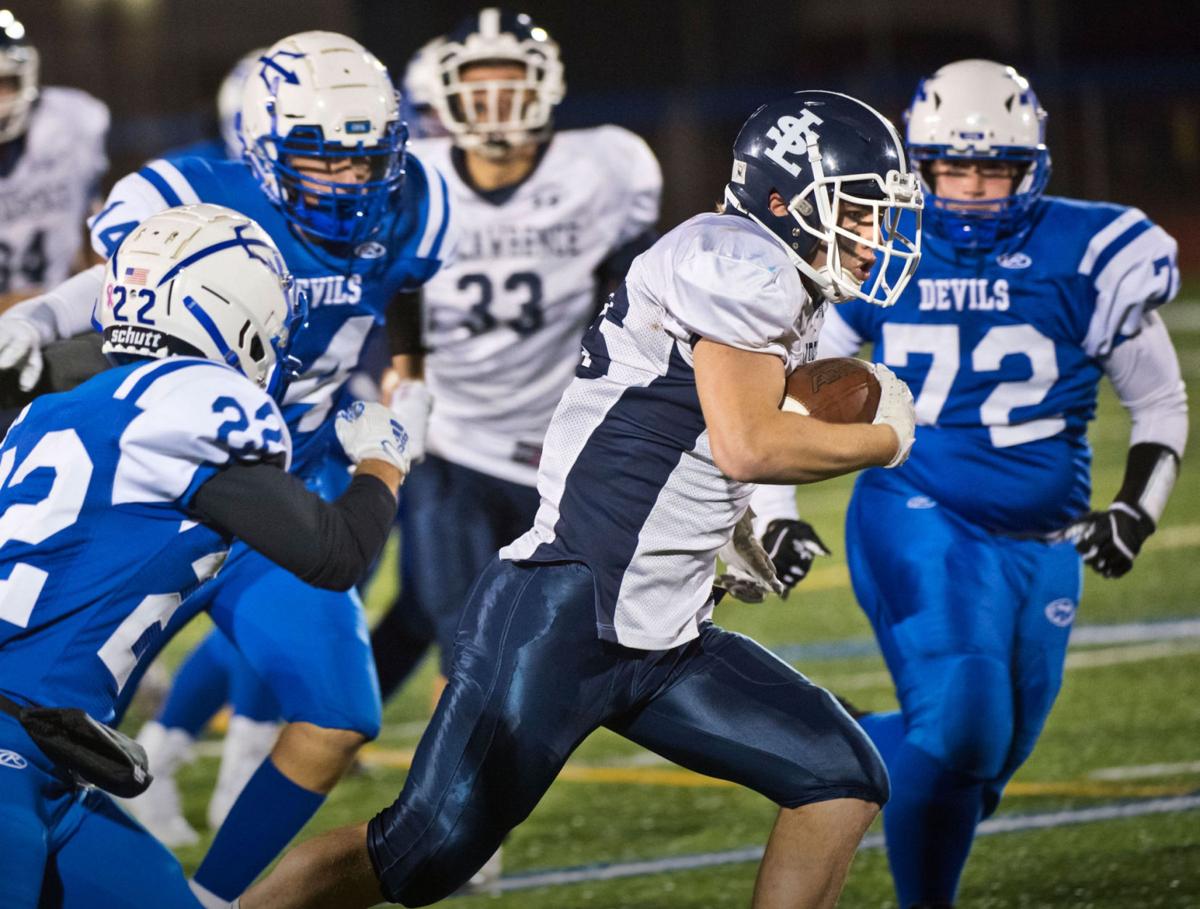 St. Lawrence Central’s Hunter Arquiett, center, splits the Ogdensburg Free Academy defense as he picks up a first down in the first half of Friday’s game in Ogdensburg. Christopher Lenney/Watertown Daily Times 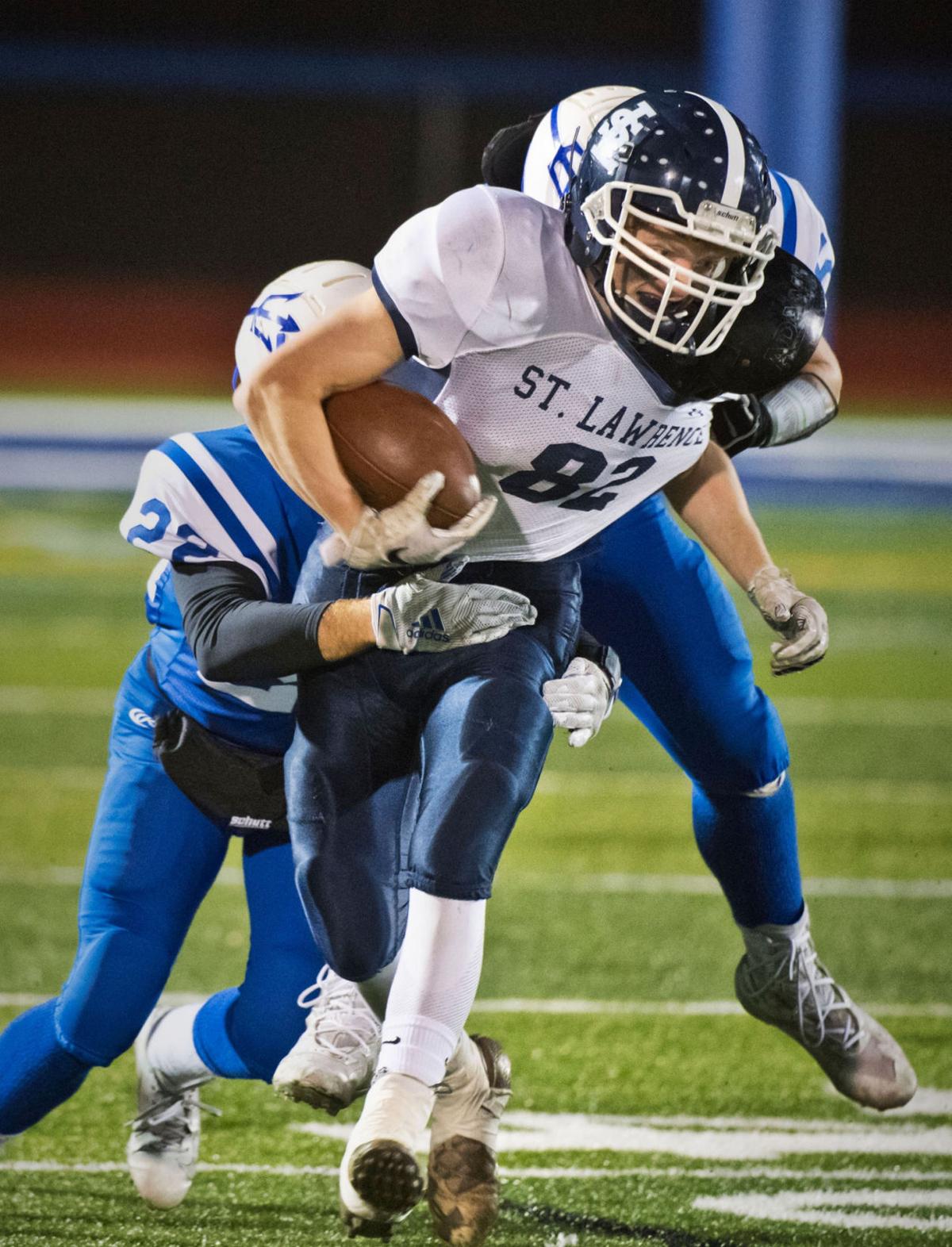 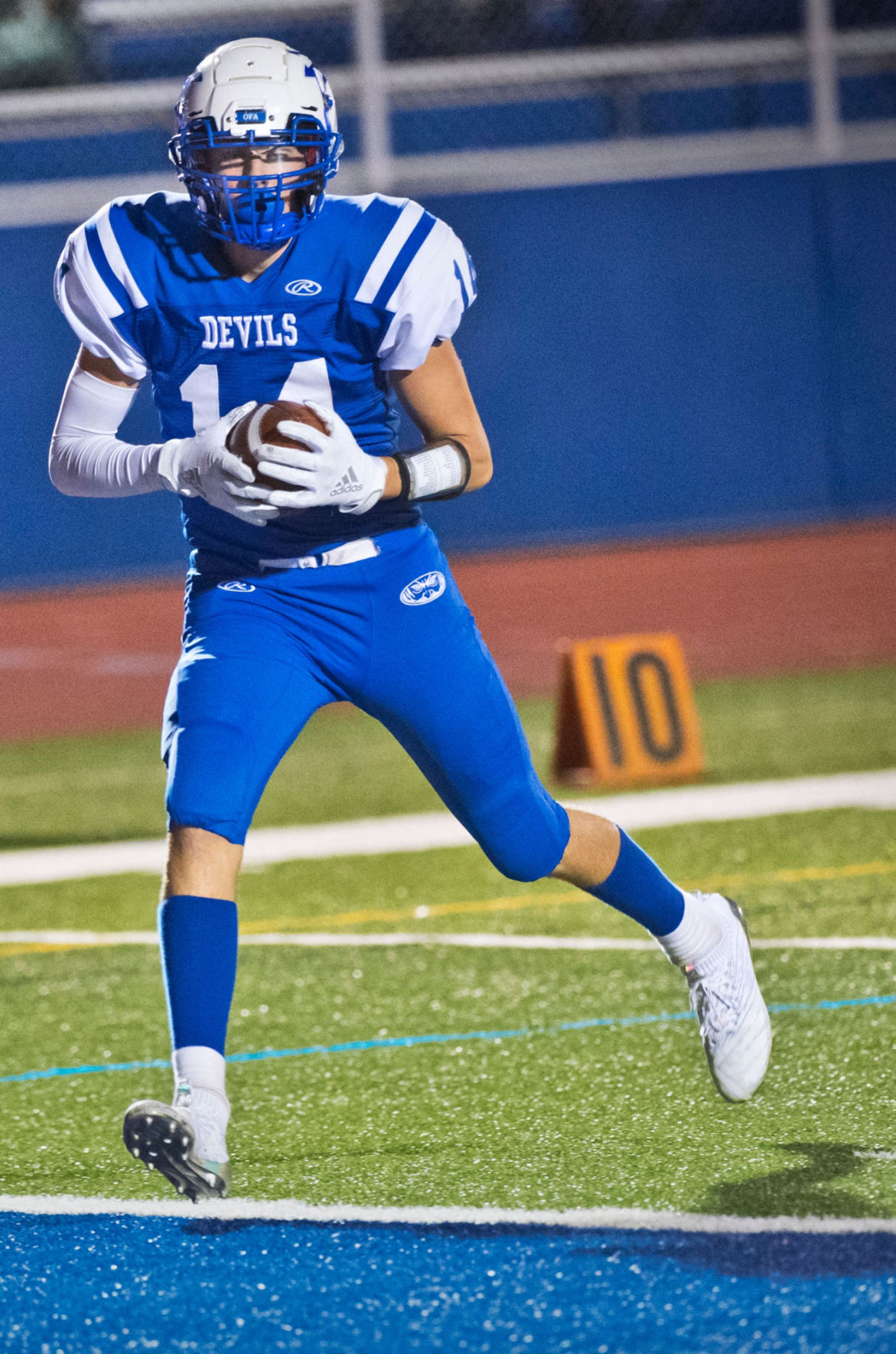 Ogdensburg Free Academy’s MeSean Johnson, center, changes direction against St. Lawrence Central as he runs back a punt for a touchdown in the first half of Friday’s game in Ogdensburg. Christopher Lenney/Watertown Daily Times

St. Lawrence Central’s Hunter Arquiett, center, splits the Ogdensburg Free Academy defense as he picks up a first down in the first half of Friday’s game in Ogdensburg. Christopher Lenney/Watertown Daily Times

OGDENSBURG — Friday night’s Section 10 Class C football semifinal game was the last time any of the Ogdensburg Free Academy seniors will get to play a game on their home field.

The second-seeded Blue Devils made the final game for the seniors memorable with a 46-7 win over No. 3 St. Lawrence Central, building a 38-0 halftime lead on the Larries (3-5 overall), who saw their season end.

“We wanted to just play the game,” Blue Devils coach Matt Tessmer said of a contest scouted by the Wildcats’ coaching staff. “I’m not too worried about secrets or anything. We played them so many times. We don’t have any secrets from (Gouverneur), they know what we do. (Football) is one of the only times the kids get to work together for one thing and they get to represent their town, their families. It’s really a unique situation the kids have in high school. When kids are seniors they start to see the end of it and it becomes real.”

The first senior to make a big play for the Blue Devils was MeSean Johnson, who does just about everything, from returning kicks, to playing wide receiver, running back and even quarterback.

On OFA’s first possession, he took a handoff from senior quarterback Jackson Jones, then ran toward the sideline and threw a 29-yard touchdown pass to an open Stephen Morley, another senior, to give OFA a 6-0 lead.

Johnson scored on a four-yard run late in the first quarter and then caught a pass from Jones on the two-point conversion to make it 14-0.

Senior John Powers scored on a three-yard run midway through the second quarter to make it 22-0 and, then after the Larries were forced to punt after three plays, Johnson took what looked like a routine punt return and broke it into a 68-yard scoring run to put OFA up 30-0.

“At first I saw a lot of (SLC) guys, so I didn’t know how far I was going to go,” Johnson said. “I made a good cut and there was a lot of daylight.”

On the next play, Jones threw a 62-yard scoring pass to Powers to give the Blue Devils a big 38-0 lead by halftime.

“It’s just special, I love playing with my teammates,” Powers said. “Football is such a short season. We just want to make the best of it and keep going in the playoffs. I just love these guys and it’s special playing with them. (The touchdown pass) was a great pass and I like completing them for (Jones). He’s my best friend.”

Senior Tristan Lovely scored on a three-yard run late in the third quarter to give OFA its final points of the game.

The Larries picked up their only touchdown early in the fourth quarter on an 18-yard run by Ansen Weegar.

“We had a lot of guys hurt, but the guys on the field today played with their hearts and they played hard,” Larries coach Bruce Truax said. “The kind of kids I had this year, the seniors showed up today and played hard and kept fighting. That’s the kind of kids we have, very tough, and they play hard. They are awesome kids.”

SLC was trying to score another touchdown late in the game, but Powers intercepted a pass from Weegar in the end zone. The Blue Devils intercepted two passes and held the Larries to 184 yards offensively.

“It was a little slow at the beginning, but towards the end we got it on,” OFA senior linebacker Mark Barr said. “It’s really emotional.”

Potsdam didn’t look past a winless Malone squad in the Section 10 Class B title game. The Sandstoners successfully defended their sectional title, methodically working their way to a win over the Huskies.

In two weeks, Potsdam (6-2) will play against a yet-to-be determined Section 7 champion at a site in the Plattsburgh-area. Malone finished the season at 0-8.

The Sandstoners set the tone in the first quarter where they put up 20 unanswered points. Will Varney, who entered the game needing 49 yards to surpass 1,000 yards for the third time in his varsity career, opened the scoring with a 15-yard run with 6:16 left. He wound up with 68 yards on four carries and didn’t play offense until the second half.