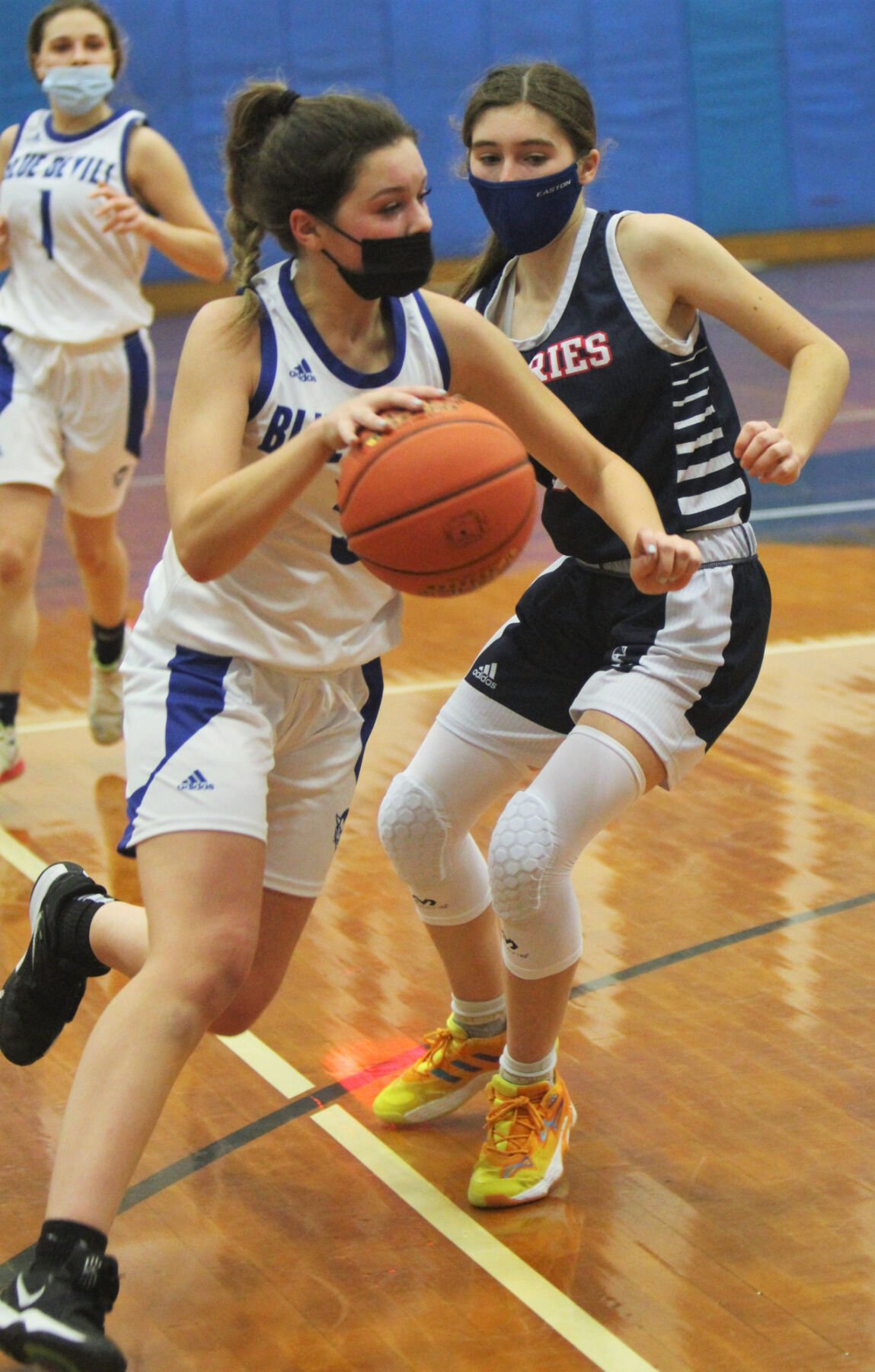 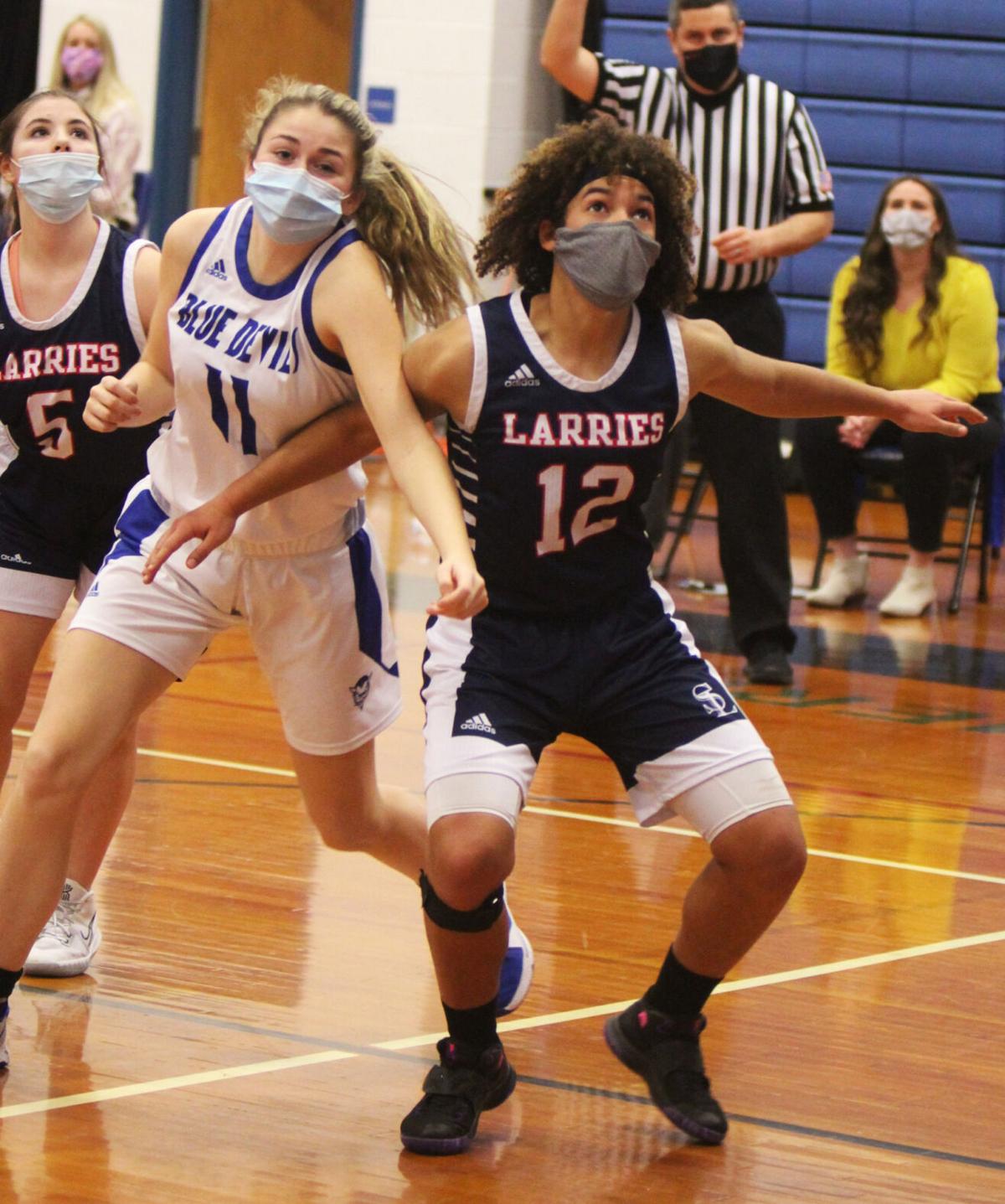 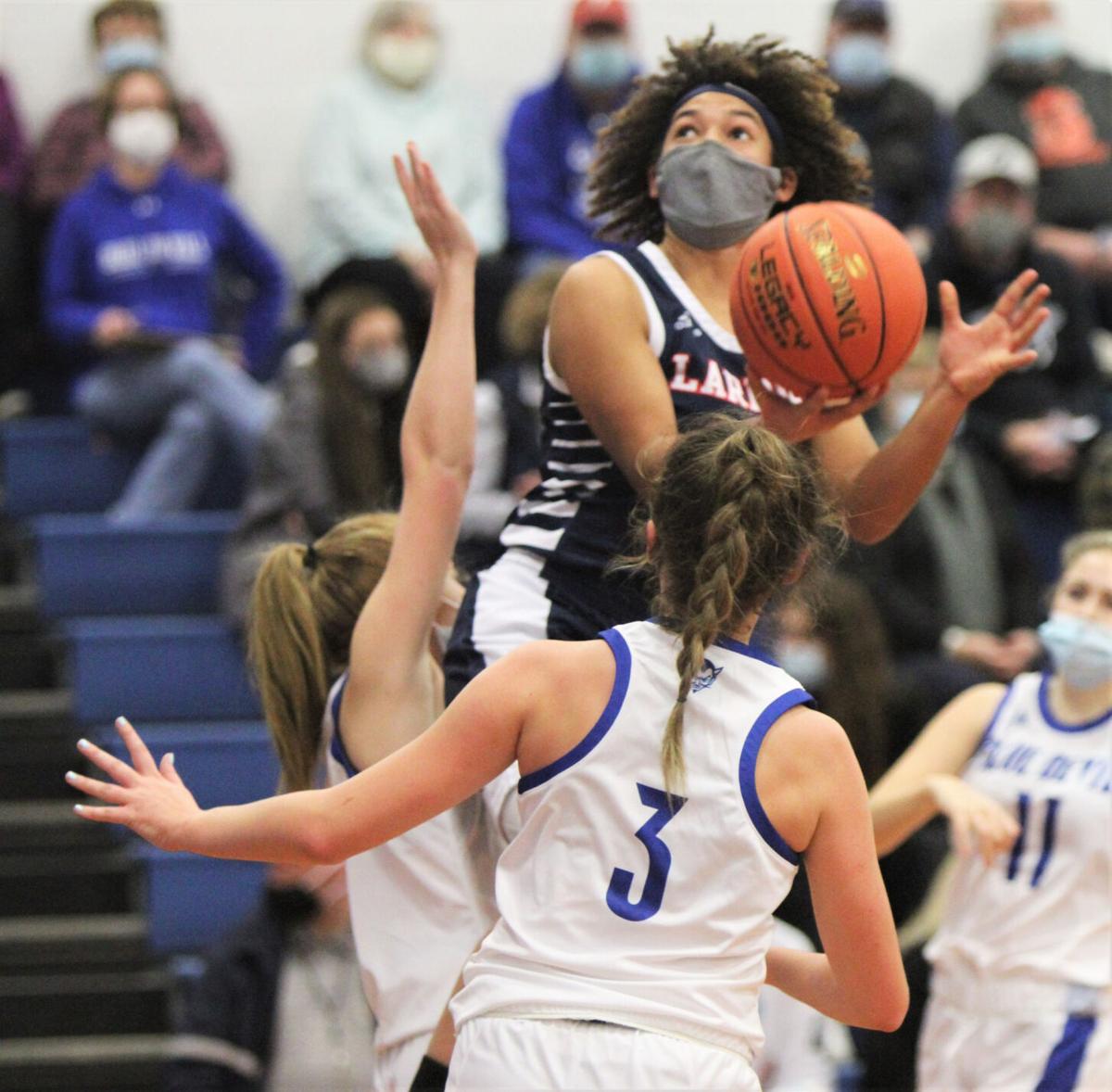 St. Lawrence Central struggled to keep OFA’s Abby Raven and Olivia Merrill away from the basket and the Blue Devils struggled to protect the ball from the swarming SLC defense led by Rylee Daoust and Jessica Horner in an NAC Central Girls Basketball game on Thursday.

In duel of opposing strengths which produced a series of mood swings, OFA started with an 8-0 run, SLC answered with a 32-20 halftime lead, warded off a second half rally by the Devils and pulled away from a two-point lead to gain a 56-48 victory led by a smooth 29-point effort by Daoust.

“And when we got their lead down to four points in the fourth quarter we couldn’t get the defensive stop to pull even. They shot their free throws well and (Rylee Daoust) really had a nice game for them.”

Abby Raven and Olivia Merrill each scored 20 points in the low blocks for OFA (3-4, 2-2) which honored its three seniors Brinley Frederick, Olivia Liebstein and Caitlin Kelly and their parents in a Senior Night ceremony before the game.

“Thank you for joining us on this special night to honor three players who have made our program better. Everyone here appreciates their dedication and hard work. On behalf of our entire coaching staff and team, we would like to recognize them and their parents,” said Coach Loffler.

Frederick scored six points on the night and Zoey Williams added two on a nice reverse layup along the baseline.

Daoust buried two 3-pointers and went 4-4 from the free throw line scoring 12 of the Larries’ 14 points and combined on a wave of transition scoring with Jessica Horner (8 points), Kalissa Young (7 points) and Jocelyn Moreau (4 points).

“We work very hard on our defense and fast break and the girls really did a great job tonight. We had two players out because of COVID which really hit our school hard today,” said SLC Coach Jenna Chamberlain.

“Abby Raven is always a tough matchup for us and Rylee Daoust really had a great game for us running the offense.”

Gouverneur 48 - Canton 40: The Wildcats (3-0, 6-3) used the committee system on offense and defense to gain a key win over the Golden Bears (4-4, 3-3). Seven different players scored in a decisive third quarter where Gouverneur gained a 17-11 advantage.

“As always Canton is very good. They are very well coached and they play hard. Tonight was a battle. We were down a score at halftime and we knew all week that it would be a fight to the end. We just had to keep reminding ourselves to fight through the tough patches in the game and trust in what we are doing. And we were able to finish the game with a win,” said Gouverneur Coach Sean Devlin.

“We have had two big wins this week and that is simply a reflection on the work and effort our team has put in. We still have a lot of work to do and a long way to go, but we are slowly starting to figure out what we can and can’t do. And our girls are really starting to believe in each other, and that is the key to everything.”