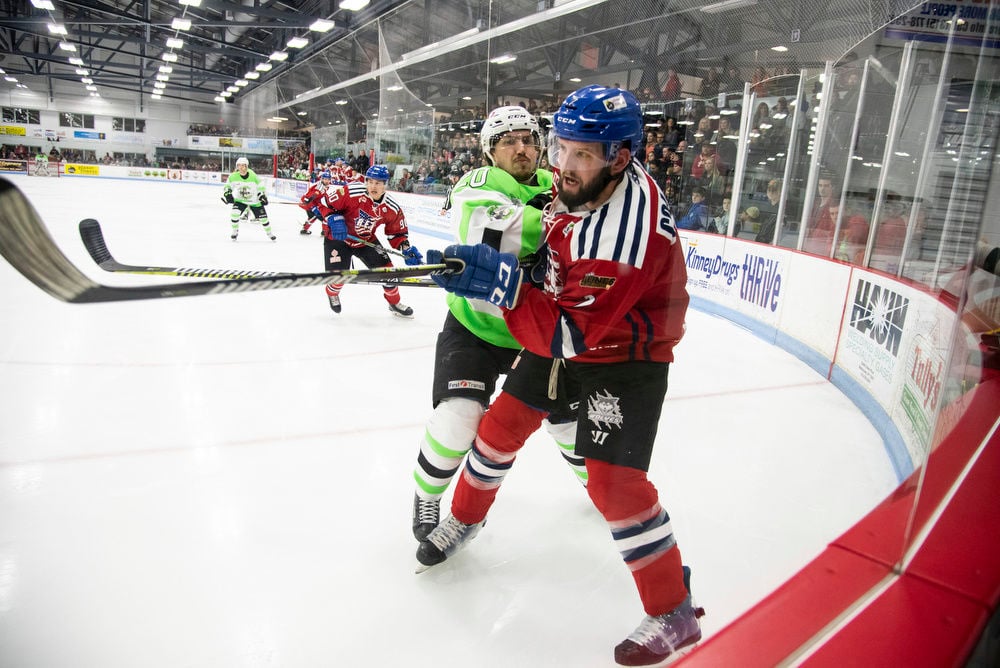 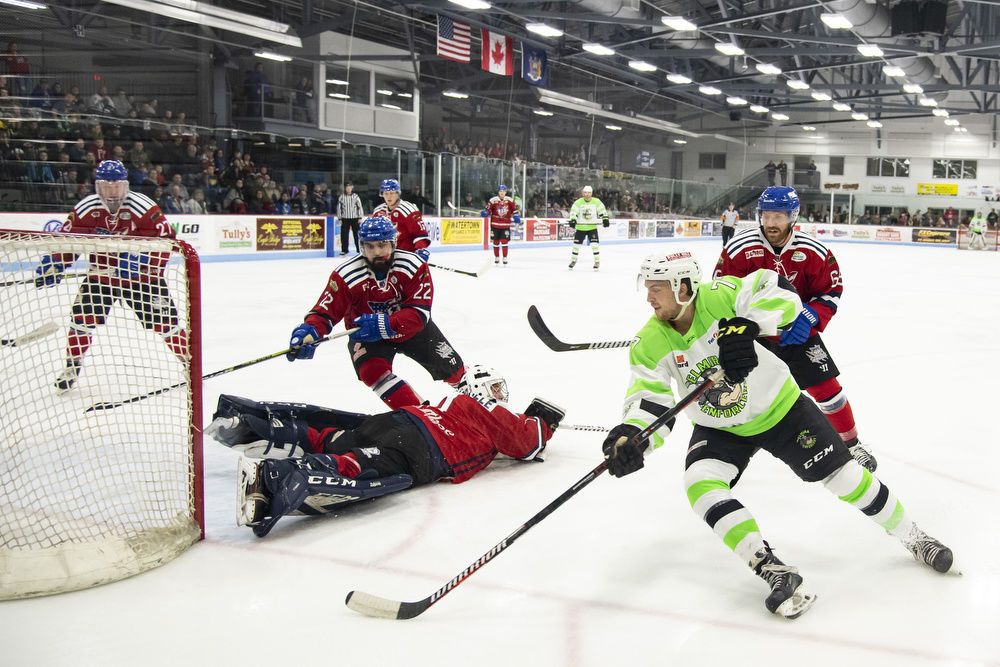 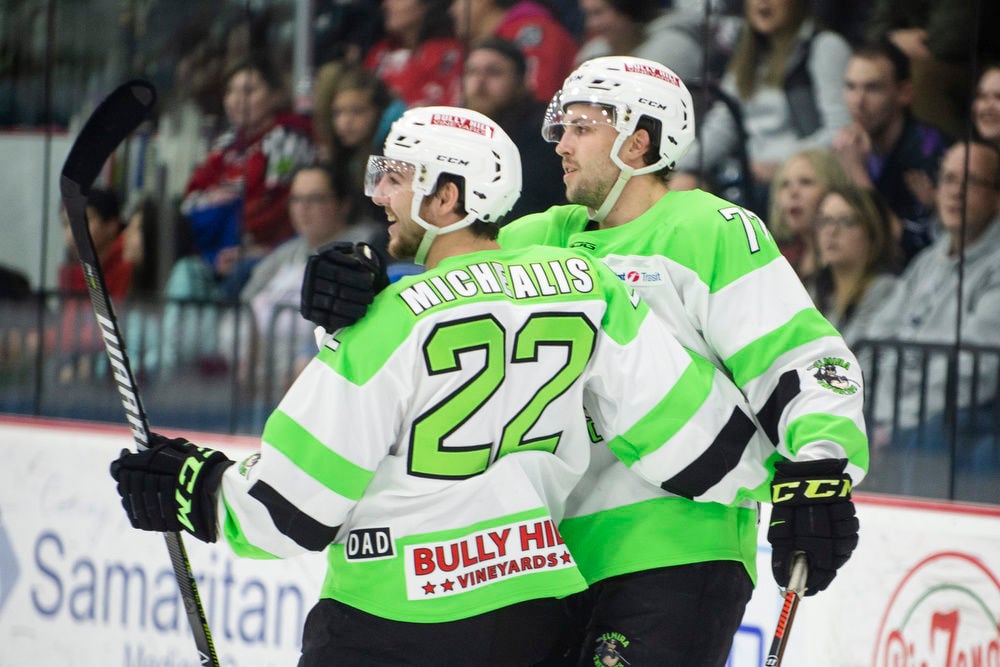 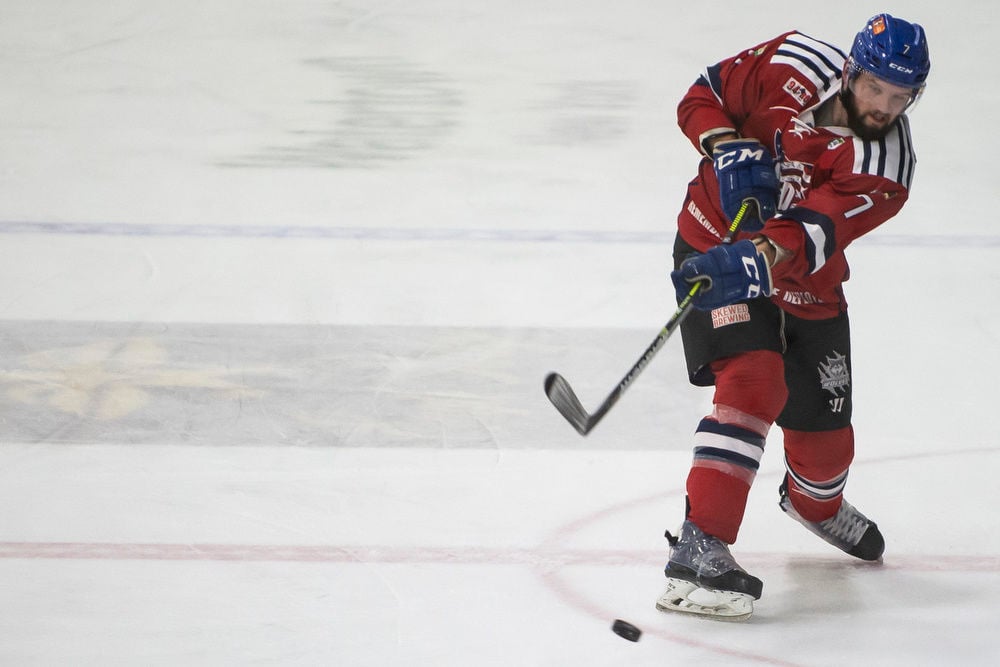 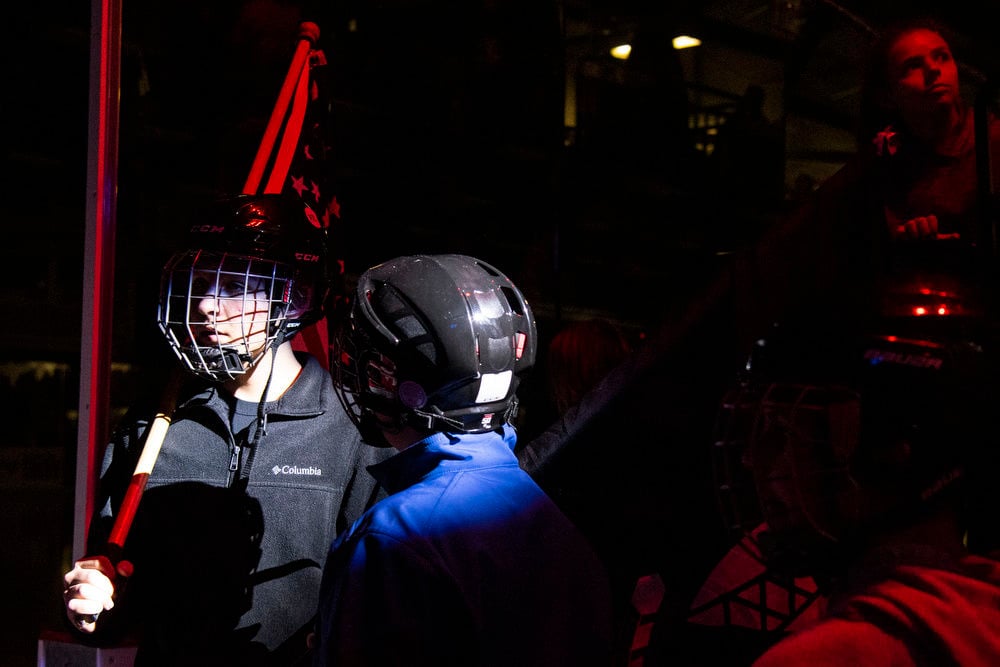 Flag bearers wait to take the ice for the national anthem before the start of the Watertown Wolves’ game Friday against the Elmira Enforcers at the Watertown Municipal Arena. Emil Lippe/Watertown Daily Times 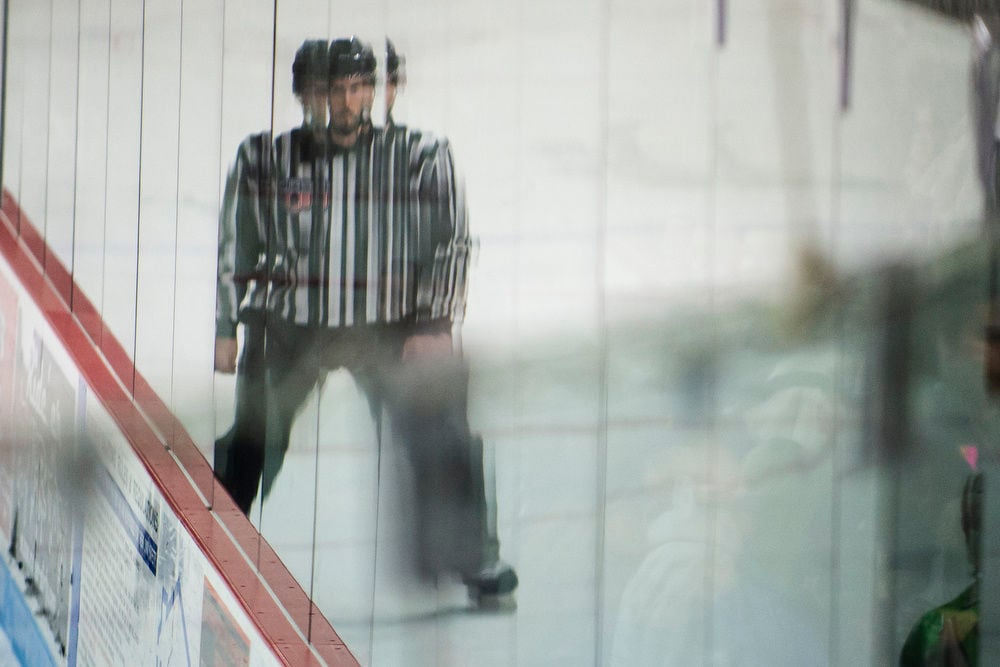 A referee watches for penalties during the Watertown Wolves’ game against the Elmira Enforcers at the Watertown Municipal Arena. Emil Lippe/Watertown Daily Times 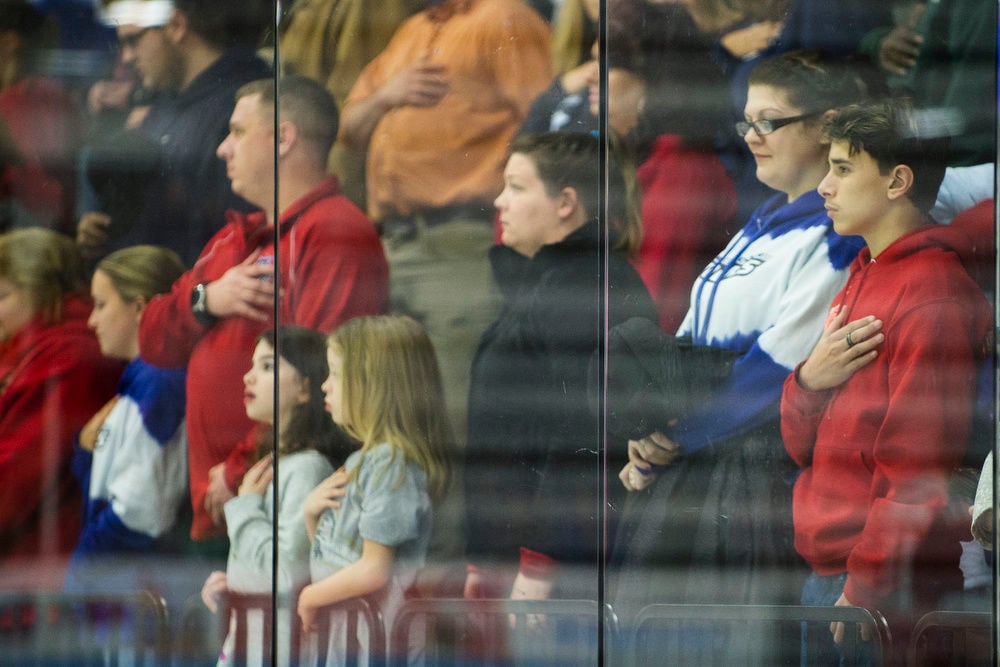 Fans hold their hands over their hearts for the national anthem before the start of the Watertown Wolves’ home game Friday against the Elmira Enforcers. Emil Lippe/Watertown Daily Times 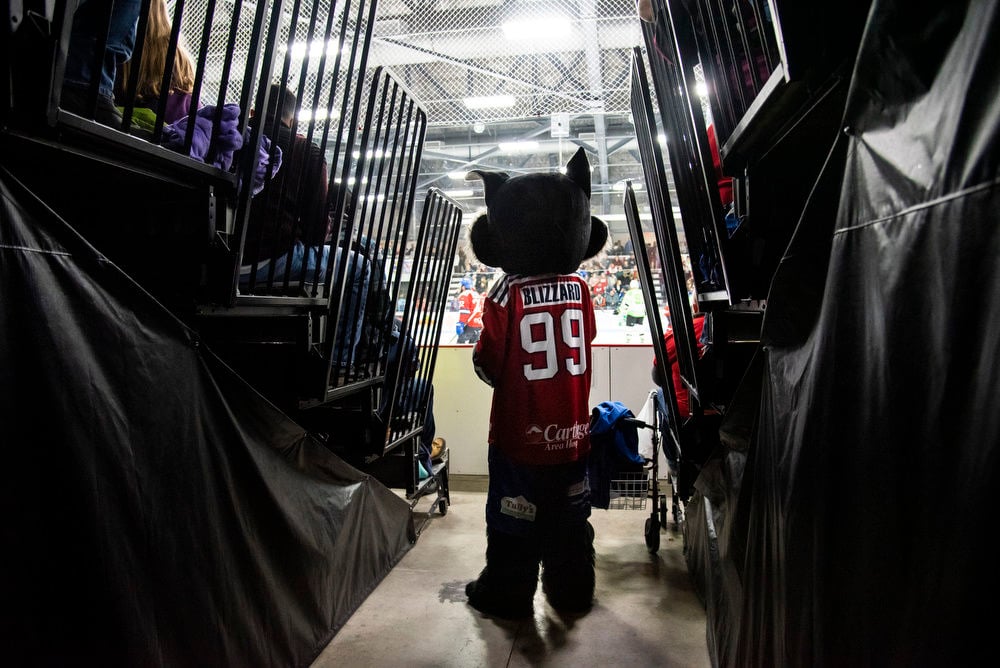 Watertown mascot “Blizzard” watches the game in between the bleachers against Elmira at the Watertown Municipal Arena. Emil Lippe/Watertown Daily Times 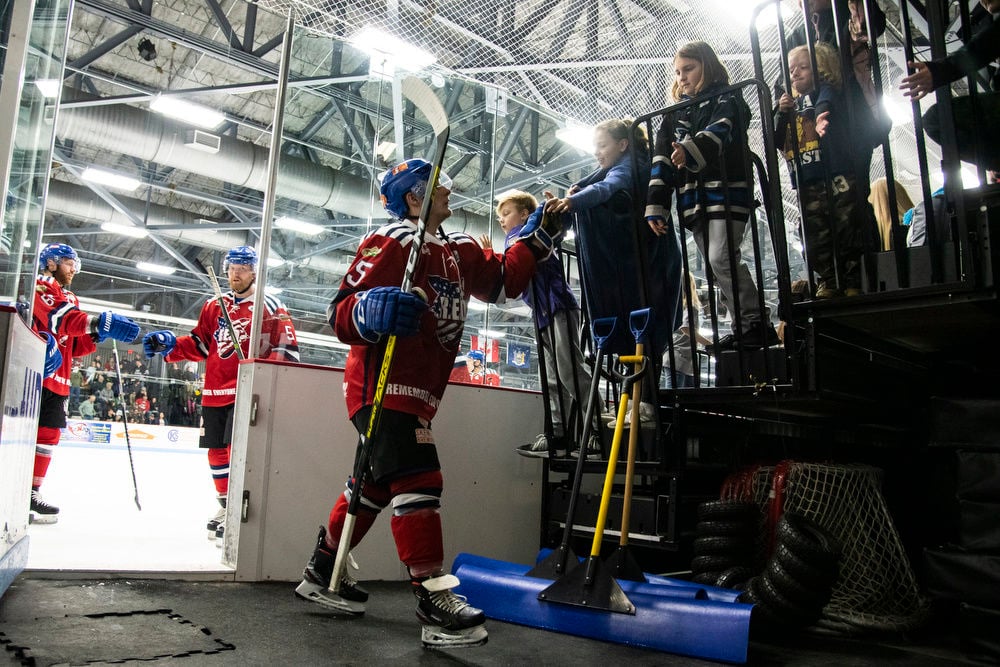 Flag bearers wait to take the ice for the national anthem before the start of the Watertown Wolves’ game Friday against the Elmira Enforcers at the Watertown Municipal Arena. Emil Lippe/Watertown Daily Times

A referee watches for penalties during the Watertown Wolves’ game against the Elmira Enforcers at the Watertown Municipal Arena. Emil Lippe/Watertown Daily Times

Fans hold their hands over their hearts for the national anthem before the start of the Watertown Wolves’ home game Friday against the Elmira Enforcers. Emil Lippe/Watertown Daily Times

Watertown mascot “Blizzard” watches the game in between the bleachers against Elmira at the Watertown Municipal Arena. Emil Lippe/Watertown Daily Times

WATERTOWN — Ahmed Mahfouz continues to do some of his best work against the Watertown Wolves.

Mahfouz, a longtime Watertown hockey nemesis, had a hand in all of Elmira’s goals, including scoring twice in the opening period, as the Enforcers held off the Wolves, 5-4, on Friday night in a Federal Prospects Hockey League game before a season-high home crowd of 1,241 at Watertown Municipal Arena.

“It’s tough to beat someone in their own barn and they’re a good hockey team on home ice,” Mahfouz, a veteran forward who has played in all 10 seasons in the league, said of Watertown. “So we just had to make sure we kept our legs going after they got the first goal. We just started rolling after that.”

Coming off worst loss of season the night before, Watertown hung with Elmira all night, but ultimately didn’t have an answer for their Eastern Division rival.

“We gave up those three soft goals in the first period,” Wolves winger Tyler Gjurich said. “In the second half of the game, I feel like we controlled the game and worked hard. We just came up a little short.”

“We’ve just got to be strong in front of our own net and protect the house,” Watertown defenseman and team captain Kyle Powell said. “We’re doing a better job, but we’re not there yet.”

Gjurich scored a power-play goal with 2 minutes and 30 remaining in regulation, but the Wolves got no closer.

“That’s what they do,” said Mahfouz, who totaled two goals and three assists. “Gjurich is out there and he gets one opportunity, and he puts it in the back of the net. So we were lucky we had a two-goal lead there, we can’t take penalties late in games.”

“It’s always nice to score quick like that, especially in the last few minutes,” Powell said. “But again, it comes back to we’ve got to have better jump on the next shift and we’ve just got to fix that for the future.”

Watertown coach Paul MacLean didn’t fault his team’s effort after they were routed at Danbury, 8-1, on Thursday.

“(Thursday) night was a tough one,” he said. “But I thought we battled tonight. ... It’s really about how you handle the adversity, you’ve got to put your nose to the grindstone and work that much harder.”

“It’s always there, basically our team battles to the end every game,” Gjurich said of the team’s effort. “We’ve just got to cut down on a few mistakes and we’ll be good.”

The Wolves (14-12), who started this season strongly, were lost their third straight and are in search of consistency at season’s midpoint.

“(Thursday) night was rough,” Powell said. “You never want to lose a game by that kind of score, but we had a little bit of a bounce back here. We just have to play a full 60 minutes, that’s all.”

Meanwhile, Elmira (13-13) won its second straight game, defeating the Wolves after losing at Watertown, 8-4, on Dec. 30.

The Enforcers, who lead the season series 3-1, also defeated the Wolves in the opening-round of the league playoffs last April.

Watertown holds down second place in the division with 44 points and Elmira now has 38 points.

“It’s a huge win,” Mahfouz said. “Their our division rival and they’ve been our rival since last season now. Every time we play, we know what kind of game it is and they’re nice ones to win.”

With Elmira leading 4-3 heading into the third period, Mahfouz set up what would be Dmytro Babenko’s game-winning goal with 11 minutes remaining in regulation to build another two-goal lead.

Gjurich scored six seconds into the power play, as finished off a feed from Powell after Deric Boudreau had won the faceoff to get Watertown within a goal.

“We made it interesting, we got that power-play goal late in the game,” MacLean said. “And their fifth goal was tough, that was on a deflection.”

The Wolves then pulled goalie Jeremy Pominville (22 saves) twice in the closing minutes, but didn’t manage a shot on goal the rest of the way.

With his team leading by a goal through the opening period, Hudson Michealis scored a power-play goal 4:24 into the second period for a 4-2 Elmira lead with the Enforcers on a two-man advantage.

Watertown pulled within 4-3 with 6:04 left in the period as Powell converted on a pass from Gjurich.

The Wolves led 1-0 on Dominik Bogdziul’s goal 2:18 into the game as he broke in alone and slid a backhander past Passingham. But Watertown’s fortunes quickly went south as Mahfouz and Michealis each scored within a span of only 24 second as Elmira seized a 2-1 edge. After Mahfouz tipped in a Brandon Tucker drive, Michelais scored at 3:26 on the Enforcers next trip into the Watertown zone.

Mahfouz struck again for a 3-1 advantage 7:33 into the period as Tucker’s shot deflected off Mahfouz and past Pominville. The Wolves drew within 3-2 on Cole Sonstebo’s power-play goal with 1:55 remaining in the opening period as he scored from the right faceoff circle, with Powell assisting.

The Wolves and Enforcers square off again at 7:30 tonight at the Fairgrounds arena.

n NOTES: Watertown has now lost 10 of 15 games against Eastern Division opponents. ... Powell is wearing a full face shield after he took a puck to the face last weekend. ... Longtime Thousand Islands and Watertown Wolves enforcer Chase Tippin made his return to the Wolves after signing with the team earlier this week. Tippin took his first shift of the game with 8:32 left in the second period. ... MacLean said that defenseman Justin Nattress, the son of former longtime NHL defenseman Ric Nattress, will rejoin the Wolves next week. Watertown signed him last week and he made his team debut Jan. 4 in a game at Columbus.