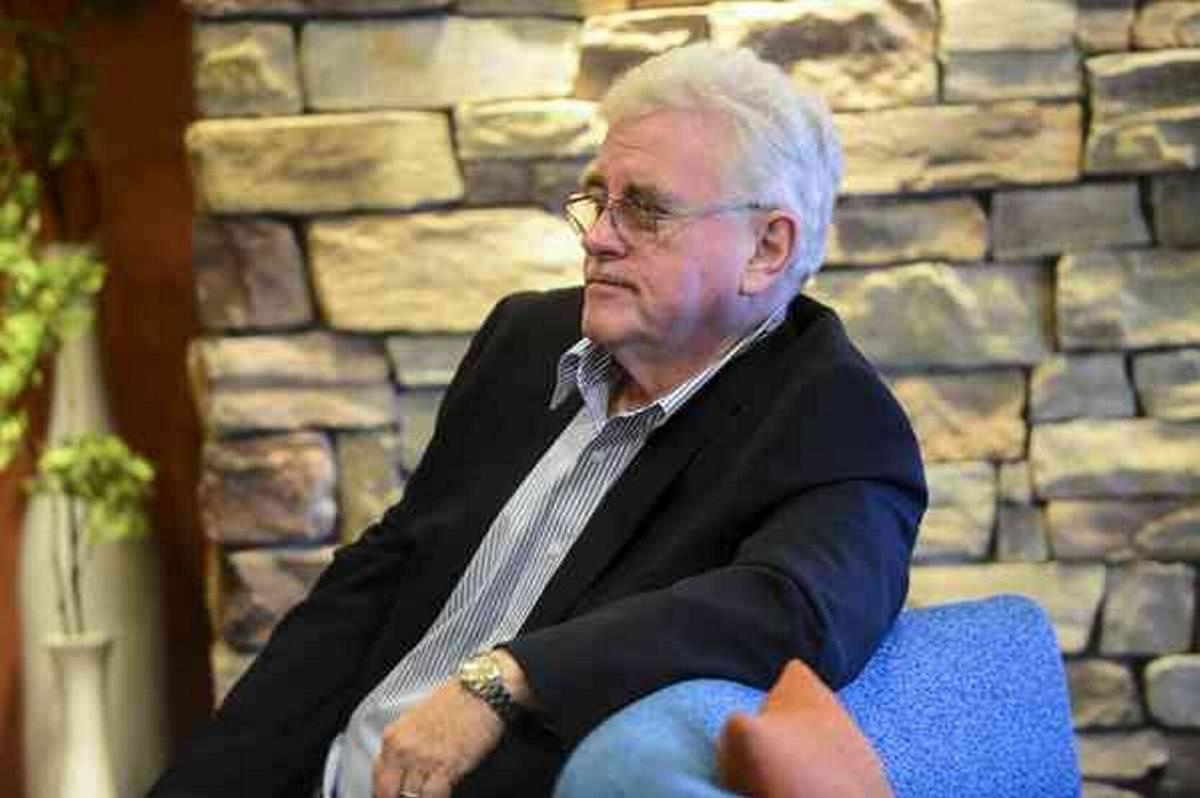 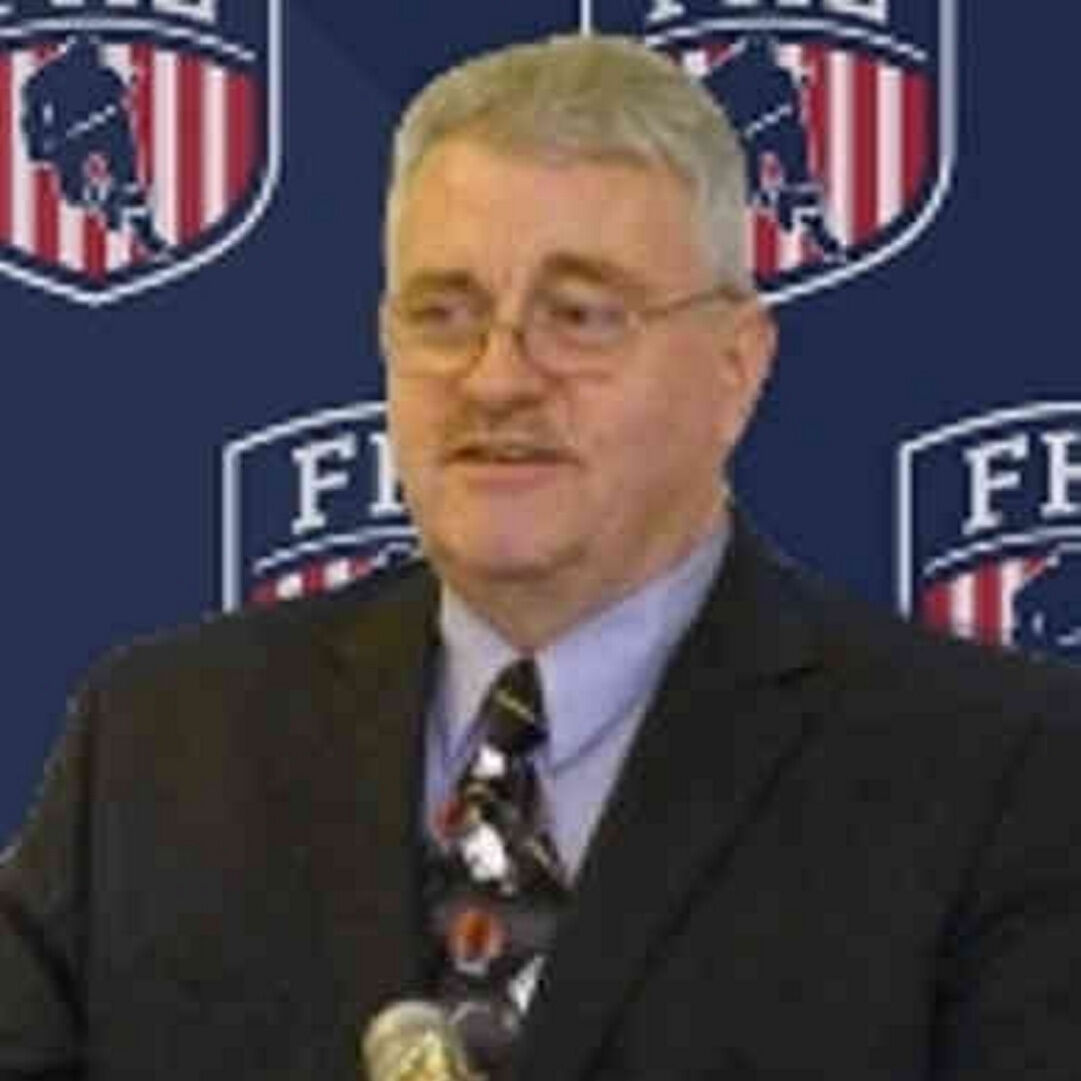 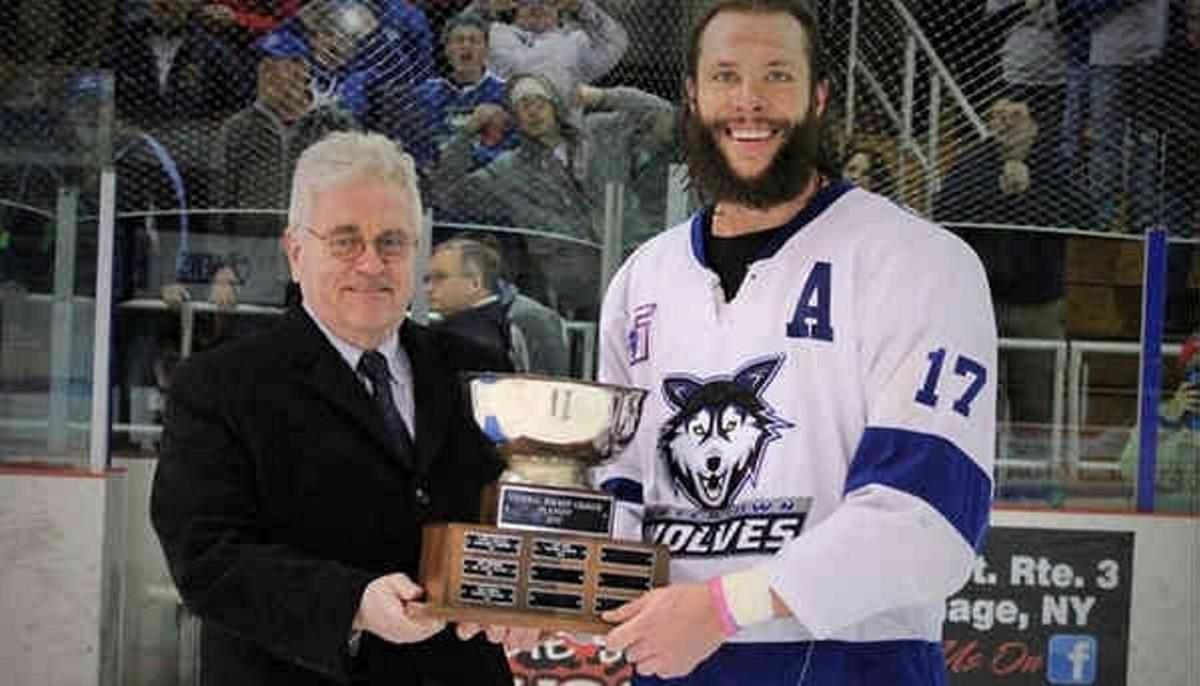 FPHL Commissioner Don Kirnan, left, presents the league playoff MVP award to Cody Dion of the Watertown Wolves after the Wolves won the league championship in March 2015 in their first season in the league. Watertown Daily Times

FPHL Commissioner Don Kirnan, left, presents the league playoff MVP award to Cody Dion of the Watertown Wolves after the Wolves won the league championship in March 2015 in their first season in the league. Watertown Daily Times

It’s been a tough offseason and summer for minor-league hockey and the Federal Prospects Hockey League’s situation has been no exception.

Yet league commissioner Don Kirnan is cautiously optimistic that the circuit, including the Watertown Wolves, will return to action this year with plans point toward a December start.

The emergence of the coronavirus pandemic stopped all of professional sports in its tracks in March, including all of hockey, from the NHL on down.

“It was very bad for us, obviously everything shut down in a matter of 48 hours,” Kirnan said. “The schedule in Watertown was they were mostly on the road and weren’t devastated with their games lost in the regular season. Of course we were devastated with the playoff games that were lost, but there were a lot of teams that had a lot of home games that they just lost with the schedule being wiped out.”

But Kirnan and the league’s team owners vowed to carry on and have done so since.

Kirnan is hopeful the FPHL, which will be entering its 11th season, will get under way in early December, a start time other leagues have targeted as well.

“We’re just trying to make the best of it and we’re trying to hold it all together,” he said. “And the other issue is the players, we’re trying to get them coordinated, they’re all used to playing this time of year and in October and now we have to make adjustments for that. And now it’s going to be six, seven or eight weeks later, so it will be a condensed season.”

If all goes well, Kirnan envisions a regular-season schedule of about 50 to 52 games, with the playoffs starting in the spring as usual.

“We’re going to play a few less games, but we’re going to get as many games as we can with the shorter season and hope that everything works out,” Kirnan said.

The FPHL is targeting its team training camps to begin in November with the season openers taking place the first week of December.

“We’ve got to push everyone back so they’ll be coming in around a week or so before Thanksgiving and they’ll get ready for the season then,” Kirnan added. “I think that’s pretty much the plan.”

A major issue now facing the FPHL, as well as other leagues in minor-league hockey, is whether fans will be allowed to attend games, in any capacity, once the season begins.

“Our biggest issue within the league is capacity,” Kirnan said. “You have football starting up right now and they’re talking about various capacities, we’ll see how that works out. In some areas it’s 20 (percent), some it’s 50 (percent), whatever the case may be.

“We’re obviously at the start of September, so there’s going to be a lot of football games before we’re thinking of starting up in December. So we’re thinking that there may be some provisions for larger crowds.”

A FPHL season likely wouldn’t be sustainable for long without drawing fans to its home arenas.

“Every level has to have fans, and it’s critical for us, too,” Kirnan said. “Only major-league sports can go on without fans, even the second level, the American Hockey League, can’t operate without them. Obviously in Syracuse, they shut down Triple-A, and Major League Baseball shut down the entire minor-league system, and there wasn’t any baseball in Watertown this year, either.”

Kirnan is hopeful of a vaccine being developed in time to be effective in the fall,

“Ideal-wise, hopefully by November they’ll be a lot of the vaccines out and the question is will they allow everybody to attend these games at night,” Kirnan said. “And I hope everything goes right and we get back to normal.”

The FPHL lost a franchise when the expansion Battle Creek Rumble Bees folded during the offseason. But the league will enter the season with a 10th team, as the Motor City Rockers, which is based in Fraser, Mich., in suburban Detroit, has joined the league.

The Wolves, who will be entering their sixth campaign in the league, will play their first with new owner Andreas Johansson, who purchased the franchise in the spring.

“He’s definitely somebody we felt was the right guy,” Kirnan said. “We talked to him for a while and I think Watertown is going to be well served by him.”

The Wolves, who also won the league title in the 2018-19 season, lead the circuit in championships. Watertown will once again play in the Eastern Division with rival Elmira, as well as Danbury, Mentor and Delaware. Motor City will be placed in the Western Division, along with Michigan foe Port Huron, as well as Carolina, Danville and Columbus.

A franchise in Bloomington, Ill., was to join the FPHL for the upcoming season, but because of the coronavirus, the currently unnamed team has pushed back its debut in the league for the 2021-22 season.

“We have a lot of things that we are working on,” Kirnan said. “I know the fans and the supporters are gung ho and they can’t wait to come to the games and know there’s a lot of people that can’t wait to get everything started. But everything’s kind of been in like suspended animation for the whole league.

The FPHL has also sought out potential expansion teams for the league in cities down south such as Memphis and Biloxi, Miss.

For now, Kirnan is enjoying watching pro sports, including baseball and the NHL playoffs.

“They’re playing in a bubble and they’re doing what they have to do,” Kirnan said of the NHL. “I’m happy they’re playing sports and I’m a big sports person.”