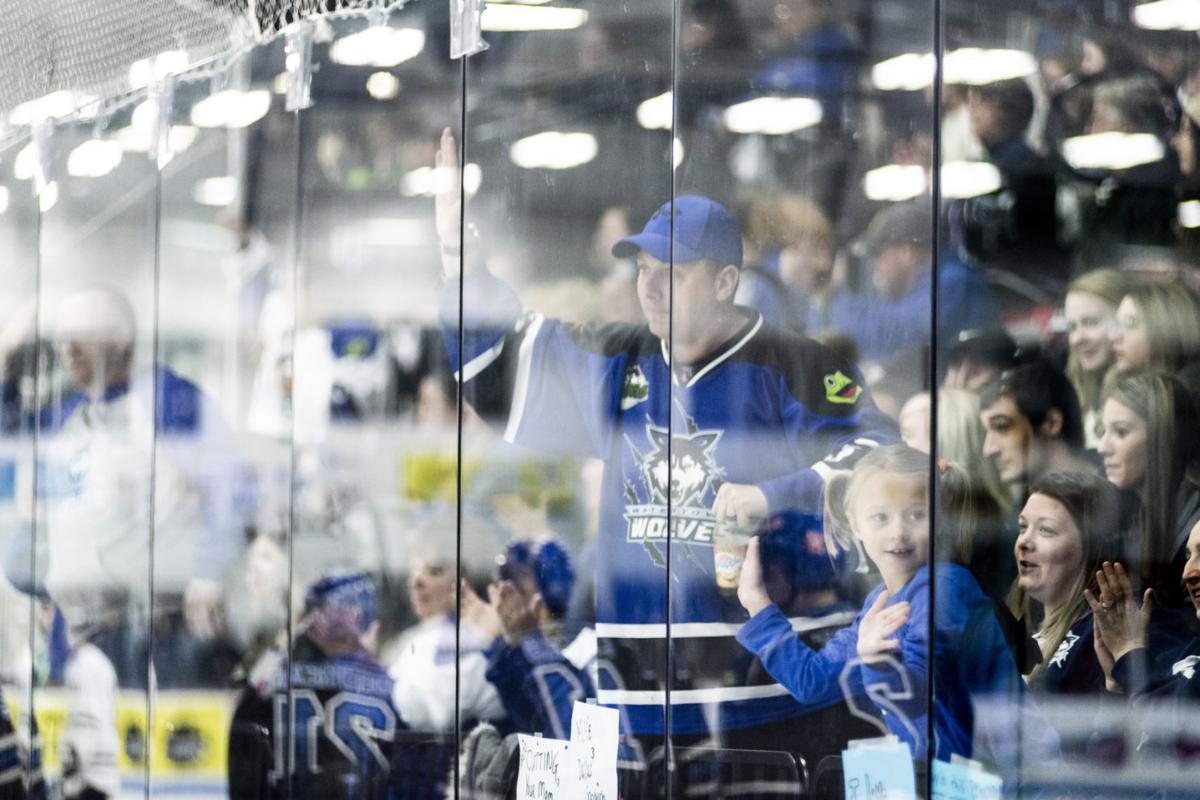 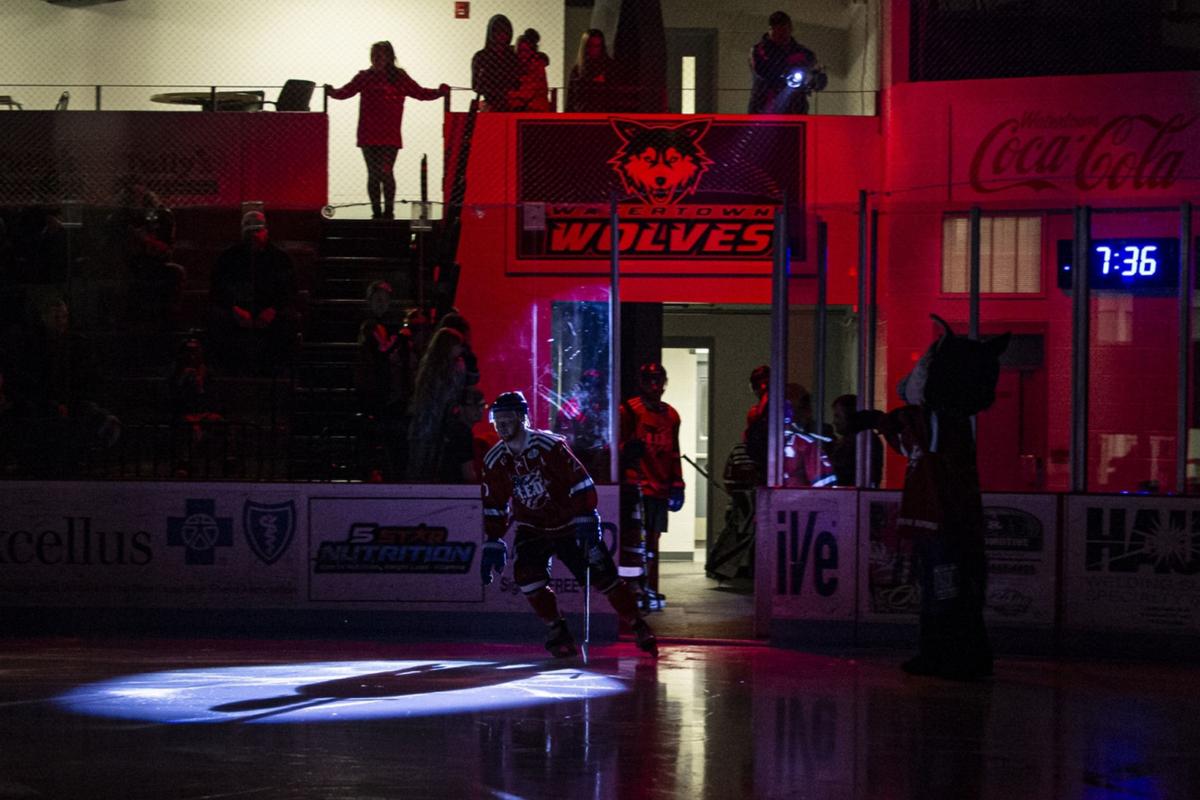 Players are introduced as they make their way onto the ice during the Watertown Wolves’ game against the Carolina Thunderbirds on Feb. 29 at Watertown Municipal Arena. Emil Lippe/Watertown Daily Times 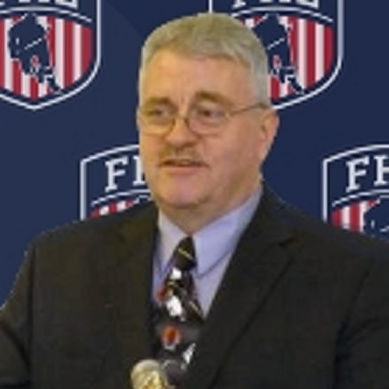 Players are introduced as they make their way onto the ice during the Watertown Wolves’ game against the Carolina Thunderbirds on Feb. 29 at Watertown Municipal Arena. Emil Lippe/Watertown Daily Times

Even with the Federal Prospects Hockey League shutting down early because of the coronavirus pandemic, league commissioner Don Kirnan says this has been their best season ever.

With expansion last year, the league grew by four teams to 10 franchises, coinciding with the circuit’s 10th year of existence.

The league welcomed back one city to the fold in the Danbury Hat Tricks in Connecticut and also took in three others communities in the Delaware Thunder, the Columbus River Dragons in Georgia and the Battle Creek Rumble Bees in Michigan.

With the new entrants, plus six teams that returned to the league for the season, including the Watertown Wolves, the league drew more than a quarter of a million fans in the shortened season.

“It was our best season, we drew probably 350,000 fans from a league standpoint, so that’s very successful,” said Kirnan, who added that’s approximately 100,000 more than any other FHL season.

The Watertown Wolves played at the Elmira Enforcers on March 12 on a Thursday night, and the game proved to be the last pro hockey game to take place in North America as during the game the league announced it was suspending its season. Four days later, the league announced it had canceled its season, as four weeks of the regular season as well as three rounds of playoffs were wiped out.

“Nobody’s gone through this before,” Kirnan said of the coronavirus pandemic. “I’m older, so I remember when the president was assassinated and we all remember 9/11. This seems to be worse than anything I’ve seen in my lifetime, so it seems to be really crazy times right now.”

Kirnan and the FPHL saw no other way to continue the league this season and took the lead of the other pro hockey leagues in shutting down.

“I think as things turned out, we were mandated by the state to restrict capacity and it would have been impossible for us to carry on,” Kirnan said. “We’re dealing in multiple states, like in Michigan, they were allowing nobody until the middle of April and certain other states were restricted down to 100 or 200 people.

“No. 1, I think that a lot of people were concerned about the safety of going to games anyway and in New York we were at 500 (people allowed) when we shut down, I think it’s down to 50 right now.”

“We decided it’s just better to suspend operations at the time,” Kirnan added.

The FPHL sits on the lowest rung of the pro hockey ladder in the minor leagues, behind the Southern Professional Hockey League, the East Coast Hockey League and the American Hockey League.

“I know some other franchises and teams in the minor leagues have taken a hit of almost a million dollars with the shutdown,” Kirnan said. “So it’s just been a disaster for everybody, really.”

Still, even with the money lost across the FPHL because of the shutdown, Kirnan was optimistic about the future of the league.

“It’s never been better,” Kirnan said of the league. “Obviously we’re happy with the direction of the league, it’s going great.”

“Carolina’s attendance went up, Elmira’s was pretty much what they had the year before, so we had some strong teams. Getting Danbury was great,” said Kirnan, who also owns the Wolves franchise. “We had some big turnouts and a lot of positives as far as that goes.”

Kirnan said the Wolves are standing on firm ground as well.

“Everything is good, everything is solid,” Kirnan said. “The last two years are the only years where there hasn’t been a huge loss.”

In fact, Watertown has made money the past two years and is one of eight teams in the league to finish in the black this season, Kirnan said.

“Last year, Mentor didn’t break even, this year it was Mentor and Battle Creek, everybody else was OK,” Kirnan said. “Which is unheard of in minor-league sports where 70 or 80 percent of the teams don’t make money. So this is two years in a row that we’ve done pretty well and Battle Creek was a last-minute entry.”

Kirnan is also pleased and encouraged with the attendance in league cities like Columbus, where the Columbus Civic Center sports a capacity of 7,259.

“The Columbus facility had one crowd over 5,000, which is almost three times what our building seats,” Kirnan said of the Wolves seating capacity of 1,500 at Watertown Municipal Arena.

At present it’s unclear whether there will be further expansion in the FPHL for next season.

One prime expansion candidate is in Bloomington, Ill., which would gave the state two league franchises along with the Danville Dashers.

Kirnan says the league will “probably be a 10-team next year,” but said anything can happen in terms of potential expansion.

“Things have really worked out well and I don’t know if we’re going to expand next year or not,” Kirnan said. “Some of the stuff going on right now, it’s hard to say because everything’s kind of in a lockdown right now, so business is not as usual and we can’t even do normal things right now.

“So it’s uncharted territory for everybody right now.”

He was also pleased with the balance of play in the league this season as eight of the 10 teams in the league would have competed in the playoffs.

“We had several teams that really felt they had a chance to win a championship, so the league was very competitive,” Kirnan said. “And who knows what would have happened?”