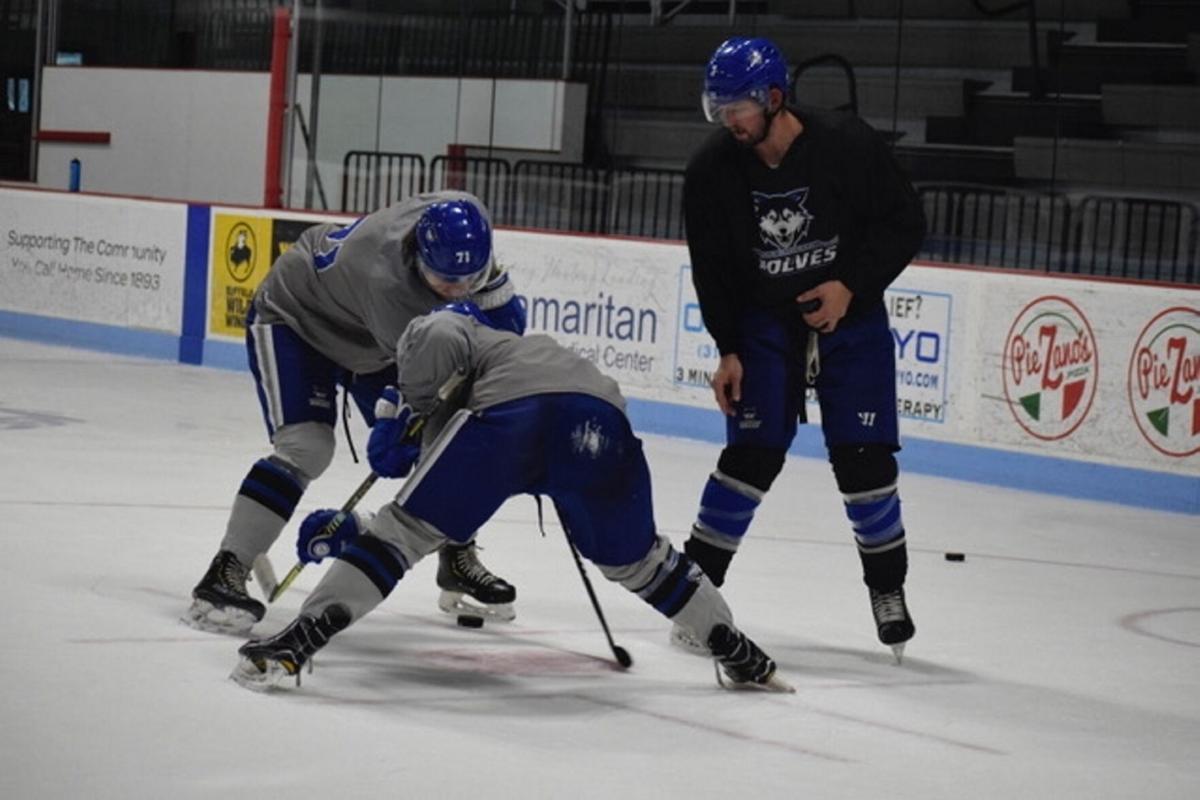 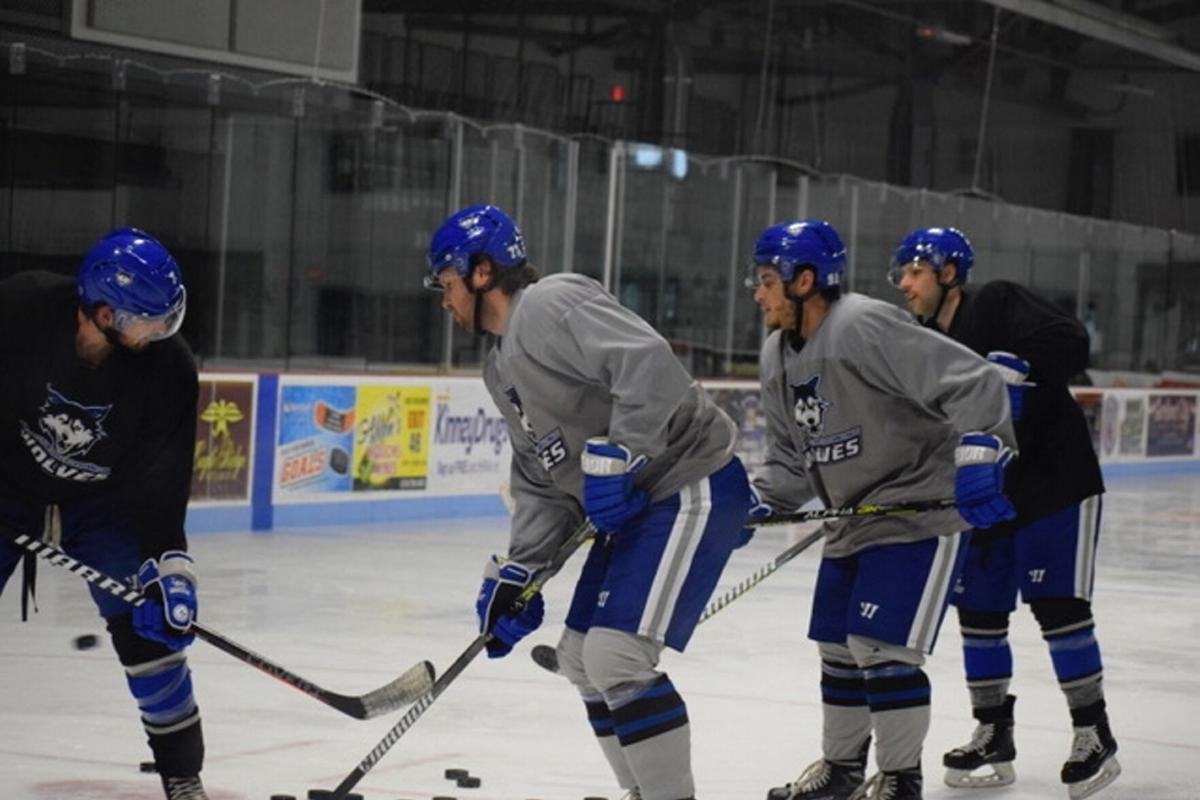 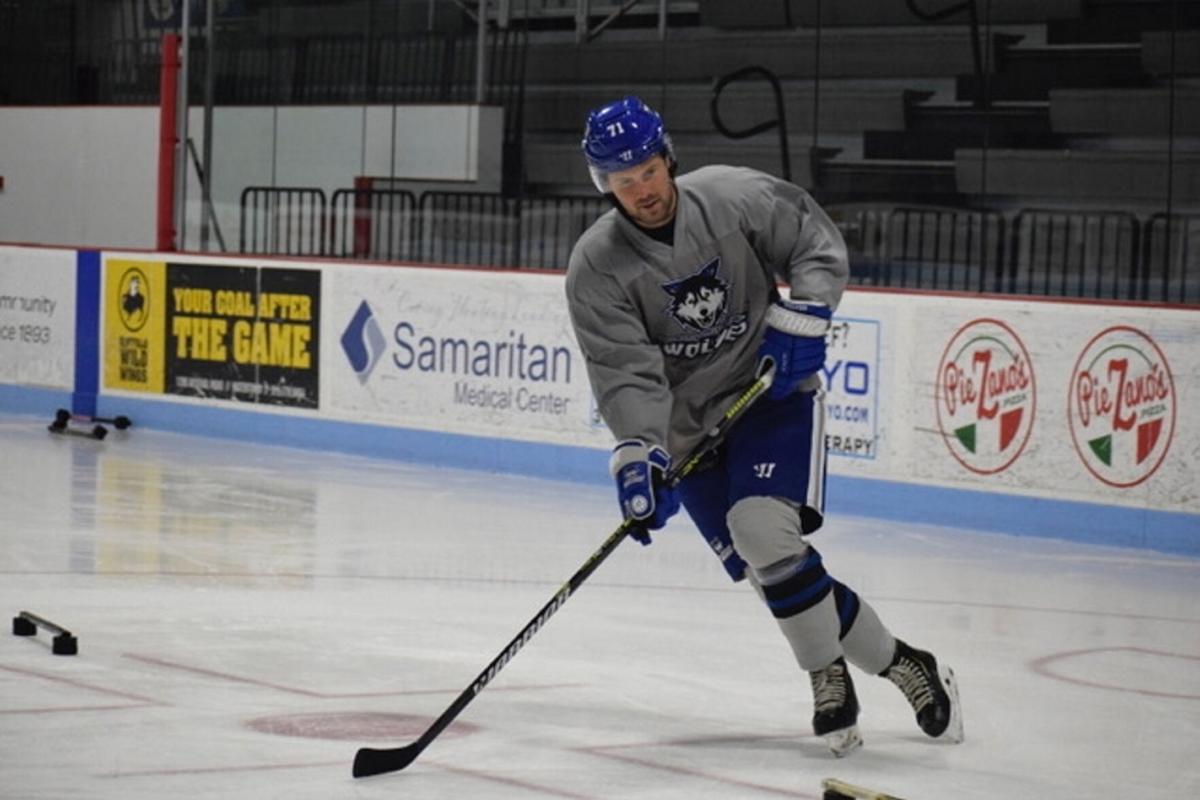 Tanner Hildebrandt of the Watertown Wolves skates during an unofficial and partial team workout on Friday at Watertown Municipal Arena. Provided photo 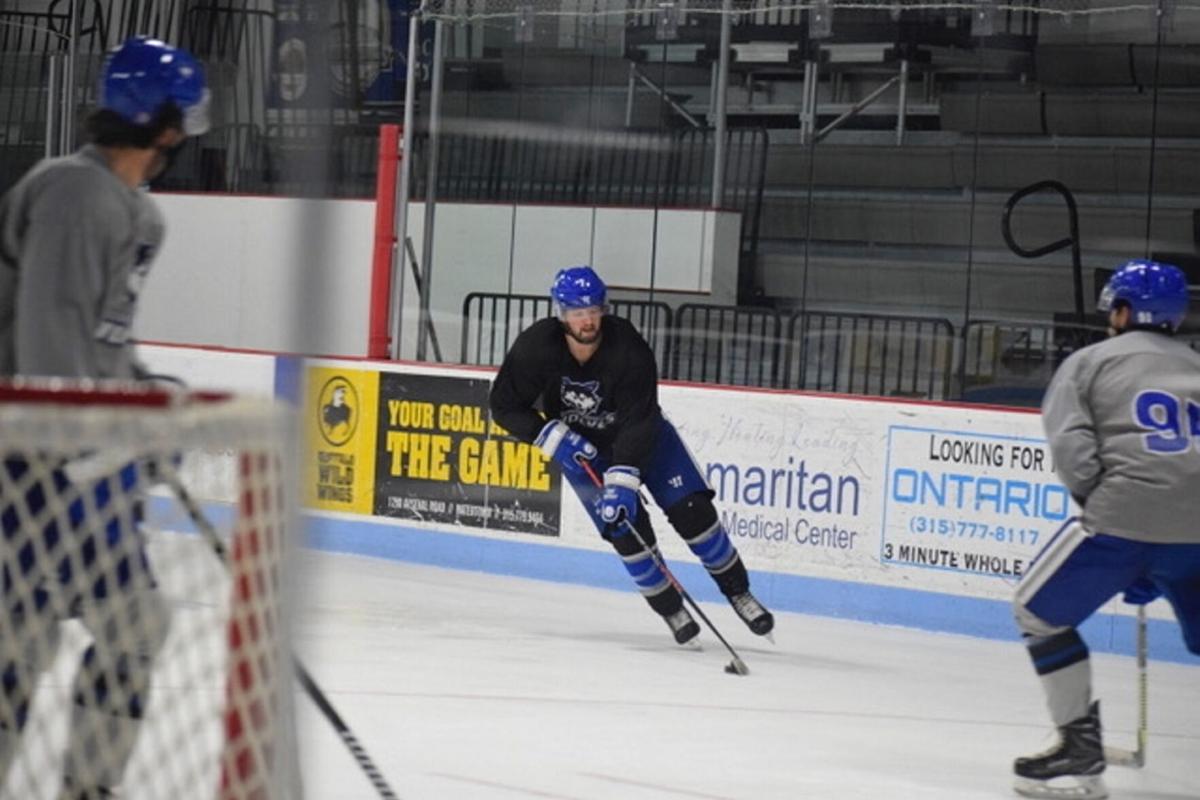 Justin Coachman of the Watertown Wolves skates during an unofficial and partial team workout on Friday at Watertown Municipal Arena. Provided photo 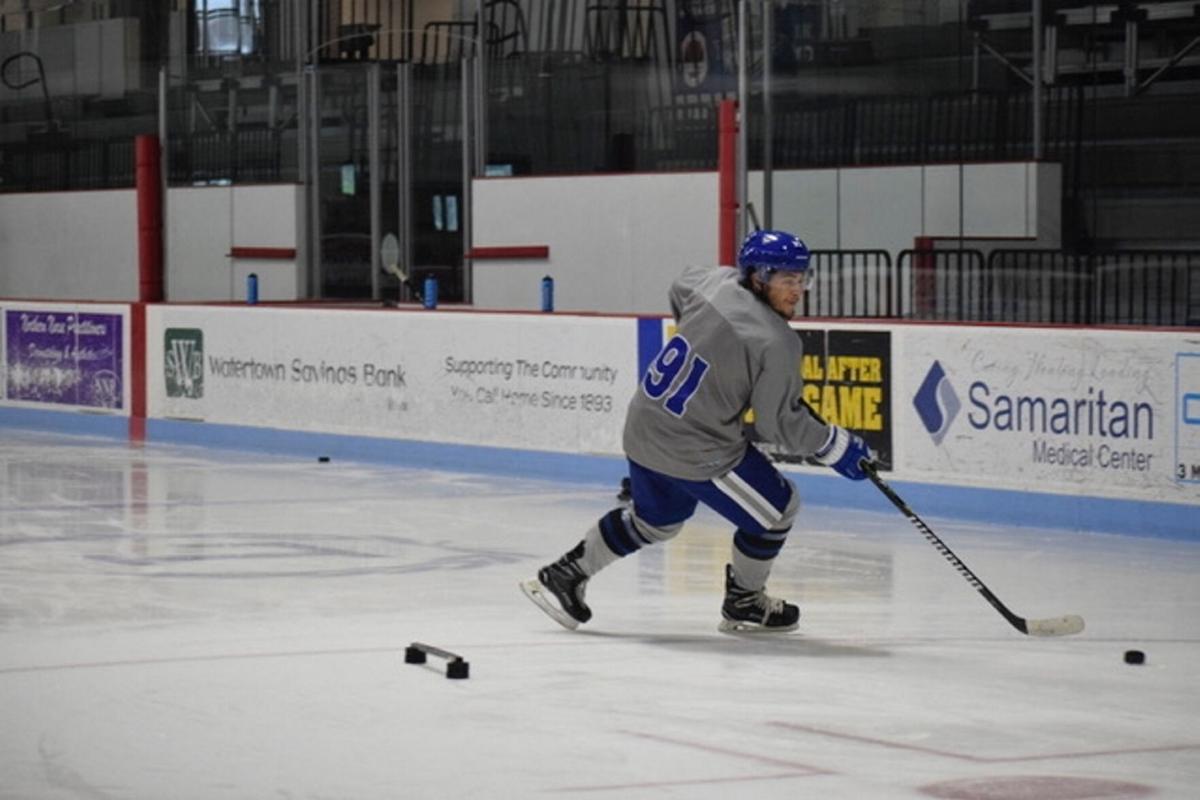 Tyler Bullard of the Watertown Wolves skates during an unofficial and partial team workout on Friday at Watertown Municipal Arena. Provided photo

Tanner Hildebrandt of the Watertown Wolves skates during an unofficial and partial team workout on Friday at Watertown Municipal Arena. Provided photo

Justin Coachman of the Watertown Wolves skates during an unofficial and partial team workout on Friday at Watertown Municipal Arena. Provided photo

Tyler Bullard of the Watertown Wolves skates during an unofficial and partial team workout on Friday at Watertown Municipal Arena. Provided photo

WATERTOWN — Justin Coachman and some of his Watertown Wolves teammates gathered last week to skate together at Watertown Municipal Arena.

Right now getting together for an informal practice is the next best thing to an actual hockey season.

With the Federal Prospects Hockey League’s campaign currently on hold because of concerns about the coronavirus, a handful of players skated on Friday morning.

“It’s going pretty good,” said Coachman, after about an hour skate with three other players. “It’s nice to get out here with some of the guys and skating every day, just trying to get back in shape for whenever the season starts.”

In an ordinary year, the Wolves would already be playing regular-season games in a slate that normally stretches from early November into April, with playoffs to follow.

But the league has yet to finalize a schedule and has set Dec. 18 only as a tentative start date for the regular season.

“We’ve got a tentative start date, but you just never know,” Coachman said. “Especially with some of the recent updates, like restaurants closing at 10 o’clock now, we’re just going to have to wait and see. But we’ll come out here and work every day just like the season’s going to start when it’s supposed to.”

If the date becomes reality, the Wolves would hold training camp in late November, they hope. But for now, Coachman, a veteran defenseman, is one of several players who are already in town and taking place in informal skates.

“It feels good, I’ve been here for about a month now,” Hildebrandt said. “Just trying to get my legs under me and a couple guys were here already, so it’s nice to get a little bit of chemistry going, too.”

Coachman, who has played the past three seasons with Watertown, lives in the area year-round in Dexter. As an assistant captain last season, Coachman led the workout on the ice Friday in the absence of Clarke.

“With this few guys, it’s more about some skill work, trying to work the hands and the feet, getting everything going,” Coachman said. “Working in close quarters and getting shots off and such, just trying to improve everything that we have to work on. As more guys come in, we’ll work on more positional aspects of the game.”

“It feels normal-esque, it feels good,” Bullard said. “It’s just been a long wait. I ended up leaving in April last year and heading back home. So just getting back in the area gives you a sense of normalcy, getting back to what we’re supposed to be doing and what we’re used to, so it’s a good feeling.”

Now 27, Coachman has been with the Wolves since his rookie year in 2018 when the Wolves won their second league championship.

“Especially since I’m getting older so I don’t have many seasons left,” Coachman said. “So if for some reason we miss this season, it’s like one extra year where I have to wait. I just want to go out and play hockey and get back to feeling normal again.”

Coachman spent much of the offseason working construction in his native Rochester before returning to the area after the summer months.

“It was all right, just working construction, so that was pretty normal considering the regulations here and there,” Coachman said. “We were still busy and I just worked and worked out to get ready for hockey.”

Hildebrandt, 28, is hoping to play in his third pro season, playing with Danville, Elmira and Watertown last season. He played with the Wolves to end the season, which concluded on March 12 when the team played its last game in Elmira.

“I came back a little earlier from surgery than I would have liked to and played a couple games,” Hildebrandt said. “I just didn’t feel like I was quite ready to go, so I just ended up finishing the year here with a couple games and they reached out to me this summer and asked me to come back.

“So I came back here and we’re just hoping now we’ll get a season this year.”

A native of St. Catharines, Ontario, Hildebrandt spent most of his summer back home, working in several hockey camps, including one run by his uncle.

“I got in here like the last week of October,” Hildebrandt said. “There’s been three or four of us here consistently every week, just skating and doing some skill work for what we can. Whatever we can do with a five-man unit, we work on that, and outside of that, just trying to hone our craft and get better.”

The Wolves played just 48 games last season as minor hockey leagues called off the remainder of their schedules in March. The Wolves last game was in Elmira, with no fans in attendance.

“We played that game in Elmira and it felt surreal with no fans there, you could hear the announcer from the press box during the game,” Coachman said. “And then just ending so suddenly, we didn’t have time to comprehend or decompress like we usually do at the end of the season. So it was weird, I felt weird, I felt like I was missing a lot of competition and such.”

With the playoffs nearly weeks away, Watertown had already secured a postseason berth, occupying third place in the East Division.

“I know for me personally, I felt this team was getting ready to go on a run last season, a playoff run,” Bullard said. “I thought we were getting to the point where we could be really dangerous, so I think a lot of us thought like we were robbed in a sense, so there’s that heightened energy that everyone is even hungrier to get back at it.”

Clarke, 34, was hired as head coach in the spring in the wake of last season. After guiding the Wolves to their first league championship in 2015 in his first head-coaching season, Clarke returns after coaching Elmira for the past two seasons.

The team also has a new majority owner in Andreas Johansson, the Wolves announced in May.

“It’s been fantastic, a complete transition from what we had before,” Coachman said. “It feels more like a professional organization now, Clarkie’s a great coach and he knows how to put a good team together and we’re already starting to see it.”

Said Hildebrandt: “I’ve had the opportunity to meet him and have a couple conversations. He seems like he’s all in, he wants to do whatever it takes to bring a championship back to Watertown and that’s all you can ask of an owner. He gives us the opportunity and then you’ve got to go to work. He’s been great so far.”

Clarke and Coachman hope that more players will arrive in town in the coming weeks before the team’s training camp, which it hopes to open on Nov. 30.

Bullard joined the Wolves after playing three seasons at SUNY Canton. A centerman, Bullard scored five goals and assisted on three others in 10 games with Wolves after making his pro debut on Feb. 1.

A native of Ballston Spa in the Albany area, Bullard worked various jobs during the offseason, often commuting some 100 miles from Ticonderoga just to be able to skate.

“I actually worked at a restaurant in Ticonderoga and I was working at a car garage up there as well and when I came back to Saratoga, I was working for a moving company for a little bit just to try and put some money away the best that I could.”

Kalpouzos, 23, who grew up in the Toronto area, played 13 games with Roanoke of the SPHL last season, also spending time in Watertown.

“Like most of us don’t really know too much about it, it’s hard for me to have a really strong opinion,” Kalpouzos said of the coronavirus situation. “It’s just kind of keep doing what we’ve been doing, training, skating, prepping for the season. Because even Clarkie and everyone else, we can’t control what happens with the virus, so we’ve just got to do what we can do and be ready to go when the time comes.”

There are several former SUNY Canton players who hope to attend Wolves training camp, including forward Max Routledge and goalie Austin Washkurak. Former Wolves and SUNY Canton player Joe Deveny was traded by the team to Port Huron in the offseason.

Hildebrandt said that the team conducts temperature checks before each morning check to be vigilant with COVID-19 precautions.

“There’s a saying that ‘if you stay ready, you don’t have to get ready’” Bullard added. “So I think that’s kind of the mind-set that everyone’s taken, just to stay as mentally prepared, physically prepared as possible and treat it like we’re going on Dec. 18.”