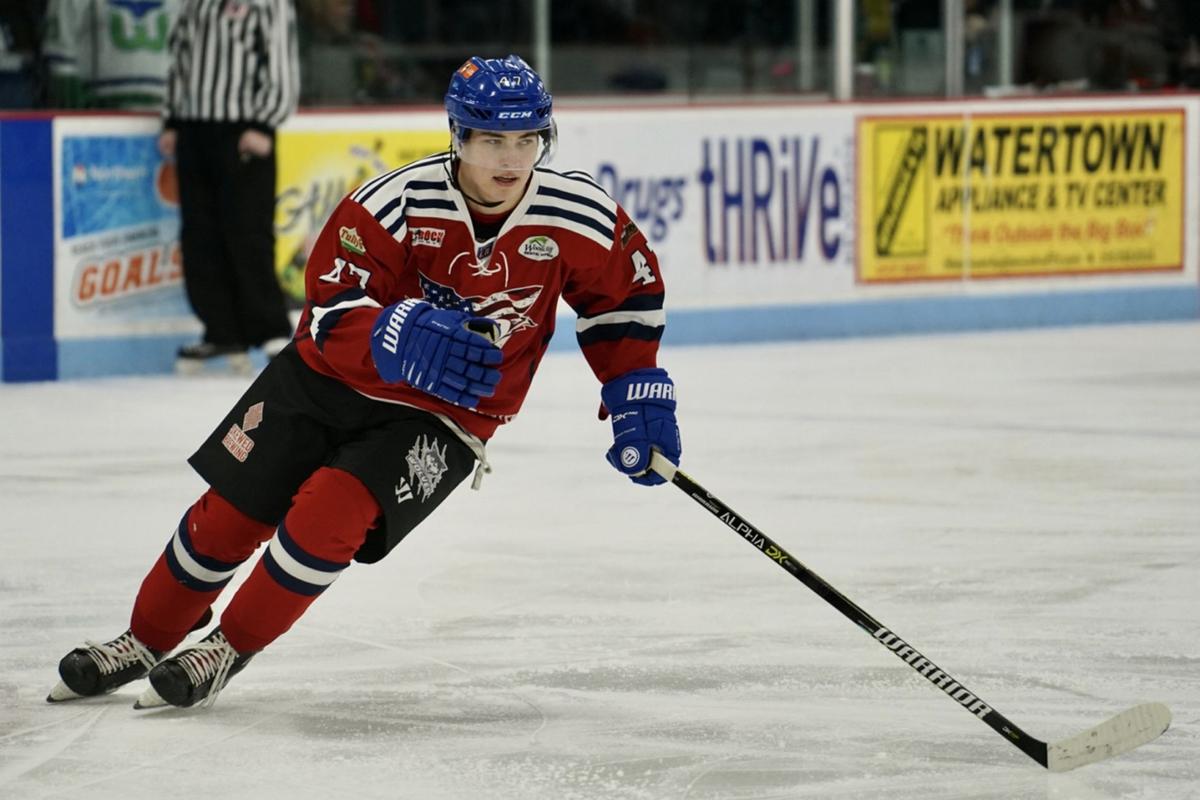 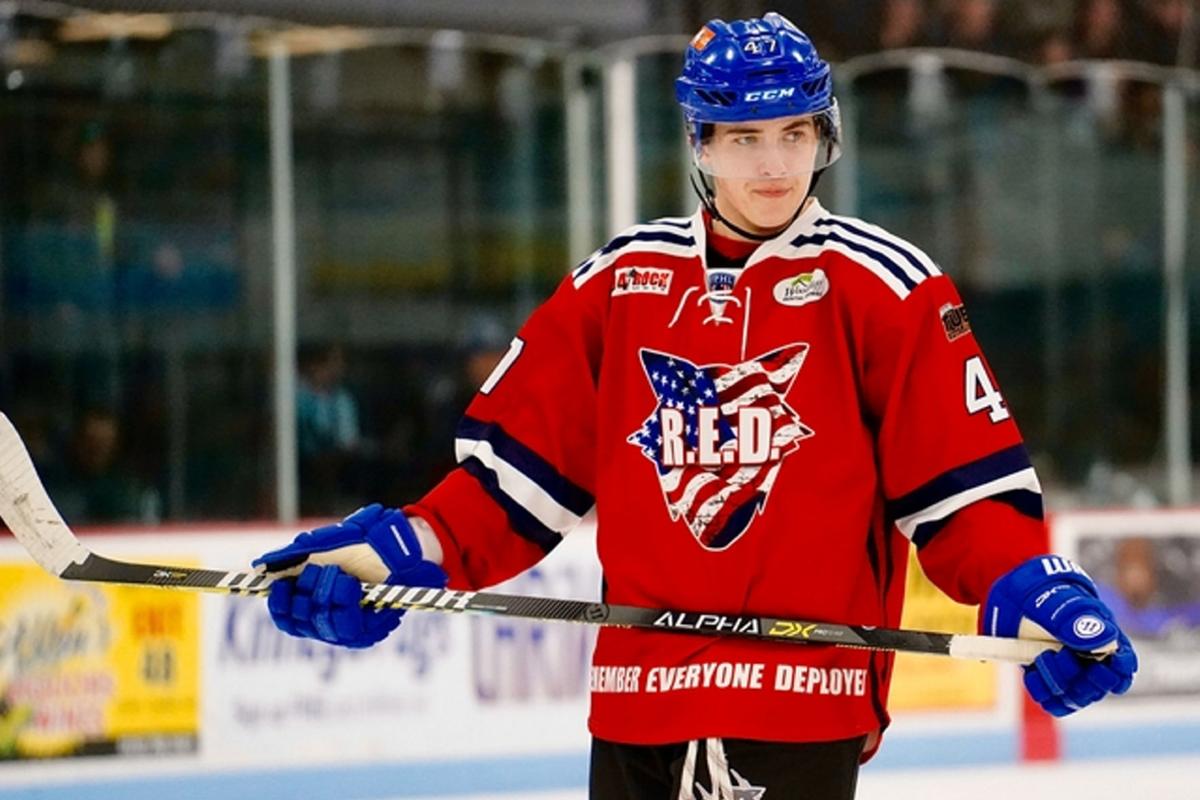 Watertown Wolves rookie forward Dominik Bogdzuil looks on during a game against the Delaware Thunder on Dec. 27 in a Federal Prospects Hockey League game at Watertown Municipal Arena. PHOTO PROVIDED

Watertown Wolves rookie forward Dominik Bogdzuil looks on during a game against the Delaware Thunder on Dec. 27 in a Federal Prospects Hockey League game at Watertown Municipal Arena. PHOTO PROVIDED

WATERTOWN — Dominik Bogdziul is enjoying his time in the north country, especially with the Watertown Wolves.

Bogdziul, who grew up close to the water in Liepaja, Latvia, a town on the Baltic Sea in northern Europe, can relate to the cold winters here.

“It’s right on the Baltic Sea, which is bigger than Lake Ontario,” the 21-year Bogdziul said. “The weather is the same, we just don’t get as much snow. I like it here.”

A speedy forward with a knack for scoring, Bogdziul continues to fit in with the Wolves in his rookie season with the team.

Heading into the weekend, Bogdziul stood fifth on the team in scoring, generating 33 points, including scoring 16 goals and 17 assists in 27 games.

“He’s come along really well,” Watertown Wolves coach Paul MacLean said. “He showed some good signs right away, he’s putting the puck in the net. He’s got good speed, he’s got a good release, he has the ability to get open and make an impact.”

Bogdziul and the Wolves will host the Elmira Enforcers at 4 p.m. today at Watertown Municipal Arena, which will be the third game in as many days between the two teams.

“It’s kind of like a rivalry weekend,” Bogdziul said. “It’s probably going to be our playoff matchup, so we’ve got to treat it like a playoff game.”

Bogdziul began this season playing in Sweden, skating in seven games before the opportunity opened up with the FPHL in Watertown.

“I feel better now,” Bogdziul said of his season. “At the beginning it was a little bit different, because I had to transition from a European rink back to (North American) rinks. Because I started out in Sweden on the bigger ice.

“For a couple weeks it was like tough, but then I got into it and my game is going better and better now.

“We’re just getting ready for playoffs and stuff like that.”

Bogdziul continues to skate on a line with fellow rookies Joe Deveny and Tyler Bullard.

“Our line, I like it because we’ve got chemistry,” Bogdziul said. “And Joe and Tyler, they played together in Canton, so they know each other.”

Bullard centers the line, with Bogdziul and Deveny on the wings.

“I think we bring like speed and we play well in the zone and make plays offensively,” Bogdziul said. “All three of us have good speed and good vision and good hands, and we can shoot the puck. I think this will be a big weekend for us.”

Bogdziul hasn’t been a stranger to playing hockey in North America. He played the better part of the past four years playing at the junior level in the United States, including last season with the Utica Junior Comets.

He played at that level all across New York State, including in Rochester, Binghamton and Syracuse, as well as a stint with a team in Texas.

“I like what I see here, this is a really good experience for me,” said Bogdziul, who was coached in Utica by former Thousand Islands Privateers coach Paul Kelly.

Born in Lithuania, Bogdziul and his family moved to neighboring Latvia when he was a youngster.

“We moved to Latvia and we live like right on the sea, it’s windy sometimes,” he said. “I moved there when I was nine and my parents still live there.”

Bogdziul says the sport of hockey continues to grow in both countries, citing NHL veterans Dainius Zubrus and Darius Kasparaitis, who are both from Lithuania.

“In Latvia it’s bigger than in Lithuania, because in Lithuania we only have like four hockey teams,” he said. “And in Latvia, they have a KHL team, which is a good league, it’s like the second league after the NHL.

“So it’s growing,” Bogdziul said of hockey in Latvia. “My good buddy Rudolfs Balcers, he was playing in (Ottawa’s organization) last year, but now’s he’s like in Belleville in the AHL because he got injured.”

Now Bogdziul is trying to make the best of his opportunity in the pro ranks with the Wolves this season.

“I would say so,” Bogdziul said of feeling at home in Watertown. “I know a lot of people around this area, too. This is far away from home as I’ve come like halfway around the world, so it’s pretty special.”

After Watertown plays at Elmira on March 12, the two teams will square off the next week by playing four games against each other in four days.

BOUDREAU ROOKIE OF THE MONTH

Wolves forward Deric Boudreau was selected as FPHL rookie of the month for January.

Boudreau totaled 22 points, including seven goals, in 13 games during the month for the Wolves. He recorded at least a point in all but one game over this stretch, capped by scoring three goals in a 4-1 win against Battle Creek on Jan. 31 for his second hat trick of the season.

Today’s game against the Enforcers is the start of a seven-game homestand for the Wolves.

Watertown will host the Delaware Thunder next Friday and Saturday, the league-leading Carolina Thunderbirds Feb. 28-29 and the Port Huron Prowlers March 6-7, all at 7:30 p.m.