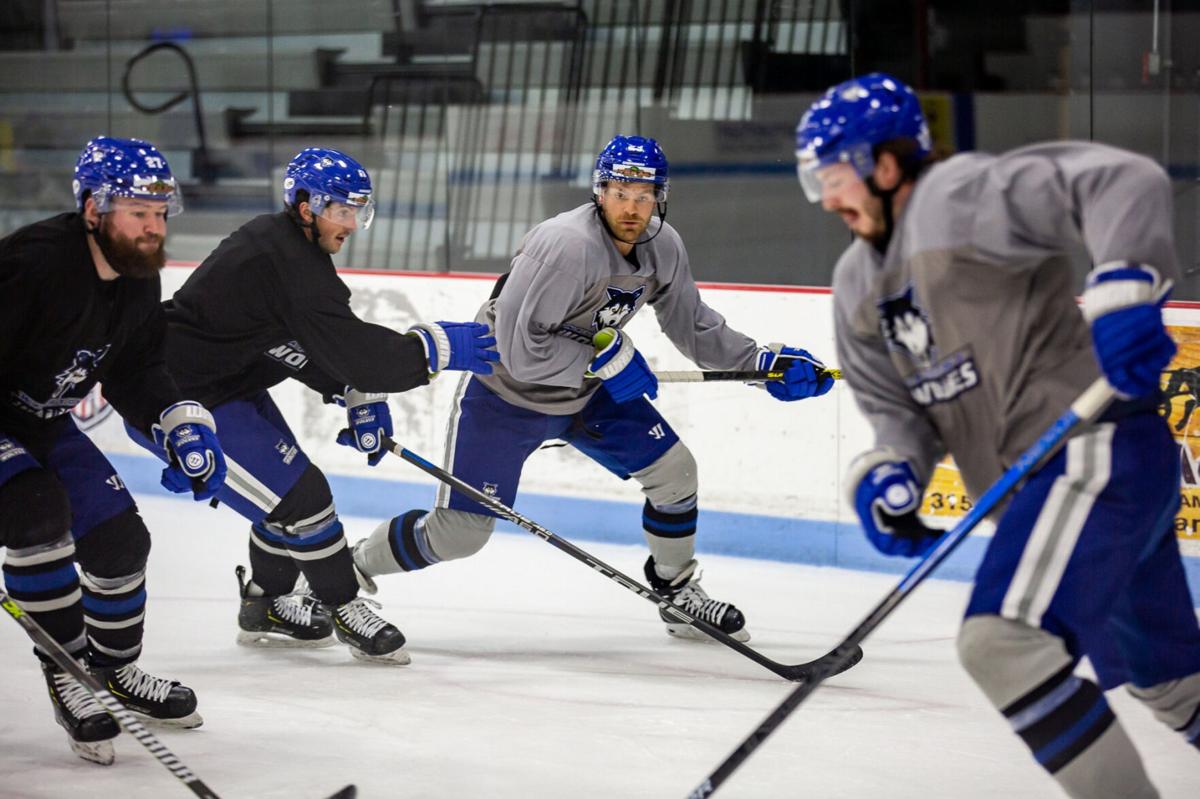 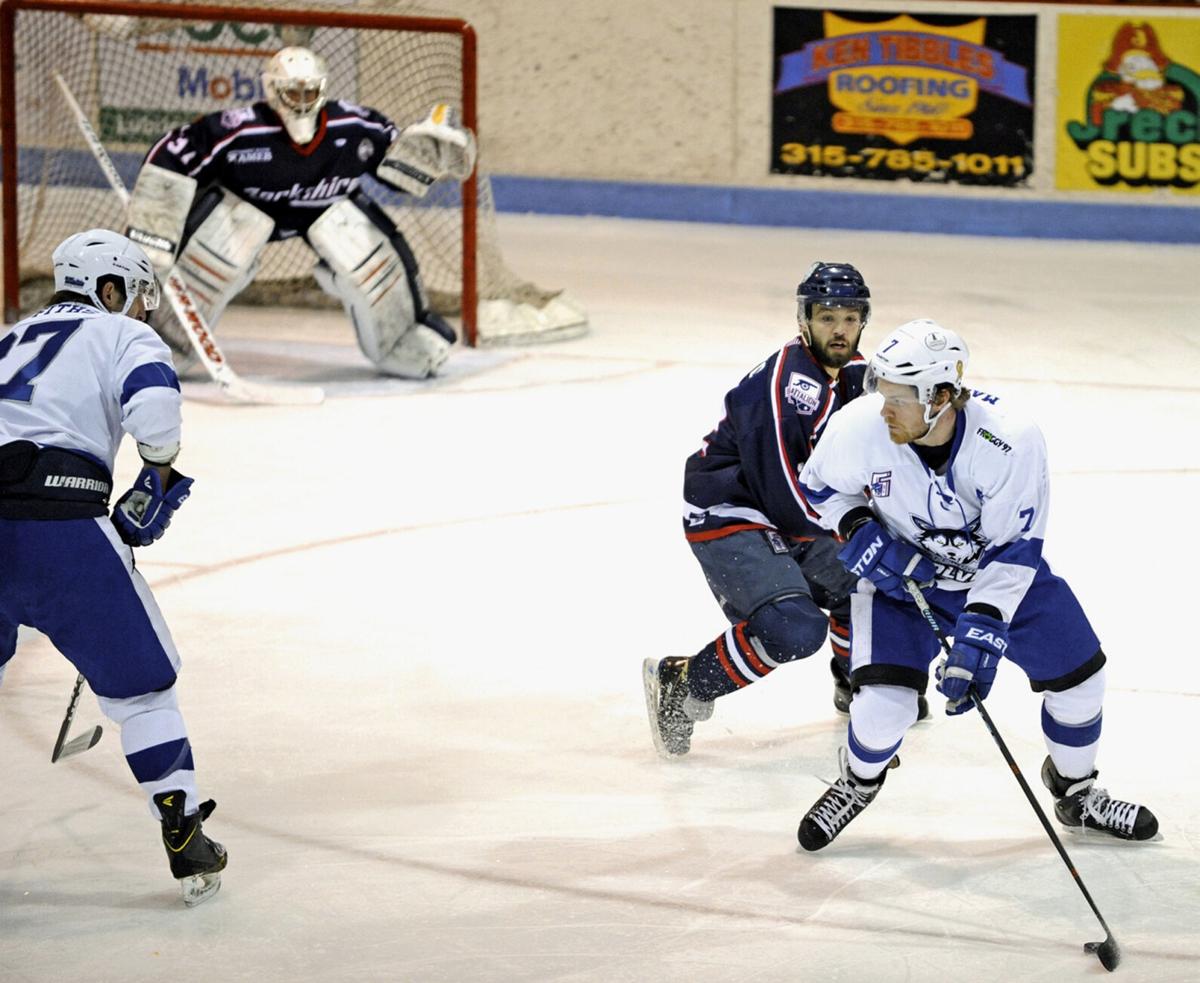 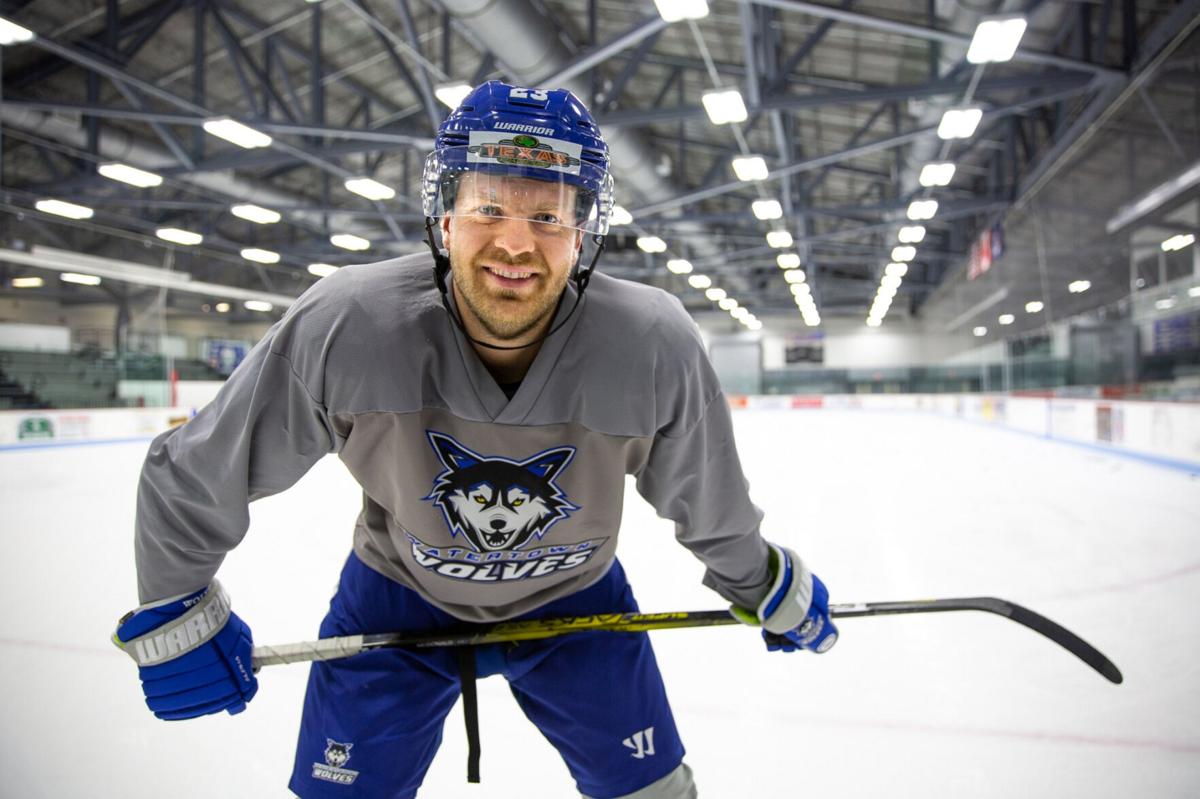 Justin MacDonald is looking forward to his role as Watertown Wolves’ team captain. MacDonald skated for the Wolves back in 2014-15. Kara Dry/Watertown Daily Times

Justin MacDonald is looking forward to his role as Watertown Wolves’ team captain. MacDonald skated for the Wolves back in 2014-15. Kara Dry/Watertown Daily Times

WATERTOWN — With training camp opening this week, the Watertown Wolves have turned to a familiar face to lead the team into this season.

Justin MacDonald, who played on the franchise’s inaugural team back in the 2014-15 campaign, will serve as the Wolves’ team captain, the team announced last week.

“I’m glad to be back,” MacDonald, 31, said. “Obviously we all would have liked to be here last (season), but it was an unfortunate outcome. But it just leads to a bigger buildup this year, right? We can turn that negativity into a positive.”

MacDonald, who also played for the Thousand Islands Privateers, will also serve as an assistant coach with the Wolves this season.

“I love it, (head coach Brent Clarke) has already given me new roles and I’m really looking forward to it,” MacDonald said. “It’s different now, I’m like helping with sales, I’m helping with day to day operations, it’s something different. I’ve played for 10 years, let’s try something a little different while staying in the game.”

Watertown will open its training camp Monday at Watertown Municipal Arena, with its season opener on Oct. 29 against the Binghamton Black Bears in Watertown.

After MacDonald played in 29 games with the Privateers in the 2012-13 season, he and head coach Brent Clarke went on to win a league championship with Pensacola of the Southern Professional Hockey League later that season.

“Back in the day I was the one that started helping him get some tryout camps because we knew he had it in him when he was younger,” Clarke said of MacDonald. “He went from juniors to pros and broke in here and (I) happened to win a championship with him in Florida. And our paths crossed a few times, he played for me originally in 2015 with Watertown and he went up to the ECHL and the rest is history.”

Two seasons later, MacDonald played in 46 games with the Wolves in their first season in the Federal Hockey League, totaling 102 points, including 44 goals, and Watertown went on to win the league title.

“It’s good, there’s a lot of memories,” MacDonald said. “We won it here last time and last time the rink wasn’t updated like this, so I’m excited to see what it’s like when it’s full, so I’m looking forward to that.”

MacDonald went on to play for five teams in the ECHL, as well as one more in the SPHL before playing overseas in Sweden during the 2019-20 season.

A versatile forward, MacDonald normally plays as a centerman, but can also play wing.

“He brings everything to the game,” Clarke said. “Just by having him on the ice and in the rink, it gives a lot of confidence to our squad and what we have, and makes everybody better around him.”

“I’m anticipating some great linemates and as long as they can finish, we’ll be scoring goals,” MacDonald said.

MacDonald and the Wolves are looking forward to this year after their season last winter never got started in bizarre fashion.

With the Federal Prospects Hockey League’s season delayed until February because of the pandemic, the Wolves played three preseason games against rival Elmira and were poised to open their regular season on Feb. 3.

But after pregame off-ice incident between the two teams, Elmira never came out onto the ice for pregame warmups at Watertown Municipal Arena and ended up forfeiting the game.

“Again, with how it all happened, I wasn’t there, I was one of the guys in the (locker) room,” MacDonald recalled. “I just knew something was off when they didn’t show up on the ice. But that’s in the past now, we’re moving on from that.”

MacDonald was set to return to the ice for the Wolves at the start of the abbreviated season that never happened.

“Not only the winter, but it’s a whole summer thing, you’re in training,” MacDonald said. “Some people think you can just show up, but it takes a lot of time and effort out of your day, this is what you want to do for your living. You can be working from 9 til 5, but you chose to do this.

“So when the job that you want to do is taken away, it’s kind of like — really?”

This left both MacDonald and Clarke disappointed after the team held several training camps over the course of several months in anticipation of a season.

“It sucked because we had a great team and everybody was like brothers in there and we were only together for a short time,” Clarke said.

MacDonald went on to play 22 games with Huntsville of the SPHL as well as two playoff games with the team last season.

“Fortunately I was able to go play elsewhere, but some of the players weren’t, that was the end of their season,” MacDonald said. “Some people only play for a couple years, some people play from like 15 to 20 years, and eventually there’s a time when that’s it. So, you’ve got to take every year, have as much fun and play as hard as you can and try to win. By the end of the day, that’s all we want to do.”

After commencing training camp this week, the Wolves will hold an inter-squad scrimmage game on Oct. 21 at the arena before hosting a preseason game the next night in Alexandria Bay.

On the day of the Blue and Gray scrimmage, the team will hold a season ticket pick-up party with the game to follow at 7 p.m. The game is open to the public for $2 a ticket and season-ticket holders are admitted free. Children will be admitted for free at the preseason game with tickets available at the door.

“We have a lot that are up right now in the SPHL because of the lack of players,” Clarke said of the Wolves’ training camp contingent. “So we’ll see some of those guys back a little later on, but as of right now we’re still looking pretty strong.”

Clarke is optimistic about the level of talent the Wolves possess entering camp, but is still never satisfied with on-ice product.

“I think everyone’s in the same boat right now with players, I think there’s over 100 players right now in the SPHL,” Clarke said. “It kind of diminishes you a little bit, so you have to re-recruit, but as long as you have the right pieces, you’re fine.”

Much has changed on the hockey scene in Watertown since MacDonald last played with the Wolves, including the refurbished Watertown Municipal Arena.

“It’s different, bigger,” said MacDonald, a native of Newmarket in southern Ontario. “So I can only imagine that the fan base has been growing. We had people standing all the way around because there were no seats, and now we have the seats, we’ll be able to pack more people in. So I think it’s going to be very exciting.”