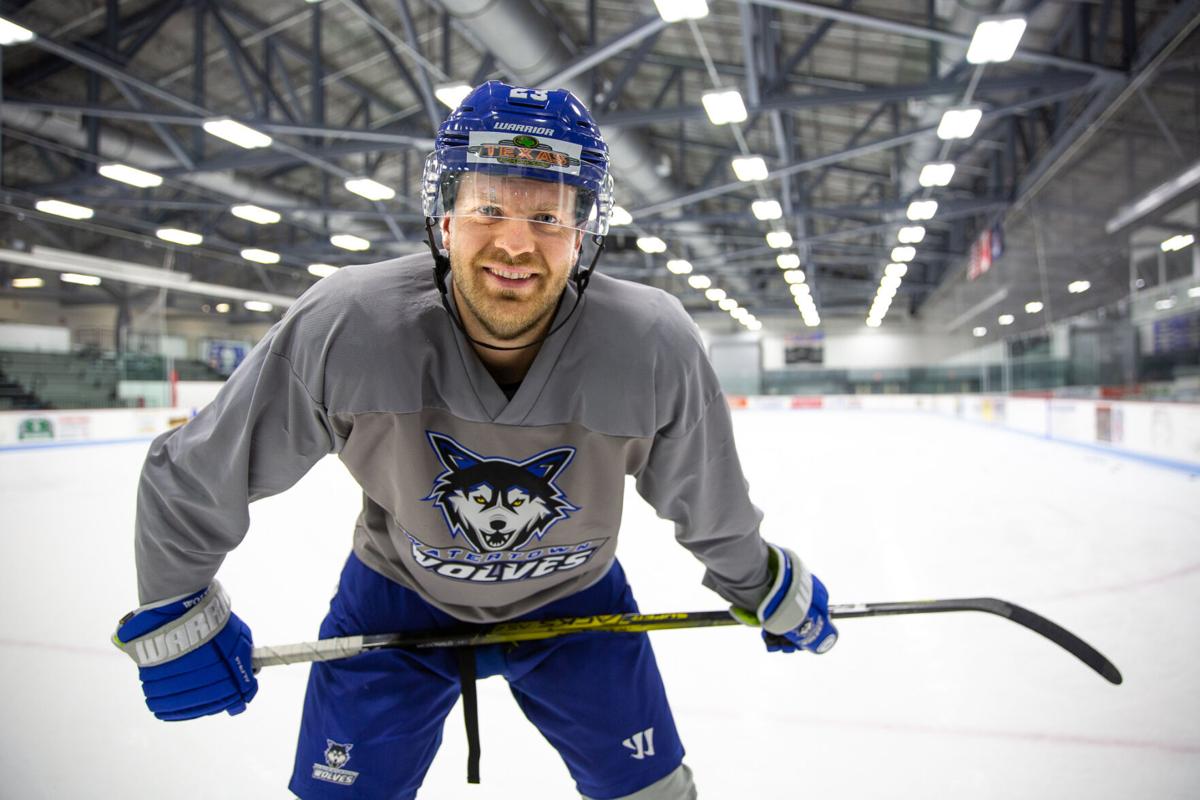 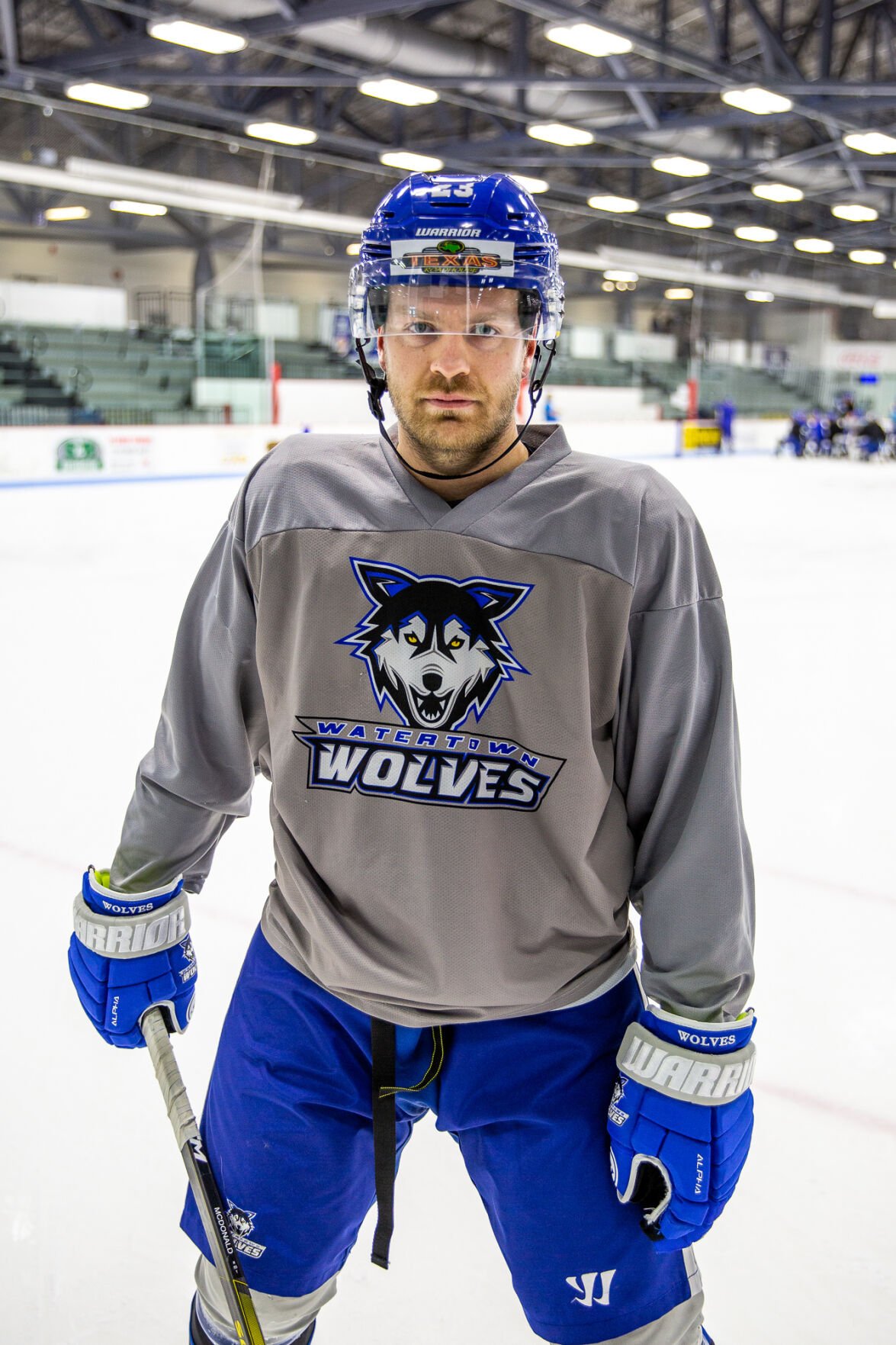 WATERTOWN — Entering his 10th season of pro hockey, Justin MacDonald brings a world of experience to the Watertown Wolves.

The second oldest player on the Wolves’ roster, MacDonald, 30, played last season in Europe for the first time, in Sweden.

With his career dating back to the 2011-12 campaign, MacDonald played for the Thousand Islanders Privateers team in his second pro season and two seasons later played on the first Watertown Wolves team.

“I don’t have a lot of memories per se, but there was an awful lot of winning,” MacDonald said of his time in Watertown. “The fans were great back then and unfortunately now it’s going to be a different atmosphere, but you’ve just got to make your own atmosphere and momentum.”

A veteran forward, MacDonald will be in the lineup when the Wolves open the Federal Prospects Hockey League season by hosting the Elmira Enforcers at 1 p.m. today at Watertown Municipal Arena.

“I’m really looking forward to this,” said MacDonald, a native of Newmarket, Ontario. “I’m not going to just settle for anything in my life right now. This is exciting.”

After initially playing for Watertown, MacDonald went on to play mostly in the ECHL, as well as the Southern Professional Hockey League, playing in seven different states over the span of eight seasons, from Mississippi to Florida to Indiana and back to Northern New York.

“He’s a very experienced guy, he’s played all over the place,” Watertown coach Brent Clarke said. “He’s been up and down and we’ve been together before, we’ve been linemates, we’ve played together, you name it, we’ve done it together. So it’s nice to have him.”

“I met a lot of great people here; I played with some great players,” MacDonald said. “I’ve played with Brent, he’s coached me. So I knew when he gave me the opportunity and I got a good offer compared to what other leagues were giving me, it was a no-brainer.”

MacDonald and Clarke each won a championship with the Pensacola Ice Flyers of the SPHL in 2013. During that season, MacDonald split his time with the Florida team and the Privateers.

“He’s had great success, he knows how to win and he’s had a great career,” MacDonald said of Clarke. “So if the players listen to him, they’ll advance as well.”

MacDonald then played on the inaugural Wolves team, which was coached by Clarke in 2014-15 and which won the league title, the Commissioner’s Cup.

“He was a big part of that,” Clarke said of MacDonald’s contribution to the Wolves’ first season.

MacDonald played 46 games on that season’s team, totaling 102 points, including 44 goals. But he didn’t experience the championship first-hand as he was called up by Evansville of the ECHL before the then FHL playoffs.

“(Clarke) said, ‘Do you want to come here? You’ll be able to play 40 minutes a game,’” MacDonald said of his first stop with the Wolves. “And I was like, ‘Absolutely, I want to play as much as I can.’ I came here and we had the best team, they won it that year. I left just before the end of the season to go to the ECHL, but he (Clarke) helped me develop and get to that level.”

Now MacDonald returns to Watertown as a seasoned veteran, known as a playmaker and scorer, as well as a leader.

“I like to create a lot of offensive opportunities,” MacDonald said. “Whether it’s myself or my linemates scoring, it’s a goal. Hopefully, feed someone the puck, get the puck to the net, crash and bury it. It doesn’t matter who scores, as long as we win at the end of the game.”

“We went to the conference finals with Fort Wayne (in 2017-18 season) and I ended up in Atlanta and we lit it up there and did well,” MacDonald said.

“I had surgery and decided to try overseas in Sweden,” MacDonald said. “Great experience, I didn’t know what I was getting into, but they were very accommodating, they gave me everything that I basically needed. It’s a different game over there, a lot more ice as they play on Olympic ice. Less contact, more skill with the puck, so it’s just different.”

Now with that experience under his belt along with his previous campaigns, MacDonald joins this Wolves’ team equipped to lead. Only Wolves team captain Fred Hein, also 30, is older than MacDonald, by only three months.

Hein, who totaled 56 points, including 29 goals in 45 games last season for Danville, was acquired by the Wolves in the offseason. Forward Tanner Hildebrandt has played for both Watertown and Elmira, and forward Ryan Marker scored 42 goals in a combined 42 games with both Elmira and Delaware last season.

“We seem like a good group,” MacDonald said. “We do have to work on like systems and quick passing and what not, but I think we have a couple great offensive skaters and it seems like they’ll be able to make that one move to get the puck to the net. A couple really good shots.

Among Wolves’ rookies, forward Jeff Koepplinger collected three goals and an assist in three preseason games against Elmira, and scored twice in the shootout round, including the decisive goal, in a 5-4 Watertown win on Sunday.

MacDonald continued: “There’s a toughness, which is always good, you always need to play with that little bit of edge.”

The Wolves and Enforcers are gearing up to play the FPHL’s first regular-season game since March 12.

The two teams last met during the regular season in Elmira, with the Enforcers prevailing, 4-3.

Four days later, the FPHL canceled the remainder of its season as well as the playoffs because of the coronavirus pandemic.

Watertown and Elmira, which have built a rivalry in just two seasons, are currently the only teams playing in the league because of coronavirus concerns.

The two teams are scheduled to play one another 16 times during the month of February, including in Watertown at 7:30 p.m. Thursday.

The Wolves and Enforcers will also square off in Elmira at 7:05 p.m. on Friday and Saturday.

Because of state guidelines concerning the coronavirus, spectators won’t be allowed to attend games in either city. For now, fans can watch games on the Wolves’ YouTube channel.