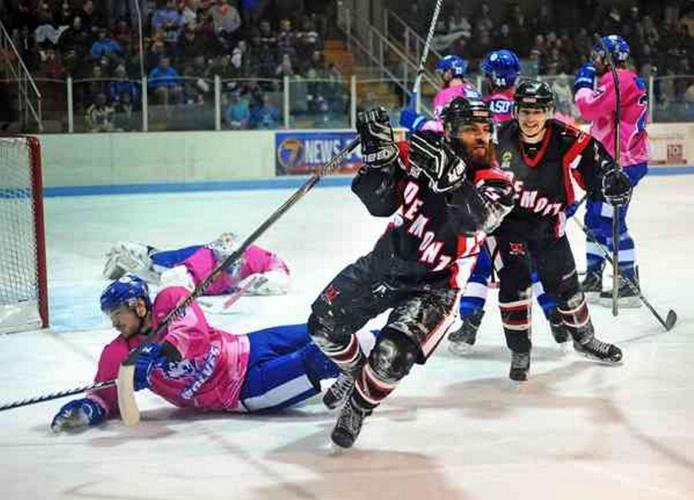 Ahmed Mahfouz, shown celebrating after scoring a goal against Watertown while playing for Dayton in 2015, is hoping to help guide the Wolves to another Federal Prospects Hockey League title. Watertown Daily Times 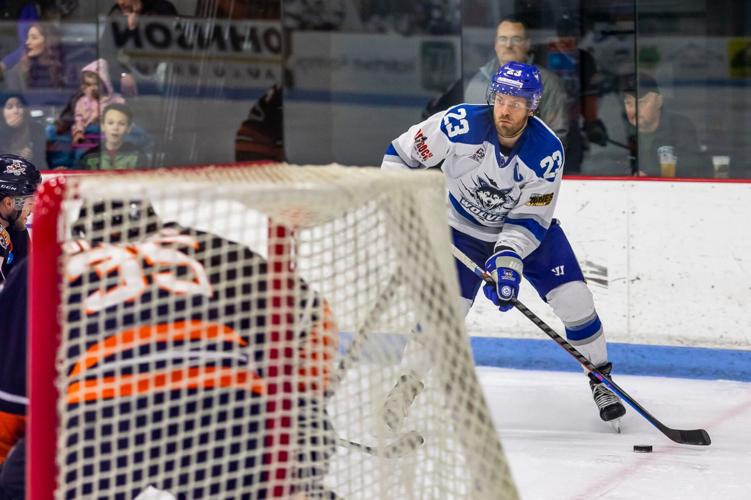 Watertown’s Justin MacDonald looks across for an open teammate during a March 23 game against Danbury at Watertown Municipal Arena. Kara Dry/Watertown Daily Times 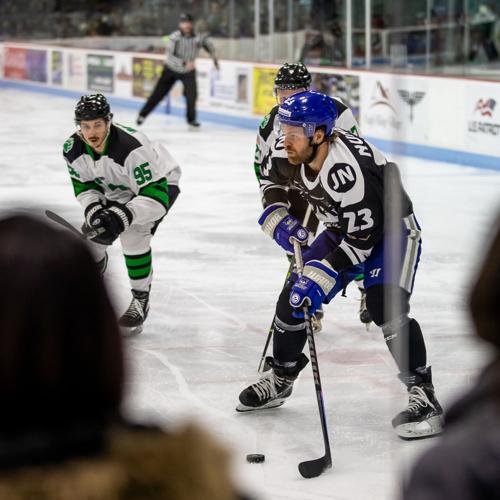 Watertown’s Justin MacDonald looks for a pass near the goal during a March 4 game against Binghamton at Watertown Municipal Arena. Kara Dry/Watertown Daily Times 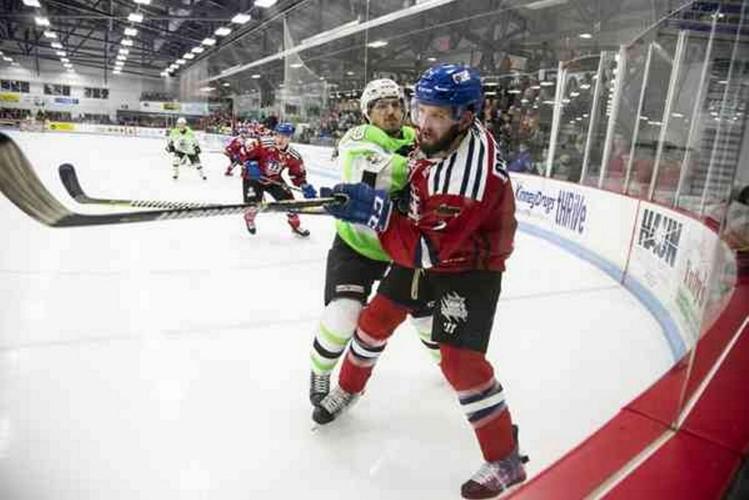 Ahmed Mahfouz, shown celebrating after scoring a goal against Watertown while playing for Dayton in 2015, is hoping to help guide the Wolves to another Federal Prospects Hockey League title. Watertown Daily Times

Watertown’s Justin MacDonald looks across for an open teammate during a March 23 game against Danbury at Watertown Municipal Arena. Kara Dry/Watertown Daily Times

Watertown’s Justin MacDonald looks for a pass near the goal during a March 4 game against Binghamton at Watertown Municipal Arena. Kara Dry/Watertown Daily Times

WATERTOWN — Ahmed Mahfouz is the Federal Prospects Hockey League’s ultimate warrior in his 12th season in the circuit.

The hard-nosed and gritty forward is one of several seasoned players, including team captain Justin MacDonald, who are leading the Watertown Wolves into the playoffs.

Mahfouz himself has experienced a storied career as he’s won three titles — all with three different teams.

After receiving a first-round bye, the top-seeded Wolves open the postseason at the Carolina Thunderbirds at 7:35 tonight. The best two-of-three semifinal series then shifts to Watertown with the second game at 7:30 p.m. Saturday and a third game, if necessary, at 7 p.m. Sunday.

“That’s the best part of having that bye in the first round is we’re playing a team that played two or three games in the first series and they have a quick turnaround themselves,” Mahfouz said. “I think we’re in a pretty good spot and we’re confident in that dressing room, at this point it doesn’t matter what the situation is, the bottom line is that we get that job done.”

Watertown, which ran away with the league’s regular-season title, is in quest of winning its third Commissioner’s Cup.

“We have a lot of character, a lot of young guys are going to be really anxious,” MacDonald said. “As short as the playoffs are, they’re also fun, so you can’t be gripping the stick too tight, there’s lots of time to score goals and you don’t change your approach. You’ve just got to have fun out there.”

Mahfouz has played on the league’s first title team with Akwesasne in the 2010-11 season, with Dayton in 2013-14 and most recently with Port Huron in 2015-16, back when the league was known as the Federal Hockey League.

“This is a chance for my fourth in a different city,” Mahfouz, 33, said of potential title. “And you know, that’s what we play for is the championships and the rings and the memories that come with it. We all start out as teammates at the beginning of the year and we turn into family. And the family that’s the closest, tightest group is the team that’s going to hoist that Cup.

“So I’ve got confidence, everybody loves each other in that dressing room like a family and we’re going to get to work for each other.”

Mahfouz joined the Wolves in January as he was reunited with head coach Brent Clarke, who also coached Mahfouz on several other teams, including the Elmira Enforcers.

“I’ve had him for four years, he’s an elite player,” Clarke said of Mahfouz, a former longtime nemesis of Wolves as well as Thousand Islands and Watertown Privateers teams of the past. “This is probably his last year, he wants to go out on a high and we’ve got some good players like Jimmy Lodge and MacDonald, the list is endless with our players. I think we’ll be in a good spot.”

Clarke guided Watertown to its first league crown in the franchise’s first season in 2014-15.

MacDonald played on the Wolves in 2015, but didn’t experience the title as before the playoffs was been called up to the Evansville of the ECHL after totaling 102 points, including 44 goals, in 46 with Watertown.

The 11-year veteran has forged a career season by scoring 60 goals — both a franchise and league season record, and generating 117 points, also a franchise mark.

“It was a good season personally, but at the end as a team, the team comes first,” MacDonald, 31, said. “We all have personal goals and I was happy enough to accomplish some of them — and our next big goal is to win a championship.”

MacDonald and rookie forward Alexander Jmaeff have teamed up as the league’s most potent scoring combination this year. Jmaeff has totaled 91 points, including 48 goals, in 50 games.

“He’s having one heck of a year, that guy has all the talent in the world,” Mahfouz said of MacDonald. “He’s a great leader, he’s a great captain for this dressing room, he does whatever it takes for the boys to be successful.”

“It was getting that first one kind out of the way, your first year, first championship — I don’t think many people can say that,” Coachman said. “I’m excited for getting another one here, as long as we work hard, put a full playoff effort in, we should be good.”

That season, Watertown also played Carolina in the semifinals, winning both games in overtime to advance to the final. After the Wolves defeated the Thunderbirds in the first game in Winston-Salem, N.C., both teams then traveled by bus to Watertown, with the Wolves winning in double overtime the next night.

“It’s very exciting,” Coachman said of playoff hockey. “The fact that we didn’t have a season last year, we were all kind of itching to get back. We’ve got a great team here and a great chance, so I’m real excited to get back to the playoffs.”

Carolina rallied from one game down to defeat Binghamton, 2-1, in a first-round series, with the Thunderbirds winning 4-3 in overtime Tuesday to complete a series sweep.

“Look at the games this week, the games have been exciting to watch online with the other teams playing,” Clarke said. “They’re a tough team, they just won a series and they’re coming off a high. “We’re hungry to go into Carolina and just do our job.”

Watertown won six of eight meetings this season against the Thunderbirds.

While playing for seven different teams in his career, Mahfouz has watched the league evolve over the years.

“The game’s changed in every league, it’s just not this league, there’s lot more speed in the game, maybe a little less bit physicality, and that’s something that there was a ton of in the first couple years of this league,” Mahfouz said. “I was fortunate enough to play on probably the toughest team that’s ever laced up the skates in this league, Akwesasne, in my second year we had countless number of guys that were there for a job and the game’s definitely changed. There’s not as many fights as there used to be.”

Now Mahfouz, who won a Commissioner’s Cup as a rookie, hopes to finish off his career by winning a title with Watertown in what he believes will likely be his last campaign as a player.

“With Akwesasne, we’ve got a lot of rookies in that dressing room and I just told them as an older guy I was fortunate enough to win a championship in my first year and there’s no better feeling than winning it in your first year,” said Mahfouz, who has played in 38 career playoff games. “It just starts your career off the right way. (There are) guys in that dressing room who are trying to win it the first time as a rookie and there’s guys like me that are trying to win it the last time as a vet.”