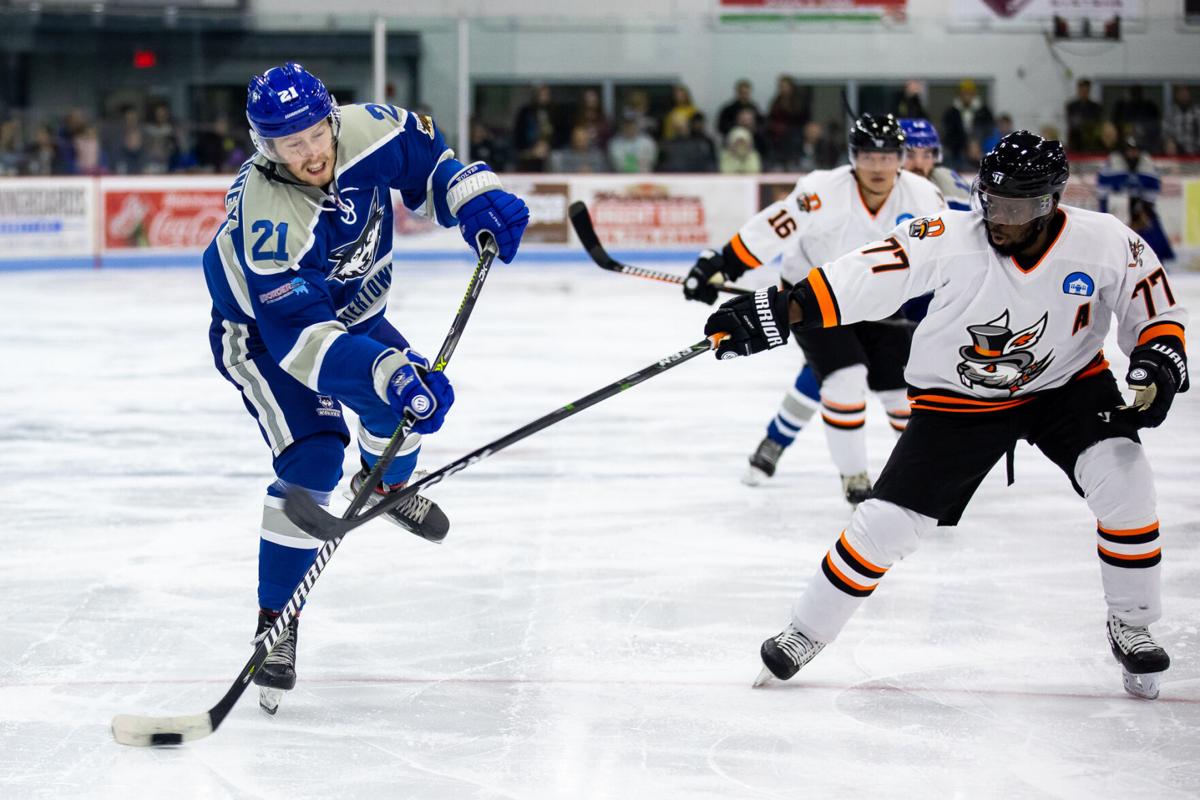 The Watertown Wolves’ Cole McKechney attempts a pass in the second period of Friday night’s game against the Danbury Hat Tricks at the Watertown Municipal Arena. Kara Dry/Watertown Daily Times 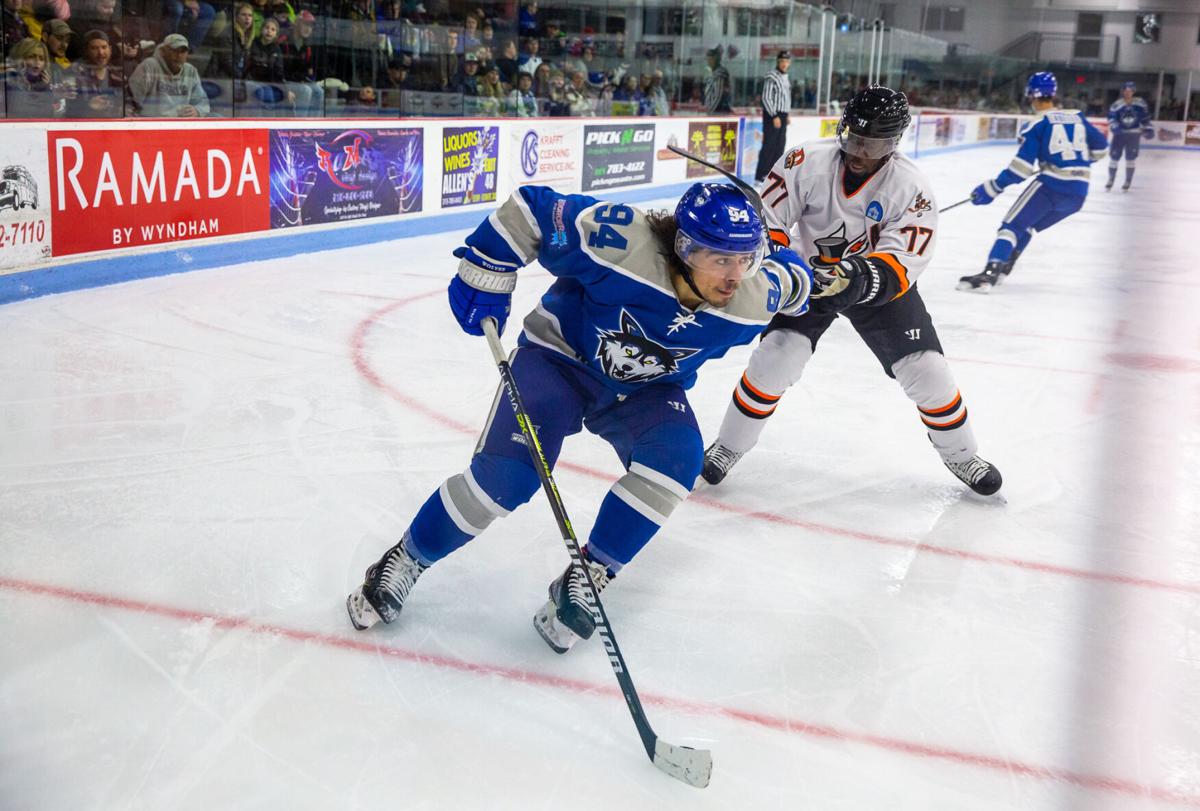 The Watertown Wolves’ Michael Mercurio looks for an out in the second period of Friday night’s game against the Danbury Hat Tricks at the Watertown Municipal Arena. Kara Dry/Watertown Daily Times 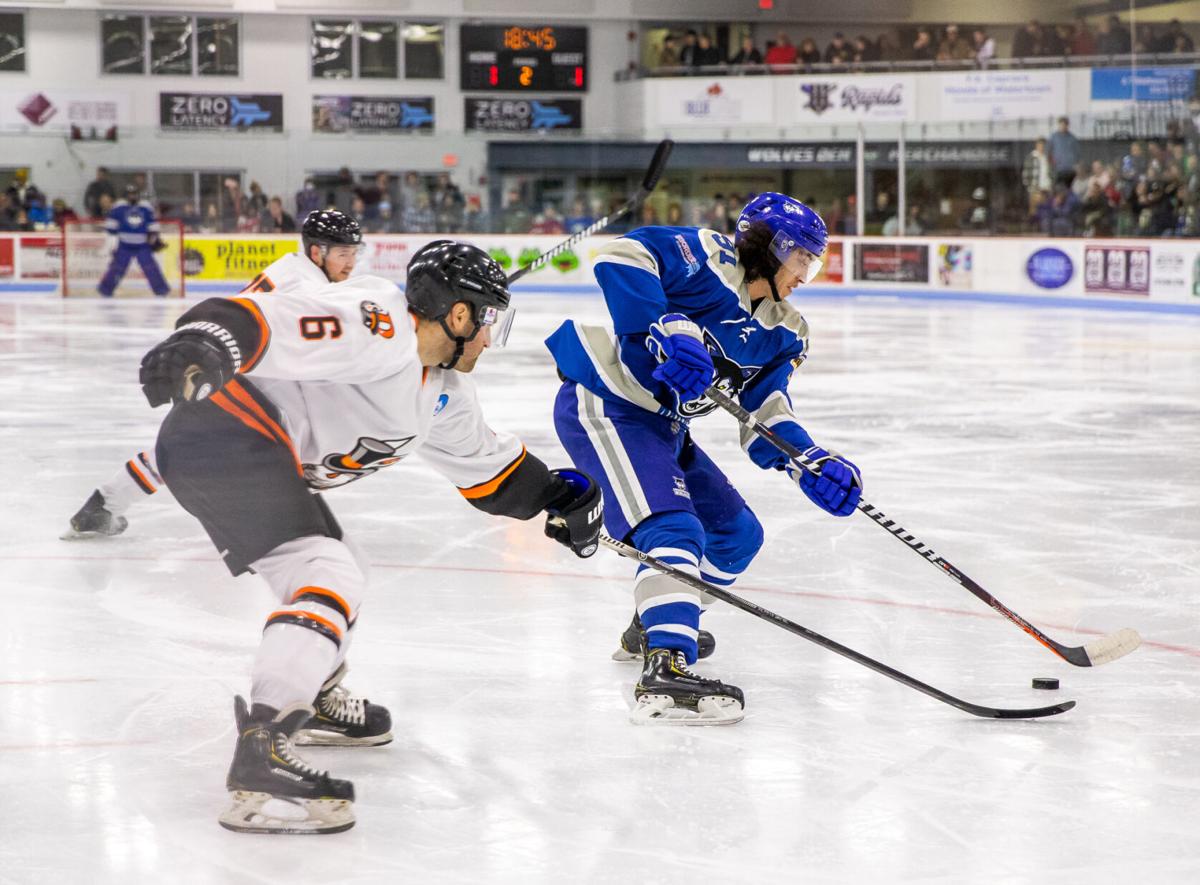 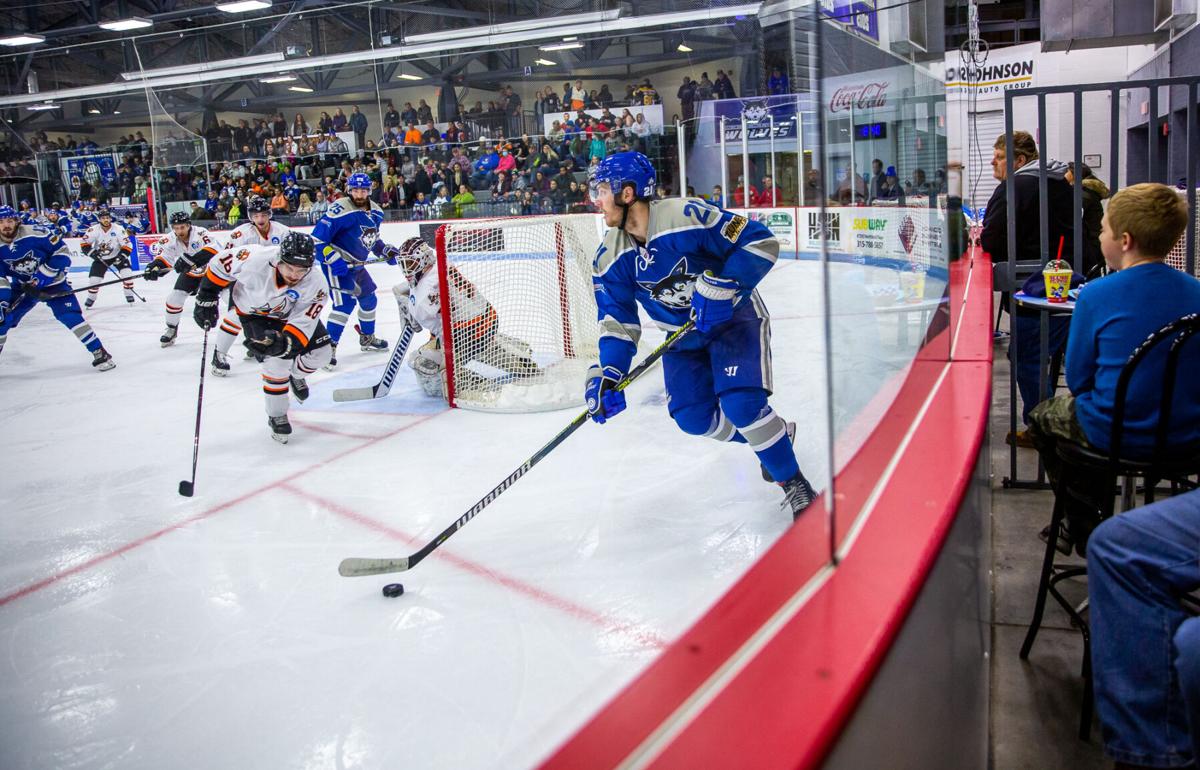 The Watertown Wolves’ Cole McKechney attempts a pass in the second period of Friday night’s game against the Danbury Hat Tricks at the Watertown Municipal Arena. Kara Dry/Watertown Daily Times

The Watertown Wolves’ Michael Mercurio looks for an out in the second period of Friday night’s game against the Danbury Hat Tricks at the Watertown Municipal Arena. Kara Dry/Watertown Daily Times

WATERTOWN — The Watertown Wolves went to extra time for the first time this season Friday night and were victorious, thanks to rookie Michael Mercurio.

Mercurio scored the tying goal in the third period and followed with the game -winner with two minutes remaining in overtime to lift the Wolves to a 5-4 triumph over the Danbury Hat Tricks in a Federal Prospects Hockey League game before a crowd of 1,003 at Watertown Municipal Arena.

“It’s a great feeling,” Mercurio said. “Honestly, that was a huge win in front of a great crowd tonight, they were really loud. It’s exciting.”

First when trailing by a goal, Mercurio pulled Watertown even at 4-4 with his goal with 6:53 remaining in regulation, with Justin MacDonald assisting. The tally came just 40 seconds after Dmitry Kuznetsov had provided Danbury with its first lead of the third period.

“J-Mac made a great play there,” Mercurio said. “He got that defenseman wide and slid it under his stick and it was another easy one for me, when they’re setting me up like that. It’s a lot of net to look at.”

Then in overtime, with both teams skating 3-on-3, Mercurio beat Hat Tricks goalie Frankie McClendon, with Cole McKechney assisting.

“Cole made a great pass, he was on his back and he slid it right to me there in the slot,” Mercurio said. “I don’t even know what happened really, I haven’t got a chance to watch it yet. The goalie was down, I had a lot of net to shoot at and luckily it went in.”

“It was great, I think it was just a matter of time for him,” MacDonald, who totaled four points on the night, including three assists, said of Mercurio. “He’s a fast winger and we know that it’s going to work, speed kills. ... McKechney drove the net and Mike happened to follow the play up to get the puck and put it in the back of the net.”

Goalie Gregory Hussey made 29 saves, including one in overtime, for Watertown (5-2).

Mercurio, a rookie, has now scored four goals in five games with the Wolves.

“He’s huge, he’s been a pretty good impact player since he’s been here with a lot of speed,” Watertown head coach Brent Clarke said of Mercurio. “He’s a smart player.”

“It’s been great, honestly, we’ve got a great group and that was a big win for us,” said Mercurio, a native of New Hartford.

With the team shorthanded with three of its players serving suspensions, Clarke returned to the ice as a player.

“We were short players, I think both teams were short,” Clarke said. “It was a good game I thought and it was a nice win.”

“We battled a lot of adversity, obviously with Clarkie in the lineup coaching and playing, that was awesome,” Mercurio said. “We had a lot of guys step up, it was just a really great atmosphere and we had to get that one.”

Clarke was in the starting lineup, lining up on left defense — one of 15 skaters who played for Watertown.

“Old and slow,” Clarke said about how he felt playing on Friday. “I used to have four or five gears out there and now I have neutral and one. And I had never played one shift of defense in my life, so it was an experience.”

Kuznetsov scored three goals for Danbury (3-3), which entered the night leading the league based on winning percentage.

The Wolves returned home after faring 3-1 on a road swing over the past two weeks. They also avenged a 5-4 loss at Danbury on Nov. 10. Watertown now sits in a tie for second place with Danbury.

On Friday, Danbury’s Cory Anderson scored 45 seconds into the game on the very first shot, Watertown drew even on Lucas LaBelle’s goal from the slot with 9:17 remaining in the opening period.

After the Wolves outshot the Hat Tricks 20-6 in a penalty-free first period, Johnny Bonta provided Watertown with a 2-1 edge with his goal 1:18 into the second period.

Danbury drew even on Kuznetsov’s unassisted goal 6:41 into the period, capitalizing on a Watertown turnover in close.

After Kuznetsov scored 1:20 into the third period, MacDonald followed with the tying goal 6:39 into the period to pull the Wolves even at 3-3.

“It was a track meet, you don’t want to get into games like that, but they’re always fun once in a while,” Mercurio said. “They do happen, so you’ve got to enjoy it.”

The Wolves were again without veteran defenseman Justin Coachman, who was serving the first of a three-game suspension.

After Coachman served a four-game suspension after his actions on opening night, in his return last Saturday at Binghamton, he was suspended for three games after receiving a pair of game misconducts, including leaving the penalty box during a fight, as well as resisting a linesman from discharging his duties.

The Wolves’ Ryan Devine and Nolan Slachetka were also suspended for a game after receiving game misconducts.

Watertown and Danbury will complete the home-and-home series at Danbury at 7 tonight.

n NOTES: Hussey has now won four of five starts this season for the Wolves. ... Bonta’s goal was his first pro tally as this is his rookie season. ... Watertown outshot Danbury, 53-33, including 40-16 over the first two periods. ... Clarke previously played in a game while he was Elmira’s head coach during the 2019-20 season and played with the Watertown Privateers during the 2013-14 season before becoming coach of the first Wolves’ team the next season.